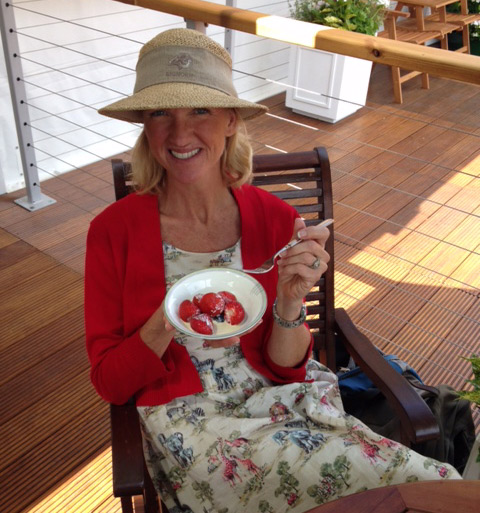 Just back from a successful Medjet trip to London to meet with our underwriters from Lloyd’s and for the first time stayed a few extra days to visit Wimbledon for the tournament. So if you’re a tennis fan here are some random Sunday musings:

–What ever happened to Bud Collins?

–The best job in the tennis world used to be a net-cord judge. All you ever had to do was raise your hand. Why don’t they exist anymore?

— How on earth did tennis ever come up with a Love-15-30-40 scoring system. Don’t pretend you know. You don’t. I get how golf became 18 holes- you can buy one of two tales – either there were 18 shots in a fifth of scotch and when it ran out so did the round. Or darkness hit out after the first ever 18 holes were played thus it was an 18 hole game. But tennis scoring makes no sense. And the French, who live in a world of amour, don’t even use love in their tennis verbiage They call it zero. Which I do understand.

–We were lucky enough to have two days of Centre Court seats at Wimbledon. You know you are someplace special when you walk into Centre Court after watching it on television for 50 years. It was as magnificent as I always imagined it to be. A shrine of the international sports world, no doubt. The aura though has been compromised a bit by the presence of the retractable roof. It may be practical but certainly not eye-friendly. Still very hair-raising to walk into the venue for the very first time. Even if you don’t have any hair.

–Our seats were a monarch’s toss from the Royal Box, much larger than you see on TV. The box seats about 50 royalty or royal-wanna-bees. Prince Phillip and Camilla Parker Bowles were front row. Wimbledon runs for a fortnight every year. What on earth do these people do the other 50 weeks?

–Centre Court is one of those venues that sounds on television just like it does when you sit there. Unmistakable, from the polite double-fault applause to rousing cheers on outright winners, but please get yourself under control before the next point is played.

–Been to three Grand Slam sites. The French Open at Roland Garros in Paris is like an international street fair designed to hold 1000 people and 1500 show up. The US Open in New York is like being at Times Square on New Year’s Eve and feeling like you are constantly walking against the flow of traffic. Wimbledon is a Sunday afternoon at Hyde Park, where everyone is so damn polite and proper, you’re ashamed just thinking a bad thought.

–On the other hand Augusta National and The Masters, which we were lucky enough to visit in April, is a pristine congenial police state.

–Don’t even think about wearing jeans to Wimbledon or The Masters. Nobody does. And while smart shorts are in order for Augusta, they are rare at Wimbeldon. The Centre Court crowd was jackets and ties or nice slacks and a stylish shirt. Ladies had skirts and dresses and those with hats were snappy. The players still have to wear white. I think I had the only Pittsburgh Pirates windbreaker on the grounds.

–The Masters rolls back concession prices. A buck for an ice cream; $1.50 for a sandwich; $1.50 for a Coke and a hefty $3.00 for a beer. Wimbledon doesn’t subscribe to that philosophy. Other than the obligatory strawberries and cream for about $4 conversion, the very British summer drink, Pimms, was all around for a USD exchange of about $12.00 a glass. You may also bring in your own bottle of wine. Can you imagine getting that through a bag check at a sports venue here? And though not prohibited, nobody brought food into Centre Court. A bag of candy was about all you saw. This would not work at the US Open.

–We got lucky getting tickets. We also got lucky as over two days we watched three of the big four in men’s tennis : a challenged Djokovic (try spelling that without Google), the melodramatic Nadal and the classy Roger Federer. (Andi took the pictures of the three posted.) We missed Andy Murray but got over that real quick.

–Wimbledon tickets, while you can get them, are pro-rata the most expensive in sport. Tightly controlled by lottery and the famous overnight queue for Centre Court and the other ‘show’ courts, you can legally buy re-sale ‘Debenture’ tickets which are owned by blokes that have paid hundreds of thousands of dollars to fund bonds The All England Lawn Tennis Club issues for capital improvements. For the two days we were there – second round matches- resale price was about 1200 pounds per ticket. After the horrendous US dollar exchange rate, they converted at about $2000 each which is higher than the Super Bowl get-in price. And that was only the first week. All remaining tickets in the 15,000 seat venue are cherished and prohibited by forfeiture from resale. The approach to the grounds are scalper free, so you better have your tickets in hand or head right to the long and winding queue.

–They publish a 26 page “Guide To Queueing” on the rules and regs of spending the night or showing up at 6 am on the whim you might get a ticket to the grounds. And in a very interesting twist, if you leave before the days matches have ended, you’ll be politely asked by the gate stewards to have your ticket scanned. They will resell your ticket to the next in queue with all those monies being donated to charity.

–Connections are key to snatching tickets. All of my international travel and business gurus turned up empty. My son Scott, in the hotel business, bailed us out with an British guest who knew a guy, who knew a guy, who of course knew a guy. It turned out to be wonderful ticket and hospitality accommodations; far beyond what I thought imaginable the later and more educated I got into this process. Nervous I was. The tickets arrived the day before our visit. Thank you lad!

–Henman Hill (or is it Murray Mound?) had much more character while standing on it then it does on television.

–England’s quick elimination from the World Cup assured there was more Cup chatter in the United States than across the pond. The Brits were resigned to the fact their side wasn’t any good. I did learn something interesting from the London press– other than the host country of Brazil, there were more World Cup tickets purchased by Americans than any other country. Pretty amazing for a sport that really doesn’t exist on our landscape but once every four years.

–We also got a chance to see Book of Mormon on London’s West End. Did anyone else who saw it enjoy it as much as we did?

If you haven’t guessed, after 17 straight June’s visiting London, I like the place. The Wimbledon experience put this trip at the top of the list.

And whatever happened to Ilie Nastase?