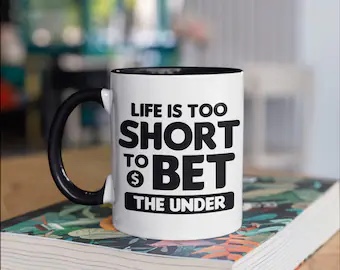 Joe Asher hasn’t had a losing season betting on football since 2008.

As the NFL slate begins in earnest today, he knows he’ll be hard- pressed to keep that 12-year streak alive.

Asher had a huge advantage over chumps like you and me who can’t string together two winning weeks, never mind a dozen years. He was a bookmaker. No, not one of the street corner guys with a Lucky Strike hanging from his mouth and a green visor below his forehead. Instead, Joe was a legal bookmaker, the kind you’ll find in virtually all of Las Vegas’ casinos.

“I didn’t play as much personally when I was in the business because we always had action,” the recently and perhaps temporarily retired Asher, 54, said. “I like to bet but by no means am I a huge player. Maybe now that I have time, I’ll play a little bit more.”

Since 2012 Asher was the United States CEO for British gaming giant William Hill. When Caesars Entertainment bought William Hill in April for almost $4 billion, Joe thought it was a good time to say goodbye to his 1,100 employees and take some time to stay home in Vegas with Cynthia and their three children. Additionally, and maybe not secondarily, the summer thoroughbred racing season was getting ready to open at Del Mar, just north of San Diego. Racing was, and still may, be Asher’s real gaming love. 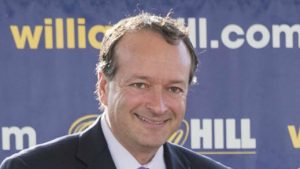 Asher at the helm of William Hill.

An attorney by trade, Asher probably knew he was destined for the gambling business. Growing up in Wilmington, Delaware, not far from the Bidens, Joe’s dad ran an in-town newsstand and would bet on just about anything. “My dad was a compulsive gambler and as a kid I was a stats geek, so I was always trying to help him,” the younger Asher remembered.  “It was a way for me to have something to talk about with him.”

Gambling was in his blood early, and just a few years after his bar mitzvah, Asher found himself working at Brandywine Raceway, the local Delaware harness racing track. At 16 years old he was in the publicity department. Two years later he become the track announcer at nearby Harrington Raceway.

He stepped away from the pari-mutuel windows long enough to get a degree at the University of Delaware and then was a magna cum laude graduate of Delaware Law School of Widener University. Admitted to the bar in Delaware and New York, he went to work for a prominent NYC law firm before moving to Nevada in 2006 to work on mobile gaming systems. In 2008 Asher founded Brandywine Bookmaking, opening a brand he called Lucky’s Race and Sportsbook in Elko and Reno, Nevada, before moving south and planting his flag at the downtown Las Vegas Plaza Hotel. When William Hill wanted to get a stake in US gaming in 2012, Lucky’s, with a dozen locations, became their buyout target. Wisely they kept Asher on as its CEO.

So, as we begin the next five months of high hopes and terrible frustrations, let’s ask Joe some questions preoccupying our football wagering minds:

What don’t sports gamblers know that they should?

“One of the biggest misnomers is that the sportsbook balances money lines, moves money and doesn’t have an interest in the games’ outcome. They do. If you move the line a half a point or a point, it’s not going to change what the public does, but it makes all the difference to the professional gamblers who, unlike the public, don’t have a rooting interest in the games other than making money. If the book is moving the line to try and attract a bet, say New England with Brady was playing the Jets, if the books moved the line a half a point, the public would still bet the Patriots. All you are doing is giving the professional bettor a game where he now sees positive value on the Jets. The novice doesn’t see that.”

“Yes. The public has a big bias on what they saw in last weeks’ games. That’s a mistake. The professionals look at the big picture and all the factors and variables. As far as I’m concerned, team travel is not properly taken into account. Coast to coast travel has always been a factor. The home team has a big advantage over a team traveling across the country for a road game. Getting acclimated to time zones is tougher than people realize. Additionally, you need to factor in the coaches’ reputations. For example, the knock on Andy Reid for 20 years has been clock management, take that into consideration. On the other hand, (Bill) Belichick has always gotten so much credit for in-game coaching. All that is a factor.”

Can I make money betting football? Well, not me, because I suck as a gambler, but can the common schmo sitting on the couch at home?

“The recreational player can win 50% of the time but that’s not going to be enough. The vig (laying $11 to win $10) takes a much larger toll than people realize. To overcome it you have to win just under 53% of your bets playing the same increments and that’s a heck of a lot tougher to do than people think. The casual player has a chance if they pick their spots, but most shouldn’t bet on football to make money, just to have an interest in the game. It’s very hard to overcome the math. You need to understand that. Just try and have fun. Discipline and money management gives you a chance but very few people have that or want to hear about it.”

When a game winds up on the spread, everyone says ‘Vegas knew what it was doing.’ Does Vegas really know what it is doing?

“Yes, sportsbook managers know what they are doing but that’s different than Vegas knowing what it’s doing. The fact a game lands on the number is more a reflection of the public and professional gamblers landing on that number, not necessarily the books. Remember, money bet moves the lines, not the book itself. Sure, some book managers are better than others, but everybody takes their lead from someone else which ultimately is a combination of money wagered from the public and the pros.”

Does the public tend to inflate lines with popular teams and overs/unders?

“Sure. In college football we know teams like Alabama, LSU, Ohio State and a few others will attract money and the lines will be inflated because of it. In the NFL we see it with the Packers and Chiefs or whoever is running hot. Professional gamblers love to bet the totals early in the college football season. The public also loves to bet the ‘over’ and the lines are inflated because of that. There is value normally to be found in the ‘under’ if you have the stomach for it.”

In 2018 the Supreme Court ruled that each individual state has the right to legalize sports wagering. So far almost half have. Are you surprised to see the recent expansion of sports gambling across the country?

“No. For years I said it will be legal across the United States, but I was not going to give a date. When (NBA commissioner) Adam Silver wrote an op-ed piece in the New York Times in 2014 endorsing it, that was the significant moment. That reflected a big shift from professional sports leagues who were historically opposed to gambling. A commissioner that is highly regarded supporting sports wagering was a game changer. That was the day I was comfortable that it would eventually change. However, there are things to still watch out for. Problem gambling will be a much bigger issue than some might think. The fact that it’s now legal and widely advertised creates a bigger risk for many people. I think it’s very important for the industry: the sportsbook operators, the leagues, the teams and the media to be on the alert for problem gambling.”

Will all these other states around the country hosting sports gambling cause a problem for the industry in Las Vegas?

“I don’t think it will be much of a negative for Vegas at all. Vegas will always have a place and be the place. It’s the major leagues, the big time. Las Vegas is the full experience. People come out here to bet football every weekend in droves. I have friends that come out every year from Delaware for the Super Bowl. They want the Vegas experience you can’t get anywhere else. If it was just about the betting they would stay home in Delaware. But it’s the dining, the entertainment, the revelry that you can’t get anywhere else. The more the industry grows across the country, I think the better it will be for Las Vegas.”

After all these years in the business, give me one tip betting football.

“My number one favorite betting angle has always been the home underdog in an NFL prime time Sunday or Monday night game. If there is coast to coast travel involved for the favored visiting team, double down!”

Thanks Joe for the insight. I actually feel like I have a chance this season.