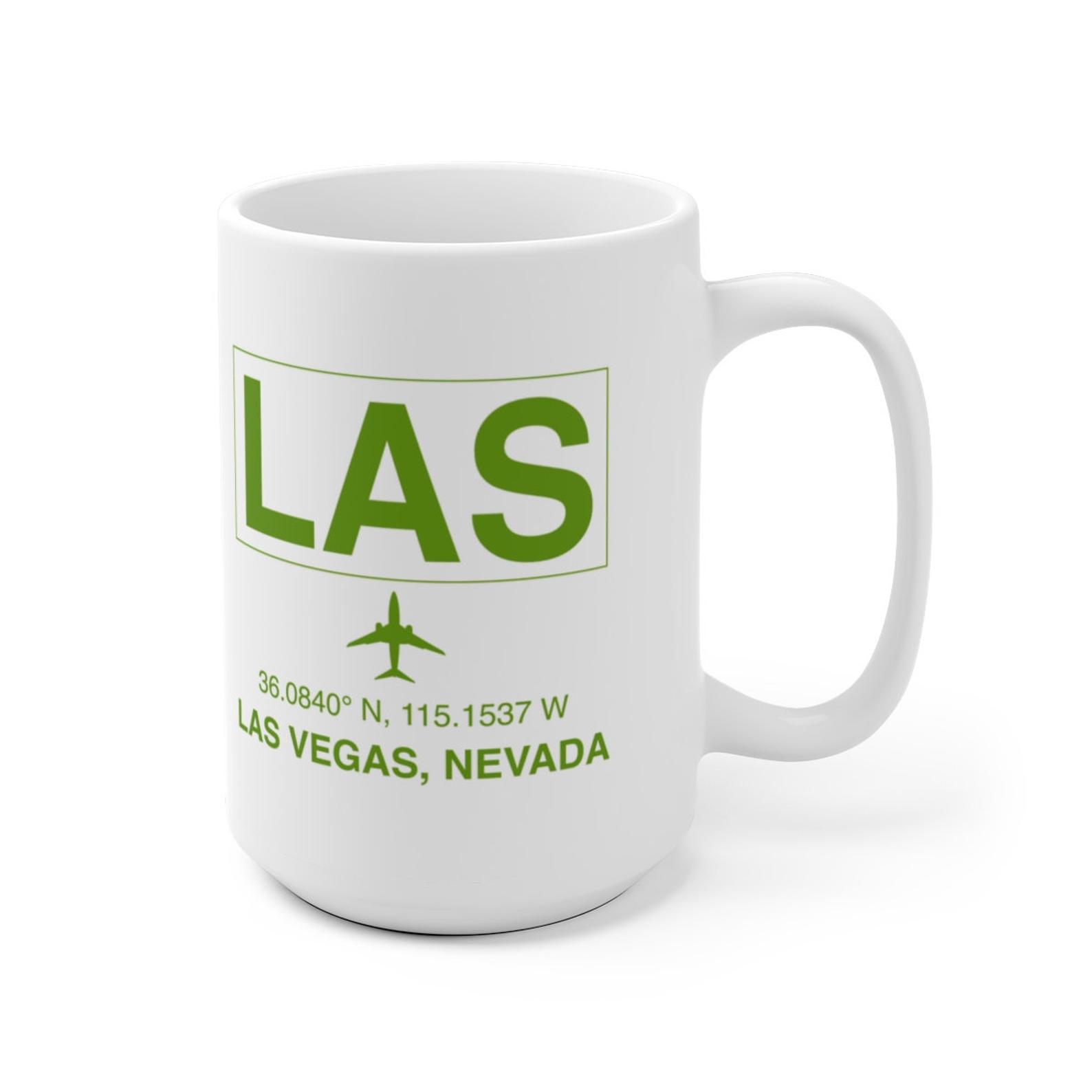 So, why Vegas? It wasn’t so much a question as an assignment.

Joe Brancatelli is a veteran business travel writer and is the founder and publisher of the very popular biz travel subscription website JoeSentMe.com. Very few people know more about the ins and outs and ups and downs of business travel than JoeB. He’s also a longtime colleague and asks me on occasion to contribute to his page. Sadly, he’s also a staunch Cleveland Indians fan. He’s the only Indians fan I know. At least the only one that openly admits it.

Joe asked me to write a piece that his readers  on the doorstep of retirement would want to know:  Why Las Vegas? It’s a question I’ve been asked more times than a blackjack dealer at Mirage hitting a 21 while you sit cocky and comfortable with a couple of kings.

Andi and I knew we would head west when the curtain finally came down on my career. We were in Birmingham, Alabama when I finished my 20th year as President and CEO of the medical assistance transport program, Medjet. We knew we’d head closer to both of our sons who live in Los Angeles. Birmingham is a wonderful place but it’s not family.

We also knew California wasn’t for us. A quadruple pox of traffic, cost of living, taxes and the dreaded Dodgers would send us elsewhere. We poked around a little bit in Palm Springs and Arizona but really found what we were looking for in the Nevada desert.

“Anything in the world we want do to is in Las Vegas,” Andi said during one of our multiple neighborhood and house hunting trips. “And” she added, “if we want to do nothing, it’s here too.”

Was she ever right. (That’s something she encourages me to say often.) We just finished our first year as Silver State residents and don’t second guess for a minute our retirement decision.

The Strip, always crowded and electric, doesn’t define Las Vegas anymore than Times Squares is all New York has to offer; minding the gap in Piccadilly Circus is London’s best or Bourbon Street is the soul of New Orleans.

Away from the bright lights, Las Vegas is a community. And while we have the same problems that large cities our size have, it’s a cohesive and caring community. Andi called it “vibrant.” If you’re here, chances are you came from somewhere else; native Las Vegans are as rare as a one-roll snake eyes on the dice table.

The population of Las Vegas metro is over two million and it grows daily. Add to it another hundred thousand passing through each week for holiday and conventions. It’s infrastructure, including McCarran International, can still support the population and visitor boom. Californian’s by the thousands relocate here to get away from insane living expenses. The city’s popular mayor, Carolyn Goodman, has not yet advocated for a ‘wall’ to stop the influx but the day may be coming.

We looked for about three years before deciding on Summerlin, about 18 miles northwest of McCarran and 10 miles due west of Bellagio. It is one of the two major bedroom communities in the valley. The other is Henderson, southeast of the airport. Both are highlighted by parks, golf courses, retail, dining and are extremely clean and friendly. In Summerlin, still part of the city of Las Vegas, we are the gateway to the stunning Red Rock Canyon, a nature, photo, trail riding and hiking paradise. Summerlin is a Howard Hughes masterplanned community of about 125,000 named after his maternal grandmother. Keep that tidbit in your Final Jeopardy! treasure chest.

Andi’s “anything we want to do” includes running down to the Strip a couple of times a month to see Paul McCartney, Aerosmith, Bruno Mars, James Taylor, Elton John and ZZ Top. ZZ Top was the best for no other reason than their show started at 7:30 and, bless them, were done at 9:15 pm. Twenty-five minutes later we were home in bed, as I assume they were. Last weekend I got a call from a friend who had an extra ticket to see the Eagles so that was an easy decision. Still on the calendar over the next couple of weeks is Willie Nelson, Lady Gaga, John Fogerty and Journey. Willie is 86; the over/under on the time his show ends is 8:55 pm. I’m all over the under.

Absinthe at Caesars is a must-see show when you come to town. We laughed with Sebastian Maniscalco, Adam Sandler and even ole’ Rich Little. Not so much for Piff the Magic Dragon. We grooved to a 60s show for my generation and an 80s show for Andi’s. We are season subscribers to the Broadway series at the gorgeous Smith Center, a terrific performing arts theater in downtown Las Vegas that unless you live here you’d never know exists.

It took us a little bit to figure out we didn’t have to do everything or we’d be exhausted and bust in no time. Now we pick and choose our spots — who we want to see, and where and when to dine. Gambling in a casino holds no appeal.

While Vegas was always an entertainment and dining hot spot it is making huge in-roads on becoming a sports mecca, too. The NHL came here two years ago with the Golden Knights and good luck getting one of the 17,000 tickets to a home game. In fact pre-season games, with standing room, draw over 18,000 fans at three-year-old T-Mobile Arena, neatly tucked in behind New York-New York and Excalibur. The skeptics said hockey would never work in the desert. Now it’s a love affair between the city and the team. A $2 billion dollar, 65,000 seat football stadium is being finished on the south end of the Strip for the Oakland, err Las Vegas, Raiders to move into next season. Naming rights to hometown Allegiant Air. The town is already in a frenzy counting down the days. College football playoffs, the Final Four and the Super Bowl will surely follow at Allegiant Stadium. A brand new 10,000 seat baseball stadium opened about two miles from our driveway in Summerlin for Oakland’s AAA team. With 9,300 fans a game, the Aviators led the minor leagues in attendance and just missed passing the Miami Marlins. UNLV still plays big time basketball but not as well as they once did. Their football program will be sharing the new stadium with the Raiders. The WNBA has been warmly received and it won’t be too much longer before the NBA, the sport tailor-made for Vegas, comes to town. The UFC is headquartered here and there is nothing like a heavyweight championship boxing match on the Strip — next one slated for November 23. The PGA was in Summerlin last weekend. If you’re a sports fan, soon there will be no better place on the map, if that’s not the case already. 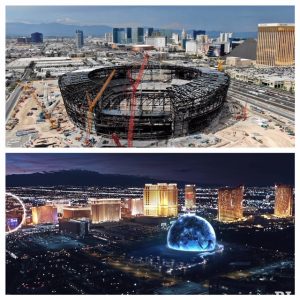 Allegiant Stadium will be ready for the Raiders and UNLV next season. The Sphere will change the Strip’s skyline in ‘21.

With T-Mobile Arena, MGM Grand Garden, Mandalay Bay Events Center, UNLV’s Thomas & Mack Arena, the Colosseum at Caesars and the brand new and phenominal Park Theater in the hotel that used to be Monte Carlo, no city has more super sized indoor venues sitting within two square miles of each other than Las Vegas, Nevada. Add to it a dozen large hotel showrooms. And if that isn’t enough then buckle up as Madison Square Garden is building MSG Sphere, which will add about 17,500 more seats for concerts and special events when it opens in 2021 next to the Venetian Hotel.

Dining is 24 hours and runs the gamut. Every celebrity chef is here and a whole bunch of others that want to be celebrities are too. It’s not cheap, bring plenty of cash. However, if budget dining is your thing you can still grab that $5.99 steak-as-tough-as-Kellyanne-Conway and eggs special at three in the morning on the corner of Sahara and Las Vegas Boulevard.

The weather, most of the year, is delightful. You may not be able to play golf or tennis everyday but you can play every week. Some winter days get refreshingly cold and the summer, which we just completed our first, is more than tolerable. Trust me, 105 degree temps in the desert, is far better than the 90’s in the deep South with matching humidity.

We were told, and soon found out, our home will be a popular guest destination. Our extra bedrooms work overtime. A wide array of relatives, friends and some who we hardly knew have passed through our front door. It’s actually been fun.

One year of retirement is in the books and no complaints. Okay maybe just one — Bruno Mars started his show at 9 pm. Who can stay awake that late?

So the next time someone asks me ‘Why Las Vegas?’ my answer will simply be ‘Why not?’