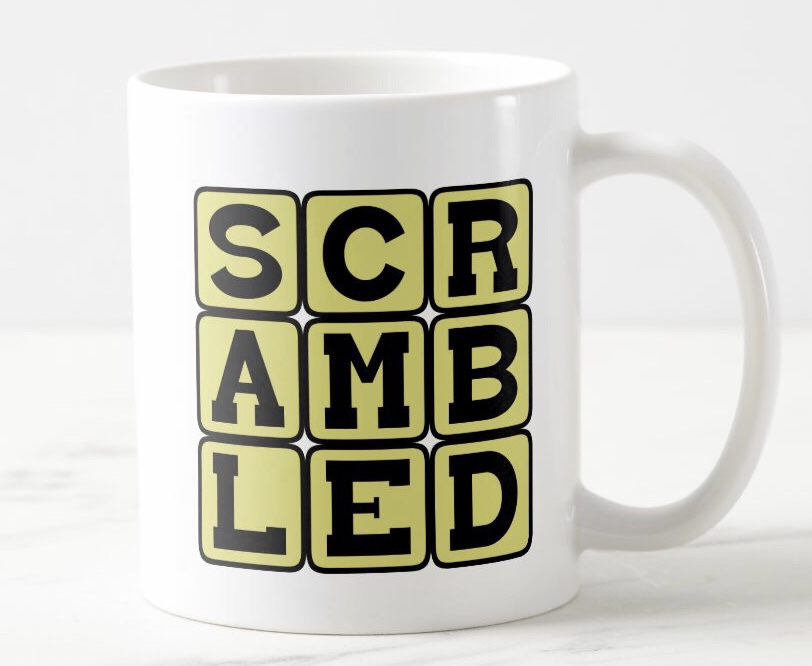 Let’s scramble up some random thoughts to go with our Mother’s Day eggs and Sunday morning coffee:

Say hey and happy birthday to baseball Hall of Famer Willie Mays who turned 90 on Thursday. As a kid I remember the grace with which he played the game. Smooth. Very smooth. Also celebrating birthdays on Thursday were Bob Seger, 76, George Clooney, 60 and me at sixty-nine. It looks so much younger spelling it out rather than using numerals, doesn’t it? 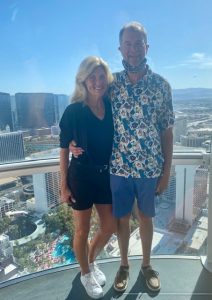 A birthday ride on the Vegas High Roller with my cool shirt and even cooler wife.

It was a great day, too. I had a goal of running two miles at the gym, up from the laborious mile and a half I run twice a week. These days I’m more Louie Anderson than Usain Bolt in my gait but that’s okay, not many others my age are running at any speed. It wasn’t easy but I did it. Andi and I then became tourists heading to the Strip to ride the High Roller, the tallest Ferris wheel in the world. It was uplifting. Then dinner at the new mob-inspired Bugsy & Meyer’s steakhouse in the Flamingo. Make a point of skipping it on your next trip out here. No respectable mobster would be shot dead in this place. If you must go and want A1 to compliment your steak bring an extra $5.95. We ended the day seeing magician-comedian Mat Franco. A fun day with a very special lady. We celebrated late into the night, not getting home until almost 9:20.

Here’s something I haven’t said in over 30 years — It’s exciting to be a Knicks fan again.

Maybe one day we can say that about being a Jets fan, too. The Jets seemed to have had a nice NFL draft last weekend but only the Jets can choose Michael Carter, a running back from North Carolina in the fourth round and then 44 picks later in the fifth round select Michael Carter, a defensive back from Duke. I only hope it was on purpose.

Explain this to me. Jacksonville knew they would have the number one selection in the draft since late December. Everyone knew they would choose quarterback Trevor Lawrence. Then how could they take all of their allotted ten minutes to make the pick? And to top it off, the Jags fired four senior members of the scouting department a week later. Strange.

Las Vegas you are now on the clock for the 2022 NFL draft. It will be three days of mayhem on the Strip as the lake at Bellagio and Caesars will be co-headquarters.

Vegas roared back in March with gaming win totals surpassing the $1 billion mark for the first time since February 2020. It was also the highest level in more than eight years.

Ever notice your car drives so much better after it’s washed?

It’s no accident Robert De Niro stars in just about every movie released these days. Since filing for divorce from Grace Hightower three years ago, De Niro had been paying $375,000 in alimony and support. That’s a month. A judge recently reduced the dinero the actor has to pay to a paltry $1 million a year. The couple had been married on and off since 1997. The court also ordered them to sell their $20 million residence in New York. At 77-years-old you gotta think this isn’t the way Vito Corleone envisioned riding off to the retirement ranch.

I’m not sure if this is good news or bad news. This week, I got elected to our synagogue’s Board of Trustees.

Here’s one activity we weren’t doing during the early days of the pandemic. The number of babies born in the United States in 2020 was the lowest since 1979.

Continuing the Reds under 81.5 season wins watch: A good turn since Cincinnati started like the ‘27 Yankees. A seven-game losing streak brought them back to earth and put me back in the game. Through last night they are 15-16. If this trends continues, they can play .500 ball the rest of the way and I’ll be happy. Win one, lose one. Even better, win one, lose two. The way to beat the Reds is to get to their bullpen. The earlier the better. It sure doesn’t help things however when their starter pitches a no-hitter as Wade Miley did on Friday night.

Miley’s no-no was the fourth of the MLB season and second of the week. John Means tossed one for the Orioles on Wednesday. The last time four no-hitters were pitched this early in May was in 1917. So far this season the pitching is way ahead of the hitting evidenced by a league wide composite batting average of a paltry .233.

Baseball has statistics for everything. I found this one particularly telling. For years announcers would tell us that a 2-1 count is a ‘hitters’ count and 1-2 was a ‘pitchers’ count. Stats compiled over time reveal when the batter has a two ball, one strike count and he swings at the next pitch he’s hitting .360. When the count is 1-2 and he swings at the next pitch, it drops all the way down to .160.

I may lose my membership in the baseball-purists club but the more I see of starting extra innings with a runner in scoring position, the more I actually like it and the resulting strategy on both sides of the ball. However, seven-inning doubleheaders have no place in the game unless, of course, the Reds are losing after seven.

As great and consistent as Albert Pujols has been through his 20 years in baseball, it’s tough to see the Angels just toss him to the trash heap.

Baseball is a physically demanding game, no doubt about it. Witness Oakland A’s left-handed pitcher Jesus Luzardo who is sidelined indefinitely after breaking the pinkie on his throwing hand. Got hit with a batted ball? Nah. Broke it after banging a table playing a video game.

Las Vegas’ hockey team, the Golden Knights, are good. In fact, very good. They, along with Colorado, are the co-favorites to win the Stanley Cup in only their fourth year of existence. You’ll remember three years ago, in their very first year, they made it all the way to the Cup finals. That stuff just doesn’t happen. The Knights recently completed their longest winning streak in their four years winning 10 straight games from April 9 until April 28. When the streak ended the Knights had played 283 games in their brief history. Conversely, the Detroit Red Wings have been in the league since 1932, played 6,556 games and have never won ten straight.

Mark Stone, the Golden Knights’ captain, is the epitome of sports leadership. On April 19, Patrick Marleau of the arch-rival San Jose Sharks played his 1,768 National Hockey League game surpassing Gordie Howe, as the all-time leader in games played. That accomplishment happened in Vegas in a game won by the Knights in overtime. As soon as the game ended, instead of skating over to congratulate his goalie, Stone did a U-turn and headed straight for Marleau asking him not to leave the ice until all the Knights had a chance to shake his hand. Classy.

The largest crowd to see an NHL or NBA  game in over a year was in Las Vegas Friday night with 7,950 on hand to see the Knights and St. Louis as Nevada has gone to a 50% capacity.

Exciting Kentucky Derby last week. Kudos to jockey John Velasquez, who, at age 49, outrode 18 younger kids to win the roses with Medina Spirit. It was the second straight Derby win for the Hall of Famer who also rode Authentic to the finish line in ‘20. Jockeys are athletes. Finely tuned ones. Smart too. They know not to bang on tables playing video games. As good as the Velasquez story is, goggles also off to Mike Smith, who, at 55, rode Midnight Bourbon to a sixth place finish. 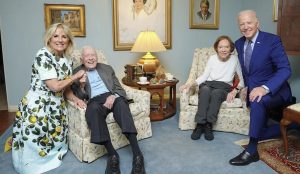 Photo op. Are the Bidens that big or the Carters that small?

Hats off to the Bidens who did what Presidents Clinton and Obama didn’t do and took time to visit Jimmy and Rosalynn Carter in their Plains, Georgia, home. President Carter had been all but shunned by the two Democratic administrations that followed him. Carter, now 96, never had a chance during his four years in office with inflation, the Cold War, the Iranian hostage crisis and energy shortage issues hampering his four years. He was fortunate in 1976 to run against Gerald Ford who couldn’t overcome his pardoning of Richard Nixon. Ronald Reagan beat Carter handily in 1980. Clinton and Obama viewed Carter as more of a hindrance than an asset during their presidencies. President Biden said of his visit with the Carters, “We sat and talked about the old days.” When you’re a combined 174 years old, there’s a lot to talk about.

Carter’s VP, Walter Mondale, died at 93 a couple of weeks ago. The Dems chose Mondale to run in 1984 against Reagan, an incredibly popular incumbent. For some reason Mondale accepted the nomination. Reagan barely squeezed out a 525-13 Electoral College win. Mondale, always a sad looking character, served his country and home state of Minnesota well.

Today is a special day. If you still have your Mom give her a hug and tell her what she means to you. Even if you can only do it virtually, do it. I wish I still could.