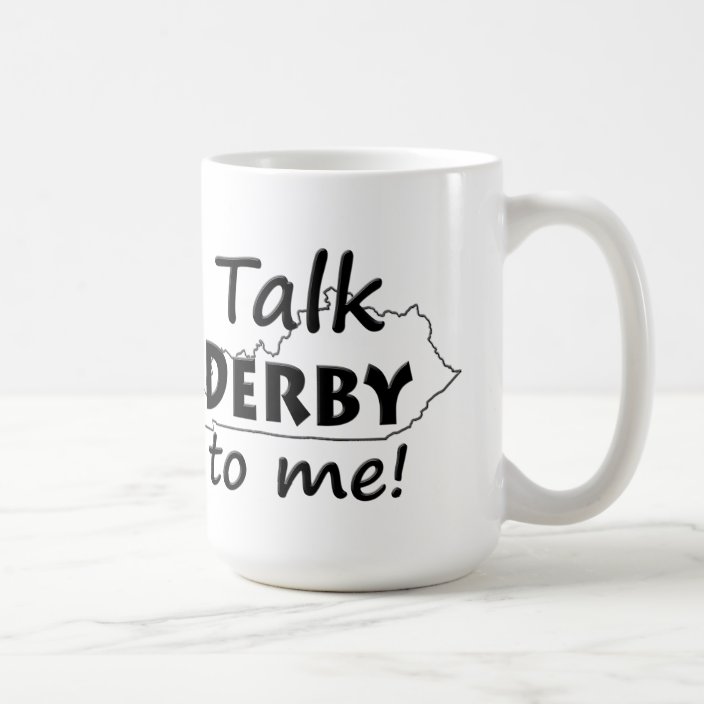 Only horse racing can make an episode of The Three Stooges seem like a PBS docudrama.

Horse racing, you’re at the top of the stretch and slip slidin’ away. It’s only a matter of time before you’re in the Yesteryear wing of the Smithsonian: jockey silks and a wagering ticket encased, right next to a Betamax, a pay phone and a daily newspaper. Fifty years from now a kid will point at the silks and ask, “Daddy, who wore those funny clothes?”

Last week’s word out of Churchill Downs about the potential of a drugged Kentucky Derby winner isn’t what the sport needs right now. In fact, short of an infusion of 20-and-30-year-olds, there’s not much left in the bullpen to bail out racing.

Ah, but once upon a time the racetrack business was strong and mighty. In the 1940s, 50s and even into the pre-lottery days of the 60s, horse racing, baseball and boxing ruled the American sports roost. Then came slot machines, casinos and the distractions of everyday life. Racing was never the same. Now racetracks are closing to become shopping centers and housing developments. Baseball has slipped behind football and basketball on the popularity ladder and boxing, well go ahead and tell me who the heavyweight champion of the world is. What’s that you say, Sonny Liston?

The news out of Kentucky last week was bad, very bad for the sport. The presumed Derby winner, Medina Spirit, tested positive for a substance that horses can’t race with in their systems in the Commonwealth.

So, yesterday in the Preakness Stakes, with the Kentucky test results still outstanding, we had a horse that might have won the Derby running for a maybe shot at the Triple Crown. We also had a horse, Mandaloun, that may have finished second in the Derby, or maybe will still win it, not running the Preakness and not taking a crack at the ‘Crown. When the Maryland dust at Pimlico Race Course cleared it was all for naught as an 11-1 outsider, Rombauer, ran down a tired Medina Spirit and coasted home for the Preakness win.

The drug in question that started all this is betamethasone, which isn’t easy to spell never mind pronounce. It’s an anti-inflammatory steroid used to treat pain in horses which, in Kentucky, is not illegal to administer but illegal to race with. Small traces, but double the legal limit of 21 picograms, whatever that means, were found in Medina Spirit’s post-race drug test. Now we have to wait for the second part of the split sample to either confirm the positive or rule it a mistake. For some unexplainable reason it will take the better part of two weeks to get the results. I haven’t found anyone yet who can explain that. My doc gets my blood work back from the lab the next day and I’m not even a Triple Crown contender anymore. 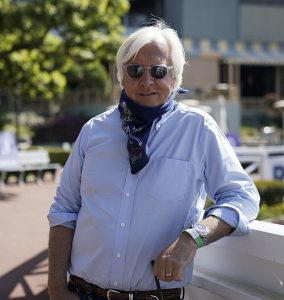 The culprit in this drama seems to be Medina Spirit’s trainer Bob Baffert, a controversial figure on a good day. He’s tops at what he does, has amassed his share of both admirers and detractors and has a big slice of Trump braggadocio in him. His mane of white hair and day or night sunglasses don’t make him invisible anywhere. This guy can’t sneak into a dark room. Seemingly it’s just the way he likes it.

Baffert, the most successful horse trainer in the game today has an ego to match. His initial response to Churchill’s reaction was to play his Trump card, pun intended. He stopped short of calling the positive test a ‘hoax’ or a ‘witch hunt’ but might as well have.

“I got the biggest gut-punch in racing for something I didn’t do,” the 68-year-old said. “And it’s disturbing. It’s an injustice to the horse. I don’t know what’s going on in racing right now, but there’s something not right. I don’t feel embarrassed. I feel like I was wronged.”

After thinking about it for a day or two, and no doubt many conversations with legal counsel, Baffert in an unlike-Trumpian mode, reversed his finger-pointing and shouldered the blame. In a cover-his-ass move, Baffert now thinks the betamethasone in Medina Spirit’s system may have been the result of an antifungal ointment the horse was administered, under his direction, for a skin condition. To his credit, he didn’t mention phony election results in Georgia.

Baffert is arguably the best ever to train racehorses. His mounts have won in excess of 3,000 races and more than $320 million in purse monies. He saddled the last two Triple Crown winners: American Pharoah and Justify, and if Medina Spirit’s win stands, it will be six Kentucky Derby winners for him. His dark side is dark, and his critics love to pounce on it. Baffert’s had over 29 drug violations and a handful of suspensions in half a century in the business. Over the last 18 months he’s had three testing discrepancies in stakes races making Lance Armstrong look like an altar boy. However, the good outweighs the bad with Baffert who was inducted into the U.S. Racing Hall of Fame in 2009. That loud thump you just heard was Pete Rose banging his head on a wall.

The deal the Maryland Racing Commission and Pimlico Race Course made with Baffert allowing him to enter Medina Spirit in the Preakness on Saturday  was laughable. Baffert agreed to allow Maryland officials access to Medina Spirit for extra testing and monitoring to “ensure the integrity of the sport leading up to the race,” according to Pimlico officials. Mighty sporty of Baffert and the track, don’t you think? Tell me why that isn’t done every day for every race? If racing truly wanted to protect the public, it doesn’t need to make this an exception but the absolute rule.

Many problems in horse racing begin and end with oversight or the lack of it. There’s no national commission to oversee the business as there is with every other major sport in the country except for the WWE. However, the WWE has a commissioner and Vince McMahon’s word is final. Racing doesn’t have a Vince. Instead, the states that race try to police themselves through state racing commissions. Reciprocity and consistency from state to state is not mandated, only a courtesy if so chosen. To wit, Kentucky suspended Baffert pending second sample results but Maryland chose to let his horses run.

Most importantly in this whole ordeal is the public’s confidence in racing, if there’s any left. If Medina Spirit is ultimately disqualified but you had a winning wager on him in the Derby, you got paid. You keep your money. Once the “Official” light goes up on the tote board all bets are paid, whether the winner is later to be deemed racing on drugs or not. If you wagered on second place finisher Mandaloun for the Derby, that horse will now be declared the winner if Medina’s second test is positive. However, the change has no value to those who bet on him. It’s what the fellas down by the track’s rail call ‘shit-out-of-luck.’ The one thing that does change is the first-place prize money of $1.6 million, which will go to the last horse standing. If Mandaloun winds up getting the win after all, those that backed him at the wagering window won’t even get a bag of oats to go for their foresight. Even Moe, Larry and Curly couldn’t write this. 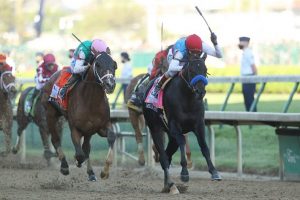 Incredibly, we are still waiting to find out if Medina Spirit (red cap) or Mandaloun (pink) will be the official Kentucky Derby winner.

Only once before in 147 years has a Derby winner been disqualified after the race was declared official. The circumstance was almost identical to this year. Dancer’s Image won the 1968 Derby and four days later was disqualified as testing revealed he ran with traces of phenylbutazone in his system. Appears the testing labs in those days were more technologically advanced and could turn around results more quickly than today. ‘Bute’, as it’s better known, was a similar kind of anti-inflammatory illegal to race with in 1968 but legalized for horses to run with in Kentucky eight years later. That was too late for Dancer’s Image as Forward Pass was given the roses. Dancer’s Image did run in the Preakness two weeks later finishing up the track. Forward Pass won the Preakness but couldn’t wear the ‘Crown, finishing second to Stage Door Johnny in the Belmont.

So this Derby and sideshow is another black eye for a sport that can’t withstand too many more body blows. Its demographic is old. Very old. It’s even older than me old.  There is no youth infusion forthcoming. Over the past few years we have seen major racetracks like Hollywood Park, Hialeah, Calder, Suffolk Downs, Portland Meadows, Atlantic City, Balmoral Park, Rockingham Park, The Woodlands, Sportsman’s Park, Garden State and a whole host of smaller ones close, because of no business and rising costs. They will never return. The land is worth a lot more than the racing franchise.

Joe Asher, former CEO of William Hill USA sports wagering understated to CNBC during the week, “Clearly at some point people are going to say enough is enough.”

I’m a racing guy. I’ve been one for over 50 years, since 1969 when I sneaked into my first racetrack at 17 years-old when you legally had to be 21. Shortly afterwards I spent 35 years of my career in the pari-mutuel industry. I’ve seen just about everything. Nothing about the game surprises me anymore.

But it’s situations like the foolishness of the Derby that can make a longtime fan of racing feel like a horse’s ass.