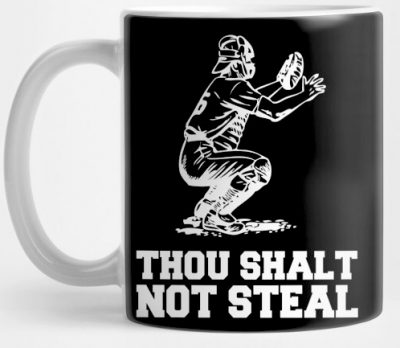 The 2017 Houston Astros didn’t know the Five Man Electrical Band. It’s dollars to trading cards nobody on that Houston team ever heard of the easily forgotten early-70s Canadian rockers. But the Astros and FMEB had one thing in common – signs. One sang about them, the other just stole them.

The FMEB were perplexed by the 1971 sign that read “Long haired freaky people need not apply.” Record buyers across the country tucked their hair under their hats and went in to ask the man why. The song, ‘Signs’, sold a million copies and moved to number three on the U.S. charts. 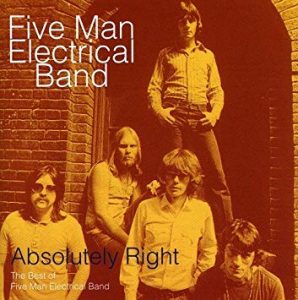 So I took off my hat…Imagine that, me working for you.

Baseball’s off-season used to be such a wonderful time of year. It was dubbed the hot-stove league when living rooms used to be warmed by fire and baseball talk which meant warm weather and spring training was just ahead. Fans dreamed about what moves their teams needed to make to win the upcoming season’s pennant. Yankees fans wondered how many of their regulars would be on the injured list before opening day. Nobody had been eliminated from the race yet except, of course, the Florida Marlins.

It all changed this year, almost a half century after we forgot about the Five Man Electrical Band. The hot stove became the hot seat for the Houston Astros. They were implicated by a former player of cheating, electronically stealing signs from other teams on their way to the World Series championship in 2017 and allegedly into the 2018 season as well. The Astros were nailed. Other teams and their fans didn’t like it one bit.

Hey, what gives you the right?

Stealing signs in a baseball game used to be sport, not espionage. It was gamesmanship. It was trying to one-up the other guys. It was simple, almost primitive. The catcher would signal one finger for a fastball, two for a curve, three for a change-up and the other team would peek in and try to get an edge. It was as much a part of a day at the ballpark as popcorn, the seventh inning stretch and the wave. Sadly, the Houston Astros used technology to up the ante. They used video smartly placed around the ballpark to intercept the opponents’ signs and then relay the information to their hitters. It’s almost laughable, with a scheme that elaborate, that ultimately the signs were conveyed to the hitters by a drumbeat on a garbage can. The drumline must have worked as Houston won the 2017 World Series seemingly at the expense of every other team.

If God were here he’d tell you to your face, man, you’re some kind of sinner.

Signs and stealing them, have been a part of baseball forever. It happens on all levels of the game. Everyone knows it, and in a way, everyone respects it. If you’re caught, you just knock it off for the day. Houston just took it to another, unprecedented level.

Mike LaValliere played in the major leagues for a dozen years. He broke in with Philadelphia in 1984 and by the time he left the game in 1995 he also played for the Cardinals, Pirates and the White Sox. He was a catcher, which meant on every pitch of every game he was involved in giving signs to his pitcher and fielders.

“Part of the gamesmanship of baseball, like bluffing at the poker table, has always been trying to figure out what the other guys were doing,” the 59 year-old nicknamed ‘Spanky’ said. “Everyone tries to get an advantage in some form. To tell you the truth when I first heard about what Houston was accused of I thought it was an overreaction.

“Having a monitor in the dugout is one thing, we didn’t have it back in my day but I understand using it in today’s game for replay and looking at situations” LaValliere continued and added, “but using technology for a code-breaking system is overboard. Houston took this way beyond where they should have. At that point you don’t have to try and figure out a puzzle anymore, it became flat-out theft and because of it you are impacting other guys’ careers negatively. It’s not right.”

Catchers are more in tune with the ebb and flow of the game than any other position on the field. It’s why so many of them make great on-the-field managers and coaches when their playing days are over. LaValliere was always quick to recognize when something was askew.

“I could always tell by the reaction of hitters to a pitch whether they knew something or not,” the Bradenton, FL resident said. “There were things that happened on the field that didn’t make sense and that’s when you start questioning whether the pitchers were tipping pitches or the signs were being stolen.”

LaValliere knew first hand. If he had the opportunity to play a chess match against the opposition he didn’t hesitate.

“Before I got to Chicago, the White Sox used to talk about the scoreboard at the old Comiskey Park and the flashing lights they used on the scoreboard. Certain hitters used to get a light for a fastball or a curve,” the ESPN college baseball and Little League World Series analyst revealed. “When I played, and the few times I ever reached second base, if I thought I could figure out what the pitcher was going to throw I would touch my helmet which told the hitter I think I’ve got it. If he wanted to know he would touch his helmet in return. Then I would indicate what I thought was coming by the way my feet were positioned on my lead off the base. Sometimes I was right, sometimes I wasn’t.”

Do this, don’t do that, can’t you read the sign?

However, when the role was reversed, if LaValliere was convinced his teams’ signals were being pirated he would warn the opposing hitters.

“I would tell a batter if they continued to try and steal our signs someone was going to get hurt and you happened to be the guy at the plate right now, so watch out,” the career .268 hitter and 1987 Gold Glove winner laughed. “I told him to tell his guys to knock off the shit. Most times that was enough to get it to stop. If they were blatant and kept it up, things would get more serious and physical. Sure we hit people, it’s also part of the game.”

Anybody caught tresspassin’ would be shot on sight. 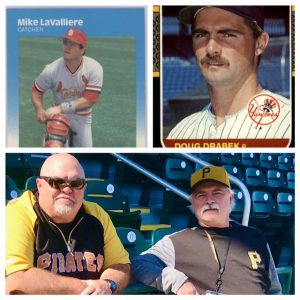 LaValliere and Drabek early in their careers and last month at a Pirates event in Florida.

Doug Drabek played 13 years in the bigs breaking in with the Yankees in 1986 as a hard-throwing right handed pitcher. He also played for the Pirates, Astros, White Sox and Orioles. He and LaValliere were teammates from 1987-92 in Pittsburgh.

Drabek, 57, had his marquee year in 1990 with a record of 22-6, not only leading the National League in wins but also voted the Cy Young Award as its best pitcher. Mike LaValliere was his catcher and very protective of the Pirates’ ace.

“To tell you the truth I never was really aware whether that stuff was going on or not,” Drabek, a soft-spoken Texan said. “Our catchers did, or maybe the guys on the bench were keyed into it, but as far as I was concerned I wanted to make my pitches. If Spanky suspected it he just changed the sign rotation. I just played the game and threw what he called for.”

Drabek, these days a pitching coach in the Arizona organization, has a different spin than most on the Astros scandal.

“There’s no doubt people will look at Houston differently this year, but I’m hoping with them being caught it puts an end to the use of technology,” the 155-game career winner said. “You’ll still have players trying to relay signs and all that stuff; it’s always been part of the game and always will be, but hopefully this allows baseball to clamp down on the use of technology. If that’s the case then let’s take the negative and make it a positive.”

And how much of an advantage does the hitter really have if they know what pitch is coming? Probably a lot. You can argue Houston won a championship because of it but there’s always the other side.

“When David Cone was with the Mets he used to tip his pitches out of the wind-up,” LaValliere recollected. “We knew what was coming and I think as a team we hit .140 off him. There’s a lot more to it than just knowing what the guy is about to throw. You still have to hit the ball somewhere safely.”

“Some guys on our teams used to tell me they didn’t want to know what pitches were coming,” the 1994 NL All-Star said. “A lot of the guys want to remain focused on every pitch to stay within their thought and swing process. Sometimes if you know what’s coming you tend to overswing at it no matter where it’s thrown.”

Blockin’ out the scenery, breakin’ my mind.

Like everything else in baseball if you truly want to make sense of something you turn to the ole’ professor Casey Stengel, who when questioned if he was concerned about the Milwaukee Braves stealing his Yankees’ signs during the 1958 World Series, said, “I have an ironclad system of protecting signs. The other team can’t steal ‘em if my fellows don’t understand them.”