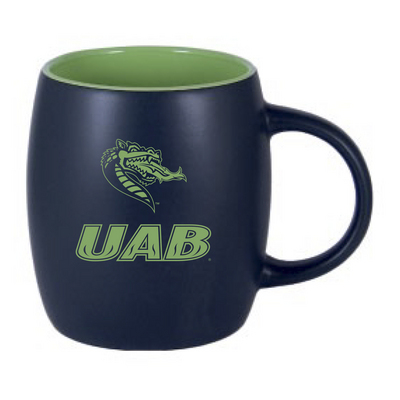 Whether you follow college basketball the rest of the year or not, and most people don’t, this month is all-in for the game.

It’s the fortnight plus one when people who care less about hoops for forty-nine weeks are suddenly caught up in the hype and become aficionados, fill out brackets, join pools and wager with real dough like they know what they’re doing. It’s also a time when you find out there really is something called truTV and hope your cable provider carries it, for where else would you ever hear of Radford, Wagner or Lipscomb? And stubborn as I am, despite one bad game, I’m still sticking with Virginia as my pick to win it all.

It’s celebrated as “March Madness” by the rest of the world; however, for me it’s nothing but March Sadness.

Two weeks ago, I ended an eighteen-year affair. I’m far from over it, and now this annual nationwide love-in with basketball gets me blue and lonely.

The break-up was all my doing.  Selfishly, it just became time for me to move on.

We had spent most of our time together in Birmingham but also hit the road for trysts in Miami, Boca Raton, Milwaukee, Chicago and even shared a getaway to Auburn and up in Columbus, Ohio.

Andi knew about it; in fact, she joined me most of the time.  That made it very special.

Years ago, it just kind of happened: UAB basketball became my sweetheart.

I’d be disingenuous if I told you I wasn’t looking for it. I was. We relocated to Birmingham from Wichita in July, 1999 and I knew I would need something to fill my local sports fix. Back in our Wichita days, we had a very poor Wichita State college basketball product but I attached to it anyway. Fortunately, I was distracted from terrible WSU basketball when I became the PA announcer for the Wichita Thunder in the Central Hockey League, with games that made ‘Slap Shot’ seem like pee-wee hockey. The pay of $25 a night nearly covered a Wendy’s chicken sandwich and a diet pop on the way to the Kansas Coliseum and a stale pretzel and bottle of water in the arena. The real allure on some nights was to hear 10,000 people come alive with Wichita’s only ‘pro’ sport. Indoor soccer doesn’t count. Plus, being an old-time hockey guy made calling games fairly easy for me.

So, when we got to Birmingham, I knew I would have to find a new interest to stray from home twenty nights a year. I was introduced to the late Gene Bartow in the fall of ’99; I was smitten. Bartow was UAB’s athletic director. He had been a giant in the college basketball coaching fraternity, succeeding John Wooden at UCLA after a great run at Memphis State. Despite Bartow’s 52-9 record in two seasons with the Bruins, following a legend never works. Ask Phil Bengston in Green Bay, Dan Devine at Notre Dame or Bill Guthridge at North Carolina. Coach Bartow left UCLA in 1978 to be recruited to little old Alabama-Birmingham to start up its basketball program. Local bumper stickers proclaimed UAB 1, UCLA 0.

The program was twenty years old when we arrived in 1999 and Coach, after 18 seasons and a 366-203 record, became the full-time Athletic Director while his son Murry coached the Blazers. They had already moved from the downtown civic center to an 8,500 seat arena on campus that was dubbed Bartow Arena — the ultimate honor for the program’s pioneer.

Gene and his top gun, Bobby Staub, recruited and massaged me into a booster and Murry embraced me like I was part of the team. In fact, the senior Bartow was such a good salesman that we used him as our Medjet corporate spokesman throughout the state with a high degree of success. Medjet (medjet.com) became recognizable in the community through Gene Bartow, much the way UAB basketball did nationally.

I had found my little sports niche and became a Blazer. Because Miami didn’t play basketball when I was in school, there’s no alma mater hoops allegiance. I follow Kansas and UNLV where Jason, Scott and our money went to school. Pulling for UAB in a state dominated by Alabama and Auburn was pretty simple; being treated as part of the program was pretty special.

After our first season, 1999-00, we moved from a prime center court spot about a half-dozen rows off the court to seats right on the floor. It’s called Gucci Row in LA and Top-Sider Lane in Birmingham. And even though I had the four seats on the end closest to the basket and ample opportunity through the years to move closer to center court, I stayed put for seventeen years. Nobody had better access than me to the important things in life: the rest room, the halftime hospitality quarters and most critically, the exit. I wasn’t moving under any condition. Life as a Blazer booster indeed was very good. 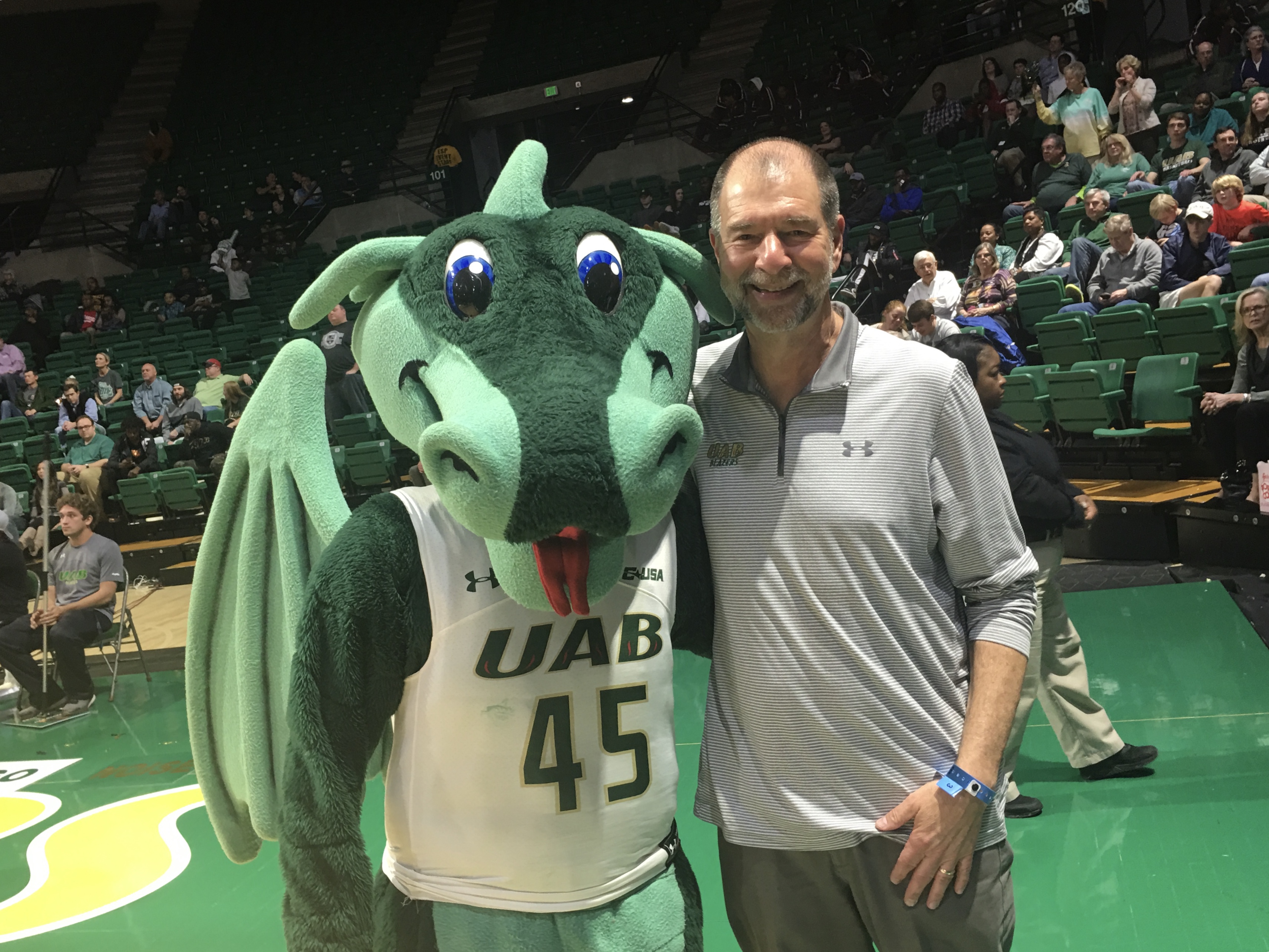 The years passed and so did all the marquis teams in Conference USA — Memphis, Cincinnati, Marquette, DePaul, Houston, Louisville, Tulane, TCU, SMU — all have left for richer conferences. Bartow Arena doesn’t rock the way it once did. In fact, it almost never does anymore. The only one remaining in Conference USA from the good ole days is UAB. A lack of foresight by past university leadership combined circumstantially with extraneous factors has left UAB in the dust playing as a mid-major. And that’s not a good thing.

No longer do we see superstars like Derrick Rose or Dwyane Wade come into Birmingham and take jump shots from the corner with their asses almost in my face. Those who pass through town now are a bunch of good ballplayers who go on to marginal careers in Europe. And though the league is watered down, Marshall’s NCAA win over Wichita State on Friday is now four straight years Conference USA has chalked up an upset in the first round of the tournament with only one bid.

In my UAB era we have been through five head coaches, not really bad for a program that created only a handful of national headlines in twenty years: knocking #1 Kentucky out of the NCAA tournament in 2006; beating #3 Iowa State in the opening round in 2014 and beating North Carolina at home the year before. Since that Carolina win no longer will a name attraction play us; there’s too much downside RPI risk. I get it…but I don’t like it. Instead, we now get non-conference home dates with Alcorn and Mississippi Valley State.

One of my great treasures from this affair is a personal relationship with at least four of the five head coaches. Murry Bartow is still a friend. Mike Anderson, now at Arkansas, succeeded him and was a gentleman. Mike Davis, who had his fifteen seconds of headlines when he replaced Bob Knight at Indiana, was more comfortable being around a basketball than a booster. Jerod Haase, a former Kansas point guard and top assistant to Roy Williams at both Kansas and North Carolina, did great things at UAB which is why he is at Stanford today. Our present coach, Robert Ehsan, 35, is a “kid”, two years younger than my son Jason and a few months older than Scott. 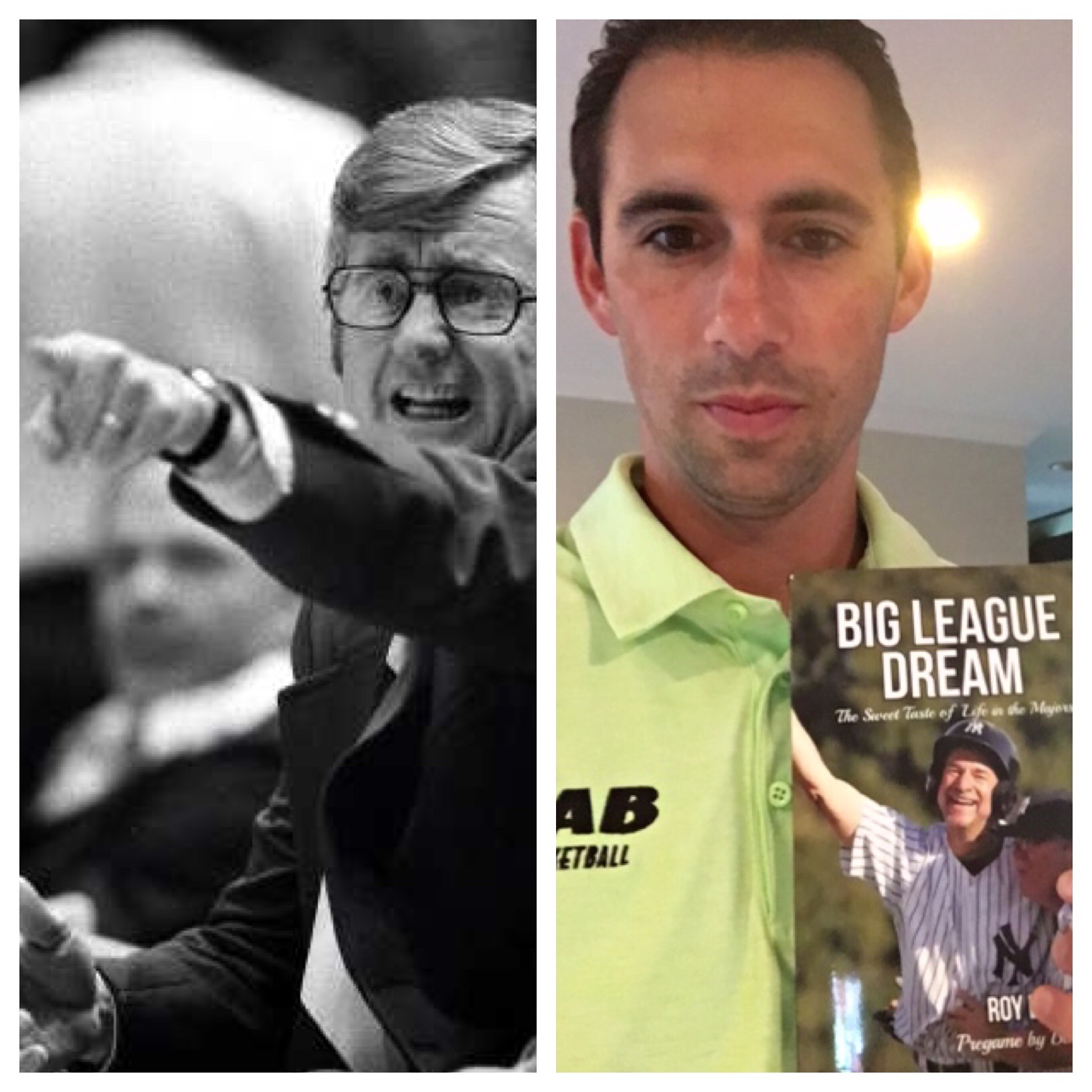 Rob is learning as he goes and has found the head role, complicated by key injuries, a little more challenging than maybe he had imagined but mark the name down — he has the personality, character and age to go on to great things in the game.

For me, how many others are lucky enough to be invited on road trips and be treated beyond what is deserved? How many get calls and texts from a head coach just to check in and see what I thought of the previous day’s game? How many of our coaches regretted hearing my smart ass, candid answers? Or get invited to private practices? Or invited to the coach’s home for dinner? Or get a hospital visit while convalescing from a cinco de bypass? Or send a deep, personal note to Andi on the loss of her mother? How many are sitting home on a Wednesday night and Coach calls to ask, “why don’t you come with us to our road game on Saturday?” Or how many college basketball coaches in the country use a book that you wrote (bigleaguedream.com) as a bedtime story for their kids? I really didn’t need to know they were so bored it put them right to sleep. That was TMI.

This kind of stuff is normally reserved for the high rollers. I’m more of a five dollar blackjack player with a seat at the hundred dollar table and playing with house money.

As we retire and move West to the desert this summer, I will miss the intimacy of the games while sitting courtside and access to the coaches, university officials and the program. For a sports guy and a frustrated sports journalist it was indeed very, very special. I will always be a UAB fan. 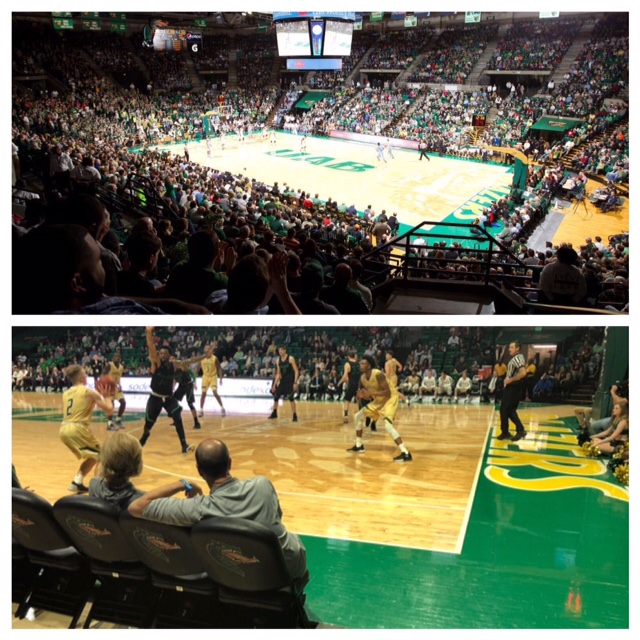 A packed Bartow Arena; Andi and me in what we think are the two best seats in the joint.

One of the beauties of my courtside seats on the end was how quickly I could get out of the arena, into my car parked in front of the building and most times arriving home before the game ended. Not so my last game on March 1. I knew it was the end of the affair. I knew me and this lady dressed in green and gold had reached the limit. Time passes. I have to move on. I can’t take her with me. Maybe I’ll find someone new, but it sure won’t be the same. Not a chance of that. So I stayed to the final buzzer as we crushed eventual conference champion Marshall. I sat for a few more seconds savoring the moment and years of memories. And then Coach Ehsan came over and invited Andi and me into the locker room for my ‘senior night’ farewell to the team. Classy touch. Thank you UAB basketball for embracing me, the way I embraced you.

It was fun. It was special. It’s time to go. It’s March Sadness. I’ll miss you.