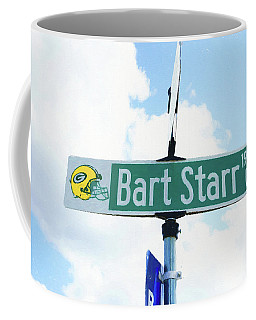 Bart Starr died last Sunday.  Bart Starr was a Hall of Fame quarterback.  As good as he was tossing a football, he was a better person and humanitarian.

The Green Bay Packers of the 1960s were a sports dynasty before we ever kicked the word ‘dynasty’ around. The Boston Celtics of the 60s were also a dynasty. So were the New York Yankees of the 20s, 30s, 40s, 50s, early 60s, late 70s and late 90s. Same on the ice for the Montreal Canadiens and Toronto Maple Leafs of the 40s, 50s and 60s and the New York Islanders and Edmonton Oilers of the 80s.  That was real dominance, not one of today’s made-for-ratings dynasties where if you win twice every four, five or six years you are cast in the same light with those bygone teams that truly dominated.

I was never a Packers fan.  They played in the NFL and I was an AFL kid. The New York Titans/Jets since the league was hatched in 1960 was my league and team.  The NFL was Bluto; the upstart AFL, Popeye. The two didn’t mix.

I knew the Pack was good, everyone did. My brother was a Packers fan so I couldn’t ignore them. I knew the greatness of both Vince Lombardi as their coach and Bart Starr the quarterback but I didn’t really pay it any mind. In the late 60’s, the road to the professional football championship went through Wisconsin.  Ultimately the road ended for everyone but the Packers.

Bart Starr died on May 26 at the age of eighty-five.  It wasn’t until later in his life, some forty-one years after he took his final snap, that I became a Bart Starr fan.

Lightly regarded out of the University of Alabama where he also doubled as a defensive back and punter, Starr was Green Bay’s 17th round pick in the 1956 NFL draft, the 200th player selected.  It probably didn’t help his draft lot the Tide was winless his senior year.  Jeopardy!’s James Holzhauer no doubt knows that Gary Glick of Colorado State was the number one pick by the Steelers in that draft.

Starr split time at quarterback his first five season in Green Bay with throwback names like Tobin Rote, Babe Parillii and Lamar McHan.  The Packers were not very good.  After finishing 1-10-1 in 1958 under rookie head coach Scooter McLean, the Packers thanked McLean, hoped he rented and didn’t buy, and promptly let him go. They took a chance on forty-six-year-old Vince Lombardi, who was the New York Giants offensive coordinator.

Two years later, in 1961, Lombardi handed the QB job full time to Starr and the magic started to happen.  Over the next nine years, behind Bart, the Packers won five NFL championships and the first two Super Bowls.  Starr was the MVP in both Super Bowls along with being the NFL’s MVP in 1966.  He was inducted into the Pro Football Hall of Fame in 1977.

Lombardi left coaching after the January 1968 Super Bowl to become the Packers general manager. In his stead was the easily forgettable Phil Bengtson.  The Packers dipped to 6-7-1 in 1968, which gave them reprieve from having to face the Jets in the 1969 Super Bowl, which featured the only quarterback from Alabama that mattered to me— Joe Namath— who turned seventy-six on Friday. Is that even possible?  The Jets became the first AFL team to eat their spinach and whip the NFL with a 16-7 pasting of Baltimore.  It was the last time the Jets ever saw the Super Bowl without an admission ticket.

Starr retired after the 1971 season as his right arm just wouldn’t give him the same zip that he had known throughout his career. After his playing days ended he became the Packers head coach from 1975-83. He didn’t fare as well with a record of 52-76-3 but his legend in Green Bay only grew through the years.  Bart Starr’s star shined as brightly as ever over Lambeau Field until the day he died.

As great a competitor as Starr was on the field, he was an even better person off it.  It’s no coincidence the NFL’s annual Bart Starr Award is given to the player of outstanding character.

Born in Montgomery Alabama, Mr. Starr ultimately made Birmingham his home. Successful as a businessman, he and Cherry, his doting wife of sixty-five years, were prominent in community benevolence. They founded the Rawhide Boys Ranch, a Wisconsin facility to help at-risk and troubled teenage boys who needed spiritual support.  In Alabama, the Starr’s were heavily involved in schools for underserved students as well as a deep affinity for the Greater Birmingham Humane Society, of which I later served as a director.  They suffered the unimaginable loss of their twenty-four year old son in 1988 to drug addiction.  The Starr’s resolve was to do even more for their community and the less fortunate.

In 2012 when our medical assistance membership company, Medjet (medjet.com) was contemplating an advisory board, Mr. Starr was the first one we contacted.  His same-day response was that he would be “honored” to serve.  He was later joined by noted sports orthopedic surgeon Dr. James Andrews and professional golfer and then Medjet corporate spokesman Jim Furyk.  All highly decorated in their fields, but as a group you couldn’t find three nicer or more respected gentlemen.  It was warming to see the reverence that Furyk, a lifelong Steelers fan, had for Starr. 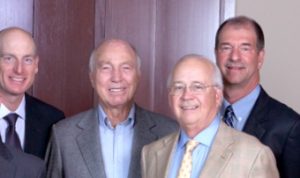 Out of my league with Medjet Advisory Board members (l-r): Jim Fuyrk, Bart Starr and Dr. James Andrews.

The time I spent with Mr. Starr was special. Whether it was sitting at the same table at a fundraiser, or in our conference room talking sales strategy, or in his office just gabbing, it was easy to see what made this man so special.  Despite some cognitive slippage, he could recall almost verbatim the 1959 speech Lombardi made to the Packers his first day on the job.  Coming off a one victory season the year before, Lombardi’s message was either buy-in to what they were going to do or hit the road.  Nobody left the room. Two years later they all had championship rings.

Perhaps the greatest Bart Starr memory was his game winning quarterback sneak in the legendary Dallas-Green Bay ‘Ice Bowl’ game played on New Year’s Eve in 1967. The wind chill at kickoff in Green Bay hit forty-eight below and the heating system on the field failed.  Thus was born “the frozen tundra” in a voice only the great John Facenda could memorialize.  The halftime show was canceled as the band’s woodwind instruments froze and the mouthpieces of the brass instruments got stuck to players’ lips. The referees whistles froze during the opening kickoff and were out of commission the rest of the day.  Everything was done by voice command. The Packers got the ball with five minutes left in the game down 17-14.  It was late afternoon and the sun was setting.  By then the actual temp was twenty below and the wind chill was seventy below.  Below zero, that is.  It was colder than a Trump fundraiser in Pelosi’s living room. Facing a third and goal from the Dallas two yard line with sixteen seconds remaining and Green Bay using their last timeout, Starr went to Lombardi and told him the running backs couldn’t get their footing but he felt he could sneak it across.  The always-in-charge Lombardi seceded to his quarterback, told him to run what he wanted, and “Let’s get the hell out of here.”

Lombardi admitted after the game that he had no idea what play Bart was going to run.  What he did know was the Packers left the NFL Championship Game with a 21-17 victory and moved into their second straight Super Bowl.  Everyone in Wisconsin was too cold and too happy to be bothered that the Pack didn’t cover the six and a half point spread. 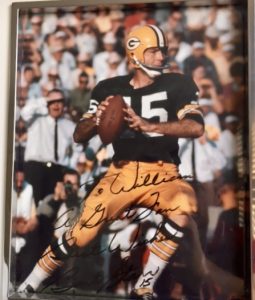 Starr wouldn’t sign a generic autograph, it had to be dedicated like this one, to a colleague in London who he called “a great fan”.

As Mr. Starr was telling me the ‘Ice Bowl’ story, vividly and with great satisfaction,  I remember asking myself ‘Is this really happening?’  Was I really sitting with Bart Starr, just the two of us, and listening to this legend?  A year or so later, in 2014, Mr. Starr suffered a series of strokes that led to a period of failing health over the past five years.

Starr was a stickler for autograph demands.  He wouldn’t sign a generic one.   All requests had to be dedicated to someone to keep them out of the hands of the unsavory resale memorabilia market, which he despised. If Mr. Starr was going to sign, it had to include the recipients name like he did when I asked him to dedicate a number 15 Packers jersey to a longtime friend in Atlanta and a signed picture for his number one fan and a business colleague in London. He offered me his fifty yard line Lambeau Field seats for the Jets-Packers game.  He was far too respectful to make it contingent upon me pulling for the Pack.  Instead I told him I would wear green.  He smiled.

To the day he died, Bart Starr was an ambassador and statesman for the game of football. But he was a finer man than he was a football hero.  The world was a better place with him sharing a piece of it with us. Some voids can’t be filled. Today the huddle is empty without our quarterback.