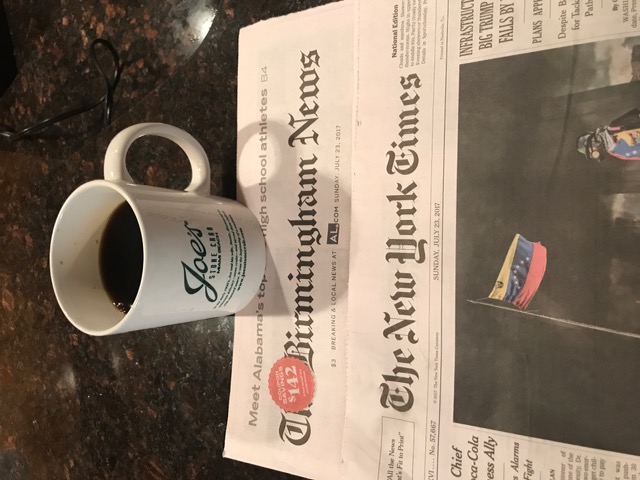 Sunday morning coffee thinking about things with my Joe’s Stone Crab mug.  Even though Joe’s is closed for the season, a guy can still fantasize about a table for four with Donald Jr., Robert Bentley and Babe Parilli, enjoying mayo-laden cole slaw, an order of Selects, hash browns and key lime pie. Russian dressing on the side, please.

Is there anything that’s not all-class about Roger Federer?

Do you think Mike Pence wakes up every morning and asks himself, “is today the day?”

How much longer can USA Today stay in print? Make the over/under two years. I got the under.

Floyd Mayweather is the anti-Federer.

If the Wall Street Journal’s Jason Gay writes it, I’m reading it.

Why is the baseball All-Star game the only one I can watch?

I understand why Junior took the meeting with the Russians. I really do. It’s business and in business you look for every edge you can get. They were so far behind in the polls at the time, they never thought they had anything to lose. And this too will pass, the way everything seems to in the sport of politics.

Great line from Jay Leno: “House of Cards started as a television show and has turned into a documentary.”

Forbes lists the Knicks as the most valuable franchise in the NBA. Can you imagine what they’d be worth if they were good?

“Well, folks” are two words you never want to hear from the captain on your flight. Whatever comes next is never good news.

If it came down to one restaurant to have my last meal, I’m torn between Joe’s Stone Crab or the Las Vegas Palm. 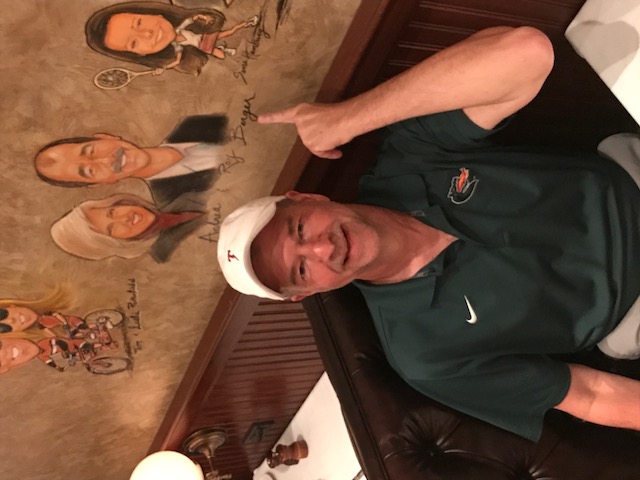 Nothing tops the scenery from table #91 at the Las Vegas Palm!

But Joe’s Stone Crab doesn’t have Andi Berger and my caricature on the wall, so book me a table at the Vegas Palm, please.

I will never be able to accept the Houston Astros in the American League.

Why did I wait so long to start watching “Orange Is the New Black”?

All streaks, good or bad, come to an end. Just ask Joe DiMaggio and Susan Lucci. My nine in a row 5-star reviews of ‘Big League Dream’ on Amazon ended last week with a 4-star by the “Vine Voice”. They took exception that the book included two chapters on some who never played in the major leagues. I maintain they all had Big League Dream(s), as the cover suggests. After moping for three days, I’m okay. At least Barry Sparks, who wrote the review, said “Berger writes well and it’s entertaining reading.” If you haven’t bought this 4.9-star piece of trash yet, go to bigleaguedream.com or Amazon and do it. And if you get a minute, visit the Big League Dream Facebook page and “Like” it. After this my ego needs it.

Sean was the first to go, no surprise. How much longer does Reince have?

Fortunately, my 4-star Amazon streak only lasted two days. Thank you Alan Blumkin and Abi Babcock for the 5-star reviews on Thursday and Friday. I’m not sure I had any mojo to begin with, but it’s back!

Not that the competion has ever been that steep, but former Alabama Governor Robert Bentley, disgraced and deposed from office a couple of months ago, told a local television station last week that “I’m the best governor Alabama’s ever had by far.” That noise you just heard was George Wallace rolling over.

Explain to me how a Jewish kid, born in the Bronx and grew up on Long Island, listens to nothing on Sirius/XM these days but Willie’s Roadhouse. Siriusly.

And speaking of Bentley: while he was still in office, he appointed Alabama AG Luther Strange to replace Senator Jeff Sessions when Sessions left the Senate to recuse himself as Trump’s Attorney General. Bentley told Strange he would not call for a special election to fill the seat, instead waiting for the regular 2018 cycle. Bentley then resigned under pressure of a sexual and personnel scandal and former Lt. Governor, now boss lady Kay Ivey, had other ideas and has called for a special election this fall. So it’s back to fundraising for Strange, the tallest Senator ever at six-nine. A few weeks ago, some of the more affluent in the Birmingham Jewish community held a successful fundraiser in support of his candidacy. Two weeks ago, Strange debuted his latest television spot: Luther Strange = Christian Values. Ah, politics.

I still don’t see any action in the 2020 Democratic bullpen. 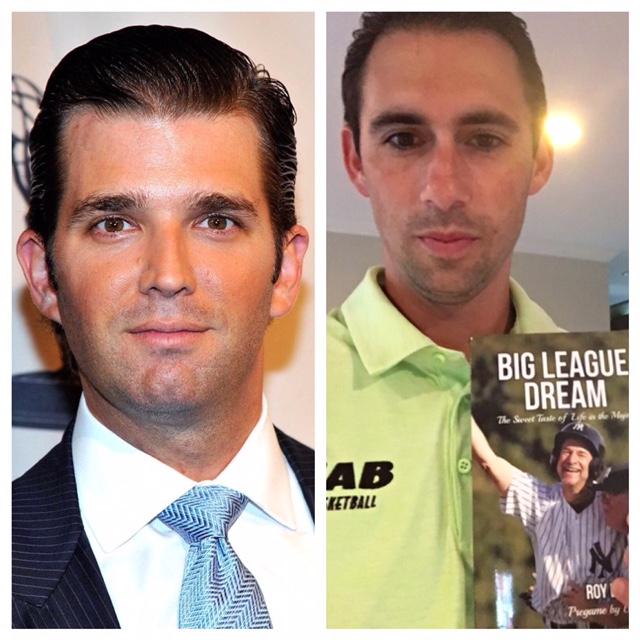 Separated at birth: Donald Jr. and University of Alabama-Birmingham head basketball coach Rob Ehsan.  Junior admitted he met with a Russian operative. Coach Ehsan has not, yet, but he’s on the next flight to Moscow for a 6’10” kid who can rebound and likes grits.

Does anyone under the age of 30 know who Bob Hope was?

And finally – with NFL training camps getting ready to open, the woeful Jets slim playoff hopes took a blow last week when Babe Parilli, back-up to Joe Namath on the 1969 Super Bowl team, passed away at 87. Babe was listed on the Jets depth chart for this season.

Have a great week.~