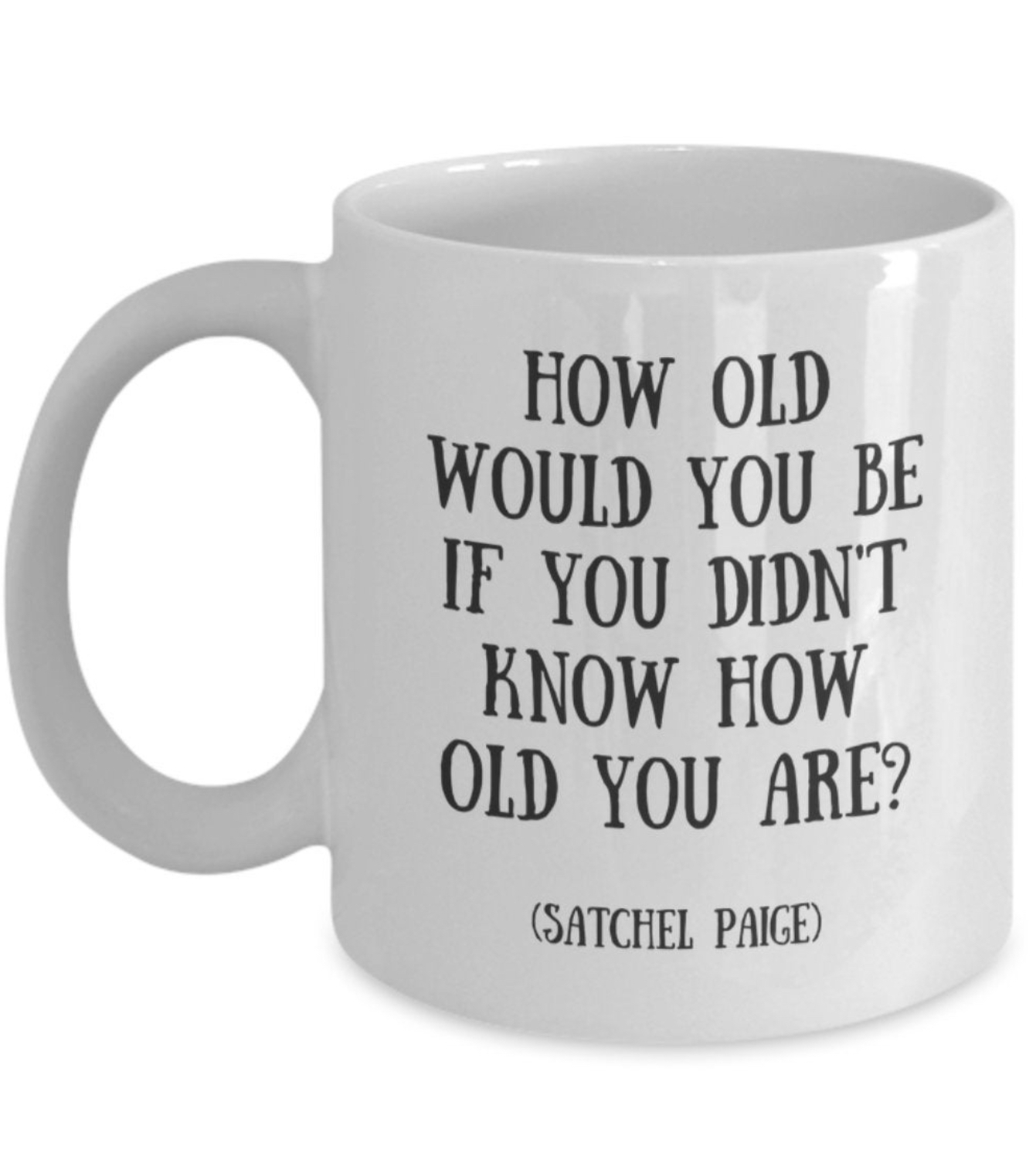 Joe Nuxhall was too young to appreciate it.  Satchel Paige wasn’t. Nor were the sixty of us gathered last weekend in Pittsburgh.

The first time Nuxhall stepped into a major league dugout was on June 10, 1944. He was fifteen years old. That’s right, 15. Cincinnati had a shortage of players, with hundreds of MLB players enlisted for service in World War II, so they plucked Nuxhall out of a local high school to fill a vacant bullpen slot. It must have been a doozy of an absence note his mom wrote to the teacher. No doubt however, Nuxhall was far too young to appreciate what was happening to him.

Paige, on the other hand, wasn’t. After toiling in the Negro Leagues for almost 18 years, Satch finally broke through to the major leagues in 1948 at the age of 42. Like Nuxhall being the youngest, Paige was the oldest player to ever make his big league debut. That same year, 1948, Paige not only became the first Negro League pitcher to play in the World Series, but he was also the first to win a World Series with his Cleveland Indians. It was also the last time Cleveland won.  Paige savored every moment reaching the pinnacle; in fact, not only was he the oldest to ever make his major league debut, but 17 years later he also became the oldest to ever pitch in a big league game. Charley Finley, owner of the then Kansas City Athletics, signed Paige to a one-day contract in 1965 at the age of 59. It was another of Finley’s unique promotions. Paige obliged by pitching three scoreless innings. 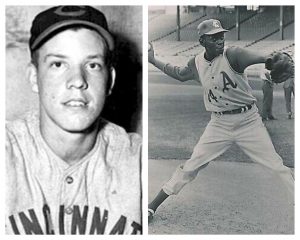 Nuxhall (l) was the youngest to ever pitch in the major leagues. Paige (r) the oldest.

Last weekend sixty of us, some younger than Paige was in 1965 but most older, got together in Pittsburgh to celebrate the game that we revered as kids. And even though today’s baseball has a tendency to challenge our loyalty, it’s ingrained in all of us. Decades ago we had the same dream as Nuxhall, Paige, and the thousands and thousands of others who sat on a wooden major league bench, smoothed the infield dirt with their spikes, spit on the field for no reason, and got to romp on grass as pristine as an Augusta, Georgia, fairway in April. None of us had the talents of Nuxhall and Paige to do it for a living, but that doesn’t mean we ever lost the dream and the desire.

So there we were on Sunday in Pittsburgh’s PNC Park, home of the Pirates and arguably the prettiest setting in baseball. The Roberto Clemente Bridge spans over the left field scoreboard and Pittsburgh’s sprawling and modern downtown looms over the right field horizon just on the other side of the Ohio River. Or maybe it’s the Monongahela. Nah, it must be the Allegheny. Probably the confluence of the three.

We got to the ‘Burgh last weekend through different careers, different lives, different experiences and different hopes, but we had one thing in common: baseball. We dreamt of playing baseball for a living. However, when we realized we had no chance, we found other things to do. Then, later in life, we paid to play baseball at a fantasy camp and make believe. It’s not cheap but every dream machine has its price.

The Pirates weekend came together because we needed our fix after January’s Pirates fantasy camp in Florida was COVID-scrapped. Our invitation came because at one time or another we have participated in a Pittsburgh Pirates fantasy camp. First sixty to respond get to play. A couple of former Pittsburghers- Kevin Kubala and Bill Sirakos- organize a one-day charity event each year called Field of Dreams. It’s a baseball pick-up day, a fundraiser for the Pirates Alumni Charities. This year the one-day event became two. The Pirates and their progressive fantasy camp coordinator, Joe Billetdeaux, wanted to make it a weekend to remember. 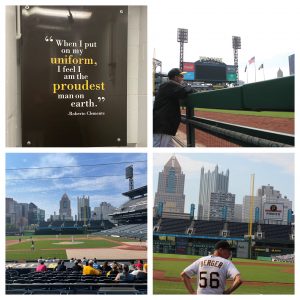 A Sunday at PNC Park. The Clemente quote hangs in the runway from the clubhouse to the Pirates dugout. It’s a gorgeous setting whether you are in the dugout, on the field or watching from the stands.

Four teams, 15 to a side. A reasonable $150 each. Most of the guys were from the Pitt area but a nice turnout from around the country too: Ohio, Eastern Pennsylvania, California, Texas, Florida, Nevada and New Jersey. One diehard from Toronto even jumped the border. Cost him $500 in COVID testing to get back home. Oh Canada. He would have paid double for the opportunity to play ball. Two coaches per team that drafted its players from the 60-player mass roster. Four games on Friday, two for each team, at a suburban high school rec center were followed by a playoff round the next day at the big-house: PNC Park in downtown Pittsburgh.

The caliber of baseball is pretty bad. A couple of guys in their 40’s still have it; those in their 50’s remember when they could play but body parts no longer cooperate; the majority of guys in their 60’s and 70’s have no recollection nor muscle memory of whether they were once athletic or not. We think we were but can’t remember.  It’s adult little league. On any given play the ball can be thrown around more than Clayton Kershaw on a pitch count. I’ve seen a ball topped two feet in front of home plate become a triple. Guys bend down to stop a ground ball and can’t get back up. Some of the pitchers can throw the ball 50 mph, maybe 60 mph tops, but they are few. Most of the pitches eventually find home plate, speed not withstanding. Nobody cares. Everyone just wants to be out there pretending to be able to do what we still love. Nobody can run anymore but everyone runs around with smiles wider than Shohei Ohtani.

Decades ago every American kid wanted to be Joe Nuxhall or Satchel Paige. Nuxhall, on that fateful 15-year-old day in 1944, lasted 1/3 of an inning giving up two hits, a wild pitch, five walks and five runs. He was then shipped back to algebra class. Nuxie once said, “I was pitching against seventh, eighth and ninth-graders, kids 13 and 14 years old, and all of a sudden I look up and there’s Stan Musial. It was a scary situation.” It took Nuxhall eight years to return to the major leagues, eventually winning 135 games in a 14-year career. Paige won 90 games in the Negro Leagues and another 28 in his five years in the bigs. He started late and at 59-years-old finished late. Both Nuxhall and Paige got to a place we dreamed of but never attained.

Which is even more reason for us, decades later, to savor the opportunity to pace in a dugout or dig-in to a big league batter’s box. For me, I had every intention of playing last weekend but the timing didn’t work. A lacerated lower eyelid in November and three resulting surgeries put me on the DL. I felt great, I just couldn’t see. So, along with my Pirates pal Paul Metlin, who’s also on the DL and more banged up than Conor McGregor, we coached one of the teams. I still got to put on a uniform and step onto the field at age 69. That’s good stuff. 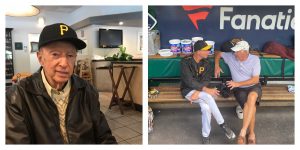 Dad (l) taught me to be a boyhood Pirates fan. Chatting in the dugout pre-game with former Pirates great Steve Blass (r).

Last Sunday at PNC Park was also very personal for me. I was a Pirates fan as a kid because my dad was. I thought that was the way it had to be. Ironically, my father never stepped foot into Pittsburgh in his lifetime, but his Pirates passion became mine. I took it a lot more seriously than he did. I agonized over every Pirates’ loss in the 1960s and there were a lot of them. I would sneak a transistor radio under my pillow at bedtime and through the miracle of nighttime radio waves could get a clear signal from KDKA radio to listen to the games. While my parents showered me with birthday gifts, all I ever wanted on May 6 was a Pirates’ win.

The sprinkles on top of my sundae last weekend was when former Pirates pitching ace Steve Blass, whom I idolized as a kid, stopped by the dugout as I was practicing my spitting. Blass, almost 80, was the hero of the 1971 Pirates-Orioles World Series winning two games including a complete game four-hitter in deciding Game 7. Back then I was a very impressionable 19-year-old. I first met Steve at Pirates camp in 2010, when all we talked about was baseball. Eleven years later, our conversation last Sunday reflected our age: his health, my health, our families’ health. Lots to talk about.

Once the championship game started I trotted out every inning to coach third base. PNC Park isn’t Forbes Field, where the Pirates played during me and my dad’s Pirates heyday in the 1960s, but time marches on. It’s now their home. Nonetheless, I’d take a moment, cherish where I was, look at the Pittsburgh skyline, and think of Dad. I smiled every time I left the dugout for the coaching box.

Anyone who says at almost seventy years old you can’t be a kid again, has never stepped onto a major league baseball field. As Mr. Paige once wisely said, “Age is a case of mind over matter. If you don’t mind, it don’t matter.”

All of us playing baseball last weekend minded. That’s why it mattered so much.