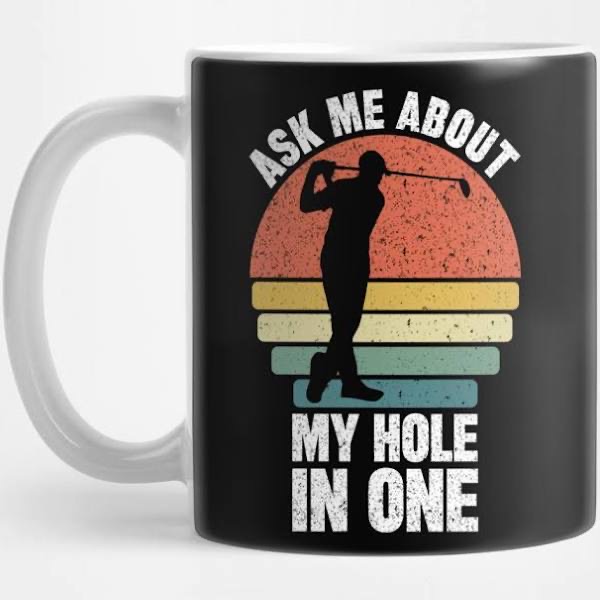 The serious golfer will tell you there are two ultimates in the sport.

The not-so-serious types would admit the same.

There’s the ultimate score and the ultimate shot. Everyone who plays the game has an ultimate score. The lowest round they ever played. Nobody has ever played a lower round than Jim Furyk did at a PGA event in Connecticut in 2016. He shot a 58. None of us have ever come close, or will, but we all have a personal number that we constantly try to beat. Shoot your age and call it a day.

However, it’s the ultimate shot that we’ll always remember. A hole-in-one (HIO) doesn’t define us. But a HIO is one heck of a good talking point while waiting on a par-three tee box for the group ahead to putt out. “How many do you have?”

No doubt casual golfers know their best round, but most times can’t readily recall anything about the specifics. A hole-in-one is different. Almost all those credentialed can tell you all about the course, the hole, the distance, the club they used and how the ball landed in the cup. Much more than you want to know.

“How many do you have?” is a question I wished I was asked a week ago Tuesday while waiting on the third tee box at Red Rock Country Club. My answer would have changed on the next shot.

Two years ago there were none. Then lightning struck in the desert on June 4, 2020, and I joined the HIO club. I became a multiple member on June 28.

If you don’t mind a little braggadocio my second one was perfect. A gap wedge that went right into the clown’s mouth, jumped up through his nose, down his left arm and into the hole. Just the way I played it. Absolute joy.

Okay, no clown but a gap wedge and a little bit of joy. The third hole on the Mountain course, my home Summerlin, Nevada tract, was playing short. It was 106 yards. The pin was twenty feet behind a bunker located just in front of the center of the green. As a left handed golfer, it’s a hole that I habitually pull to the right.

I was the last of our foursome to hit. None of the other three were in jeopardy of marring their scorecards with a birdie. I am a finicky player. It drives me batty to have others standing laterally in my line of sight or within earshot on the tee. So they moved behind me, to the right, but continued a conversation that seemed quite important. These guys are politically polarized so with no blows landed I knew it wasn’t politics they were talking. Their names aren’t important, so we’ll leave those out.

My club struck the ball cleanly. Inflight Jim Nettles looked up and said, “That looks like a pretty nice shot.” He resumed his conversation with Tom Teates and Ed Wollock, who will remain nameless.  I watched the ball fly just over the trap, land easily and roll and roll and then a few more rolls. Right into the cup. I turned to the group, they were too involved to even look up, and  said, “Boys, I just got a hole-in-one.” I got a “Way to go” from one of them and a fist-bump or two. Then they continued chatting.

We drive up to the green. I knew enough to bring my phone. I reached in the hole, pulled the eagle ball out and asked for a picture. At that point they finally acknowledged, matter of factly, what I did. Then they went looking for their shitty shots.

A bit put out, I texted Andi and sons Jason and Scott with the picture. No caption, just the picture. Andi was playing tennis, not too far from the third hole. A wind blowing in our direction and I would have heard her scream. Jason texted back and said, “I’m surprised it took you that long, you play enough.” The news traveled internationally. Scott was getting ready to board a plane in Riyadh on his way to Dubai. He asked me, “Was it as exciting as the first one?”

The chances of us hackers making a hole-in-one is 12,500-1 meaning the Pittsburgh Pirates have  a better chance of playing deep into October. For a professional golfer it drops to 2,500-1. Improbable enough. Most amateur golfers have never had the thrill and odds are never will. Two of the professional teaching staff at our club never have had one and shook their heads at my news. So, to counter Jason’s statement, a hole-in-one once is a fluke. It takes a little bit of skill and a whole lot of good fortune. Get more than one and defy all the probability. In fact, I’m reminded of an ex-teaching pro, Harry Gonder, who was a colleague back in the 70s. Harry was challenged by one of his club members. The member bet him, with great odds, he couldn’t score an ace in one thousand shots. Gonder took the bet. Finally Harry had to stop. His hands were so bloodied from the grip on the golf club he eventually threw in the red towel.

My answer to Scott was that it wasn’t even close to the thrill of the first one. In 2020 I played in a foursome where we had a little money on every hole, so sidebar conversations took a back seat to watching everyone play and perhaps making a buck. That June 4 day the par-three 15th hole at Red Rock was playing 122 yards, the shot was perfect, rolling maybe forty feet, taking a right turn and into the cup. There was enough excitement and hollering on the tee box to be heard in Riyadh. It was at the height of Covid, so as we all were about to hug an electric shock seemingly stopped us; we halted midstep and high fived instead. Either way, it was an incredible thrill. Plus, I promised myself if I ever did it I would shave my mustache that had been a part of me since 1970. However, I never thought that far ahead to a second one and whether or not I would grow it back. It took sixty-eight years to score the first HIO, who’s thinking about a second? The mustache decision is still pending.

Fishing the ace out of the cup while my three playing partners feign interest.

I’ve come to find out my group’s conversation last Tuesday was about salmon. It seems one of the boys swears the salmon at The Cheesecake Factory is the  best he’s ever had and was trying to illustrate the point while I was readying to hit.  Thousands of quality restaurants in Las Vegas and this yokel eats salmon at The Cheesecake Factory.  I was really sorry to distract them by the ball going into the hole that nobody else saw but me.

True, the 106 yards was the shortest playing hole on the golf course that day but nonetheless it’s a one on the scorecard. Ironically, the left field wall at Yankee Stadium is 318 feet from home plate. Measured another way it’s 106 yards. A ball that flies over it into the grandstand is also a one on the scoreboard. A run is a run. A hole-in-one at any distance is an ace. Count it.

When we finished our round three hours later, two of the guys scattered. I asked one to go back into the pro shop with me to testify to what I did. He may not have seen the ball go into the hole but saw me pull it out, which was good enough to attest. Prize money was on the line, so I needed the witness.

Of course, hole-in-one lore means you have to buy drinks for the bar. We have a program that allows us to ‘insure’ the unlikely event should it ever happen. Everybody in the HIO program pays $5 every time someone scores one. It’s meant to cover the bar bill and whatever is left goes to the hero du jour. It doesn’t happen very often at our club, despite what Jason thinks.  Maybe once a month, maybe twice or most of the time not at all.

I got lucky. I got back into the clubhouse at about 1:20 pm. It was a Tuesday, so the lounge had 15, maybe 18 people in it. I didn’t know anyone. The easiest thing would have been to shrug my shoulders and walk away. But I didn’t. I was feeling pretty good, so I went to each table, and those sitting at the bar, and told them I just got a hole-in-one and wanted to buy a cocktail. Some hadn’t had a drink since the Carter administration but decided as long it was on me this was time to start again. The first HIO was on a Friday and the place was jumping. The tab was close to $300. This time I knew it would be much lighter.

I waited a day or two and went back to the pro shop to see the economics of my shot. I got $750 in shop credit, good for anything like shirts, shorts, hats, clubs, whatever they sell. My bar bill was $101 and Gerry Montiel our head pro said my balance was $582. I went to the University of Miami, not Yale, but even I knew that math didn’t work. I told Gerry my balance should be $649. “No, it’s not,” he smiled. “Andi was in this morning and already spent $79 of it.” Oh.

So, what’s my biggest take away from the second greatest golf shot I ever hit? Is it the memory of HIO#2 that will be with me forever? Of the golf shop credit that might last another month? Maybe it’s the commemorative plaque that will hang in the Red Rock Country Club clubhouse noting the achievement?

Nah, it’s none of those. Instead, it’s despite all the posh and pricey seafood restaurants on the Strip, the best value in Vegas is the $23 piece of salmon at your neighborhood Cheesecake Factory. My three playing partners would tell you that aces a HIO any day.

(If you have a few sips of coffee still in the mug and a few extra minutes and are really bored, here’s the link to HIO #1- https://royberger.com/sunday-morning-coffee-june-14-2020-time-for-a-shave/)