Congratulations Las Vegas, you are growing up as a sports city.

You’ve always been a special event, entertainment and sports gambling town, but now you’ve crossed the white lines into a real sports city. Good for you.

Your professional hockey team is in its third season and a phenomenal success. The Raiders are coming this summer and you built them a brand new domed stadium for 65,000 maniacs. Pretty soon, under that dome, you’ll be hosting Final Fours, college football playoffs, the Super Bowl and perhaps the real litmus test of a major league city: Wrestlemania. You’ll be another Phoenix or Atlanta except with something to do after nine o’clock. In fact, on Thursday NFL Commissioner Roger Goodell called you “a world class city.” That’s a very good start.

But the news that broke before breakfast last Wednesday morning — that your hockey coach was fired — shook you like the remnants of a California quake. Or like Wayne Newton driving a moving truck out of town. Or even worse, like legislation introduced in Carson City for prohibition on Las Vegas Boulevard.

Welcome to big time sports, LV. Everything isn’t always like you want it to be.

The National Hockey League took a chance and awarded you a franchise, nee the Vegas Golden Knights. Nobody knew if this would work but you showed ‘em. You fill all 17,367 seats in TMobile Arena for every home game and another 1,000 standing around the building. Overwhelming. You, Las Vegas, fell head-over-black-chips in love with this team.

And the team did more than its share. It opened its very first season in 2017 just a few days after the mass shooting at the music festival across from Mandalay Bay. The Vegas Golden Knights were knights in shining armor, getting out in the community and helping wherever they could. Nobody really knew them then, or cared a rat about hockey, but the team’s profile and their concern was so very high you became smitten.

And they did what no professional expansion franchise ever did before— they made it all the way to the championship round, the Stanley Cup Finals, in an inaugural Cinderella season before ultimately losing to the Washington Capitals. No matter, the love affair between player, fan, team and community was in full bloom.

They were coached by a Canadian tough guy. Gerard Gallant was a hockey anomaly — part goon, part goal scorer. He compiled over 1,600 penalty minutes in 11 seasons, mainly with Detroit. When he wasn’t in the rink clink he could bang the puck home scoring 211 career goals. It was an odd combination of a brawler that also was a goal scorer.

As a head coach in the NHL, with previous stops in Columbus and Florida, Gallant compiled a .500 record in just over four seasons. Not too bad…but not good enough. He was fired from both jobs. At least Columbus fired him in his office. The Panthers, a classy bunch, did it in a Raleigh, NC parking lot.

The Vegas brass wanted discipline and experience to meld their makeshift first year roster and Gallant was their guy. The players called themselves the Misfits because they were 20 guys, taken in the expansion draft, that their former teams didn’t want. Expansion teams are never any good. That was no surprise to Gallant when he agreed to take the job.

Led by goaltender/Pittsburgh reject Marc-Andre Fleury, who quickly became more popular in this desert community than a comp buffet at Bellagio, the Golden Knights became the sports story of the 2017-18 season not just here, but nationally. They ultimately lost the Cup to a better Washington team in five games but they won the hearts of every Las Vegan. You, Vegas, were spoiled rotten by early success. Gallant was selected as NHL Coach of the Year. He had to be.

Last year, the Knights’ second season wasn’t as great. They had a tough act to follow. However, demand for tickets was incredible. Resale prices were high and working class families were thrilled to be able to afford to go to even one game in the season. Local TV ratings were higher than the top of the Stratosphere…oops, I mean the rebranded Strat. The Knights were knocked out of the playoffs in the first round in seven games after squandering a three goal lead in Game 7 against their fiercest rival, the San Jose Sharks. It was a very contentious series. Gallant had nothing nice to say about the Sharks or their head coach, Peter DeBoer, whom he called a “clown.” All said, making the playoffs in your first two years is a heck of an accomplishment.

This season, halfway through, has been up and down. With a talented roster the Knights moved into first place in their division in early January. That earned Gallant NHL All-Star Game coaching honors. Then things melted. They started skating in slush and lost four games in a row and went from first place to fifth, which put them below the playoff line. They lost three straight at home against teams they should beat. Last Tuesday night the Knights went to Buffalo and lost. Losing in Buffalo normally gets you your final paycheck.

Gallant was fired early the next morning. Nobody saw this coming. In reality he was lynched by his own success. The real crisis was, for whatever reason, the players stopped responding. You can’t fire 20 guys, so chop off the head and see if the body responds. 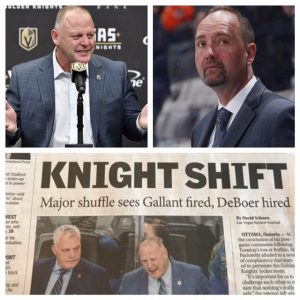 Gallant (l) and DeBoer. The coaching change was enough to knock Iran, China and even the impeachment out of the Review-Journal lead story.

Las Vegas morning shows, sports talk shows, Facebook, Twitter, the Review-Journal newspaper, local news, and the internet went crazy. Fans felt betrayed by upper management. How can you do this to one of our own? To a family member that took us to the promised land even if we didn’t get all the way in? Season tickets, impossible to get, went on the market for resale. In a town that really doesn’t get its due as a caring community, people were somber and angry. One of their own was wounded and they didn’t like it. Never mind the average coach in the NHL has a tenure of 2.4 years. Gallant made it 2.6. Never mind two of the past four Stanley Cup winners made coaching changes midway through the season. The town said if we are going to win, we want to win with our guy.

The Raiders will be here in seven months but it won’t be the same. Yes, people are really excited, but the Knights are “Vegas Born”, as the tee-shirts and bumper stickers say. For the Raiders, this may just be another stop like they’ve done three times before. Oakland-LA-then back to Oakland. Nomads always looking for a hot meal. Will this finally be the spot? The one thing nobody doubts is the Knights are here to stay. They were born and will grow up here. Maybe one day even become champions here.

Shock and understanding about Gallant’s firing didn’t get any easier when the Knights simultaneously announced Gallant’s replacement. Peter DeBoer, fired by arch-enemy San Jose in December, is the new guy. Yep, the “clown” according to Gallant, is Las Vegas’ newest resident.

This town always did love a good circus.