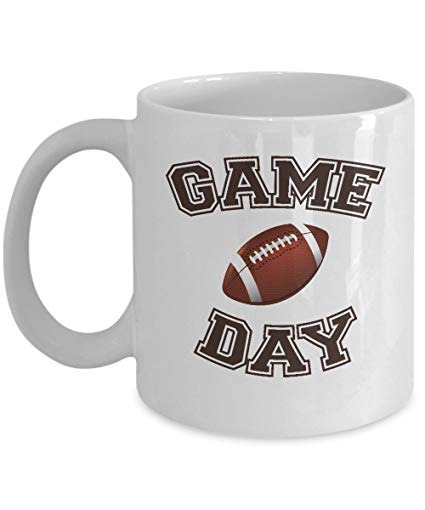 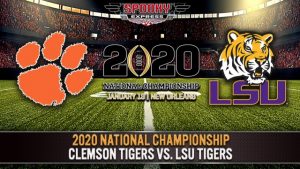 Clemson, LSU and 75,000 partisans will be in New Orleans Monday night for the 2020 College Football Playoff National Championship game.  For the first time in four years, I won’t be.

It’s because Nick Saban, Mat Whatley and me have an arrangement. Saban gets Alabama to the title game and Whatley gets me there. This year Saban didn’t uphold his end so me and Mat had to stay home this weekend.

In fact, I’m not going again unless Nick and Mat go with me. It’s all or nothing for the three of us.

You are probably familiar with Saban. St. Nick is the highest salaried public employee, not just in the state of Alabama, but the entire country. He gets a sheckle over $11 million a year to be the head coach and CEO of the Alabama football program. Word is he does a pretty good job, too. That doesn’t include whatever Coca-Cola pays him to put that bottle of Coke and Dasani on the podium when he holds those one-sided pressers that make Sarah Sanders look bipartisan. In my book, he’s worth every nickel of the eleven big ones for what he has brought to Alabama, both the state and university.

Mat Whatley doesn’t make as much as Saban. At least I don’t think so. Maybe he does. I haven’t asked him. What I do know is he and I are both members of the board of directors for Medjet (medjet.com) in Birmingham, AL where I spent the last 20 years of my career. Board fees don’t pay that much. Of this, I am sure.

Whatley is a 1981 Alabama graduate. He gets his ‘Bama honest. Saban is a ‘72 graduate of Kent State and I was two years later from Miami. Neither Kent nor Miami play much competitive football anymore so our allegiance has literally gone south.

Once upon a time a long, long time ago, national championship games and The U were tighter than Chuck and Nancy. From 1983-2001 Miami played in eight natty’s winning five. I was at four of them. However, hard football times have fallen on the Canes culminating this season with losses to powerhouses FIU and Louisiana Tech. Being shutout by LaTech 14-0 last month in the prestigious Walk-On’s Independence Bowl was when the program, as we once knew it, officially expired. Yep, bageled in lovely Shreveport. Sorry, I digress.

The annual get together for Nick, Mat and me started in 2017 in Tampa. Alabama played Clemson for all the college marbles and Whatley invited me to go with him. It wasn’t just any ‘ole journey from Birmingham, where we both lived, down to Tampa. Whatley didn’t want to get bogged down with the commercial aircraft hubbub of pushing and shoving so he chartered his own airplane for our group of five. It was then on to a VIP pre-game reception at the stadium. Life for this ex-Yankee as a carpetbagging ‘Bama fan was good. The only condition was we had to leave when Mat said it was time, which was music to my early exiting ears. ‘Bama took an early 14-0 lead before Clemson roared back behind a quarterback named Deshaun Watson. Wonder whatever happened to him? After three quarters the Tide was ahead 24-14 and I had a feeling we wouldn’t be there much longer; Mat didn’t want to get caught on a runway line behind the other 300 private planes that would be leaving after the game. That’s not one of those third world problems. Despite Clemson scoring early in the fourth quarter to chop the lead to 24-21, Whatley gave us the hook with ten minutes on the clock. With five to go Clemson took their first lead of the game 28-24. With two minutes remaining ‘Bama scored to take back the lead 31-28. I know this because I heard it on the radio in the van taking us to the private terminal. When we got into the terminal there was one second left in the game. Clemson just scored to go back on top at 35-31. It didn’t sound like we really missed all that much. The good news was we were number three for departure. At least that made Mat happy.

In 2018 we were in Atlanta fittingly for an all-SEC game between Alabama and Georgia. This time we made the two hour drive over to the Georgia Dome with three other guys. Mat even scouted a church parking lot that would give us a quick exit. For the second straight year my son Scott, a UNLV graduate who at least has Alabama high school bloodlines, flew in from Los Angeles to join us. It was a miserable night outside, as cold as a Belichick-stare, with freezing rain falling. Fortunately, the game was inside. Getting into the Dome was chaotic. One of the four entrances was closed because President Trump decided since he had a free night, why not come over, create some bedlam and then leave in the third quarter? Our VIP hospitality gave us early entrance into the stadium but those we passed who were shivering in the rain waiting for the gates to open were none too impressed by our credentials. This figured to be a short night as Georgia dominated the first half taking a 13-0 lead. I was waiting for the look from Mat that it was time. I knew what he was thinking but he never made eye contact. Instead, Alabama opened the second half by benching quarterback Jalen Hurts and putting in a back-up named Tua Tagovailoa, which sounds more like the ice cream of the day in a Maui confectionery than the name of the quarterback that was expected to get his team out of a two touchdown hole. 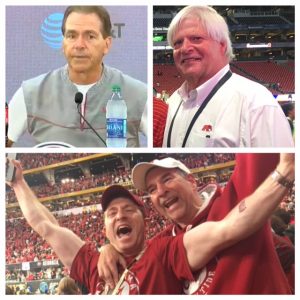 Nick, Mat, Scott and me during better ‘Bama times.

For some reason we stayed. Even for the overtime.  That allowed Birmigham public relations guru David Davis to take a classic picture of Scott and me when Alabama somehow won it on a Tua pass. We were there for another forty-five minutes watching the trophy celebration and letting the confetti fall. Cash the over on Mat Whatley.

Last year, a couple of months after moving to Las Vegas, the title game was in San Jose, California. It was another all-Southern affair between Alabama and Clemson. Scott came up from LA and joined me as we met Mat and his family at the game. Levi’s Stadium, home of the 49ers, was the host venue. It may be the most remote and toughest stadium to find and access in the country. Alabama was a big favorite. The game figured to be a rout and it was. Just the wrong way. Clemson had every answer for anything Alabama did. It was 31-16 at halftime and I knew we wouldn’t be there much longer. Clemson opened the lead to 44-16 after three quarters when Mat told us he was leaving with wife, daughter and son-in-law in tow. If there was any doubt that we would stay a little longer it was erased when we saw Saban leave, too.

So Monday night will be a little less frantic. I throw on a pair of ‘Bama sweat pants and a hoodie as I assume Saban will do as well. I’ll root for the Tigers and know I have a winner. Just not sure which ones. I am sure that Whatley has already planned and timed his route from the living room to the bedroom at the final gun. If he stays that late.

Twelve months from now the championship game will be in South Florida. Three months from today at Passover tables around the world, Jews will end their Seder dinner with the expression “Next year in Jerusalem.”

At the Seder table for Saban, Whatley and me, we will end the meal by chanting in unison, “Next year in Miami.”

The three of us fully expect to be there. Roll Tide.