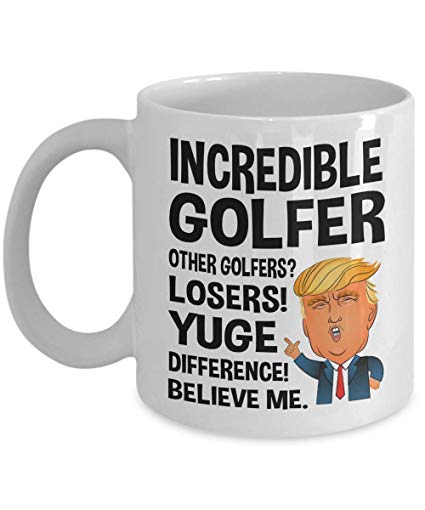 It’s not his fault.

He lies, he cheats, he bullies, he stretches the truth.

But it’s not his fault.

But it’s not his fault.

He browbeats, he exaggerates, he torments, he sues, he insults and he’s a braggart, but it’s not his fault. He can’t help himself.

Why does he do it? “Because he has to,” says Harvard psychiatrist Dr. Lance Dodes about Donald Trump. “He needs to be the best at everything,”

“When it comes to golf, very few people can beat me,” Mr. Trump once bragged.

“He can’t stand not winning, not being the best,” Dr. Dodes continued. “It had to have started very early in his development. He exaggerates his golf scores and his handicap for the same reason he exaggerates everything. He has to. He exhibits all the traits of a narcissistic personality disorder. People with his disorder have no conscious about it. He has no sense of morality about things. He lacks empathy towards others. He’s a very ill man. He doesn’t get that other people have rights and feelings. Other people just don’t matter to him.”

See, it’s not his fault. He can’t help himself.

I’ve known compulsive liars and compulsive exaggerators. And I’m absolutely convinced they don’t think it’s lying if they believe it themselves and virtually all of them do. It’s a way of life. It’s Donald Trump’s way of life.

This conclusion from a Miami journalism grad which is a long par five away from a Harvard psychiatrist. I can write about you and no doubt Dr. Dodes can analyze you. But in this case I’m confident that Trump and the legions like him actually believe their schmaltz.

Author Rick Reilly introduced me to Dr. Dodes and his theory. Reilly also introduced me to Trump’s golf game in his latest New York Times bestseller ‘Commander in Cheat, How Golf Explains Trump.’

I’ve never met Reilly but I’ve known him since 1997 when he wrote the “Life of Reilly” on the inside back page of Sports Illustrated, week after week, for a decade. When it arrived in my mailbox every Thursday, I’d treat SI like a Shabbat prayer book and read it from the back forward as Reilly was my immediate must-read. I’ve missed him since he left. Nobody has been able to duplicate his prose. He was my magazine humorist in those days; complimenting my newspaper humor fix, Dave Barry, syndicated from the Miami Herald. These days it’s Jason Gay of the Wall Street Journal.

President Trump is one of my favorite topics to write about, to talk about, to mock and to watch. I agree with some of the things he’s done; disagree with a bunch of others. When he’s on television I find him mesmerizing. For me he’s Rickles on The Tonight Show; Ali on a rant; Sinatra with a mic; Clemente at-bat; Gretzky with the puck and Mary Tyler Moore doing anything. I can’t get enough of the guy; it’s like watching O.J. on the 405 — you just don’t know what direction it’s going to go or how it’s going to end.

It’s a breezy 244 pages filled with chuckles, laughs-out-loud, head shakes and mouth agape more often than not. Reilly did his homework by interviewing over a hundred golf pros, caddies, amateurs and course developers. There are dozens more from the sports, entertainment, business and political world that have played golf with Mr. Trump and can testify to his course ‘etiquette’ from their own eyes.

The book not only details Trump as a golfer, businessman, landlord, course owner (he owns fourteen and manages five others, all of which he claims are “the best in the world”); con man, money maker, politician, country club maven and a guy that needs to win at all costs. It also gives you many suggestions on how to play the honorable game that perhaps you never thought of. Hard and fast tips on why, as Mr. Trump says, “very few people can beat me.”

How to win a club championship by not playing the course the day of the tournament. You can also be club champion before the golf course is officially opened. Trump claims to have won eighteen club titles.

Whether or not you have honors on the tee box, which goes to the player that shot the lowest score on the previous hole, always hit first. Don’t wait for the other players to hit. Just get in your Ricky Bobby souped-up, extremely fast golf cart and head right to your ball. Some great things can happen when you get to your ball first and nobody is watching.

How you can hit your second shot on a par four into the water twice and still score par. (“Throw me another ball, they weren’t looking” Trump told his partner.) This story was corroborated to me over dinner by someone that was in the group that played with him that day.

When a bird flies over just as you are about to hit and you don’t like your shot, that’s good enough for a mulligan.

There is no need to ever sink a six or eight foot putt. Just pick it up. But make sure your opponents have to putt from the same distance and closer.

Don’t believe the club rule that you can’t drive your cart on the green. You own the place, do what you want.

Always play through any group in front of you. Never ask permission. You own the place, do what you want.

Carry a can of red spray paint in your cart. If your ball hits a tree that you don’t think should be there, paint a red ‘X’ on the tree. It will be removed by the grounds crew the next day.

Take it as a compliment the caddies at the prestigious Winged Foot Golf Club call you ‘Pele’ behind your back. Back in his day Pele was the finest soccer player in the world. Your ball kicking skills must be comparable to his.

Even though you are a good golfer, always make it seem better than you are. Manufacture scores that keep your handicap at 2.8, incredible for a seventy-three year old man. That means on average you shoot about three shots over par for a round. Jack Nicklaus, the hack, is only a 3.4. Most who have played with Trump say he’s probably a 10-14 handicap, still terrific for his age, but clearly not terrific enough for him.

Play a round with ESPN’s Mike Tirico and former NFL quarterbacks Jon Gruden and Ron Jaworski. Pick Gruden as your partner because you “like winners.” Make sure the other two hear you say that. Tirico, no slouch as a 12 handicap, has 230 yards to the hole on his second shot on a par five and hits perhaps the best three-wood of his life seemingly right on the pin. Trump is already up to the green. When Tirico gets there, his ball is not on the green but in the bunker. “Lousy break,” the president tells him. Who do you believe: the President of the United States or his caddy, who later tells you that your ball was ten feet short of the pin but Trump tossed it in the bunker. In golf speak they call it a ‘lousy break.’

And here’s one I’d like to learn. If you are ever on the downhill side of a green where nobody can see you, make a chipping motion and don’t worry about actually striking the ball. Walk up the hill, head straight for the cup and pull a ball out. Then look up and yell, “I chipped it in.” Nobody will catch on. 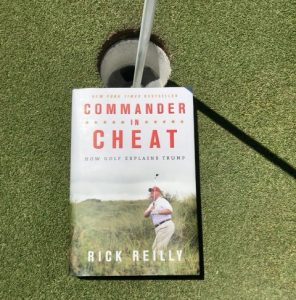 Rick Reilly did his homework. Years ago he even played a round of golf with his subject. The book was full of Reilly-ism’s that I’ve missed over the years since he’s been gone from Sports Illustrated. He said “If Trump is a 2.8 handicap, Queen Elizabeth is a pole vaulter.” Or saying “Donald Trump cheats is like saying Michael Phelps swims.”

The one that scared me was “Golf is like bicycle shorts— it reveals a lot about a man.” I just bought a bicycle and riding shorts a month ago. I donated the shorts to Goodwill yesterday.

Reilly, sixty-one, reminds us through Trump’s first twenty-two months in the White House the President has golfed 149 times, or once every four days. President Obama played 250 rounds in eight years. Trump criticized Obama twenty-seven times on Twitter for playing too much golf during his presidency. During a 2016 campaign stop Trump told a New Hampshire crowd “I love golf but if I were in the White House I’d just want to stay and work my ass off, make great deals.”

Since he’s been president, Trump has not played a single round with a Democrat or a woman. Never mind his 2012 comment that “Obama should play golf with Republicans and opponents rather than his small group of friends. That way maybe the terrible gridlock would end.” This presents a perfect opportunity for Trump to accomplish both with one invite. Ask the ‘squad’ of Alexandria Ocasio-Cortez, Rashida Tlaib, Ayanna Presley and Ilan Omar to throw their sticks in the car and head up I-95 from DC to his club in Bedminster, New Jersey to play a round. However, that would mean they would have to drive through the disgusting, rat and rodent infested mess that is Baltimore which would probably be an invite killer.

In our local paper just last Sunday, the president blamed the inadequate air conditioning system at the White House on Obama, saying “the Obama administration worked out a brand new air conditioning system for the West Wing. Now that they did this system it’s either freezing or hot.” So while he would really like to be working in the Oval all summer, he has no choice but to spend time golfing at his resort in New Jersey until the maintenance crew can untangle another of Obama’s messes.

It’s not his fault. He can’t help himself.

Reilly has no love for the President. His bias comes through easier than a two footer for bogey. It’s hard to find a good word about Trump anywhere between the covers unless Trump said it himself. If you can put that aside, the author has great material to work with. The book is chock full of stories, some so wild you can’t believe it unless you remember who he is writing about.

Whether you are pro, con or somewhere in the Trump middle like me, it’s a good read. It’s eye-opening and funny. It’s also well researched and of course well written, almost on par with The Most Wonderful Week of the Year and Big League Dream.

And remember, if Mr. Trump believes it, it must be true.