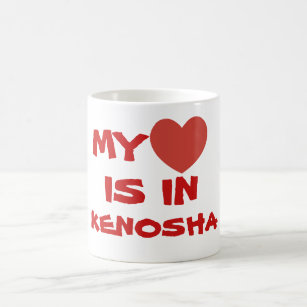 For twenty years I commuted in and out of Kenosha, Wisconsin.

I enjoyed the ‘out’ much more than I enjoyed the ‘in.’ Kenosha wasn’t one of my favorite business stops but it was an important part of my career, so I did what needed to be done. I haven’t thought much about Kenosha since I made my last visit there eleven years ago. Until this week.

Kenosha is a gritty town. Sitting just east of I-94, forty miles south of Milwaukee and sixty north of Chicago, it’s the first place you come to when crossing the Illinois-Wisconsin line from the south. Kenosha is a community of 100,000 or 20,000 more than a full house at Lambeau Field, 150 miles due north in Green Bay. It’s 80% white; by and large an Italian and Eastern European burg.

For nearly a century the bread and butter of Kenosha was the production of automobiles; the first one rolled off the assembly line in 1902, the last one at the Chrysler plant in 1988. For the next two decades the industry and workforce were downsized and only produced automobile engines before ceasing operations for good in 2010. Kenosha was a union stronghold, blue collar as it came, and most of the workers’ earnings tended to recirculate in town. Kenoshans are a loyal bunch.

The city tried to reinvent itself in the 2000’s with a modicum of success as a livable and cost-efficient bedroom community for Chicago and Milwaukee. It’s not necessarily an attractive place save for a portion of its downtown harbor that sits on Lake Michigan. For years tourists would flock to Kenosha for discount shopping at its outlet stores, and while that industry still survives, it’s not nearly the novelty it once was. Travelers now jump off the interstate at one of the four Kenosha exits for gas or a burger and then keep going somewhere else.

The famous Brat Stop is right off I-94 and Highway 50. Get there early or get on line. Head west past the Brat Stop and you are forty minutes from Lake Geneva. Now that’s pretty country. If you fancy cheese, Kenosha is the place for you. Take your time wandering through Mars Cheese Castle at I-94 and Highway 142. Kenosha has just as many taverns per capita as any spot in the country, just don’t try to find a seat on Sundays when the Packers play. Tenuta’s Deli & Liquors is an institution in town. For seventy years and still going strong. It’s an Italian shopping feast just a couple of miles east of the interstate and Highway 158. If you can’t find it at Tenuta’s, it isn’t worth having.

Kenoshans and Wisconsinites love their football, brats and beer. Unfortunately, they didn’t feel the same about greyhound racing which is what got me there.

I was the first general manager of Dairyland Greyhound Park before it opened in 1990 but shortly thereafter was kicked up to the American Racing Group corporate office to oversee operations at Dairyland and a couple of other properties for its Alabama ownership. We built a beautiful forty-million-dollar facility, less than a mile off the highway, that seemed almost cursed from the get-go. First an egotistical and arrogant regulator, with a chip against our ownership group, flexed his muscles with unreasonable demands causing significant delays in the project opening. We had to cancel two grand opening dates before we finally got the green light to race. Public confidence in Dairyland waned from the start. Ultimately, that regulator cost the state of Wisconsin millions of dollars in tax proceeds that were never realized. Not sure he really cared because he crossed the state line every night and went home to Illinois. Once Dairyland finally got up and running and had some success, Native American casino gaming was introduced in Milwaukee. Gaming dollars once intended for the racetrack found the slot machines instead. When we tried to get equal footing with Indian casinos, we were denied by the state. After nineteen years, in 2009, we finally shut the doors for good. It just wasn’t meant to be.

I commuted to Kenosha for the better part of those nineteen years. First from Wichita, Kansas, and then from Birmingham, Alabama. Twice monthly visits were part of my regular routine and Kenosha was a schlep. O’Hare is forty-five minutes away and Chicago Midway just over an hour. That’s without traffic and road construction, which perhaps you’ll find at half-three in the morning. Perhaps. Milwaukee was only a half-hour out but flight options were limited. Nothing says home like an upgraded deluxe king at the posh Kenosha Best Western Executive Inn, a corner room overlooking Wendy’s and the Shell station. The joint really started jumping when they added the waffle iron to the breakfast buffet sampler complimenting the corn flakes, bananas and mini containers of yogurt.

The shooting of Jacob Blake last Sunday is something for which you can’t prepare. Or can you? Can you offset and nullify stupidity? On both sides. Are peace officers comprehensively evaluated and trained for anger management? Anger management, or the lack of it, was more than likely at the root of the George Floyd killing and the Blake shooting. Certainly, each of the victims had culpability and needed to answer to law enforcement officials, but their plights were something for the judicial system to resolve, not a gun and a knee.

Could this have been prevented by annual psychological testing and anger management training?  Who would object?  I’d hope police departments around the country, and police officers, would welcome that process. It may not ultimately be the only answer but it’s surely a start. Sadly, neither Minneapolis nor Kenosha were that fortunate.

In Kenosha, you might have been in business last Monday morning and by nightfall your business was looted, ramshackled and burnt to the ground. Law enforcement couldn’t control the mobs in the streets. Some trying to do good, some intent on creating havoc.

Kenosha was in over its head. I know some of the public officials still running the city and they were all out of their league but objectively, who can rehearse for something like this?

Bill Apgar, who managed Dairyland Greyhound Park from 1993 through its closing in 2009 and still calls Kenosha home, said last week was difficult for him and his family.

“It was upsetting and distressful,” Apgar told me. “We were heartbroken.”

Kenoshans and Wisconsinites are a proud, proud lot. They love their community and they love their state. They welcome outsiders but expect them to show respect when on Badger soil.

“The toughest thing about last week,” Apgar continued “was seeing all the outsiders coming into town causing the trouble.”

Like our overzealous racetrack regulator who left Wisconsin every night for his Illinois bedroom, the vigilante that gunned down two innocent bystanders in the middle of the street two nights later with an AK-47 rifle also came from Illinois.

Who needed them? Not Kenosha.

Apgar lamented, “I’m hopeful one day we can go back to the nice little community that Kenosha once was.”

It’s time for me to put past professional disappointment aside. My heart goes out to Kenosha and Wisconsin.  You are stronger than this. Kenosha will always be scarred but something tells me, not too many years down the road, the brats will regain their sizzle and the beer will once again go down cold. Society will demand change. The clock is ticking. We can’t take much more of this. Kenosha just might become the standard bearer that drives that change.

I hope it starts an American trend.