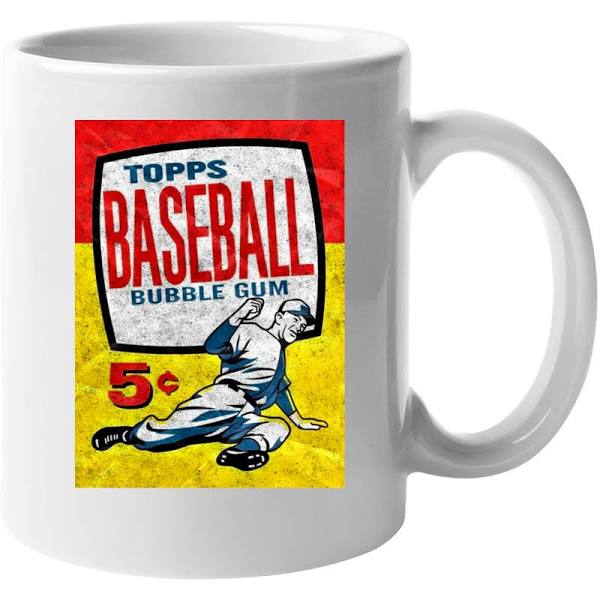 “All they wanted to do was take my picture and they were going to give me a new television set,” Jake Gibbs remembered with a hearty laugh. “Every day I waited for that set to arrive and was just hoping they didn’t cancel it realizing what a lousy deal they made!”

Gibbs played for the New York Yankees from 1962-71, used primarily as a reliable back-up catcher. He had his choice of sports when he came out of college in the late 1950s as an All-American quarterback and All-American infielder at Ole Miss. A guaranteed early first round draft pick for both the NFL and AFL, Gibbs chose his first love, baseball.

“As soon as I got to my first Yankees spring training camp in Fort Lauderdale, a guy from Topps came over and told me he would give me a free television if I allowed them to take a picture for my baseball card,” Jake recalled. “I’m from a small town in Mississippi that didn’t have baseball cards, so it sounded like a heck of a deal to me.”

And that’s pretty much the way it went for everybody in the game. Bucky Dent got a check for $500 and a set of golf clubs. Doug Drabek thinks his check was for $50. Jon Warden got $5 and a special gift. Mike LaValliere says he got $15 or maybe a couple of pennies more. Only Jim Leyritz, in the early 90s, cashed in getting $5,000 when he signed away his rights.

Driven in large part by the free time serious card collectors had during COVID and the accessibility of trading sites on the internet, the baseball card business, once booming as recently as the early 2000s, is making a comeback. The strip mall card store is reappearing. There are professional companies that now grade cards for trading and eBay is going bonkers with buyers and sellers.

“During the pandemic people were home, there were no sports being played and their nostalgia was rekindled,” Jeremy Brown of the Ultimate Sports Cards of Las Vegas recently told the Las Vegas Review-Journal accounting for the resurgence of trading cards. 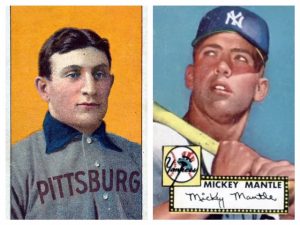 A 1909 Wagner and ‘52 Mantle. The two most treasured and expensive baseball cards in history.

To wit, a Mike Trout card just changed hands for $3.9 million and a 1952 Topps Mickey Mantle was sold a couple of months ago for $5.2 million. However, both take a back seat to the Mona Lisa of baseball cards: a T206 Honus Wagner that sold last weekend at a card show in Chicago for $6.6 million. That’s probably enough to make an offer to buy the Miami Marlins. Wagner broke into baseball in 1897 at age 23 with the Pittsburg Pirates, 14 years before the letter ‘h’ was added to the end of Pittsburgh. He was a shortstop who played for 21 seasons and won the National League batting title eight times, the last in 1911. His trading card debuted in 1909 as a promotion in cigarette packages by the American Tobacco Company. Only a few dozen Wagner cards still exist today because, as the story goes, Wagner made the American Tobacco Company cease production because they did it without his permission and he didn’t want kids buying cigarettes. The limited number of Wagner cards in circulation and the very, very few in mint condition presumably makes one worth six million dollars to the unidentifiable but financially very comfortable buyer.

Sure, as a kid in the 60s, I had my share of baseball cards. Bowman and Topps started the modern era of cards: Bowman in 1948 and Topps in 1951, before Topps bought their competitor four years later. In my day, a nickel at Jack’s Luncheonette or Marcal’s 5 & 10 got you a pack of six cards and a stick of very hard gum that, no doubt, was endorsed by the American Dental Association as a business development tool. Today you can get a pack of eight, sans gum, for $5. The gum bit the dust when collectors complained it stained the cards; never mind what it did to kids’ incisors. I used the cards like all my friends did: pull out our favorites, which for me was any Pittsburgh (with an ‘h’) Pirate, and use the rest, including Mantle and Gibbs, for flipping, trading or to be really cool in our bicycle spokes.

I have no idea whatever happened to my collection. With as much hazarai that I kept, there are no boxes of my baseball cards. I can blame my mom for a lot of things: my two brothers; freezing my pet parakeet Sammy to death by turning on the wall air conditioning unit right next to Sammy’s cage; and I can surely blame my mom for being way too nice and loving with me despite my adolescence nonsense, but not for my missing baseball card collection. I obviously didn’t care enough about it to preserve it as I did with the real important stuff like my Little League game-by-game results from 1962 or my 1965 Camp Impala newsletter.

The relationship Topps had with the ballplayers in those days was a win-win for everyone: the players, the card company, and us kids.

Bottom line was the players really had no choice. The arrangement between Topps and the other card manufacturers was with Major League Baseball which called the shots.

“They gave us what they wanted to give us,” remembers Drabek, who was a rookie with the Yankees in ‘86 and won the National League Cy Young Award as a Pirate in 1990. “I really don’t remember how much I got, maybe $50, but I know it was small enough that I didn’t cash it and kept it for posterity. I guarantee you if it was $1,000 I would have run to the bank. And of course I have no idea what I ever did with that check!”

Warden pitched one season in the bigs as a member of the 1968 World Champion Detroit Tigers before arm trouble ended his career. He was the only player of the 50 active on the rosters of the ‘68 Tigers and Cardinals to not get into a game in the World Series. “They did let me warm up once, so I was feeling pretty good about myself,” he joked. Topps gave Warden a trading card bonus of $5 and a case of chewing gum when they signed him in 1966. “Let me tell you, they got screwed in that deal,” the southpaw chuckled.

When LaValliere hit the Phillies spring training camp in the early 80s, the card companies were very much in control. “I don’t remember if they gave me $15 or $25, but I would have been hard pressed to buy a couple of beers,” he quipped. 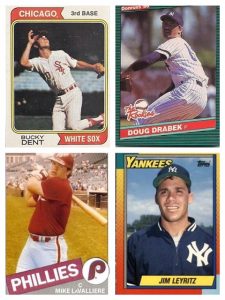 Things changed a few years after that. With the advent of collective bargaining and a strong players union, an agreement was reached for universal rights payments to the players for baseball cards, sunflower seeds, team apparel and the like. Payment distribution was going to be equitable; the stars made as much as the scrubs. Today, for the time being, Topps is the only MLB sanctioned baseball card partner and has been for 70 years. However, news broke this week they will be replaced following the 2025 season by Fanatics.

“Today it has gone way down because salaries have gone way up,” LaValliere added. “In my day we were compensated highly through licensing to alleviate the salaries the teams had to pay us. At one time it was a substantial part of our income; today these guys make so much money that licensing is really just a small token to them.”

As a rookie with the Yankees in 1990 Leyritz benefitted from MLB’s agreement with the players’ union and ultimately the distribution parity. “From 1992 on everyone got the same amount so one player couldn’t monopolize the funds,” the Yankees 1996 World Series hero said.

Though the numbers are hard to validate, I’m told that today each MLB player gets a relative nominal amount in rights fees that helps offset their proportionately reasonable union dues.

Gibbs played with Mickey and Roger and Yogi and Whitey and all the 1960s Yankees greats. Did they all get the same television set deal from Topps?

“Back then things were so different,” Jake said. “It was never brought up among any of the guys. We played ball and we didn’t worry about what the other guys were making. In a lot of ways, I think the teamwork and chemistry was better back then because of that. We got what we got and just wanted to play ball.”

Gibbs, 82, is unarguably the nicest man you’ll ever meet. He really wanted to talk about that television set.

“It was a beauty,” he laughed over the phone from his Oxford, Mississippi, home. “I can’t tell you how many inches it was and I’m pretty sure it was a black and white, but it was mine and I loved it.