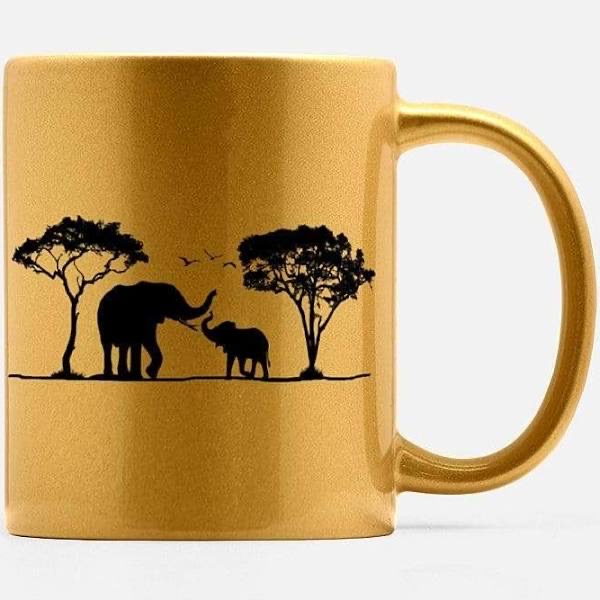 The clamor of a pride of lions racing by your upscale tent awakens camp at the break of dawn. At breakfast, look away for a second and a team of baboons leap off the rafters to steal and run with the bananas next to your eggs. They also take the toast, lightly buttered, too. Later that same day papa elephant, thinking you are impeding the river crossing of his family, charges at your canoe. Thank goodness for the expertise and fast thinking of our guide.

I’m a New Yorker. Bred in Manhattan, born in the Bronx and raised on Long Island. In the middle of the Africa. What do I know about any of this? Enough to know I’m ready to go back for more.

Six years ago, for our 25th August 17 wedding anniversary, Andi and I decided to forego the trip to Cawker City, Kansas, to see the world’s largest ball of twine or hike the West Virginia Waterfall Trail, even though I’m told it’s almost heaven. When she asked about going to Africa and I said okay, it was the bottom of the ninth in a Yankees-Red Sox game with the Yankees holding a one run lead. I just barked an answer, not even hearing the question, to make her go away.

She did. Then brochures started arriving like stone crabs at Joe’s. The good news? The Yankees held the lead. The not so good news? Looks like I was headed to Africa.

As PFC Pyle would say, “Surprise, surprise.” Our 2016 trip was an absolutely terrific experience. After spending a rest night in a five-star resort in Johannesburg, South Africa, something I could readily identify with, we then went out to the bush on safari through Botswana, Zimbabwe and Zambia. I wasn’t too certain if it would be up my alley or not. It was. In fact, it was so fantastic we promised ourselves we would do it again for our 30th in 2021.

Well, Covid turned ‘21 into ‘22 and off we go again on Tuesday. We kicked around visiting another part of Africa, namely Kenya or Nigeria, but we had such a fondness for Botswana and its people it was hard to get interested in any place else. The Botswanans working the safari camps, or properly called reserves, make about $300 a month; they don’t know any differently. They are constantly singing, dancing and smiling. They make the world a better place. Plus, whenever you do something a second time you see so much more than what was apparent by the novelty of the first. 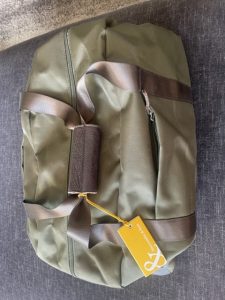 Our tour operator of six years ago, Abercrombie & Kent, is back handling this journey for us. We literally never had to touch our forty-four pound special duffle from the time we landed in J’Burg until it was time to return home. Top notch all the way. And that’s all you get to take: one tour operator-supplied duffel bag, forty-four pounds max for the twelve days, so the single engine planes we fly from reserve to reserve have proper weight balance. Laundry every night and the fashion police nowhere in sight means you can get by with one bag.

We stay in luxury tents. A couple of walls and a canvass roof. No a/c, no heat. Next week is still winter in Southern Africa, which means temps in the low 80’s during the day and 40’s at night, a great time of year when the animals are rambunctious with the morning cool. A sweatshirt, maybe a couple of long sleeved tees and my very dependable, worn daily conversion pants that, like an NBA player checking into a game, can be ripped off and become a pair of shorts. And jeans for dress up dinners under the stars. That’s it. No room for anything else except my Medjet membership card, just in case.

We’ve gotten our shots: typhoid, yellow fever and hepatitis. Truth is they will probably protect us more next time we go to dinner on the Strip than in the Zimbabwe jungle. Started taking Malarone for malaria, or actually to prevent malaria, yesterday and will continue straight through two nights after we get home.

Andi’s camera had a tune-up. She is an amateur photographic genius. Every wildlife picture on this page is her’s and same for the video she put together that is linked below. Whether you’ve been on a trip like this or not, it’s worth a look. It’s that good.

Last time we went, we drove the two hours from Birmingham to Atlanta and then went non-stop ATL-JNB. This year our routing is Vegas-Newark-JNB. The flight distance to Johannesburg is about the same from both hubs: 7900 miles from Newark, 8400 from ATL or about 15 hours give or take. It’s among the five longest non-stops in the world. It’s a very pleasant fifteen hours that really only feels like fifteen hours. It’s long enough for about seven movies and one really good blood clot. 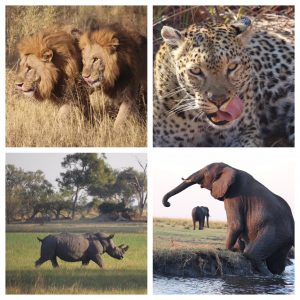 This trip will be difficult to top the variety of jungle animals we saw last time because we saw them all. The Big Five as they are called: lions, elephants, leopards, Cape buffalo and rhinos, both black and white. It’s a power conference all to its own. Not to disparage the cheetahs, impalas, zebras, baboons, monkeys, wildebeests, wart hogs, giraffes and hippos. There was more of an array of birds than at the Bates Motel. A good guide, like we had in 2016, knows the key places and key signals to find every animal in the bush.

Unlike at Lion Country Safari, where if an animal gets too close they get prodded back by an attendant, in the bush all bets are off. The animals could care less about us as long as we don’t do anything stupid, like yell or taunt. Wearing neutral colors is encouraged. They are a bit intimidated by the size of the safari vehicle and really don’t present much of a threat unless baited. Often, the Land Cruiser pulls right up to a breed resting and the animals, in their very own way, pose for the iPhone.

Out of nowhere, the serene setting changes in a hurry when one breed charges another in what’s called a “kill.” The fascinating part of nature is the breeds take care of their own numbers of population and don’t need big game trophy hunters doing it for them. Fortunately, hunting for dough has been outlawed in most parts of tourist Africa. On the African plains there’s a pecking order: top of the chain are the lions with the zebras normally the daily stew.

We can’t leave our tents at night nor walk unattended back from the main building after dinner. Too dangerous. In the camps there’s only a dozen or maybe fifteen travelers and an escort at night with a flashlight is mandatory. We’ve had lions run past our tent at dawn and one morning woke up to a donnybrook of baboons on our roof, fighting over who-knows-what. Four of the baboons received game misconducts. 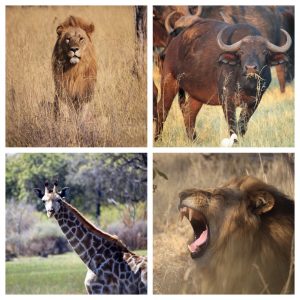 The vehicles carry six passengers, not including the guide and his helper, armed with a shotgun just in case. Andi and I went by ourselves in 2016 and were matched up for the week with young newlyweds from SoCal and a 40’s something couple from Austin, Texas. The honeymooners were fun. About two days in, we nicknamed the guy from Austin “Final Jeopardy!” because there wasn’t anything he didn’t pretend to know. The eye rolls from Mrs. Final were classic.

This time I don’t think the company will be as enjoyable. A friend I play baseball with from Yankees and Pirates camps said if we ever go again, he and his wife would love to go with us. Yea, sure, we’ve heard that before. Except Mike ‘Labs’ Labanowski was serious. He kept asking me about the trip and I kept ignoring him hoping he would go away. Finally he texted Andi. She has no poker skills whatsoever and gave him every detail. He’s a pain in the ass. A Polack who took a $1.99 Polish genealogy test now claims he’s 3/64 Jewish so he can make Jewish jokes like Dr. Tim Whatley, the Jewish convert dentist, on Seinfeld. The problem is Labs can’t spell schtickle of fluoride if we spotted him the s-c-h-t-i-c-k and l.

We’ve played baseball together since 2014 and have fostered a friendship. I’m not sure why. Nobody else we know does either. He never stops yakking and unlike Kevin Bacon, there’s only one degree of separation between Labs and everyone else on earth. Just ask him. He lives in Tampa. The best thing I can say is he has the liveliest arm of any shortstop I’ve ever caught at first base even as he readies to turn 61. Nobody knows what he does for a living except he travels every week, most times playing baseball. His profile says he is president of something called MELCO Enterprises. Best any of us can figure it’s like George Costanza and Vandalay Industries.

Labs and Mrs. Labs said they were going. They let us pick out the area of Africa we wanted to travel and said they would follow our lead. They put down their deposit and booked flights when we did last October. 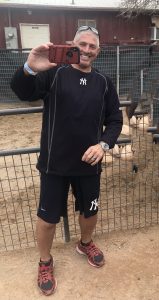 Labs never turns down an opportunity to take a selfie of Labs.

When it came time to make final payment in May, Mrs. Labs decided she didn’t want to go after all. I figured when she weighed 12 days in Africa with him or a dozen days at home without him, there really wasn’t any decision to make. When he told me, I let out a great big ‘whew’ figuring he was out too. Then he said something I still can’t believe: “Do you mind if I tag along with you?” Huh? WTF? Are you kidding me? I had my out and now it’s only gotten worse. What could I say, ‘No, please stay home?’ At least he didn’t suggest sharing a tent. Not that I heard anyway. Twelve days with this guy solo? Please just put needles in my eyes instead. Happy 31st anniversary to us, eh?

Of course Andi had no problem with it. She actually likes the guy. Of course. Then she made it worse by telling him we’d love to have him with us. The trip of a lifetime, part two, with my wife and now it’s the three of us? I can’t get a daily newspaper over there, but I get a daily dose of Labs? The good news is traveling with Andi and Labs for almost two weeks is like incessantly listening to talk radio. Both of them ramble so much, I’m off the hook for any small talk.

Last week Labs asked for some safari suggestions. I gave him a couple. I told him to wear a bright orange shirt and when we see lions or cheetahs or leopards and pull up next to them, start jumping up and down and yelling as loud as he could.

If you have few minutes, pour another cup and enjoy our 2016 safari through Andi’s lens: