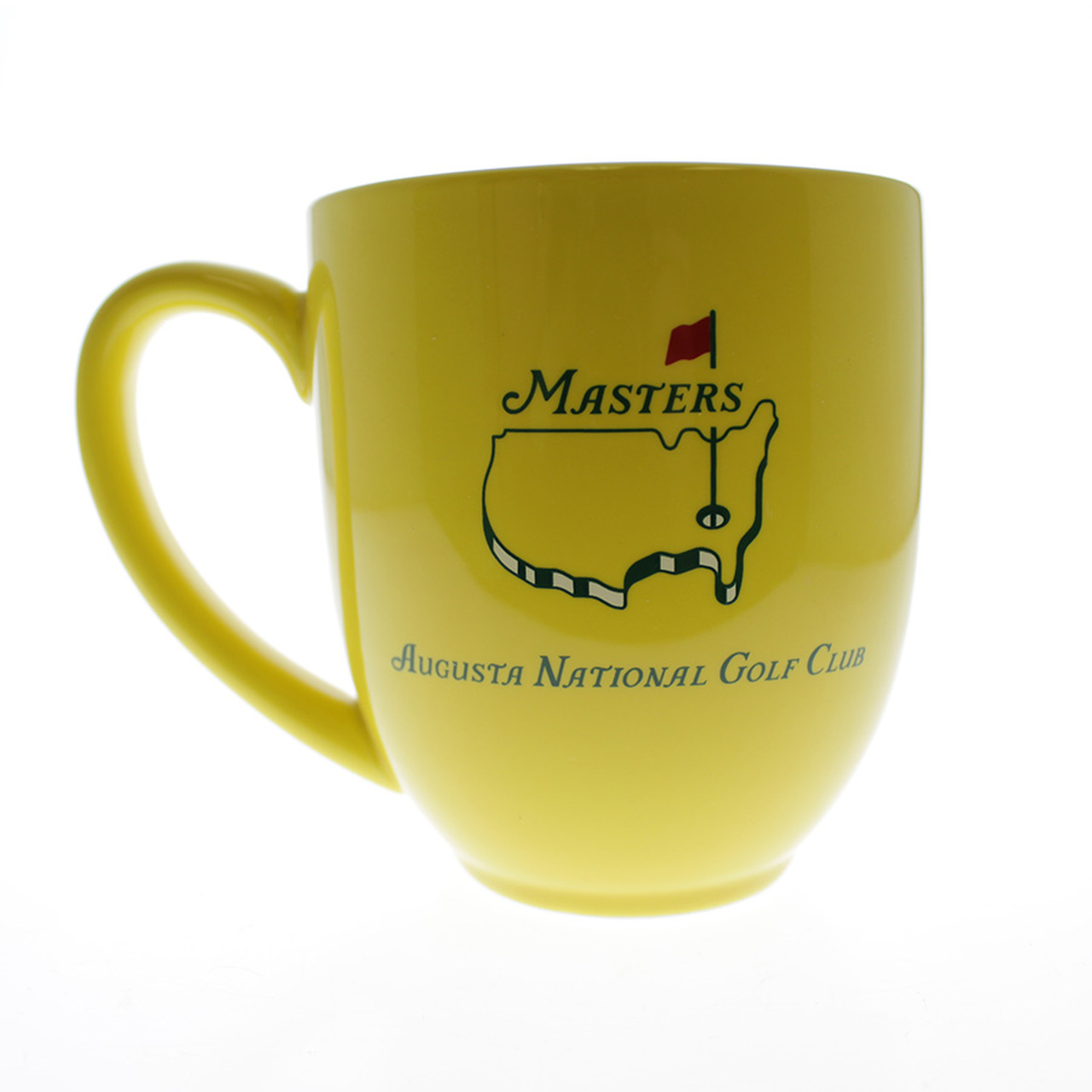 Once upon a time, back in the olden days BC, before coronavirus, when department stores, eat-in restaurants and movie theaters were open, this used to be my favorite Sunday of the year. Now, like the Jews fleeing Egypt in such a hurry they left behind their rye bread and good wine, I awake this morning barren.

Yes, today is Easter Sunday and blessings to all who celebrate. Same for those counting down only three more days of Passover when once again toast with breakfast, a good sandwich for lunch and doughy rolls with dinner will be back in favor. Those holidays are wonderful but let’s face it, today is the holy grail on the spring sports calendar. Today is Masters Sunday. Or it used to be.

For 20 years I relaxed on our elevated screened-in back porch, overhanging into the woods, of our Birmingham, Alabama, home watching the Masters. A nice, long Montecristo smuggled in from Cuba, chased by a tall Diet Pepsi on the rocks. Oh, those were the days. But they’re gone now. The cigars taken away by a cardiologist who, after my cinco de bypass, told me not to smoke. I should have gotten a second opinion. Almost simultaneously, I lost taste and desire for diet pop and haven’t had one since. And the final kick in the rear was when we sold our Birmingham house and the buyer wanted us to include the porch in the deal. I hate when that happens. 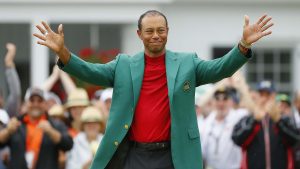 Sadly, there will be no green jacket ceremony tonight.

I do believe if there is one American sporting event that could have successfully managed playing this week, among all the confusion and indecision, it’s the Masters. I understand they had to make the decision weeks ago when they did, but if you are looking for a sport that social distances itself, golf is it. If you are looking for a sport to be played without a spectator gallery, golf is it. If you were ever looking for a statement to the American people that better times are just around the corner, playing the Masters this weekend would have been it. And if CBS and Augusta National were looking for the most watched telecast in the history of television, playing the final round of the Masters today with Tiger defending, would have been it.

Sure, keeping the Masters on the dance card this week would have necessitated all sorts of hoops, precautions and trick shots. And no matter how it turned out it wouldn’t have been enough to quiet the cynics. And of course just one C-19 incident would have smeared the fine and noble name and reputation of the prestigious event. But playing a make-good in November? The golf course won’t play the same in the fall as it does in the spring and the azaleas won’t be blooming either. And competing with football for ratings on Saturday and Sunday? I don’t like it.

Thus, a tip of the chapeau to our friends in the U.K. who last week canceled Wimbledon tennis and the British Open golf tournament because of the virus. I hate that too, but frankly love the fact that they aren’t interested in squeezing it into another window later in the year. Organizers of both events were smart enough to purchase catastrophic pandemic insurance in the London insurance market which means cancellation allows them to collect on the policy whereas a postponement wouldn’t. Sports business writer Darren Rovell posted on Twitter that Wimbledon, for the last 17 years, paid $2 million in insurance premiums a year to protect against an occurrence like COVID-19. Since this year’s tournament fortnight was officially canceled, the All-England Tennis Club will get a check for $141 million. Bloody smart.

Next up will be the NBA and NHL trying to salvage their seasons. The NHL playoffs were scheduled to start last week, the NBA next week. I say give it up. Cancel. Let’s move on to next season. The integrity of this season has been lost with the shutdown. Teams that resume play whenever the season starts again are not the same teams they were in March. Injuries, such a key part of the arc of the regular and postseason, have had a chance to heal and any momentum has been neutralized. Plus, in the case of the LA Clippers, the number one prima donna in the game- Kawhi Leonard- hasn’t had nearly enough rest.

Potentially, the NBA is talking about Las Vegas as a site to try and complete the season. If it can be done, this is the place to do it. There are six venues within two miles of each other that can play games around the clock: T-Mobile Arena, The Orleans Hotel, MGM Grand Garden Arena, Mandalay Bay Events Center, and two on the UNLV campus- Thomas & Mack Arena and the Cox Pavilion, which hosts part of the NBA Summer League schedule. There are also over 100,000 hotel rooms sitting empty that would love to have masked NBA players, coaches, officials, administrators and the media milling around the lobby, socially distanced of course. 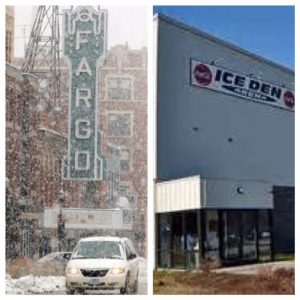 Who wouldn’t want to watch the NHL playoffs in Fargo or at the Ice Den Arena in Hooksett?

The NHL is a bit more challenged. Unlike the NBA with all 16 post season spots just about decided, the NHL has too many playoff spots still up for grabs; they would need to find a way to complete a balanced schedule before moving into the postseason. Rumors have the league looking at the University of North Dakota in Grand Forks and Southern New Hampshire University in the equally thriving metropolis of Hooksett as potential arenas to resume play. Huh? This past Friday word emerged the NHL is also looking at Saskatchewan to add to the plan. Are you kidding?  All three sites might have a low density of population helping neutralize a contagious illness, but all three of them are logistical nightmares. The NHL wants to know why they can’t capture the mainstream sports media? It’s ideas like this. Imagine the brouhaha for what team will get to stay at the Grand Forks Fairfield Inn? Maybe it’s too simple for the NHL to look at the four buildings in metro New York, where the COVID-19 curve will certainly be on the downslope, and the national media stationed in NYC salivating for something to write about, by the time they consider getting back to play – Madison Square Garden, Barclays Center in Brooklyn, Nassau Coliseum on Long Island and the Prudential Center in Newark. A fifth is only 90 minutes away in Philadelphia. And a sixth is 115 miles up the interstate in Hartford, CT. If you are intent on playing and you need an extra week or two for New York to be ready instead of Saskatchewan, Grand Forks or Hooksett, it seems like a pretty simple empty net decision.

On the other hand, reports say Major League Baseball is contemplating a couple of different scenarios, each one with merit unlike the NHL’s thinking.

One plan has all 30 teams beginning the season in Phoenix. Not only is PHX a major metro area with plenty of hotel space but within a 50-mile radius there are 10 spring training ballparks that can easily host big league games. Toss in Chase Field, home of the Arizona Diamondbacks and Arizona State’s modern baseball facility making it an even dozen. Games can be played midday, late afternoon and night. The only swing and miss might be the intense desert heat that picks up in June and lasts through the summer. Yeah, I know it’s a dry heat. Hot as hell, but dry. But heat or no heat, the good news about this idea is Phoenix isn’t Fargo.

The other scenario that USA Today reported on Friday was one I really like. All teams return to their spring training bases which means 15 teams go to Arizona and 15 to Florida. For this season the leagues would be the Grapefruit and Cactus, replacing the American and National, and the divisions realigned to three five-team divisions in each league. The ultimate winners of the Grapefruit and Cactus would meet in the World Series, probably in November, and who knows by then maybe they can return to their home cities for a true fall classic.

The Yankees and the Dodgers are the World Series favorites and this plan would keep them separated. Though the Phoenix area is easier for travel and Florida is a bit more spread out on the two coasts, travel would be very manageable especially in the aforementioned divisions. Also the warm weather in each location is supposed to be an aid to eliminating the virus. Games would be played initially with no fans in the stands giving a huge home field advantage to the Marlins.

Unlike the wacky NHL plan, both the NBA in Vegas and either of the two MLB scenarios makes sense.

And if anyone thinks the NFL and college football won’t be impacted this season then you are so 2019. In a poll released Thursday by Seton Hall University’s business school, 72% of those questioned said they would not attend recently resumed sporting events without a corona vaccine. If statistically sound that’s a lot of potential empty seats to worry about not only for the NCAA and NFL but across all sports and entertainment spectrums.

Many possible scenarios. A lot of questions. No answers. Not yet, anyway. Is it too late to play the final round of the Masters today?

We really need it.