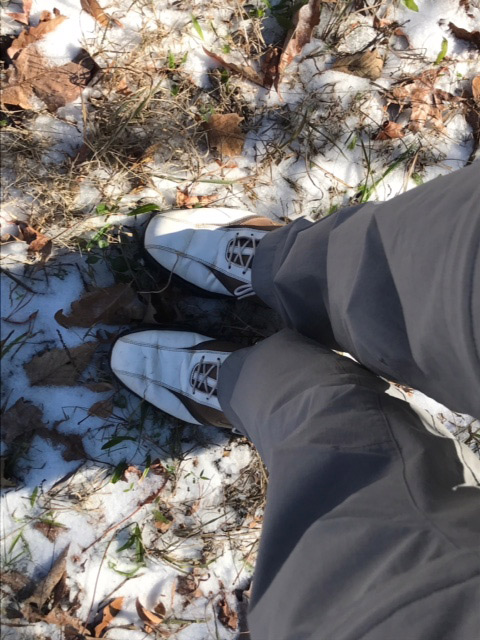 “Go ahead and put your golf shoes on,” my wife said to me.

Ah, that Andi Berger. Always looking out for me. Despite it being 19 degrees in Birmingham Saturday morning, with a wind chill of about nine, she wanted me to lace ‘me up. What guy wouldn’t give anything for a gal like that?

A day that started Friday afternoon in Las Vegas with a flight cancelation, ended so very close to hitting the jackpot right on our own driveway some twenty hours later.

Birmingham was about to get pounded with winter weather on Friday night. Inclement weather, particularly ice and snow in Alabama is like Hillary hosting a Twitter party for Donald. It just doesn’t work.

This town panics on forecasts and most times the guys with the white shirts and rolled up sleeves on television are never right. We expected this time to be no exception.

So with bread and milk gone off the Publix shelves, and the forecast for Friday night and Saturday morning to get pretty messy we said the heck with it and made a personal trip out west on Thursday knowing they’d be wrong about the weather.

However, Southwest believed them and canceled our return flight from Vegas mid-afternoon Friday before any of the bad weather hit. They were all a lot smarter than me. I guess if you are going to lose a gamble like this, you might as well be in Las Vegas.

So, instead we diverted and took a flight two hours later to Nashville, who a day earlier had seen the storm move through. I rented a car and even though we arrived at midnight, Andi said let’s head home. Instead, sanity prevailed and the Hampton Inn about five miles south of Nashville wound up our evening host.

The journey from the Music City to BHM is a normally an easy 180 miles straight down I-65. I was behind the wheel when we left the Hampton buffet on Saturday morning. The first 170 miles Stevie Wonder could have driven. The last ten anything but. Birmingham was iced over. Overpasses and interchanges a mess. At any minute I expected to see Peggy Fleming and Nancy Kerrigan in the rear view mirror doing double-Axels.

Me and winter driving weather don’t get along. I always figured that’s why they made subways. The only time I had any luck driving in ice and snow was in December, 1968 on Long Island when I took my driving license road test. It actually was my second driving test. I failed my first one because I couldn’t parallel park. Fortunately, two days before my second one, a blizzard hit New York. The snow was plowed to the curb. When it came time for the parallel park, neither me nor the inspector had any idea where the curb was. Go get your driver’s license, young man!

So today, with my hands literally sweating and my normal smooth disposition running a bit short, Andi guided me behind the wheel on proper movement at 20 mph to get the rental car back to the airport and claim ours.

That was the last bit of driving on the day I had any interest in. My wife took the wheel of our car and said, “let me show you how to do this.” I guess on the back roads of Western Kentucky, where Andi grew up, this was like a Sunday afternoon go-cart ride at the state fair.

The trip from Nashville to the Birmingham airport took about three hours. The ride from the airport to home, normally twenty minutes, took about ninety.

First we had to divert and do the most important thing on our collective agenda and that was to fetch Ibis from the sitter he spent an extra night with. Normally it’s ten minutes out of our way. I sat in the passenger seat stiffer than Bernie and more anxious than my first time on Big Thunder Mountain Railroad.

And though she had to drive about sixty miles an hour slower than she normally does, Andi got us there at a steady 30 mph, dodging and weaving the ice spots like Wayne Gretzky on a breakaway.

We collected Ibis, more interested in the treats in my pocket than the weather conditions. Then the adventure really began.

Wheels spinning and stuck on a feeder road to the main thoroughfare, Mario Andretti-Berger did some front moves and back moves and got the wheels spinning again with some traction to get us on normally what is the busiest highway in Birmingham (no wise cracks from NY and LA please). Cars were stacked to the side and some turned backwards in the middle of the road. It was bad, but nothing like Friday night on Interstate 20 outside of Birmingham, where two rigs jackknifed and traffic didn’t move for eight hours. Thousands spent the night sleeping in their vehicles. And I thought the bed at the Hampton was too hard.

Andi decided she was going to try and do her finest Mike Tyson bobbing and weaving to get through the wayward traffic and make it up a hill that one of every five or six cars made. She got on the grass median to not only advance, but to gain traction when we needed to get momentum up the hill. We followed three other cars on the median when finally everything came to a stop. Andi got out to survey the situation and chat with the other drivers. I stayed in the car; I wasn’t finished with the sports section yet. It was a win-win for both of us.

Yada, yada and a little more yada, we got through what was now starting to look like the third turn at Talladega. We also got over the hill, something that’s been said about me often.

An hour later the road, Highway 280, was at a complete standstill.

And of course the end of the story is 179.5 of our 180 mile journey was as far as we could get. Finally in our neighborhood, a completely ice-covered hill, shaded from the sun, was too big of a challenge for Andi to try and offset with the damage she could do to the car if we didn’t make it. She channeled her inner Roberto Duran and said ‘no mas.’ She said we are going to walk the rest of the way. Ibis, with his eighty pounds of fur, smiled. My car will sit on someone’s lawn until 2 pm Sunday when the temperature is supposed to hit 34.

I then played the rotator cuff surgery recovery card and Andi carried my bag home. Was that wrong?

Getting out of the car I slipped and was lucky enough to grab on to the door before taking an eight count. Andi opened the trunk, grabbed my golf shoes and said “put these on.” It was a suggestion of genius.

As we finally reached our house, damn my bag looked heavy, a neighbor was outside and she said “wearing golf shoes to walk in this weather, what a great idea!”

I told her I was really glad I thought of that.