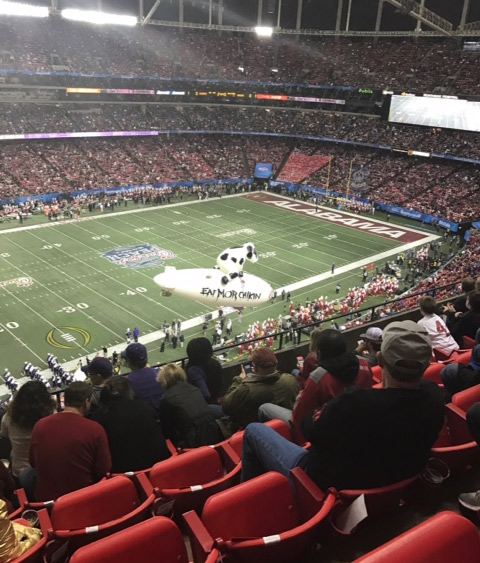 We haven’t been out for New Year’s Eve in probably a decade. Undoubtedly in our time together we’ve been there, probably done it and frankly we’re getting to old to revel until that wee hour of twelve.

But Andi Berger had a lousy 2016. She lost her two best friends to dreaded illness in the first ninety days of the year and I figured we were due a rockin’ good time.

Normally on NYE Andi’s out by nine and I celebrate midnight at 11 pm which you can do when you live in the central time zone and get eastern time programming. Who really cares anymore anyway?

So with Alabama football both passion and religion down here and Andi becoming quite the fan and wearing crimson on game days, I suggested we spend New Year’s Eve in Atlanta where ‘Bama was playing the University of Washington in the Chic-fil-a Peach Bowl, one of the two national championship semi-final games. Go ahead and tell me I don’t know how to treat a gal. I dare ya.

I received a confirmation from the Alabama football department three weeks ago that I qualified for two Peach Bowl tickets so I immediately booked a room for the night in Atlanta, a short two hour drive from our part of Birmingham.

Then the plan started to veer a bit off-course.

When my tickets arrived they were rather shitty seats, closer to the roof of the Georgia Dome than the hash marks. So just for kicks, I listed the tickets on StubHub at an inflated price to see if anyone was dumb enough to buy them. When I told Andi about the lousy seat location she said “it’s okay, you’ve spoiled me with good seats for twenty-five years, we can do it.” Whatever you say, dear.

Then the game was posted as a 3 pm eastern kick-off, which according to my fair lady negated any reason to spend the night away from Ibis when we could get to Atlanta and back in less than a dozen hours. Hotel promptly cancelled dear.

Honestly, the early kick-off did make it appealing to me too and as long as we had lousy seats I figured I would really push my luck and instead of driving all the way into Atlanta and forking over fifty quid to park, we instead went to the mass transit station on the edge of town and hopped on the train to the stadium. The parking was free and it’s nothing but the best for my gal. After all, what would Larry David do?

But a funny thing happened on the way to the forum, oops Georgia Dome. About ten minutes outside of BHM, on a rainy and chilly day with the wipers and seat heaters doing their job and Andi comfortably reading a book and me behind the wheel, my phone dinged with a message. I looked down. “Damn!”, I screamed. Andi jumped. “What happened,” she nervously asked. StubHub sent me an e-mail to tell my my lousy seats, which I listed for sale and totally forgot about, were just sold. Now we were all dressed up with nowhere to go.

I called myself every name I could think of, most of which I learned from my wife.

When I was finished with the verbal self-beating Andi said, “Let’s go back home.” I blasted back, “No freakin way.” I’m not sure we even stopped the car but I told her to get in the driver’s seat and let me get on my iPad and find us a couple of tickets for a game that now became an expensive and tough ticket.

Well, what were our shitty seats originally got a little better as I found two on StubHub a few rows lower, but still in the attic, and of course more expensive than the pair I sold to the bozo who paid big bucks to buy mine. Now the profit I just made on the original pair was squandered and even supplemented with more cash on the two I just bought. Go ahead, tell me I don’t know how to make a good deal. I dare ya.

Once I regained my composure and we made it to the ATL and got off the train, then walked a quarter of a mile through the pouring rain and arrived drenched at the Dome, we then had to schlepp up the stadium ramp, all the way up, to the top to get to our seats. As we approached the end of the walk, and now I was winded, my smart-ass wife said “We can’t walk any further, so that must mean we are here.” As we got to our seats she threw more wood on the fire with ” I’ve never been up this high, I’m dizzy.” Of course it didn’t help my case when the in-stadium blimp was flying below us.

But by the end of Bama’s 24-7 win, their 26th win in a row, Andi admitted, “you know I kind of like the view from up here, you can actually see things happen” Which meant to me she noticed plays develop and holes open. And not once did she ask where the yellow first down line was on the field. It probably didn’t hurt either that most of the game was played on our end and the ladies room was just outside our aisle seat portal. The view was so special you could also read what was written on the top of the blimp. Not many of the others in the record crowd of 76,000 had all these special privileges my wife did. Go ahead, tell me I’m not a special guy.

And even though today was the fifth time they’ve played, Alabama-Washington is a rivalry that has come full circle since their first meeting in the Rose Bowl of 1926 when Washington was the bully with a record of 10-0-1 which included a 108-0 win over Willamette. Unfortunately for the Huskie backers they were 109 point favorites that day against the Salem, Oregon institution. Bear Bryant was thirteen in 1926 and it was twenty-five years before Mary and Nick Sr. decided to name the newest Saban, Nick Jr.

‘Bama on the other hand were just a bunch country boys who played southern football, generally known then to be rather soft, back in the day when leather helmets were optional. Despite Alabama being 10-0, and out-scoring the opposition 276-7 that year, correct 276-7, the Rose Bowl first asked Tulane, Dartmouth, Princeton and Colgate (records don’t show Crest or Sensodyne fielding a team that season) to oppose Washington and they all turned the invitation down. The eastern schools were being criticized for putting football over academics while Tulane was worried about injuring their kids against the rough and tuff Purple Tornado.

So Bama, who never has favored academics over football, agreed to take the four day Amtrak trip which looked like a big mistake early as Washington rolled to a 12-0 halftime lead despite missing both extra-point drop kicks. The twenty-one hayseeds on the roster from Tuscaloosa retreated to the dressing room where a nutritious portion of grits and the stern drawl of head coach Wallace Wade awaited. Those in the crowd of 5,000, who paid a buck and a half a ticket, started to feel bad for the boys with the burnt red on their necks and before they could say “I’ll have another serving of collard greens,” Alabama was on their way to a stunning 20-19 win and their first of 16 national championships with number 17 on-deck. It’s a football brand of excellence that started that day and keeps growing.

And yesterday’s Alabama win did many things. It was their fifth victory over Washington in as many meetings since that 1926 clash. We can assume by now Washington has stopped laughing at the backwoods lads. More importantly it put Alabama back into the National Championship Game for the second straight year in a rematch against Clemson who they narrowly beat 45-40 for last year’s crown. The fact that there’s a razor thin margin each week in college football between being a champion and an also-ran, it makes it even more remarkable that both teams from last year are back again. And at the top of my list from yesterday’s game was we got back home before eight. Andi was asleep by nine. Me at five past eleven. Just like old times.

I’ll follow Bama to Tampa on January 9th for the BCS Championship with four other guys from Birmingham and my son Scott who will fly in from LA. We’ll charter a plane for the 90 minute flight and have prime seats. Scott has made me swear I won’t test the market and list them on StubHub. I reluctantly agreed.

I plan on telling Andi we’re driving the twelve hours to Tampa and our seats are so high I can suck in the fumes from the fly-over. Go ahead and tell me I’m not smooth.