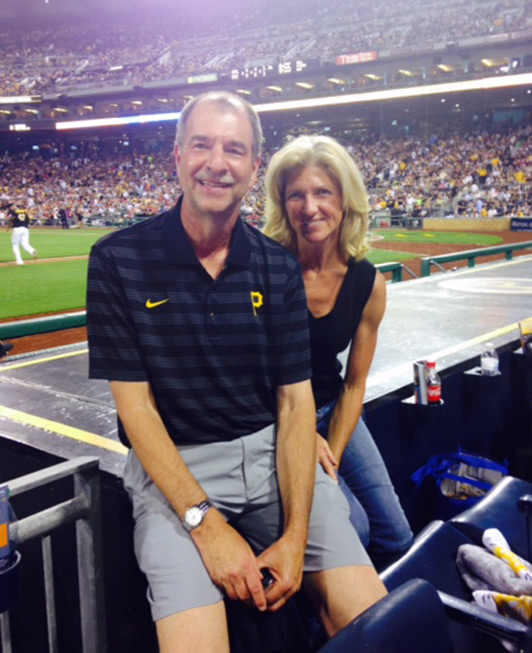 A great baseball birthday week in Pittsburgh, not often said by non-Pittsburghers, ends with the reality of my first Mother’s Day without my Mom but a new appreciation for many things in life thanks to the prose of the late Stuart Scott.

Friday night with Andi Berger at PNC Park for the Pirates and Cardinals in a pair of seats right next to the Pirates dugout, a baseball setting second to none, with the city looming handsomely on the horizon. Earlier in the day it was a wonderful afternoon of playing old-guy ball in surburban Upper St. Clair – a charity event called ‘Field of Dreams’ organized by two former Pittsburgh area service officers and good guys- Kevin Kubala and Bill Sirakos. It’s a pay-to-play event with all monies raised going to Pirates Charities for kids. The day even featured a surprise birthday cake, probably much out of fear of being dropped from the coveted Facebook birthday ‘list’.

Saturday morning was the main event with Pirates fantasy camp alumni getting to play in the major league setting of PNC Park. I was player/manager of our team and got outwitted by Mr. Kubala, 3-0. The deck was so stacked in his favor, he should have beaten us by 13, so we consider it a win.

Sure it’s make believe but who cares? You can look around and see the joy on the faces of the other 50 and 60 year old kids playing in front of almost 38,000 empty seats. We took consolation that there were more watching us on Saturday than the Orioles and White Sox had in Baltimore on April 29. The morning was gorgeous, the grass was green, the power-washers and maintenance crew were getting ready for the evening’s Pirates-St. Louis game, the stadium music blared and the sweet sound of PNC in-game host Joe Klimchak introduced you when you came to the plate.

In my only at-bat, I smacked a Keith Bertetto off-speed pitch (in our game, everything is off-speed) high in the air; for a minute I thought it would hit the right field scoreboard. Unfortunately, Ana was blowing off the Carolina coast and not giving me the western Pennsylvania gust I needed. The ball fell only about 200 feet short of the wall. Right into someone’s glove. I hate when that happens. It is proven your bat speed slows down when you hit your 63rd birthday.

The weekend however was a perfect time to reflect on life. If you have your health and your family and if you take any of it for granted for even one minute (and admit it, we all do) then do yourself a favor and read Stuart Scott’s memoir- Every Day I Fight. If you’ve never taken it for granted, it may even be a better read.

You don’t have to be a Scott fan to appreciate, agonize and respect the physical and emotional battle the former ESPN anchor fought before passing away last January. And for those that never cared for his hip-hop style it doesn’t matter, this is truly one incredible story and one that I promise will consume you for a couple of hours. Even though you know the ending, it was a magnificent piece of work. For me, it gave new meaning to a lot of things.

So it’s a weekend like this one, even if it’s your first Mother’s Day without your Mom, that just for a second you want to pause and give thanks for what you do have.