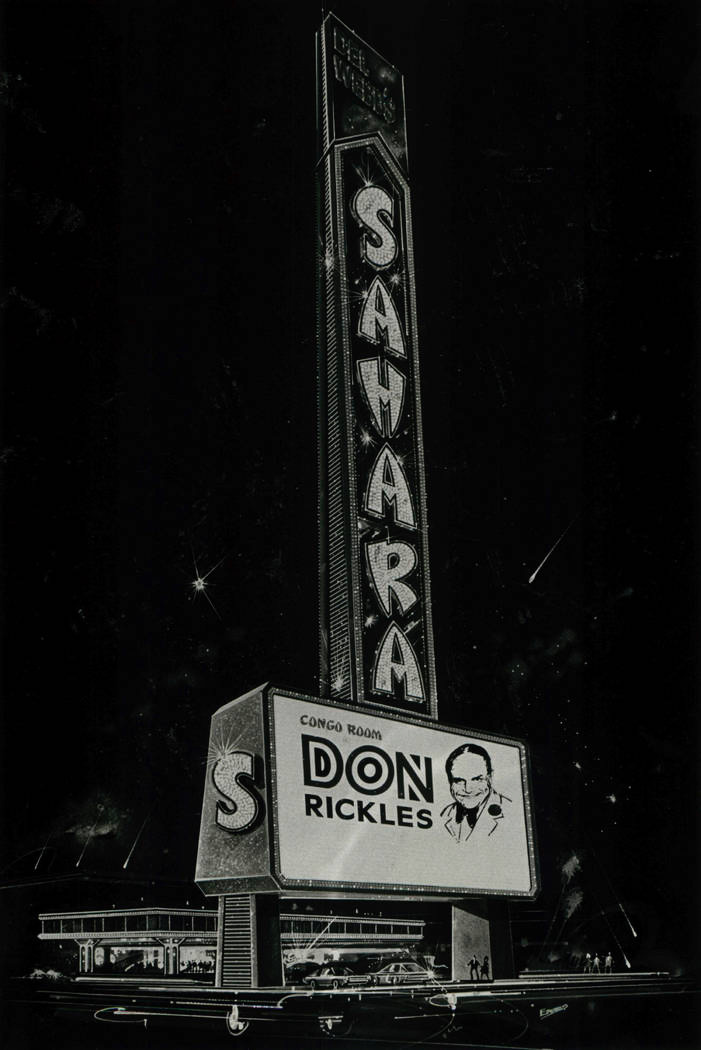 Passover seders were a little less jovial this week than they’ve been for the last 90 years.

Mr. Rickles was not only the funniest man I’ve ever seen, he also was the biggest gambler I’ve ever seen. And that’s one helluva statement from a guy who was in the racetrack business for 35 years!

But there was never a bigger wager cashed than by Mr. Rickles on a warm Miami Beach night in 1957.

Rickles was doing his funny-stuff gig at Murray Franklin’s nightclub, but it wasn’t funny at all. He was 31 years old and floundering as a stand-up comedian. Like any other Jewish boy, his mother was always looking out for him. Somehow there was a connection between Rickles’ mom, Etta, and Dolly, Frank Sinatra’s mom. Mrs. Rickles asked Mrs. Sinatra for a favor: could she convince Frank to go and see Don’s act?

Nobody knows whether Rickles knew Sinatra was going to be there or not. Rickles started his routine, and in marched Sinatra with his entourage. Rickles made the biggest bet he could. He didn’t hesitate. He gambled not only his career, but maybe his life as well.

He looked at Sinatra and stopped. “Make yourself at home Frank, hit somebody,” he deadpanned. Sinatra roared with laughter. From that moment until last Thursday, a star was born. Just as easily, that night, a comedian could have died. Literally and figuratively.

Rickles quickly adopted “insult humor” to replace his lackluster stand-up routine. And Sinatra loved him both on and off the stage. Rickles, it’s said, became an ad-hoc member of the Rat Pack: Sinatra, Dean Martin, Sammy Davis Jr., Peter Lawford and Joey Bishop. That was his ticket to connections and the big time. 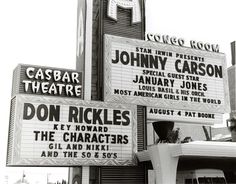 Circa 1960- while the top talent like Carson was in the main Congo Room, Rickles was an upstart second tier act in the Casbar.

His meteoric rise really began two years later in the Casbar Lounge at the now extinct Sahara Hotel on the northernmost end of the Las Vegas Strip. The Casbar was a holding area for second-rate talent not good enough to perform in the big Sahara showroom, The Congo Room. Rickles, almost from the moment he took the Casbar stage, was hot stuff. People lined up through the casino hoping to get a seat at one of his two nightly shows. You could probably shoehorn a couple of hundred people in the room if you packed them wall-to-wall. If you couldn’t get a seat, you could always hope to stand outside and peer in through the open entryway. He became so popular that the Sahara did something unheard of back in the day – they put a cover charge on the lounge act. It costs five bucks to get in and see him. Rickles now thought he was hot shit, and he was. It wasn’t long after they promoted him across the slot machine floor to headline on the main stage in The Congo Room where you’d find the likes of Sinatra, Johnny Carson, Milton Berle, Andy Williams and ultimately, of course, Don Rickles.

It was the mid-70s before I got to The Casbar Lounge for the first time and Rickles was long gone, now firmly entrenched as a headliner on the world’s biggest stages. But the Casbar will always leave an impression in my Vegas-mind of the good-old-throwback-days. It was a great room. It was half-filled scotch glasses, smoldering cigarette butts, empty seats and enough silicon to fill a valley. It was musician/comedian Pete Barbutti rolling them in the aisles, two, sometimes three shows a night. It was quasi-seedy and just what you imagined Vegas to be.

I discovered Mr. Rickles in the mid-60s long after he left the Casbar for the Congo. While the cool kids on the block were bragging about how many times they saw the Stones, or Hendrix, or Joplin, or the Dead, I was going to Rickles shows and also staying up way later than I should to catch him on Carson.

In 1968 when The Stones released ‘Beggars Banquet’, Hendrix recorded ‘Electric Ladyland’ and The Dead gave their heads’ ‘Anthem of the Sun’, high school sophomore dweebs like me and my good buddy Gary Dworetz never stopped listening to our 33 1/3 vinyl of ‘Hello Dummy.’ The Dead be damned, we were Grateful for Rickles!

His style was a precursor to Archie Bunker. Except Archie never showed remorse for what he was saying and thinking. After seeing Rickles for the first time, he was always was a part of me. If I could get a zinger off ala Rickles at someone or something I would, and I still do. Don Reckless was never mean. He never cursed except for maybe a word or two in Yiddish. He never picked on those who were underprivileged or handicapped. As much as you said you didn’t want to sit in the first row at a Rickles event, you really did. You wanted him to call you a ‘hockey puck.’ He always apologized as the end of his act reassuring everything was in fun. He picked on the little guy as well as the President of the United States. “Am I going too fast for you, Ronnie?” he asked President Reagan at his 1985 Inaugural Ball. He always left the stage by reminding us how important it was to laugh at ourselves. He was right. Now more than ever, it’s a lesson we need today.

And for Mr. Rickles, his schtick wasn’t exclusive to the stage or television. His rabbi in Los Angeles, David Wolpe, remembers the days Rickles would come to synagogue for Shabbat service. As Rabbi Wolpe would march the Torah among the congregation before his weekly sermon, Rickles would lean over and tell him in a stage-whisper, “Keep it short Rabbi, keep it short.”

My entertainment money went to see Don Rickles. I’m not sure how many times– maybe 12, 15 or 20. I caught his act in New York, Vegas, Miami and California. Whenever I could. Sometimes on consecutive nights. All the shows were generally the same; 80% of it you saw before, but it never mattered. As my brother Mike, he too a Rickles-holic said, “I laughed so much, I always walked out in a sweat.”

In March 2008, while visiting our sons in LA, Lori Otelsberg, a long time friend from my mid-1960s summer camp days, invited Andi and me to go see Mr. Rickles, who was headlining in a casino north of Santa Barbara. Lori is a prominent talent booker and this was her show. Being invited to see Don Rickles is one thing, being told you have an invitation to meet him supersedes anything else! For that invitation, ‘no’ wasn’t in my vocabulary.

So, there I was being escorted by security to his dressing room about an hour before the show. He was a month short of 82 but looked like Don Rickles always looked to me: like Don Rickles. Except I’d never seen him in a bathrobe before. There were four of us in the room– Lori, Andi, me and his honor.

Rickles probably asked himself ‘Who is this hockey puck and how much longer do I have to sit here and listen to this?’

His first line, while not quite Sinatra-esq, stopped me in pre-handshake mode. “What’s a Jew doing in Alabama?” he wanted to know.

Clearly he was prepped for his incoming guest. We were in there for ten, maybe 12 minutes. He was cordial, gracious and despite what the picture looks like, engaged in our conversation.

Of the many, many times I had seen him, they all tend to run together except for his August 9, 1974 show at the Westbury Music Fair on Long Island. It was the day President Nixon resigned and I vividly remember being at Rickles’ show that night. He remembered it, too; the show, not me being there.

The rest of the conversation was chit-chat, save of course, for the number of Jews living in Alabama. I also got Don Rickles to laugh at something I said when I admitted the influence he had on me to try stand-up myself. Eight humiliating performances in Birmingham and Atlanta told me I was much better suited behind a desk. He let out a guffaw and said ‘it ain’t as easy as it looks.’ No kidding.

Andi said she had never seen me “in awe” of anyone or anything until that moment. She was right.  It was ten months before I met Bill Mazeroski.

He took his bathrobe off, put on his trademark tux jacket and went on-stage in front of a packed house of a couple thousand. Most were too young to remember him during the heyday and some probably had no idea who he was. It didn’t matter. He killed that night like he always did. Mentally still tack-sharp but physically slowed. While never graceful, he used to constantly be in motion, sometimes with a fairly quick gait across the stage. This night his 81 year-old body stood almost on the X-mark and never moved. Part of his act always included dropping his microphone a couple of times during the show with a loud thud and crash for effect when it hit the floor. He still did it but a stagehand came out, picked it up and handed it back to him. They made it seem like a part of the act, not age.

It was the last time I saw Mr. Rickles. He kept going for eight more years and as recently as a few months ago, at age 90, you could still find him insulting the masses at the Orleans Hotel, off-Strip in Vegas. Both he and his audience seemingly could never get enough of each other.

Sometimes you go through life and are touched in some small way by people you don’t know nor will ever meet. Don Rickles is one of those that touched my life.

I’m lucky though. I got to meet him.