Top of the League 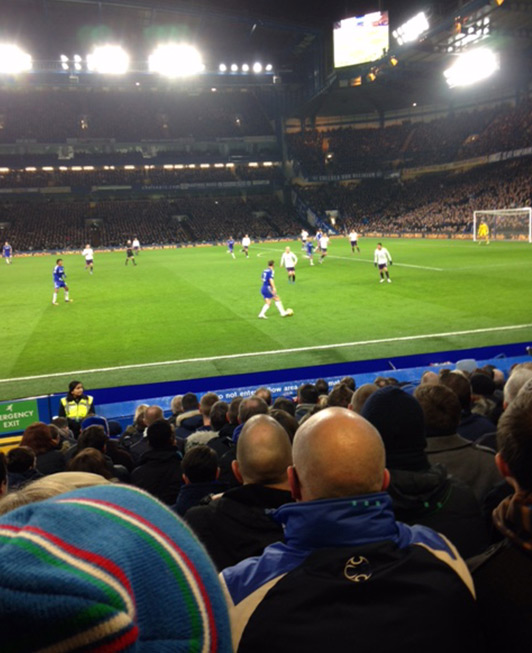 Being American and a sports fan, I got it honest so-to-speak. Like the rest of us, I’m not much of a soccer guy except World Cup once every four years.

However, 2014 was a pretty good year for me to cross off events on my get ’em done while you can list. I got to go to Augusta National, Wimbledon and see the New York Rangers play a home Stanley Cup Final game for the first time.

Soccer to most Americans is like reading a rental car contract. Yet there’s something about watching a World Cup match that keeps me glued like the rest of mankind. I’ve heard stories for years about the English Premier League and the fanatics who follow it. National colors aside, it’s the game’s big time. Having done business with Lloyd’s of London for over 16 years, I’ve become a casual observer, if nothing else to keep up with the pub conversation of the blokes I go to visit every year for my Medjet business.

While as a whole, we know nothing about sport if it doesn’t happen in Yankee Stadium or Fenway Park or Madison Square Garden or Lambeau Field, you have to give the Brits credit as they are very well versed in all of our sports with perhaps the exception of the roster of the Columbus Blue Jackets. That’s okay, we’re not either.

So I was invited by one of my Lloyd’s colleagues- Charlie Boyd- to come over and see a ‘real’ sport. Charlie is a longtime supporter and season subscriber of Chelsea FC, who this year is the best of the best. They were hosting Everton on Wednesday night. My schedule cooperated and the next thing you know I’m poring over the Premier League standings and statistics wondering how anyone in the 20 team league can catch Chelsea with a seven point lead and only 14 matches to play. I’m pretty certain I was the only one in Birmingham, Al. who had that concern.

Before I left home Monday, I tried to de-brief all I could. I went to my soccer-expert Rolodex, which numbers three, for advice and tips. Brad Shore, former Wichitan, posts regularly on Facebook about the footie and knows his stuff. I asked him to put Chelsea-Everton in NFL terms and he said it’s New England and Buffalo. My London soccer expert, William Waddell-Dudley, a certified Chelsea hater said Chelsea are more like the Dallas Cowboys. Either way I think I got the idea of a quality team with both a huge fan base and maybe even a larger distaste circle.

Michael Lewis was a high school classmate of mine a few penalty kicks ago and went on to a journalism career as an internationally renowned soccer writer. He recently left the New York Daily News and now writes for Newsday. He admitted it’s been a few years since he covered a Premier League match but remembered the hamburgers were very good at Chelsea.

There is no salary cap in the Premier League and both Chelsea supporters and detractors will agree that Chelsea owner Roman Abramovich, a Russian billionaire, has loaded the deck by outspending anyone else for players he wants. It was the way the Yankees of the 1990s were built by George Steinbrenner before the Red Sox started whining and salary tax soon followed. The Boston bastards.

Thus as you enter Chelsea’s home field- Stamford Bridge stadium- and see the lads getting loose on the pitch, there is only one Brit on the home roster: rough and tumble captain John Terry, who I actually heard of from the national team. The rest of the Chelsea team is virtually an international all-star roster. Middle of the pack Everton had a very familiar face in their line-up- Tim Howard- the goalie for the cinderella 2014 U.S. World Cup side who carried the team on his back, advancing through the preliminary rounds when nobody thought we had a chance. Howard, 35, of New Jersey earned the moniker of ‘Secretary of Defense’ in the World Cup and his bald head, yellow jersey and dark beard were very prominent pre-match Wednesday night.

Stamford Bridge, a bandbox of a stadium by our standards, seats 43,000 and is located in Fulham, not very from from central London, just about smack in-between Harrods and the Wimbledon tennis grounds. It dates back to 1877 as the men’s room furnishings testify.

And fascinating to me, per my former career, is they raced greyhounds right in the middle of the stadium until 1968.

The game itself is swift. Two hours and finished. Two 45 minute running time halves, with a 15 minute intermission. Maybe an additional three or four minutes tacked on at the end for ‘extra time’ for injuries and delays. No frills in the stadium. Two so-so American substandard video boards that show live action but for any controversial replay, you must look behind you on small monitors as they are not shown to the masses. No music, no bands and no silly spectator scoreboard games. It’s a soccer match, plain and simple.

You won’t find any statistics thrown at you during the contest nor, incredibly, can you drink beer at your seats. You have to drink it on the concourse before returning to your space. Personally that was shocking and disappointing to me, not because I need beer, but because my image of the English soccer fan and the resulting hooliganism got blown up by one rule. It’s that way in every stadium in the league.

However what you can do is make a wager on the contest right inside the stadium with legal betting booths scattered throughout.  How long will it be before we can get the Jets and points at the Meadowlands?

Each visiting team gets 4000 tickets located in an enclosure that the home fans don’t have access to, trying to minimize fraternization and temptation. Everton followers traveled about two hours to London. Additionally, the visitors are given their own private entrance to the stadium and greeted by bomb sniffing dogs and scanning wands. The home team fans just walk right in. The extra attention is very hospitable of the home side to personalize the welcome for their visitors.

Our seats were terrific- about a dozen rows off the field on what would be about the 30 yard line. The stadium is so compact that a portion of those in the first row could literally reach out and touch the players during throw-ins and corner kicks. And both benches are recessed into the stands so no sight lines are compromised. The seats are packed together, helping to ease the 35-degree temps.

The match kicks-off promptly at 7:45 pm following introductions that paralleled a middle school graduation ceremony. And as soon as the ball was kicked, 38,999 fans (not including the 4000 from Everton and me) starting singing:

About 10 minutes into the match even guys from Alabama were humming the tune.

Dozens of wagering options were available right on the grounds, most of them final score and margin of victory based.  A lad named Willian, no typo, put one past the Secretary of Defense in the 89th minute for a 1-0 home team win. Without Tim Howard, Chelsea easily would have scored three or four goals which is about 60 points in the NFL.

Despite the lack of scoring I must admit, in a game I would have shut off on TV, I found watching the entire field to be fascinating. Charlie Boyd tutored me in strategy- stuff I wish I would have known when I coached son Jason’s six- year-old team 20 years ago. The longer the match lasted scoreless, the more intense it became. It ends after 90 minutes, tied or not so Chelsea squeezed in the winner with virtually no time remaining.  And most incredibly I even stayed for the whole game, not remembering the last time that happened.

And then as one, Stamford Bridge empties on the final whistle. When the home side wins you of course walk out singing. The chorus dujour was: ‘We’re Top of the League’. Just keep chanting it as you walk. ‘We’re Top of the League’. Over and over. Louder each time. As a Jets fan, I’ve waited 46 years to croon those words. Figuring I don’t have another 46 remaining and nothing in the Jets future to indicate otherwise, I thought what the heck and joined in. It felt really good to be ‘top of the league’ for once, even if I had to borrow it for a night.

Birmingham pal Adam Cohen, a closet Premier League fan and West Ham (nee Oakland Raider type) supporter, told me that the Premier League atmosphere will be better than any college football game I’ve ever been to. I’m not going to debate it but if it’s Alabama-LSU or Alabama-Auburn and it’s 45 minutes from my driveway, that’s where you’ll probably find me next time.

Except I won’t stay to the end.