There’s nothing funny about 39 either 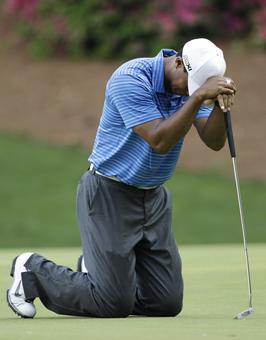 Watching Tiger Woods get eliminated from the U.S. Open on Friday, for those old enough to remember, was eerily reminiscent to Muhammad Ali’s last fight in 1981.

Even if you didn’t like either or both, their skill set and one time dominance over their respective sports shouldn’t conjure much debate.

They were kings, intimidators and truly the class of the field at their career apex. However, their 39th birthday’s were not too kind.

Ali was so deteriorated in skill and cognitive function, that no United States boxing commission would license him to fight the late Canadian/Jamaican Trevor Berbick on December 11, 1981. Thus the fight was moved to Nassau and labeled ‘Drama in Bahama’.

A year earlier, Ali was stopped by the skillful hands of Larry Holmes, who felt so bad beating his hero into submission, he kept backing off hoping the referee would end the debacle. Finally, in the 10th round of a scheduled 15 rounder, Holmes got his wish.

Clearly finished, Ali still wanted one more chance at resurrection and though competitive for seven rounds against Berbick, his career ran out of gas in the late rounds. Berbick got the 10 round unanimous decision and Ali was officially and thankfully done at 39. Those last couple of rounds are painful to remember, even today, for a once upon giant.

Tiger, also 39, suffered a first hole knockdown on Friday at the Open slipping while looking for his ball in the rough. Unfortunately, after a standing eight count, the competition continued until he was eliminated at 16 over par, finishing 154th out of 156 golfers. The U.S. Open is an event he so covets and once dominated. He has become so rank and file, it borders on laughable to pathetic for this too once upon giant.

Tiger will never win anything of substance again. It’s been apparent for a couple of years but truly in focus the last few months. Age, waning ability and far too many good, younger golfers in the world will see to that.

He probably could still win our club championship in Birmingham but his days as a PGA force have ended. Plus he probably doesn’t have much interest in the reserved parking spot the winner of the Pine Tree Country Club championship is awarded.

It’s sad even for those who take delight in the failure.

Muhammad Ali, Michael Jordan and Tiger Woods were the most dominant athletes of the current era.

Ali and Tiger hung around too long and became mediocre. Jordan started the last year of his NBA career at 39 too, after minor league baseball pitchers threw the speedball right by him. HIs final two forgettable years as a Washington Wizard were career lows for productivity.

Comic great Jack Benny was perpetually 39 years old because as he said “There’s nothing funny about being 40.”

For golf and Tiger Woods fans, there’s nothing funny about 39 either.