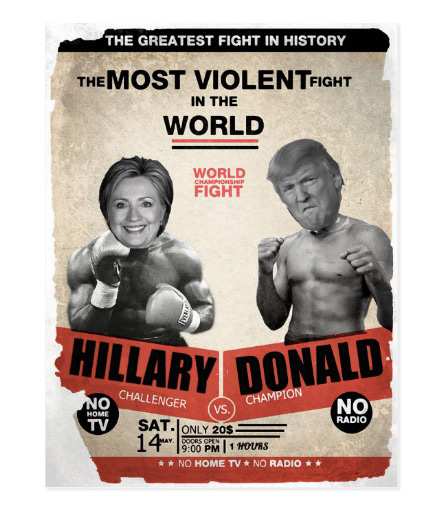 As sport trilogies go, for my generation, it didn’t get any bigger or more dramatic or intense than the three Ali-Frazier fights. These were great fighters who not only disliked each other but we, the public, also took sides, not always for the right reason.

As sport trilogies go, for today’s generation, it probably won’t get any bigger than Trump-Clinton, who enter their third and final contest in just a few hours. From every direction, it looks like it could be a donnybrook.

Trump will throw haymaker after haymaker. Can Hillary bob- and-weave? Can she take a punch. Does she have a glass jaw or will she simply get hit, shake it off and grin, infuriating the king even more? And like prizefight’s from bygone era’s, will it be on the up and up or will it be ‘rigged’ in some eyes?

It’s funny, but as much as I was looking forward to and anticipating the inaugural Trump-Clinton brawl three weeks ago, and even knowing tonight will be a Don King-Vince McMahon spectacle at its finest, and as much as I can’t wait to see it, the first debate on September 26 gave me a sense of anxiety that I hadn’t felt in a very long while.

In fact, it wasn’t until a day or two after the debate ended that I realized that ‘long while’ had been 45 years. Yep, forty-five. The last time I so eagerly awaited a scrap like Trump-Clinton was March 8, 1971 when the country collided with the first Muhammad Ali-Joe Frazier showdown.

It’s one of those night’s I still remember so vividly, seeming like it was maybe only forty-four years ago.

It was boxing’s first try at a closed-circuit broadcast. It was a concept nobody knew anything about. Prior, if we wanted to see a fight we just turned on our TV sets on Friday night for the ‘Gillette Fight of the Week’ with Don Dunphy calling the blows. Closed-circuit meant we had to pay to watch in a movie theater, arena or coliseum. I was a freshman at The U and went the ten miles or so over to the sun and fun capital of the world, Miami Beach, to the Auditorium with three of my dorm degenerates and paid $5 to watch the fight on a theater screen. If you wanted to sit close it cost $8, which meant one less quiniela ticket and a beer at jai-alai the next night. We couldn’t justify that.

Smokin’ Joe Frazier was menacing and the undisputed champion of the world, having won all twenty-six of his previous fights. Ali, stripped of his title four years earlier for his political beliefs, had finally been reinstated and now after two comeback fights was unbeaten in thirty-one contests.

The intensity in Madison Square Garden was as thick as a Mississippi state trooper’s drawl and the smoke in the arena looking like burning oil left on the kitchen stove. Three weeks ago the anticipation at Long Island’s Hofstra University, twenty miles from The Garden, was tempered some by the setting and the warning they couldn’t hoot and holler like we did in 1971.

Ali represented the young, left-wing, anti-Vietnam sect. Frazier was the pro-war, conservative right. Ali said that Frazier was “too ugly and too dumb” to be the champ. He proclaimed the only ones rooting for Frazier were “white people in suits, Alabama sherrifs and the Ku Klux Klan.” Millions were Ali fans; slim were the genuine Frazier backers but a strong, vocal, white male crowd who were anti-Ali, and still called him Cassius Clay, were strong Frazier fans because he wasn’t Ali. My dad was anti-Clay; I was pro-Ali. I was nineteen, my dad forty-two. The country was divided that night, as we still are a half century later.

After ring announcer Johnny Addie called the fighters, Ali started fast as did Trump in the first debate. He dominated the first three or four rounds until Frazier found his footing. The two didn’t like each other, that was no secret, nor is the animosity between Wednesday’s candidates.

Early, the Ali followers went bonkers. “We told you our guy was still the greatest.” The Frazier and anti-Clay crowd was quiet. Fifteen rounds is a long time in the fight game. Ninety minutes is a long time on the debate stage. Ali’s rust started to show. Trump’s debate immaturity did as well. Finally in the fifteenth and last round, Frazier with a sweeping and powerful left-hook put Ali down for the first time in his career. Referee Arthur Merchant gave his his first ever eight-count. You really could tug on Superman’s cape. Nobody cried ‘rigged.’ Ali didn’t say getting hit “makes me smart.” It was a legit punch and knockdown.

Hillary took some early pummeling at Hofstra but hung-in, absorbed the blows and then scored a knockdown with an overhand right on income tax and a left cross named Alicia Machado. When the judges scorecards were totaled, both Frazier and Clinton stood tall with their hands raised.

The second Ali-Frazier fight was three years, not two weeks later. Both fighter’s were shells of what they once were. Frazier had lost his title to George Foreman and Ali had been knocked out by Ken Norton a couple of years earlier, before reversing the loss in a rematch.

Everyone expected Ali to come out swinging in the rematch. Everyone expected Trump to do the same in the town hall format second debate ten days ago. But Ali, back at Madison Square Garden, took a hold and hit approach; if Smokin’ Joe went low, Ali went high and nullified Frazier’s strength. Ali’s stylistic approach led to a close but unanimous decision, though the Frazier camp thought they won.

In Clinton-Trump II, the town hall setting at Washington University made the body chemistry between the two awkward and there was more stalkin’ than brawlin’. Even though Trump claims he beat her “badly”, I think most unbiased judges would have given the decision to a smooth jabbing Hillary.

The final of the three Ali-Frazier beatdowns was in Manilla in 1975 and rightly forecast as “The Thrilla’ in Manilla”. Before they got to the Philippines, Ali became World Champion once again, literally shocking the world and stopping the previous unstoppable George Foreman, only nine months after the second Frazier fight.

It was a steamy Manilla night, Ali’s title was on the line and a vicious battle ensued. Ali called it “as close to death” as one can come without dying. Frazier’s trainer, Eddie Futch, wouldn’t let his fighter come out for the fifteenth and final round. The beating took it’s toll on both fighters, mentally and physically, for the rest of their lives. They never fully recovered from October 1, 1975.

So does Trump-Clinton monitor the Ali-Frazier trilogy? Does Donald come out swinging Wednesday night, hoping to make contact? Or does he slow it down, hold and hit and try to win on style and points. Does HIllary try to avoid getting hit and continue to ride her two debate wins or does she keep jabbing to get under his skin. Maybe she’s even sitting on a knockout punch.

Unfortunately, no matter who wins or loses tonight, the toll has been taken on the the American public and our status in the world. It’s hard to believe we are producing this on our home court. But it will soon be over and when it is don’t cry for Trump when he loses on November 8. He won’t shed a tear. In fact, he’ll ultimately sigh in relief, right after blaming the dishonest media and a ‘rigged’ process, but he’ll make more money from losing than he ever could from winning. As my high school classmate Ken White so accurately points out, Trump leaves with a data base of about forty million loyal supporters, believing the message, and a media craftsman, Roger Ailes by his side. Trump will become a mega-media mogul like this country has never seen before pocketing big amounts of cash. Oops, I mean huge amounts. Smart? Nah. How about pure business genius.

But first, tonight, we go to where we should be, the fight capital of the world– Las Vegas. The debate won’t be at Caesar’s Palace or the old Las Vegas Hilton as fights were in the good-old-days, but it will be close by. The Thomas & Mack Center on the campus of UNLV will be the host and that building has seen its share of marquee fisticuffs through the years, too.

Like all great heavyweight fights of the 80s and 90s, Vegas is exactly where this trilogy should end.