At high noon this afternoon, when Donald Trump agreed to become the 45th President of the United States, at that very same moment, I became a Founding Member of the MOB.

No, no. Not the mob of Lucky, Bugsy, Nucky and Tony. I’m too late to be a founding member of that branch. My MOB is presently under construction in Washington D.C. No, no, not the aristocratic mob moving into 1600 Pennsylvania either. My MOB in DC is on 3rd Street. It’s better known in curation circles as the Museum of the Bible, or the amusing hypocritical acronym, MOB.

Yes, I am now officially a Museum of the Bible Founding Member. Thank you very much. I’m honored. I’m humbled. I know, I’m a hot shit. What the hell is the Museum of Bible?

I still have a better chance of becoming the marketing director for Ringling Brothers than I would have guessed of both Trump becoming President and me as a benefactor of the MOB. There were no odds for that quiniela on the futures market.

But here we are. Trump is standing and Ringling is not. Like everything else that has happened since November 8th, I’m blaming Mr. Trump for my MOB status. Or maybe Putin. Probably Putin.

Can you think of anything safer a couple of months ago than betting on Hillary to beat Donald? Especially in mid-October when she had an 11 point lead that was about ready to turn into two touchdowns. It was easy cash. It was the Colts beating the Jets in Super Bowl III; it was Mike Tyson beating Buster Douglas; it was Clinton beating Trump. It was take-it-to-the-bank cash. It was larceny.

However, this whole thing went haywire for me a week before Election Day during an early morning breakfast with a bloke named Jordy. I’m not going to tell you his last name for a couple of reasons: any guy that raises funds for the Museum of the Bible shouldn’t be wagering and I don’t know his last name. Bet your ass if I did, I’d blow the ill-gotten gains whistle on him quicker than the President could rattle off the words ‘great, amazing and disaster’.

During that breakfast, Jordy told me Trump would win. I told him he was full of shit and consuming hallucinogenics at that hour of the morning was probably a bad long term idea. He asked me what kind of odds I would give him that Trump wins? Ten to one seemed to be a good number. Hillary had to be 15 or 20-1 when the video of Trump stepping off the bus at ‘Access Hollywood’ hit CNN, so I was getting more than a favorable play. It was stealing cash.

I told him I would lay $1000 to his $100, but the only stipulation was the money had to be donated to the charity of the winner’s choice. I knew it was a quick C-note for the Greater Birmingham Humane Society. I was about to double the bet only because it was easy pickins’ and the Humane Society needs the funds, but my dry rye toast arrived and I got diverted. I’m now thankful for the dry rye toast.

Yada, yada, yada. I called foul because Hillary won the popular vote which I told him was all that mattered. It’s like outgaining the opposition by 300 yards and losing 27-14. He told me to look at the only scoreboard that counts.

So once President Trump said “So help me God,” the wager became official. Ironically a stack of Bibles was the prop to seal both the oath and my loss. 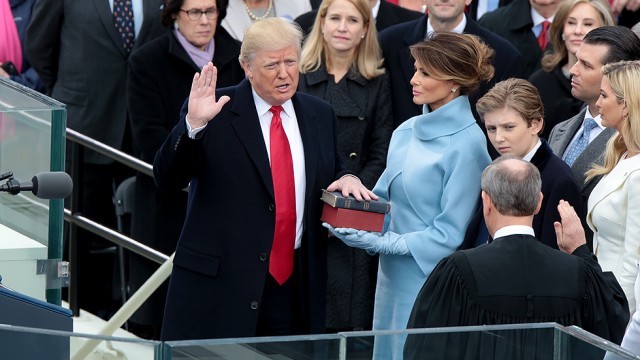 A day after the election, Jordy gloatingly told to make my check to the Museum of the Bible. I never heard of it but that shouldn’t come as a surprise. I’m not a thumper, nor frankly am I a Bible reader. In fact, I’ve never read it. If Cliff Notes doesn’t have a version, it’s not for me. If it doesn’t have pictures, I’m not engaged. If I can read the first two pages and not comprehend anything, I’ll toss it aside for good. And if it’s not written by Jim Murray, Furman Bisher or Mike Lupica, it ain’t going to be read by me. It’s that simple.

So, about a fortnight after the election, late one Friday afternoon at home, Ibis starts barking like crazy. I know it’s either a ten-year old kid wanting to do the unthinkable and pet him on the head or Mr. Charm sees the FedEx truck.

By then I had forgotten about the wager. But it quickly surfaced again when my overnight MOB credentials arrived. I figured it was best not to tell Andi the story as forking over a grand when she’s talking new kitchen chairs couldn’t be viewed as the best use of the domestic treasury. So I put the package down in a place I knew she would never look– right in front of her.

Then I heard a wail. “What the (heck) is the Museum of the Bible?” Except she didn’t say ‘heck.’ She used another word with the same number of letters. It’s not something heard regularly in the hallways of MOB. I gave it my Ralph Kramden humada, humada, humada but came up short of sending her to the moon. So I went for the best defense I could–I blamed it on Hillary– that she couldn’t beat a tomato can like Trump. Let’s put it this way: Hillary didn’t lose Alabama because of Andi, so I thought I could divert my pain and her attention by laying the blame on the failure of her candidate. After all, shifting blame elsewhere is the American thing to do.

So after opening my welcome kit, I told her the truth about the bet. She asked the same question I did– “what the hell is the Museum of the Bible?”

I tossed the DVD, book and member credentials aside and went right for the promotional brochure. I spent more time reading it than I ever have on the good book. What I learned is my museum won’t open until November, 2017 but when it does it will be 430,000 square feet spread over 3rd Street in DC, only few blocks from TrumpTown. It’ll be six floors high with the mission to “engage with the history, narrative and impact of the Bible.” Yawn. Excuse me.

Then I read Andi my benefits as a Founding Member. It was an attitudinal game changer for us both.

For my four figures we’re talking a bi-monthly newsletter; a 10% discount in the gift shop; my name on the Museum Wall of Honor and now the really big stuff: unlimited first-year admission for both of us; no waiting on line for tours and seminars; access to the Members’ Lounge and the biggie– two free ‘Friendship Passes’ where we can bring friends for free anytime we go. Carla-Bob, Brenda-Adam, Jill-Bob, y’all in?

If Hillary had won, none of this good fortune would have been bestowed upon me.