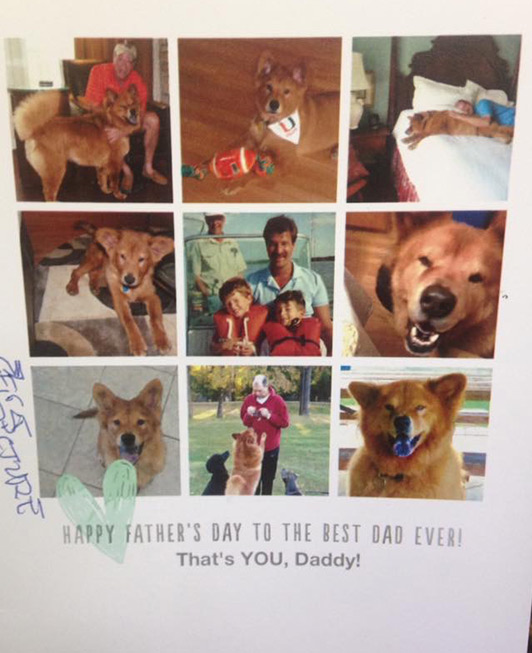 I know it’s one day post-Father’s Day and as much as I enjoyed everyone’s posts yesterday about their dads, I still need to take a moment to brag on my boy.

He’s not your normal companion. He shows dogged determination in getting done what he needs to do. He doesn’t beg for attention; he just wants to make you proud. He may not be the best schooled among all kids, but he did get a degree from obedience school. He came out a different creature than he went in. He shows his appreciation every day with a fist bump, handshake or a wet swipe on the nose. He knows where his beef and liver is buttered.

So on Sunday, a steaming hot southern dog-day afternoon, Ibis was determined to find the perfect card for his best buddy. He forgot it was Father’s Day. When Andi reminded him, he sprinted through his private door like he was chasing what he thinks is the same squirrel he’s been chasing for the past eight years.

Tipping at just under 100 pounds and a surgically repaired ACL, his sprint looks more like William ‘Refridge’ Perry ambling with a fumble than Rickey Henderson stealing second. He can care less- he had to get to Rite-Aid, Walgreen’s and CVS to see if they had the perfect Father’s Day card.

I’m not sure where he found it but he found two. Sometimes communication between us isn’t as smooth as it should be. Many times I’ll ask a question and not get an answer. I’m not sure why he’s like that but I think it’s more personality than personal. Doesn’t matter- he had that look in his beautiful eyes that he stole from his feline friends. He looked like he just swallowed the canary.

Thanks pal. The card was perfect. Just like you.