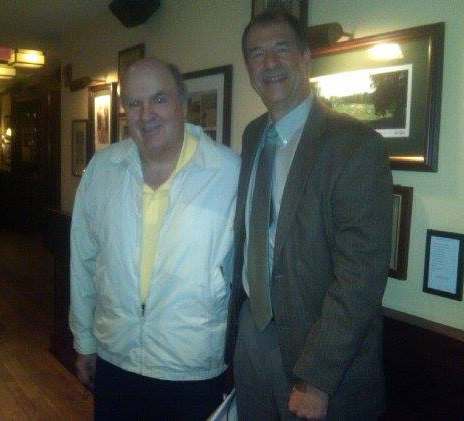 This isn’t about baseball, only it’s a baseball setting. This is about life. This is about friendship. This is about not taking anything or any moment for granted. It’s about the gift we are given to both see and smell how green the centerfield grass really is.

Last Wednesday morning at the age of 62 my best friend from high school, Tormey Santolli – “T” to all, passed away in his sleep from a massive heart attack. According to his wife Linda he wasn’t sick nor had any history of heart trouble. He just didn’t wake up.

Three days later, also at the age of 62, I was scheduled to play in a Pittsburgh Pirates fantasy camp reunion game at the Pirates home, beautiful PNC Park in Pittsburgh. It’s old guy baseball at either its finest or worst, depending on how you want to look at it.

Linda phoned me on Thursday as I was getting ready to leave Birmingham for Pittsburgh and said “don’t even give a second thought to not going, T would insist you play baseball.” T and I were weaved from the same piece of cloth from our later high school years in the 60s right through post college days in the mid-1970s. We then went our different ways for about 35 years and reconnected three years ago. We picked up right where we left off though we both put on a few years, pounds and had much less hair. Like many of my later year relationships, this one I coveted.

Saturday morning I took the field at PNC Park one hour before T was laid to rest. My heart was heavy, my mind very confused and my hat inscribed with a “T” under the bill. The Pirates camp brass asked me to also manage my team of 13 wanna-be’s and never-were’s against a similar team of campers. I played the game with an incredible appreciation of the moment- where I was and what I was lucky enough to be doing.

It doesn’t matter but we won 2-1. I lead off the top of the last inning with a seeing-eye single, my first hit in a big league ballpark and made it to second with two outs. With our best hitter at the plate, 35 year old David Miller, who earlier hit a one-hop blast off the right field scoreboard, I knew I had to defy the laws of gravity, physics, age and speed despite the refrigerator strapped to my back and score on a base hit. MIller lunged for a 3-2 pitch and poked one into right field. I looked for a cab but couldn’t find one. So I got on my horse and began the giddy-up. I huffed, I puffed, I labored. I could have used an energy drink from the third base coach but he just kept waving me around. Nobody would ever confuse me with California Chrome. Ultimately I made it home safely with what proved to be the winning run. What a schlep. We held them in the bottom of the inning for a 2-1 win which now puts me only 2325 career managerial wins behind Joe Torre. I don’t think I’ll catch him.

As our game ended, T’s funeral began. We would have chatted about my Pittsburgh experience a few days later. As per usual he would have asked multiple questions about our game: ‘Did you stay with pitchers too long’?- No, but we did use four. ‘Did you get to double switch?’- Yes, had to in the last inning. ‘Did you get to use a replay challenge?’- No but I should have as we had a bad call against us in the first inning. I can almost hear the conversation.

T was a huge sports fan but baseball was always top of the list and still very much a bond for us. A retired banker, he had a memorabilia collection that dated back to the late 1950s and filled a room of his Long Island home. We last spoke on May 5, the day before my birthday, as I thanked him for some very cool old time Pirates stuff he sent me. His personal collection was highlighted by his baseball card stash. Linda took two baseball cards and placed them into T’s pocket before his casket was closed. One was a Mickey Mantle. The other a Roy Berger. I lose it every time I think about it.

Saturday was only a baseball game but it was really much more. It was about a lifetime bond. Rest peacefully old pal, I already miss you. I promise I’ll do my best to keep running the bases for both of us just as long as I can.