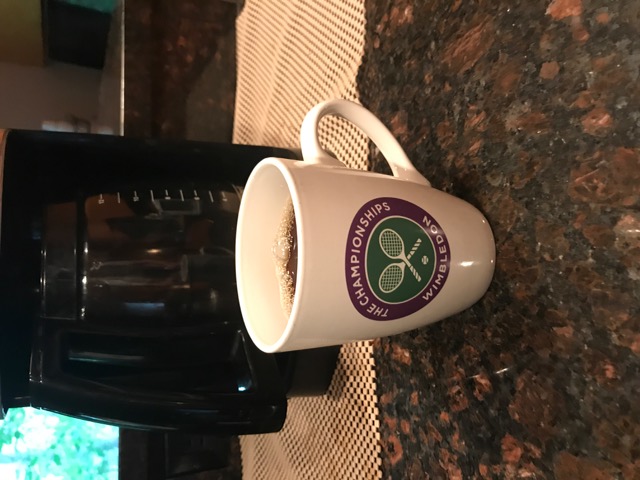 It’s Sunday morning, the coffee’s hot in the very trendy-for-the-fortnight Wimbledon mug, and after a four week blog hiatus some stuff is rattlin’ around in my head:

How many times a day do you think Joe Biden kicks himself?

Do you think Kellyanne really believes her own spiel? How about Spicey?

Yeah, I’m a throwback. Just ask my kids. We still get four newspapers a day on the driveway by 4 am. Andi scoops ’em all up by 4:15. They’re real newspapers, making us one of the very few left in the neighborhood. However, I just disconnected my car phone last week.

The Wall Street Journal has become my favorite in print, but my best source for daily news and sports is Twitter.

And speaking of Twitter, every time I see the ‘modern day’ Presidential means of communicating, the immortal 1998 words of Jack Buck play: “I can’t believe what I just saw.”

Watching Joey Chestnut win Nathan’s once again makes me ask, “Is a hot dog a sandwich? What about a hamburger?”

Are crows the only birds that fly in a straight line?

It may not be for another dozen, sixteen or perhaps twenty years, but I’d make Ivanka Trump odds-on to hit the political deli-double: our first female and Jewish President.

If you live in New Jersey please suggest to your Governor a pair of Dockers for his next beach trip.

Should you really ask permission to recline your airline seat or does the little round button give you license?

I wish the G20 Summit had a selection show. I’d love to know who Joe Lunardi had as the first four countries out.

If I was asked to pick the final sports cathedral I could attend again before the clock ran out, I’d be torn between Wimbledon and Augusta National.

It was indeed heartwarming to see both parties put aside their differences, as they said they would, in honor of Rep. Scalise. That lasted twenty minutes.

The President says he wants to ‘fix’ the many bad trade deals the United States has made. Can he do the same for the Knicks?

The NHL playoffs prove every year that hockey players are the best and toughest all-round athletes.

The sports fixer-uppers can forget about a plan to shorten baseball games. The speed, or lack of it, is a big part of the romance. The game is never going to seven innings, a pitch-clock won’t work and revenue won’t allow commercial time between half innings to be reduced. It’s three hours, period. Same as an NFL game.

Did you know there are 18 minutes of actual play ‘action’ in a baseball game; 11 minutes of the same in football?

However, if you really want to take something to the sports repair shop how about the last ninety seconds of basketball games? Both NBA and NCAA. Ninety seconds, with back-to-back-to-back timeouts and video review of everything means at least twenty minutes, most times longer. A rules tweak may keep me awake.

I was over in London last month for the 19th straight June. My Lloyds of London hosts invited me to a breakfast in a local pub to watch the UK side on the telly play an international rugby match in New Zealand. It was 8:30 in the morning on a Tuesday. I asked if they drink at that hour? Was told they may have a ‘loosener’ or two before heading to the office. The pub breakfast for our group of eleven arrived: fried eggs on white bread, topped by bacon and sausage and Guinness (x2) for all the blokes. I prayed my rabbi wasn’t in London. 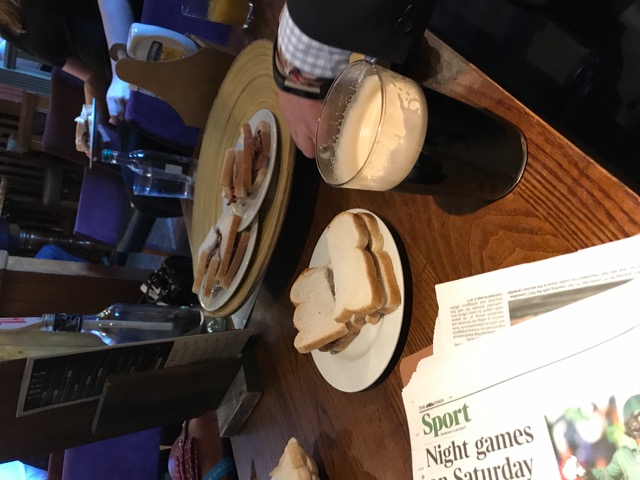 This delicacy is a perfect Denny’s late night treat. Call it the All-Scrum Breakfast. A buck ninety-nine is the price and it’s an an outright winner at 3 am. Just make sure a bathroom is near-by.

And speaking of a scrum, can you imagine the advance money publishers will pay to Reince Priebus?

Trust me on this – you’ll never complain again about TSA procedures after seeing none in Amtrak or mass transit stations. This scares me.

Shame on Major League Baseball umpire Angel Hernandez who claims Joe Torre, now in the Commissioner’s office, is holding a personal vendetta against him for 17 years and he’s not getting plum assignments. And shame on everyone else who, without cause, seeks to play the legal system and make a dime on harassment and discrimination claims because of their own failings and shortcomings.

Hats off to Ibis. Dogs handle pain so much better than we do.

By the way, Angel Hernandez was chosen as an ump in Tuesday night’s All-Star game.

Politics aside, I wish I was as smooth as CNN’s Chris Cuomo.

I’m fifty years late to the party on many things…last week I finally read ‘To Kill a Mockingbird.’ I didn’t love the story as much as I wish I had a quarter of the writing talent that the late fellow Alabamian Harper Lee had. 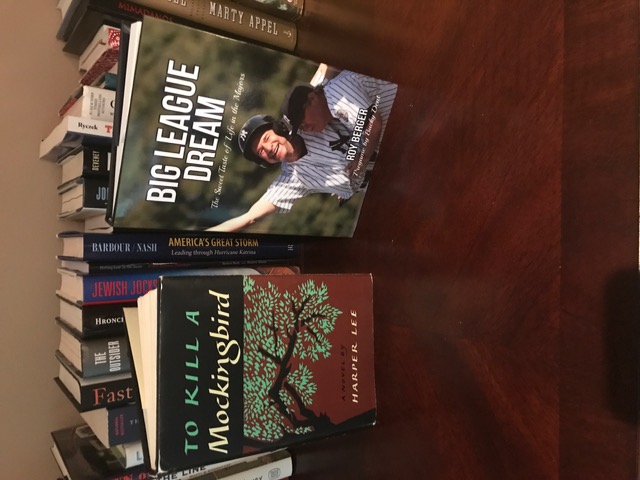 The only thing my ‘Big League Dream’ and ‘To Kill A Mockingbird’ have in common is they were both conceived in Alabama. One written by a native; the other by a carpetbagger.

A carpetbagger is defined as an ‘unscrupulous opportunist.’ Thank you.

Of course you want to buy it now. I understand. We never can get enough 5-stars. Amazon or bigleaguedream.com is the answer.

Do the Dems have anyone throwing in the 2020 ‘pen?

Nevada legalized recreational pot on July 1. It puts a whole new spin on making a decision when you have 16 and the dealer shows an 8.

Expect a 30 second clock on Vegas blackjack tables before the end of the month.

Did you notice we mellow as we get older but everyone else becomes more stubborn?

Time for a loosener. Have a great week.~