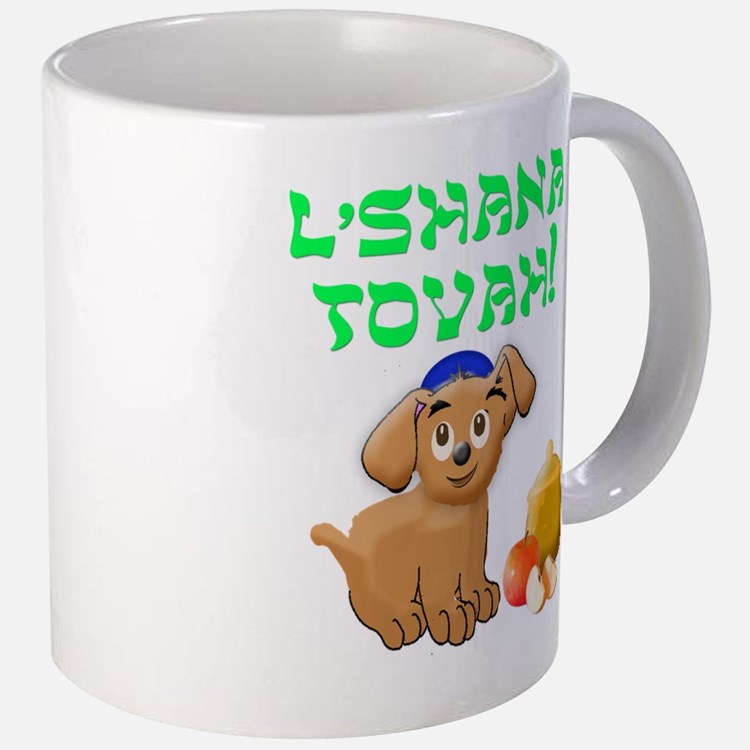 In Judaism these are the Days of Awe– Yamin Noraim. It’s the period between Rosh Hashana and Yom Kippur, the holiest days of our calendar, the year 5778, a time for introspection to consider our sins and transgressions of the past year and ask God for forgiveness. And to seek blessing in the new year. It’s also the time to be thankful for what God has given us.

In my case the holiday takes on special significance now that I am five weeks post cinco de bypass. I will be in synagogue next weekend for Yom Kippur to express my gratitude and also praying for my dad, who is hospitalized this morning in South Florida for kidney and heart issues of his own. Yes, I guess the apple doesn’t fall very far from the tree. But today, as I have my Sunday Morning Coffee, there are many other things to take my mind away from health issues for a few minutes and be thankful for.

I’m thankful to live in Alabama. If you like clean college football and dirty politics, then you’re in the right place.

The Tide is unbeaten while the national Republican Party is focused on the state. Vanderbilt, in a 59-0 squeaker, became another Bama football victim yesterday while there’s a pretty ugly intramural political tiff going on down here that is shaping up to be a doozy both on and off the field.

Alabama is also a state where one of it’s better higher institutions of learning, Birmingham-Southern College, took the very unusual turn and cut their tuition in half for next academic year. Now $18K will buy you what $36K used to. Good for them.

Alabama politics, unlike Birmingham-Southern or the Crimson Tide, doesn’t have the same reputation for excellence. Not by a long shot. We have enough former governors, mayors, legislators and lobbyists in jail right now to field a pretty darn good prison softball team with a fairly deep bench.

And the eyes of the politicos will be on us Tuesday when Luther Strange and Roy Moore duke it out in a run-off for the Republican nomination for U.S. Senate. It’s the seat vacated in January by Jeff Sessions who clearly was under the influence of something when he said ‘yes, I’ll be your AG’ to Mr. Trump.

Trump then told us Sessions would be a “great Attorney General, believe me.”

Strange at 6’9″ is not called ‘Big Luther’ by accident– he’s the tallest U.S. Senator in history and a former Tulane basketball scrub. ‘Big Luther’ has been his campaign moniker since he first ran for office ten years ago. Mr. Trump, though, has a different recollection telling a raucous Huntsville, AL gathering on Friday night that the first time he met Strange, a few months ago, he was so taken aback by his size “that I called him Big Luther and now EVERYBODY does.” Okay, Mr. President. Whatever you say.

By the way, that Huntsville rally was originally scheduled for last night, Saturday, but when the Trump team was told they would lose if they tried to compete for attention with Alabama and Auburn football and run the risk of an empty arena, they switched to Friday. Good or bad, they got the attention they sought.

Big Luther is the incumbent in the runoff, only because former Alabama governor Robert Bentley appointed him to the seat in February right before Bentley, disgraced on multiple conduct counts, resigned. Bentley, while anointing Strange who was serving as the Alabama AG, declared that there would be no general election for the seat until November, 2018. Big loved the idea.

As former Govenor Bentley tossed his nameplate into the brown moving box, there was some speculation that he appointed Strange to the Senate as part of a deal cut with Strange’s office that the AG would not prosecute the now former governor. It’s only speculation but could there have been a back-room Alabama political deal? Nah. However, the first thing grandmotherly Lieutenant Governor Kay Ivey did when inheriting the throne was to use her best Lee Corso and tell Senator Strange “not so fast my friend”; there’s going to be an election for this seat after all.

Roy Moore was elected Chief Justice of the Alabama Supreme Court in 2001 and removed two years later for his refusal to take down a monument of the Ten Commandments in his courthouse. He was re-elected Chief Justice in 2013 but was suspended last year as he continued to recommend enforcement of the state’s public same-sex marriage ban even after it had been overturned.

Moore, who has a narrowing five point lead in the polls, clearly is another of the state’s great candidates.

This race has split a couple of Saturday Night Live characters as well. Trump, in another unconventional move, came to Alabama and endorsed underdog Strange. His buddy Steve Bannon has come out in strong favor of Moore. The Grim Reaper doesn’t necessarily think Moore is a great candidate, nor does he have particular issues with Strange, but Senate Majority Leader Mitch McConnell endorsing Luther Strange was enough to push Bannon over to supporting Moore, contrary to the President. You can’t make some of this up– Bannon really doesn’t care who the candidate is as long as foe McConnell doesn’t get his guy. Wonderful.

You would think there’s too much political risk for Trump to take sides in this. Whoever wins the primary will face a formidable Democratic foe in former U.S. Attorney Doug Jones, but Alabama is a state that is redder than its favorite team’s football helmets and it’s extremely uphill and almost impossible for any Dem to win national office. 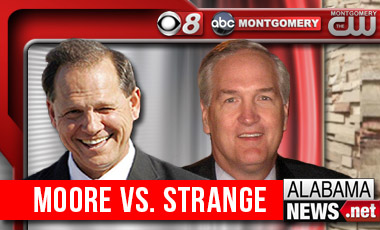 This Alabama political skirmish has the attention of the DC bigwigs.

The forecasted low 12% voter turnout for Tuesday works against Big Luther as low numbers will boost Moore, who is a bible-thumping evangelical with a strong and loyal following.

You can also bet your covefefe that if Moore wins and then goes on and prevails in the December general election, I fully expect the President to exclaim that Roy Moore will not only be a “great senator” but “he was my choice all along.”

And before we get off the subject of Trump, please sir enough with the Rocket Man. It got a smile the first or maybe second time we heard it but now it’s getting dangerous. Your constant bullying is now on the verge of provoking a lunatic. Enough already, you made your point.

By the way, that pounding you keep hearing in the background is Jeff Sessions’ head hitting the West Wing walls.

Let’s also be thankful for some things other than entertaining and head-shaking politics:

As a Jets fan, I’m thankful for the Cleveland Browns. And maybe the New York Giants too.

I’m thankful I got to watch the late Frank Vincent, the Soprano’s Phil Leonardo, act.

Appreciative I am to a Amazon book reviewer by the name of R. Collins, who as I was surfing the site last week called a book “brilliantly written and a fun read!” It seemed like something I’d like so I took a peak at its website and bought it. You should too. The book is named ‘Big League Dream’ and the website is bigleaguedream.com. No, Mr. Collins is not a relative.

I’m thankful I found a way to save a little money courtesy of Netflix’s new series called ‘Ozark.’ No longer do I have to buy TylenolPM or Ambien to fall asleep.

And finally, and fittingly for the Jewish holiday, I’m thankful to Rabbi Ken Emert. Rabbi Emert was our first Rabbi when Andi, Jason, Scott and I came together as a family in 1991 in Wichita, Kansas. 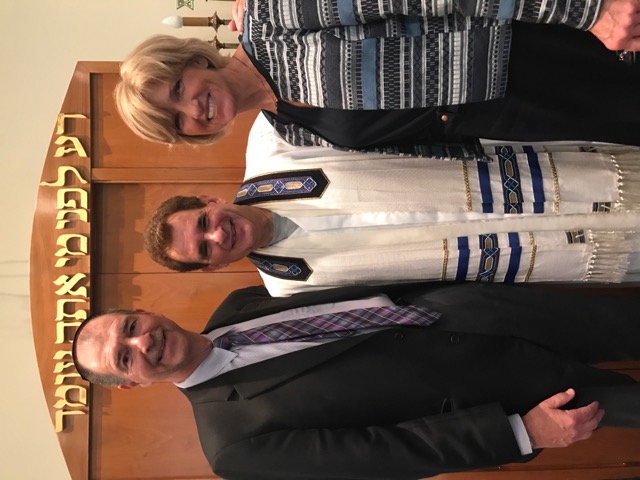 Reunited with Rabbi Emert. By the way, if you don’t read Hebrew, I’m pretty sure the inscription above the ark translates to bigleaguedream.com.

He introduced Andi to the religion while bringing me back. He was our Rabbi when Jason became a bar mitzvah in a still memorable 1994 ceremony. Just as Scott was ready to begin bar mitzvah training, Rabbi bolted for a pulpit in Wyckoff, New Jersey where he remained for 22 years before he retired this summer. To this day he denies avoiding Scott training was the impetus for the move. I will always believe otherwise.~

As fate would have it, Rabbi Emert was engaged to be the guest rabbi for high holiday services in a small synagogue in Auburn, Alabama. Congregation Beth Shalom has forty member families and is a stand-alone building a couple of miles from the Auburn University campus. It was built in 1961 smack in a charming residential area. From the outside it looks like an old school house. The worship hall has about eighty seats placed in a small setting that you might see for a village summer-stock production. Beth Shalom doesn’t have a full-time rabbi, instead weekly Friday night services are led by members of the congregation. For the high holidays they bring in a guest rabbi, sometimes a young upstart right out of rabbinical school, but more times than not one that has recently retired, like Rabbi Emert. 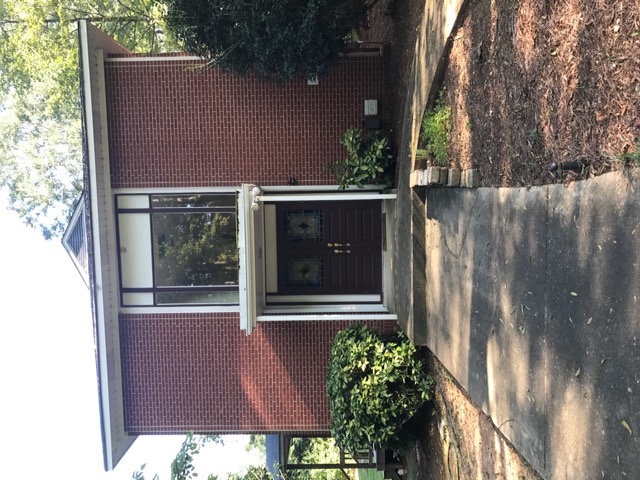 Once Rabbi told us he would be in Auburn, the decision for Andi and me to drive the hundred miles due East was no decision at all. He means so much to our family that we wouldn’t have missed the opportunity to worship and visit with him again.

For Rosh Hashana service, perhaps sixty of the eighty seats were filled. There was no secondary market for tickets. The most prominent in attendance, other than me, was former ESPN commentator and now Auburn head basketball coach Bruce Pearl, who arguably is the second best hoops coach in the state.

Rabbi Emert is not only a smart man with a doctorate but he also carries a Medjet membership card. “We’re going to Auburn, Alabama for Rosh Hashana!” is not something you normally hear a Jew chant. However, the experience was a wonderful deja vu for us. It was like we just spent last weekend, not 22 years ago, listening to his prose. And the two hours we spent visiting with Rabbi Emert at the hotel following the Wednesday night worship was pure joy.

So to everyone, members of the tribe or not, our wish to you is L’Shana Tova- a sweet, happy and good year. I am more thankful for this new year than any I can remember.