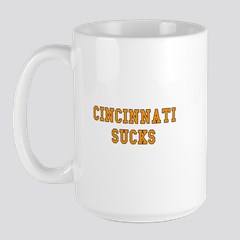 Come on Cincinnati, what did I ever do to you? I’ve only been in your fair city once and thought I conducted myself as a gentleman. I ate your renowned chili; it was nothing a half dozen Pepcid couldn’t ease. I watched WKRP. I rocked to Dr. Johnny Fever. I rooted for Pete Rose during his hitting streak. I felt bad you had that Nazi-loving looney Marge Schott as your MLB franchise owner. And I could have taken a poke or two when Jerry Springer was your mayor, but I resisted. And now you treat me like this? First your baseball team, Ms. Schott’s former team, knocked me on my keister. A weak pitching staff and a projected weaker bullpen was supposed to take its toll on your Reds, so betting ‘under’ 81.5 wins for this season was free money. Instead, the Reds are in the heat of playoff contention and need to win only five of their remaining 13 games to get their 82nd win. The only way that won’t happen is if I bet on them to do it. But, realistically let’s hang that in my loss column. Cincy, I stayed in your town for one of my two large football season ‘over/under’ bets as the Bengals under 6.5 wins was more free money. In spite of quarterback Joe Burrow, the Bengals were supposed to have an offensive line as sturdy as a piece of lavash and a defense with more holes than a Biden troop withdrawal plan. Additionally, the Bengals this season have the fourth toughest schedule in the NFL and a brutally difficult division with the Steelers, Ravens and Browns. I saw three, maybe four wins on the slate. Until last Sunday, when the Bengals tried their best to give away the season opener to Minnesota, but the Vikings wouldn’t cooperate. In the waning minutes of overtime, the Vikings were driving for the game winning score, or at the very least a tie, which would have worked for me. Then the Vikes fumbled. Then Burrow showed his LSU Heisman winning form. Cincy wins with a field goal with no time left on the clock. My narrow ‘under’ window just got slimmer and the beatable Bears are up this weekend. Cincinnati, I am really getting to dislike you.

My other large football play has me drinking the local Kool-Aid and staying home with the Raiders over 7.5 wins. The Raiders will put points on the board; if their reconfigured defense can hold the opposition to under 40 points a game, there are wins to be had. That played true on Monday night with a very improbable 33-27 overtime win against the Ravens. The overtime football gods took one away with the Bengals and give it back with the Raiders.

The good news for those who like to wager a peso or two on football and read last week’s Sunday Morning Coffee (https://royberger.com/sunday-morning-coffee-september-12-2021-beating-the-book/) was former Las Vegas sportsbook CEO Joe Asher gave us an early season gift. Asher tipped: “My number one favorite betting angle has always been the home underdog in an NFL prime time Sunday or Monday night game. If there’s coast to coast travel involved for the favored visiting team, double down on the home team.” Baltimore came here Monday nightas a four-point favorite over the Raiders. They left Vegas as most do, a loser. Even I got in on that one. Thanks Joe.

One game on today’s schedule fits Asher’s criteria, though it’s a slimmed down play because the Eagles and 49ers are not in prime time. San Francisco is a three point favorite traveling to the home ‘dog Eagles.  Also the Ravens are a prime time home dog against the Chiefs 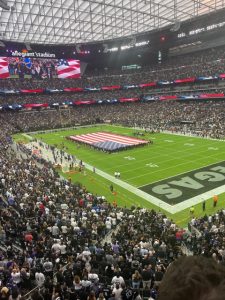 Monday’s historic all-vaccinated crowd of over 61,000 for the Raiders and Ravens went off without a hitch.

Andi and I were two of the 61,000-plus at Allegiant Stadium on Monday night for the Raiders and Ravens. The Raiders made vaccinations mandatory to attend. No doubt it was the largest indoor gathering of all vaccinated peeps in this country and probably the world. Anticipated chaos to get in never developed. Those who prepared in advance were encouraged to download their vax cards to their phone via a Clear Health Pass app. A green background on the app whizzed you past the inspectors and into the stadium. If you didn’t have the Clear app you had to show your vax card and ID at a separate station to get authorized clearance to enter. The third group was a combination of those that just recently got shots and those that hadn’t but wanted to see the game. The Raiders said over 6,000 fans got vaccinations in the days just ahead of the game while 300 were poked on game day in vaccination tents set up on the Allegiant Stadium grounds. Those in the third grouping were given a blue arm bracelet to enter. That was the only group that had to wear masks during the game. It was a plan that worked. Shamefully, the only ones inside Allegiant who weren’t vax’d were a handful of the players who clearly don’t get it. The process was as orderly as can be expected for the first time. We live about ten miles from the dome. From the time we left our driveway, parked in our designated lot, went through our Covid screening, then through stadium security it took a total of only 45 minutes. Too many of you wisenheimers wanted to know if we stayed till the end of the game. Let’s just say it was close enough. When Baltimore kicked the fourth quarter field goal with :37 seconds left to take a 27-24 lead and the Raiders had no timeouts left, it was over. We were joined by thousands of others and flew to the exit quicker than Ravens quarterback Lamar Jackson running from a vaccination line. I understand not much happened after that.

Saturday was another tough day for the big football three in the state of Florida.  The Gators, with a gutsy effort, came up short against Alabama.  Florida State, fresh off a loss at home to perennial pancake Jacksonville State, continued their losing ways at Wake Forest while Miami, as counterfeit as they’ve ever been, was a seven-point favorite at home against Michigan State and only lost by three touchdowns. Combined they are 3-6 with FSU winless.

Bama football is known for their running backs and wide receivers but the last three ‘Bama quarterbacks- Jalen, Tua and Mac, all started for NFL teams last Sunday.

Another year of the Jewish high holy days just passed as we welcomed the new year, 5782. I always find Rosh Hashanah and Yom Kippur retrospective and spiritually invigorating and this year had special meaning to our congregation as we physically returned to synagogue after a pandemic absence in 5781. I also realized that the Pacific time zone and Yom Kippur are not necessarily good partners. While the rest of the country was breaking fast, we were still hours away, hallucinating about our kugel, bagels, and chicken salad.

How does a butt-dial know what number to call?

Not sure if there are any circumstances that I can rationalize Sirhan Sirhan seeing the light of day as a free man.

Don’t tell me fans in the stands don’t make a difference in sports. Last year, with NFL stadiums Covid empty, road teams went 128-127-1, the first time ever in league history the visitors played over .500 ball.

Clearly, it’s good to be a single guy in college in this country. At the end of the 2020-21 academic year, women comprised 59.5% of those enrolled.

In a youth movement, the New York Islanders announced over the weekend they have signed free agent defenseman Zdeno Chara to a one-year contract. Chara is 44. Bobby Orr wasn’t available.

OF the 2.1 million American service men and women, including National Guard and Reserve, almost 800,000 are not vaccinated. Secretary of State Lloyd Austin has since mandated vaccinations.

What 18-year-old Emma Raducanu and Leylah Fernandez, one year her senior, did during the U.S. Tennis Open fortnight almost defies belief. Bravo to both of them. Let’s hope this is the beginning of a lengthy career for the ladies and not the all too common flash-in-the-pan burnout. On the men’s side Djokovic ran out of steam when it mattered most. His Finals loss to Medvedev quashed the very rare tennis calendar Grand Slam. No male has won all four Majors in the same year since Rod Laver in ‘69, but if anyone can get as close as Djokovic just did it’s Joker himself. With Nadal and Fed ailing and aging, and the younger kids just coming into their own, Djokovic should have relative clear sailing for the next couple of years.

Interesting observations from Stanford head football coach David Shaw and former college and NFL top guy Steve Spurrier about the disparity between the NFL draft and college recruiting processes. Shaw told Sports Illustrated: “If you win a championship in the NFL you are picking last in the draft. If you win the championship in college football, you’re in essence getting the first picks among the top ranked kids. There’s nothing that helps the programs in the middle get to the top.” Spurrier said, “It’s almost unfair. At Alabama it’s like being in the NFL, winning the Super Bowl and then getting the first 10 picks in the first round.” Wah, wah. Roll Tide.

Credit to Ole Miss football coach Lane Kiffin who, despite living in a state with one of the lowest vax rates in the country, had his team and staff 100% vaccinated before their opener against Louisville. That’s good coaching. Not so good was Kiffin missing the game after contracting Covid.

You’ve probably been wondering what’s the only year in U.S. pop music history that British groups had more number one singles than Americans? In 1965 songs by The Beatles, the Stones, Petula Clark, Wayne Fontana and the Mindbenders, Herman’s Hermits and The Dave Clark Five were atop the charts for 27 weeks. Now you know.

And finally, if you want the definition of inflation, here it is: today it costs the US Treasury’s Bureau of Engraving and Printing 7.42 cents to produce a nickel.