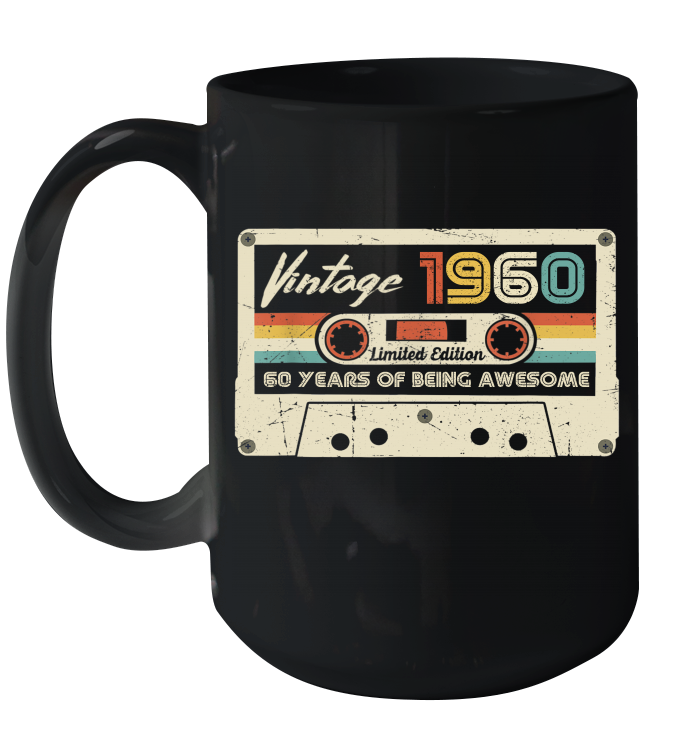 I got to thinking about this last week. On Tuesday, there was a note in the “On This Day in History” column of our morning newspaper. One of the items listed was an event on October 13, 1960, exactly sixty years ago to the day, which happens to be a day I still remember vividly. That prompted me to think how much had happened before that date I can still wrap my memory around.

I was born in 1952. I’d like to think I remember when my brother Mike was born in 1955, or when we moved from upper Manhattan to Long Island the next year, but I really don’t. What I do remember is seeing old photos and 16 mm home movies, when they didn’t get caught in the projector sprocket, and think I actually recall the events. I remembered that I don’t really remember any of it at all.

In ‘57 I started kindergarten, with some recall. I was designated a Bluebird for class identification purposes and had to wear that color bird attached to a shirt button. Mrs. Nelson was my teacher. I remember the playground and the classroom. Same goes for 1958 in the first grade. Miss Reich was my teacher and for the first time in my young life I was in love. But it was doomed to fail. I was six, she was ancient, probably 23 or 24. She also couldn’t be seen running around with a kid who still toted a Zorro lunchbox.

Nothing special sticks out about 1959 but the next year, 1960, was when the memory tank activated in earnest and still spills remnants today. Sixty years is an extremely long time ago. Since then I’ve been married twice, the second one a keeper, had two kids, two dogs, a granddog and owned seven houses. I completed a forty-five-year career; did eight bad stand-up comedy gigs; had a hole-in-one and legged out a late-in-life triple. Yes, things have been good.

And while Mrs. Nelson and the hot Miss Reich are still memory blips, it was the year 1960 that produced three events that still resonate like it was only yesterday. 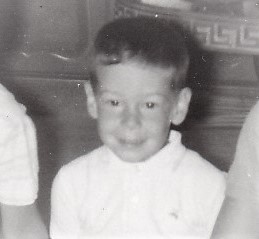 My brother Kenny was born on February 1, 1960. I was seven. I’m not sure I remember much about Mom’s pregnancy, but I remember when Dad told me we had another brother. I was upset. I already had one whom I wasn’t too crazy about. I wanted a sister. I walked out to the side of the house and cried. Kenny never knew that. Keep it between us, please.

November 6, 1960, was a Sunday and my parents’ eleventh wedding anniversary. Not sure what Mom and Dad did to celebrate but I know Dad and I threw on our winter coats that morning and drove to Hempstead Turnpike, a major thoroughfare on Long Island, and parked in front of a car wash. We were there to see presidential candidate John F. Kennedy, two days before Election Day. He was facing Richard M. Nixon for the seat ultimately being held warm for Mr. Trump. New York was crucial in the vote count which was why JFK was still on the stump with two days to go. Kennedy went on to win New York, which helped him to a huge electoral victory, despite just squeezing by in the popular vote. 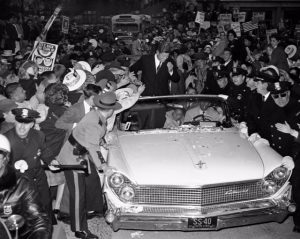 JFK campaigning on Long Island two days before the 1960 election.

I also remember that morning was cold. Someone yelled, “Here he comes!” and Dad picked me up and put me on the hood of our car so I could see. There was JFK, riding in an open-air limo, waving. Dad waved back and then yelled something I thought at the time was very strange, “We’re for you Mr. President,” he shouted. I was confused. Eisenhower was the president, not Kennedy. I’ll never forget that.

But it was October 13, 1960, three weeks before JFK’s Long Island visit, that was the happiest day of my young life. No, we didn’t have a sister born that day. Do the math. No, Miss Reich didn’t come over for dinner. It was even better than that. The Pittsburgh Pirates beat the New York Yankees in the seventh game of the World Series that afternoon, an event that in a very strange way, fifty years later, would change my life.

Kids growing up in the 50s and 60s were baseball fans. That truly was the national game. I was no exception other than being a bit of an odd duck — I was a Pittsburgh Pirates fan living in New York. There weren’t many of us. I was a Pirates fan because my dad was one and I thought that’s the way it’s supposed to be. My dad never stepped foot onto Pittsburgh soil in his life, but he loved the Waner brothers, Paul and Lloyd, who played for the Pirates so he became their biggest fan east of the Hudson. Me too.

I don’t remember much about the 1960 World Series, other than what I’ve since seen and read. But I do remember the end of Game 7 better than I remember yesterday, which is barely at all. Know the feeling? I was now eight and in the third grade. I took a transistor radio to school that day. Somehow, I developed a 24-hour prostate infection and went to the bathroom a lot. My radio did too. Once school ended and we got on the yellow bus the Pirates were ahead 9-7 in the top of the ninth and only three outs away from being champions. While we were on our way home, the Yankees got two to tie the game. Finally, my stop. I ran off and bolted through the door of our house, not sure if I even acknowledged my mother who was in the kitchen. I ran down to the den and turned on the black and white Admiral TV. Damn thing had to warm up first. That gave me a minute to find my plastic Pirates replica batting helmet and pop it on for luck. Ralph Terry of the Yankees was pitching to second baseman Bill Mazeroski. Ball one, up high. I was as excited as an eight-year-old kid, because I was an eight-year-old kid. 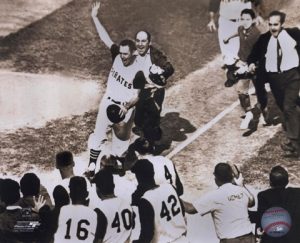 Who knew a half-century later the Pirates win in 1960 would have such an impact on my life?

Mazeroski hit the second pitch 406 feet over Yogi Berra’s head and over the left field wall. There was bedlam inside Pittsburgh’s Forbes Field. I watched Maz run through the mobs of fans that were on the field and into World Series history. I did the same thing. I ran outside with my Pirates helmet and started circling my street waving the helmet like Maz just did.

I couldn’t wait for Dad to come home. He worked in NYC and always caught the 3:30 pm Long Island Railroad train, walking through our front door every afternoon promptly at 4:30. However, not this day. My heart was pounding. I couldn’t wait for him to get home. The clock said five o’clock, the sun was disappearing and still no Dad. “Ma, where is he?” I yelled into the kitchen from the living room where I was staring out the bay window looking for Dad. Mom was making dinner and keeping an eye on Mike and Kenny, the two little rats. Finally, at 5:30, the headlights of his black 1956 Hudson Hornet headed for our driveway. Before he had a chance to get out of the car, I jumped on him. We hugged. He knocked the helmet off my head.  He told me he stayed in the city to watch the end of the game. Didn’t matter anymore, our Pirates were World Champions and so were we!

That was sixty years ago last Tuesday just like “This Day in History” reminded me. Fifty years later, in 2010, I went to Pittsburgh Pirates Fantasy Camp in Florida for the very first time, encouraged by my wife, because it was something I always wanted to do, and the Pirates were honoring the 50th anniversary of the 1960 team. That was all the excuse I needed to do something that was on my proverbial adult bucket list. Seven members of the ‘60 team were among the twelve coaches in camp including Bill Mazeroski. I had no idea if I could even hit a baseball but that didn’t matter. Playing was secondary to seeing and being with my heroes from half a century earlier.

You pretty much know the rest of the story. Because of October 13, 1960, I’ve been to fourteen camps, written two books about my experiences and had the incredible honor of Mr. Mazeroski penning the foreword of my first one, The Most Wonderful Week of The Year, in 2014.

Because of October 13, 1960, I’ve made friends: both fellow campers and ex-ballplayers alike, who will be with me for the rest of my life. The memory from that 1960 afternoon has been parlayed over and over again into more relationships than I ever could have imagined. But if Mazeroski didn’t hit that first and still only World Series game seven walk-off home run and the Pirates lost the game, none of these experiences would have ever happened.

Indirectly, because of October 13, 1960, and my 2010 introduction to fantasy camp, it gave me another lifetime accomplishment. One I never saw coming. One that odds-makers said was a virtual physical impossibility. I became one of the very few, okay maybe the only, sixty-three-year-old to hit a triple in a real baseball game. Okay, almost a real baseball game. It was 2016 at Pirates camp and I smacked a forty mile per hour fastball to right center field. It rolled all the way back to the fence, 335 feet away. I got on my horse, which was really nothing more than a broken-down mule. The center fielder chasing the ball fell down and even though I’m slow, really slow, the right fielder, who was still upright and now running after the ball, was even slower than me. I got to third standing up. Sliding was never an option. I was beyond winded. Former Pirates second baseman Chico Lind was the third base coach and told me he was about to wave me home for an inside-the-park home run. I told him I wouldn’t have gone. I was staying right there. I was beyond content hitting a triple at my age. In fact, at any age.

I stood on third base, wheezing, coughing and trying to catch my breath. I blamed it on 1960 and my damn memory. I finally got myself composed. I remember thinking if only Miss Reich could see me now.