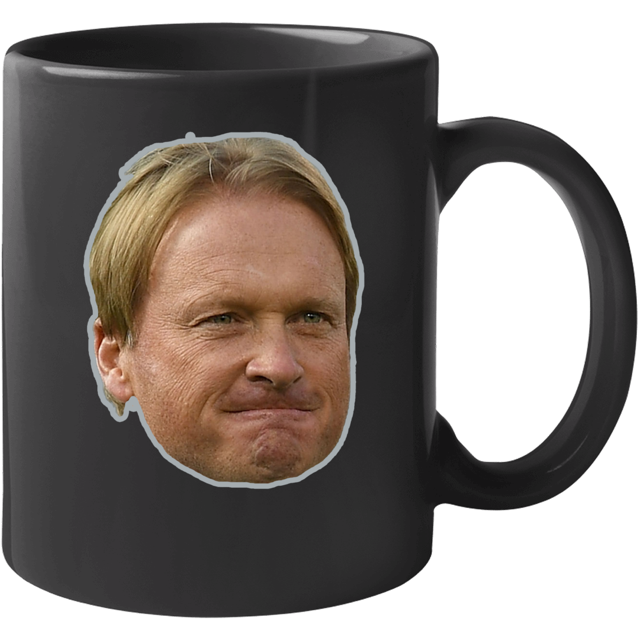 Jon Gruden had everything in the world going for him. And then he didn’t.

Jon Gruden had stature, celebrity and fame. And then he didn’t.

In one gigantic turnover, after too much typing on a keyboard, everything that Gruden accomplished in his professional career is gone. The penalty flag was thrown. Gruden targeted himself.

Last Sunday after the news broke a day earlier that the Las Vegas Raiders head coach penned an email to a colleague with racial overtones, we wrote in Sunday Morning Coffee “ … there will be consequences yet to fall. It’ll be interesting to see how both the NFL and Raiders owner Mark Davis react. Even more interesting will be to see if Gruden can keep his team and locker room intact.  Over 75% of the Raiders are Black. This is a long way from being over.”

Actually, it wasn’t a long way at all. Two days later, after the Raiders were unfocused and sloppy losing to Chicago, Gruden was out of a job. His departure had nothing to do with the loss. His lack of good sense and judgment did. Maybe, with sensitivity training, he could have overcome his original faux pas of calling NFL players union boss, DeMaurice Smith, ‘Michellin (sic) lips’, but I didn’t think so. I figured he was eventually terminal but would at least finish this NFL season. Then came the death sentence. On Monday, the New York Times released another set of prose written by Gruden that attacked gays, women, the NFL, its commissioner, former President Obama and his then Vice President who now has a White House gig. There weren’t many he left out. Topless pics of NFL cheerleaders, too. Juvenile stuff. Death row was immediately prepped.

Raiders owner Mark Davis either fired his good friend last Monday night or Gruden came off life support and resigned. It doesn’t matter which way it happened, it just had to happen.

Las Vegas is emerging as a genuine American city. It’s not just a playground anymore for gypsies, tramps, thieves, conventioneers and overweight tank toppers chugging oversized drinks on the Strip.

Professional sports is playing a key role in the city’s transformation. Vegas now has three pro teams; five years ago, there were none. The Golden Knights of the NHL are the chosen child because they were born here. The Aces of the WNBA another piece of the pro puzzle having relocated from San Antonio and since been purchased by Mr. Davis. The Raiders arrived last season, fresh off a move from Oakland. An NFL franchise brings any city instant credibility.

Davis plucked Gruden from broadcasting back onto the field. He brought not only an established coaching resume, which includes a 2002 Tampa Bay Super Bowl victory, but instant respect. He locked Gruden in for 10 years at $10 million a year, enough to buy unlimited buffet tokens at Treasure Island. Gruden was the perfect fit for the Vegas community— he’s a young 58. In the off season he is seen all over town be it at a Knights game, a concert, dining at chic joints or in any of the after-hours spots. He was adored. He had it all. And then he didn’t.

Of the three professional head coaches in town, Gruden by far was the most prominent and charismatic. The Golden Knights’ Peter DeBoer is a good hockey coach but off the ice, colorless as a glass of gin. The Aces head man Bill Laimbeer is negative and a bully, just like he was as one of the ‘bad boys’ when he played for the Detroit Pistons. That left Gruden as the coaching all-star. He played the part so very well, mingling with fans, always available for a picture and making sure Raider Nation knew he was one of them.

We moved to Vegas three years ago. The Raiders have been here for two. Before we got here, my wife didn’t know Jon Gruden from Josh Groban or Charles Grodin. But Andi became a Raiders’ fan and as a by-product, a Gruden fan. He was the face of the franchise.

But all that changed in a hurry for her and no doubt countless thousands of others. On Monday evening, when the full platter of Gruden’s emails were released by the New York Times, Andi became angry. Very angry. “He owes this entire city an apology,” she barked. “We embraced him, believed in him and he just turns out to be another one of those kind.”

Sadly, Gruden didn’t do anything a million other people are probably doing right now. Sending emails that are racist, homophobic, misogynistic and hurtful. Throw stupidity on that list for Gruden, too. 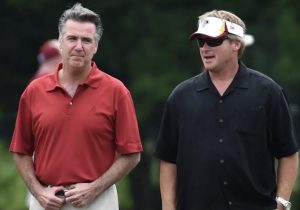 He wrote them to Bruce Allen who, during this 2011 time frame, was the president of the Washington Redskins. Allegedly, the pen pal exchange between the two buddies continued for seven years and was discovered by the NFL during its investigation of the Washington franchise for sexual misconduct, harassment and workplace culture issues over a ten year period. Gruden’s emails were a small part, but the most visible, of the 650,000 that were seized and examined. To date, for whatever reason, the league has only released the Gruden-Allen chain. Whether that selective release is meant to harm the Raiders and Gruden or just the beginning of a huge league-wide fallout, we don’t know yet. What we do know is Gruden can’t run and hide from his indiscretions. Even ten years ago people had to know that anything sent to a corporate email address was probably never going away.

Gruden’s writing buddy, Allen, has a long family history in football and politics. Bruce’s dad was Hall of Fame coach George Allen, and his brother is a former Virginia governor (1994-98) and US Senator (2001-07) also named George. Bruce served as general manager of the Tampa Bay Buccaneers when Gruden was its head coach and then executive VP, general manager and president of the Redskins from 2010-2019, during the time of the alleged team harassment and discrimination activities. He was fired following the 2019 season.

Allen, now out of football, doesn’t have nearly as much to lose as Gruden. In fact, considering he’ll never work again in football, nothing to lose.  A colleague who knew Bruce and the Allen family told me, “In my opinion he (Allen) was sleazy and corrupt. He presided over and worked with some loathsome people. His father (who died in 1990) would’ve deeply disapproved of some of his son’s work.”

Nonetheless, Gruden is now gone. He was actually a better personality than football coach. Since returning to coach the Raiders in 2018 he was 22-31. His career mark is 117-112. However, he was a better football coach than an email writer. No doubt he’s probably out of football and broadcasting for the rest of his days. He just bought a $4 million dollar home in the ritzy Vegas community of Southern Highlands and now, if he chooses to stay here, will go underground and become ostracized. Deservingly so. He will join fellow Las Vegan O.J. Simpson. Once upon a time they were both riding high on the hog, only later to become the hog. Lipstick will only stay on a pig for so long. Funny, but O.J. found the need to tweet on Monday that “Gruden has to go.” Thanks for the input, Juice.

Jon Gruden, we bought into you. You let us down. You owe not only this city, not only the Raiders, not only the NFL, but also a very fractured and sensitive nation, an apology. Don’t just read lines off a piece of paper. Instead make it something from the heart showing you’re not all hat and no cattle.

And then for everyone’s sake, go away.