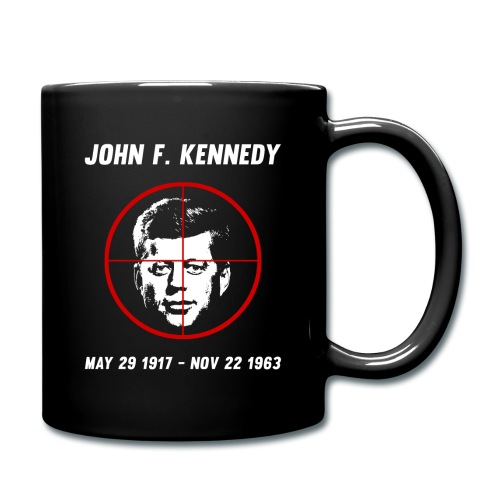 It probably started out like any other Friday in the sixth grade at Meadowbrook Elementary School. No doubt the same scene played out in every school across the country.

East Meadow, the Long Island community that housed Meadowbrook, was white bread suburbia. At any given PTA meeting you could find Ward and June Clever and Ozzie and Harriet Nelson clones gathered around the punch bowl.

Recall is a very strange thing. Especially when trauma and emotion are involved. I’m guessing this particular Friday, November 22, 1963, started like any other routine fall day. The Los Angeles Dodgers had won the World Series five weeks earlier sweeping the Yankees. That was okay; I was still a Pirates fan. Neither the Knicks nor the Rangers, cellar dwellers, lost the night before because neither had played. The Rangers were 5-11; the Knicks 6-12. Not much has changed in half a century.  Thanksgiving, my favorite holiday, was less than a week away; the air was getting crisp and the New York fall colors were on display. Life was good and so was that morning going to school.

Just another day until about 1:45 in the afternoon. Then everything changed. Forever.  It’s as vivid today as a Memorex moment, decades before Memorex. The school principal, Albert Tyler, got on the public address system. He never did that. That’s the same Mr. Tyler who would walk into the lunchroom and instantaneously everyone stopped eating and talking. I never could figure that out. Still can’t. I bet it happened in your school, too. Mr. Tyler looked like a school principal — tall, stiff and wearing a pair of glasses that looked like he meant business. He was probably in his fifties but to us kids he might as well have been a hundred.

About thirty minutes later Mr. Tyler came back on the PA. “President Kennedy is dead.” We didn’t know much more. The President was in Dallas, Texas, and killed. We still had an hour of school remaining. I’m not sure why but I was asked by Mrs. Miller to run an errand to the school office. I was scared beyond scared. I can still see it and feel it today. My seat, in alphabetical order, was second in the first row right behind Spencer Ackerman. The school hallway was long, or so it seemed to a kid, with glass entry and exit doors at either end. I had no idea how far Dallas was from New York, but I remember thinking as I walked as fast as I could, almost in a jog, that by now the killer could be close by.

Our after-school bowling league was canceled. So were all other post-school activities. Our family of five gathered at home, around the kitchen table, watching Walter Cronkite on the Admiral TV with the rabbit ears on the easy-to-wheel TV stand. We were high tech. Mom didn’t cook that night, instead we had Chicken Delight. She took their jingle, ‘Don’t cook tonight, call Chicken Delight,’ literally. Dad tried to help us make sense of what we were watching. Neither he nor Mr. Cronkite really could.

Fifty-seven years ago today. A memory that has lasted a lifetime but sadly will undoubtedly be reduced to a footnote in today’s Sunday newspapers.

I have no recollection of a nation in mourning the day after, Saturday, November 23. I’m sure I devoured every newspaper I could get my hands on. I still have my copy of the New York Daily News that Dad bought for me. Cost a nickel. It’s now yellow and parched, much like me.

The next day, Sunday, I was at our neighbor’s house to watch the Giants-St. Louis Cardinals football game. All college football on Saturday was canceled. The nation was weeping. Sunday’s American Football League games were scrapped, too. The NFL games went on despite the players not wanting to play. Commissioner Pete Rozelle made the decision to take the field after consulting with JFK’s good friend and press secretary, Pierre Salinger, who said the President would have wanted it that way. Later Rozelle admitted it was the worst decision of his career. 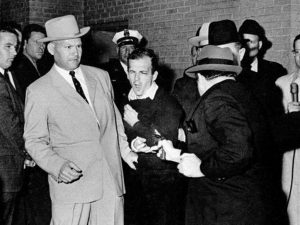 About a half hour before the traditional 1 pm eastern kick-off, all the networks were live in Dallas awaiting the transfer of Lee Harvey Oswald, arrested as the suspected assassin of the President. He was to be moved from Dallas police headquarters to a local jail. As Oswald was being escorted up a garage ramp, the television audience was stunned when a man jumped in front of Oswald and shot him in the stomach. It was reality television at its earliest and most sensational. A murder played out for all to see. Chaos and confusion. On camera, people yelling and running. Oswald went down as police officers apprehended the shooter, later identified as Jack Ruby, a two-bit mob wannabe, who ran a local strip club. Ruby was known to all the local authorities and had no problem getting inside police security, which wasn’t too secure at all. We all watched. But I don’t think I fully comprehended the enormity of what I saw. The networks stayed with the coverage and none of the ill-advised NFL games were broadcast.

I ran home. I’ll never forget my dad’s first reaction. Jack Ruby was Jewish, born Jacob Rubenstein. Dad was worried that Jews might be held accountable for the murder. Fortunately, that didn’t happen. Oswald was the country’s number one villain. He also killed a Dallas police officer after he shot the President on this day in 1963. Ruby almost achieved hero status for his action. In fact, the crowd assembled outside the Dallas police headquarters burst into applause when they heard Oswald was shot. The secret of the Kennedy assassination was forever sealed that day. Did Oswald act alone? Was he acting on behalf of others? Did the Soviets, the Cubans or the mob commission him and then hire Ruby to silence Oswald? Or were the Patriots responsible? Even back then, we Jets fans blamed the Patriots for everything that went wrong. Or did Ruby just act alone, like an American vigilante? Ruby, 52, had a reputation as being a bit of a psycho. Did he feel he owed it to President Kennedy to avenge his death? Like either a good mob soldier or just a kook, Ruby’s secret died with him four years later in jail from cancer. 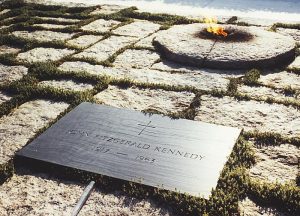 Monday, November 25, 1963, was an official day of mourning in the United States. Schools and businesses were closed. President Kennedy was buried that afternoon. The D.C. day was wintry cold. One million people lined the funeral route. The bagpipers. Jackie Kennedy, joined by JFK’s brothers Bobby and Ted, walked behind the President’s body riding on the caisson. So did newly sworn-in President Lyndon Johnson over Secret Service objections. The riderless horse. JFK Jr.’s salute. Arlington National Cemetery. The eternal flame at the gravesite, which had this eleven-year-old mesmerized, still burns brightly today. A united country. Chilling.

For my generation that was the end of the societal innocence that we never realized we were blessed with. Two more high-profile assassinations before the decade of the 60s ended — Martin Luther King Jr. and Bobby Kennedy. Vietnam, inner city riots, peaceful and not-so-peaceful protests, campus shootings, Watergate, the Challenger explosion, terrorist bombings, 9/11, school murders and now COVID. The list is far from complete but the world, our generational world, was never the same after November 22, 1963. 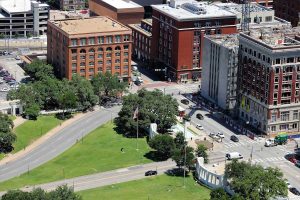 I never stopped being both haunted and captivated with the recollection of that day. The setting in Dallas of the Texas School Book Depository, where Oswald worked and shot out of an upper floor corner window; Dealey Plaza, where the School Book Depository was located; Kennedy’s limousine route through the plaza; the grassy knoll, where conspiracy theorists say there was a second shooter; the mall area where people were eating lunch, gathered to see the President — all of that was so large and prominent in my mind’s eye. Five years ago, while on business in Dallas, I finally made it to Dealey Plaza in the West End district of the city. I was excited to be going there. It was something I always wanted to see, feel and touch for myself. I anticipated everything I had seen, read and absorbed for over half a century. Turning the corner on Market Street, I was taken aback by how compact everything was. It looked like a movie set on the Warner Brothers lot. I took the tour and then spent a lot of time walking the area recounting how things played out. November 22, 1963 came back to life.

Hawkers were all over the Plaza. I had a twenty-something selling old newspaper headline replicas and tacky souvenirs approach and ask me, “Do you have any questions about the Kennedy Assassination?”