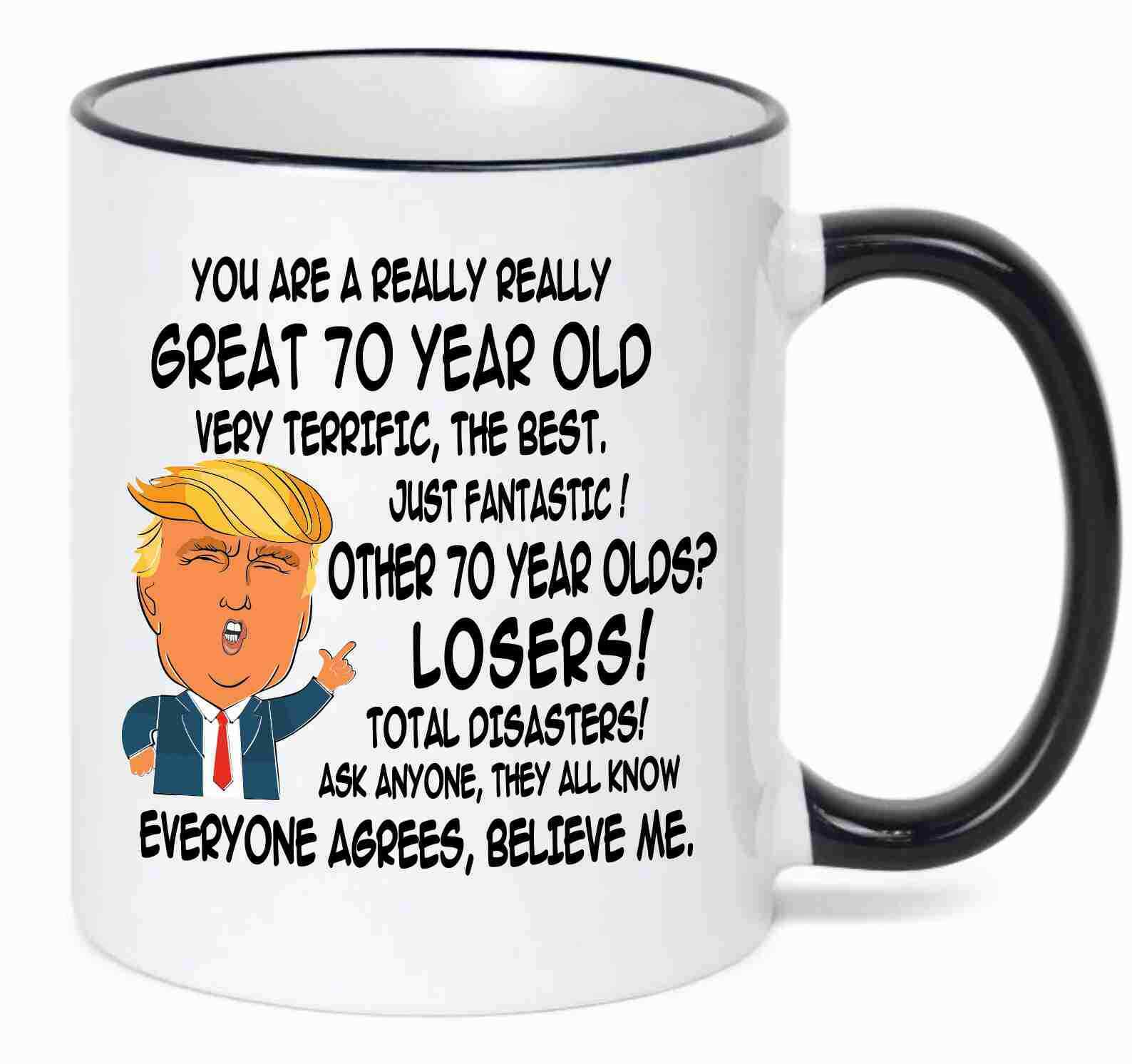 Damn, that happened fast. It got here quickly. Too quickly.

It was September 1957, the day after Labor Day, a summer-turning-fall-day on Long Island, then a burgeoning suburb for New York City working, middle class families. President Eisenhower was in the second year of his second term and the Dodgers and Giants still played baseball in New York. Donald Trump was 11; Joe Biden, 14. JFK was the junior senator from Massachusetts and VP Richard Nixon wasn’t pounded around as a political piñata. Not yet anyway.

My dad left for work early that morning, then a belt salesman in midtown Manhattan which didn’t pay the $160 a month mortgage for a $16,000 house at 1.79%. So, he sold shoes at night not far from home. He may have fitted you at Shoe King Sam. Meanwhile, Mom pinned the Bluebird to a button on my cool sport jacket, dress shirt and bow tie underneath. I still remember that first day. It signified my status on my first day of kindergarten at Meadowbrook Elementary School. There were also Redbirds and Yellowbirds. I got lucky with Blue because Mrs. Nelson was my kindergarten professor. I was happy. 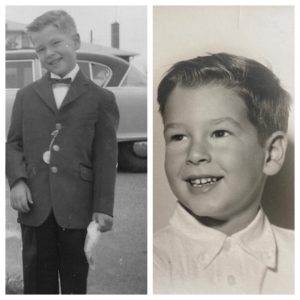 Off to the first day of kindergarten with my Bluebird nesting under my cool jacket.

As kids, 70 year-olds didn’t exist. Not in our minds. Our grandparents seemed old, to us anyway, and they were in their mid-50’s, just like we were fifteen years ago. Whoa! The oldest person I ever saw was on television. His name was Casey Stengel, and he managed the 1962 New York Mets. He was 71 but looked like he was 100. He was all hunched over like you should be in your seventies. Never mind, scratch that thought.

This year my 1970 high school graduating class turns 70. Not so long ago we were thrilled to be almost 17, when driving permits turned into driver’s licenses. Where did the days go?

I have no doubts that our generation, the Boomers, were the chosen ones. We were innocent until 1963 when JFK was assassinated. Then, two days later on a Sunday afternoon, we watched Lee Harvey Oswald shot to death on live television. Less than three months later on a Sunday night we saw the Beatles hit our shores via Ed Sullivan. Finally, color television in our living rooms; adjust the red to Superman’s cape, please. Then RFK and MLK. We went from The Dave Clark Five to Buffalo Springfield; from Herman’s Hermits to Janis Joplin. Then, hippies, protests and a little get together called Woodstock. Forbidden drugs resulted in free sex. Today it’s all screwed up. The pot is now legal but nobody has enough energy for sex, free or not. We were born at the end of the Korean War. We were too young to really appreciate the Cuban Missile Crisis but fully understood Vietnam. We lived through the South trying to resist integration, not fully comprehending it up North. Then four dead in Ohio. The most important lottery we ever played was conducted by the Selective Service in the late 60s, early 70s. The biggest threat from Russia was Khrushchev banging dirt off his shoe at the UN in 1960. We had not lived through a world war the way the two generations before us. Not yet anyway.

We were also good boys and girls and got our vaccinations for measles, mumps, chicken pox and polio when we were told without our parents standing on political ceremony.

And now, all of a sudden we are in our 70’s, with kids in their 40’s. The world has changed in ways we never thought imaginable. Most of it, especially the innovations, are very good. We changed American history and American culture. Today’s lack of rules, respect and boundaries are not so good.

We played the hand dealt us. We left high school and college not sure what was in the cards, but most of us didn’t give it that much thought. I knew I wanted to be a journalist. If I had known my career instead was going to be in business, the only change of course I might have made was to pursue law school. Not to become a lawyer but to have a solid legal business background.

And now, though it may be late in the game for us and maybe even into extra innings, looking ahead is much more fun than feeling sorry for the things that have passed us by.

I’m thankful to still have close friends from the early 60s from my neighborhood, from junior high, high school and from summer camp. Memories of those days grow fonder and we’re never at a loss for words. We can go thirty, forty years without seeing each other and still have plenty to talk about. I’m still in somewhat regular touch with my junior high school girlfriend from 1965. You know, the one lucky enough to get one of the coveted two seats on the dais at my bar-mitzvah which, ironically, was 57 years ago to the day, today. At 70, I’m blessed with more friends than a guy at any age deserves. My relationship with my two younger brothers has only gotten stronger through the years. Through the good times and through all the challenges. Things to relish, not become after thoughts.

I was lucky that Mom and Dad both lived well into my 60s. We lost Mom in 2014 and Dad in 2018. I now see a lot of them in my day to day life, using expressions from Mom and physical traits of Dad. By the way, Happy Mother’s Day, Mom!

I’m determined not to get bored. Still too much to do. My retirement resume will not become parchment. Not yet anyway. We loved Africa, particularly Botswana, and it had such an impact on us six years ago we are going back in August. I hope to finally get to Israel next June. My foray with playing baseball at major league fantasy camps, beginning in 2010, has gone from a one-off to a lifestyle. Though we only play once a year the experience is year-round because of the people I have met. They are now lifelong friends. We gab, we golf, we go to ballgames and on the diamond we try to beat each other. I hope to have one more baseball camp left in me, to play ball at 70 in December. However, my eye injury and the resultant compromised vision and balance may have other ideas. If I could get an at-bat five months after a cinco de-bypass in 2017, I’m not going to let a lacerated eye lid and four resulting surgeries (and one more probable) stop me from swinging at a 40 mph fantasy camp fastball.

Sunday Morning Coffee keeps me creative, and I like that. I’ve written two books, which in the grand scheme of things becomes an obituary line rather than bank deposits. That’s okay, I really did it for me and anything sold was a bonus. Someone once said everyone has one book in them but only a moron writes two. I actually have a third, but Andi won’t let me do it. I want to write a satire on being a Vegas Uber driver for a year. I’m not done lobbying the boss.

And if a Las Vegas life with golf, early morning gym visits five days a week, hikes in the Red Rock Canyon with Ibis and Deuce every Sunday, shows and dinner on the Strip, and ballgames don’t keep me busy enough, I am about to indulge in what is arguably the craziest thing I’ve ever done: last Sunday I was selected as president-elect of Temple Sinai. It’s not something at this point in my life I sought; instead, I was asked multiple times to consider doing it. Andi said, “Don’t consider it, do it. You have an obligation.” That was the end of any discussion; though at that moment, I should have bartered the Uber driver book. The temple engagement will be a two-year retirement lifestyle game changer. Our synagogue, not dissimilar to every other one in the country, is 700 Jews and 1400 opinions. Being a synagogue president is not only lunacy at my age, but lunacy at any age. If all fails at least it’s another obituary filler and SMC piece. Good luck to me. 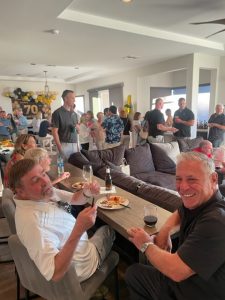 A fun get together Friday night at our house.

I found out a couple of months ago that Andi was planning a surprise party for this birthday. I put an end to that real quick. The bottom line is if anyone is going to throw a surprise party for me, it’s me. So I did. On Friday night we had an open house with about 60 people passing through. It was 30 more than attended yesterday’s Pittsburgh-New Jersey USFL game. We were graced by  neighbors, golf, temple and gym rat friends all of whom we met in the three and a half years we’ve lived here. It was wonderful. Plus my brothers, Mike and Kenny, came in. My sons too. Special. Andi put together all the details. And boy, was I surprised.

So, approaching the 18th tee box of life, I’m not ready to be finished. I assume the rest of my generation isn’t either. We still have a lot to do, a lot to accomplish and a lot yet ahead to leave as our legacy.

Roy Firestone, my UMiami friend and media personality, attended his 50th high school reunion last weekend and aptly wrote: “The only thing worse than getting old is not having the chance to get old.”

Can I be a Bluebird again?