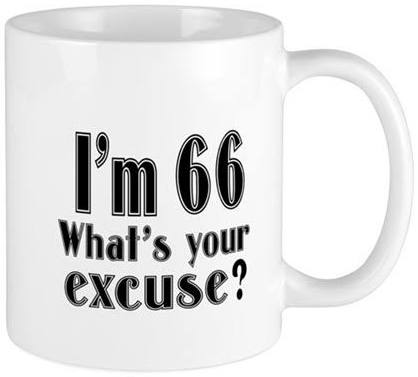 What in the name of Mikhail Baryshnikov is going on?

Today is my birthday. Somehow I just became 66.

The Social Security Administration told me by letter yesterday, in a very rare exhibit of bureaucratic efficiency, that effective today I qualify for ‘full’ retirement benefits. But if I wait four more years, the ‘full’ benefit gets even ‘fuller’ as they will increase the stake by about eight percent a year until, or if, I hit 70. Then, out of options, I must direct deposit.

Statistically, I have about 19 years left. Vegas has my over/under at 17.5 years. I’ll bet the ‘under’ because I never win so it’s important I keep my losing streak intact. A loss is the ultimate win. Sadly, I think the over/under on the Jets going to the Super Bowl is longer than 17.5. Which means if, and when, it’s very possible my Jets fan son Scott will have an extra ticket to the game.

If I wait until 70 to wade into the Social Security pool, then I have to live until 82 to get back the money I didn’t take starting today and be in the black. With a life expectancy of 87, I’m not sure it makes sense to wait too long. Or I can decide anytime between now and 2022 to begin. Right now I’m going to make believe I am a member of Congress and do nothing. Down the line we’ll take a timeout — a full one, not a thirty— and decide.

In the interim, first I have to figure out what the hell has happened to me. Stuff that used to matter doesn’t anymore, not the least of which is who won or lost a ballgame the day before. Things I used to get worked up about I can now rationalize as no big deal. Last weekend, with a massive attic clean-out to prepare our house to go on the market this summer, it was easy to toss junk saved for thirty, forty and fifty years that didn’t have the same emotional tug it used to. Now, with a limited life window left, I look ahead a lot more than I look back.

And it all came full circle this past Monday night. The brash 26-year-old Roy Berger from 1978, or the maturing 46-year-old from 1998 or even the quasi-likable one from a decade ago are gone. Forever.

Those Roy Berger’s would have been semi-orgasmic given the same opportunity the aging one had this past week.

Eight o’clock at night becomes a struggle to stay awake. And I’m on central time. When you get up at 4:10 each morning, thankful that your health has improved and once again can make the gym a part of your daily routine, you go. You remember how miserable you were during the cinco de bypass recovery last summer and how you longed for the early morning activity and punishment at Lifetime Fitness.

On Monday night past, at twenty hours on the dial, the younger Roy Berger would have been conflicted and confused. It was a sports grand buffet. The Yankees were playing Houston on YES; the Pirates were at the Nationals on AT&T Sportsnet; Tampa Bay and Boston were in a tense NHL playoff game on NBCSN and a couple of the old guard, the days when I was young and energetic, the Celtics and Sixers were on TNT.

However, just as I picked up the DirecTV remote, something triggered a thought from thirteen hours earlier. At about seven that morning witth eyes wide open and a mind still pumped with post-workout endorphins, whatever the hell they are, I had my protein shake, Atkins peanut butter granola bar and daily Wall Street Journal, which features my favorite humor columnist Jason Gay. If Jason writes it, I read it. If Jason recommends it, I do it. Except for zip-lining.

His Monday feature was about the all-athlete cast of ‘Dancing With The Stars,’ debuting that night in a limited four episode season. I never watched ‘Dancing With The Stars.’ Never a minute of it. Never cared about it either. Every now and again I’d hear my late mother-in-law in a telephone rant with Andi about this judge or that judge or some contestant. I didn’t pay it much mind; it was just idle background noise over whatever game I was watching.

But Gay’s recommendation stuck with me all day. Not that there’s anything wrong with that. At eight o’clock central, after we finished the penultimate episode of ‘Goliath’ on Amazon Prime, and with all the ballgames starting to get tight, I flipped it over to ABC just for kicks.

There was something about Kareem, Tonya Harding and Johnny Damon starring on the same bill that I just couldn’t sort in my mind. For the first time when I saw it, the letters DWTS actually made sense. I previously thought it was a discount shoe outlet. And just a minute or two into the show little did I know that my wife was a DWTS expert, too. I knew she was good at DSW because it’s on our Visa bill every month but right along with her expertise on heart bypass and rotator cuff surgeries, it appears she’s also a DWTS affectionato. Andi says she watches it “all the time.” We are together every Monday night at eight. She has never once watched it with me around. Oh well. Yes dear.

No doubt Fred Astaire rolled over with some of the moves Johnny Damon tried to make in a foxtrot to John Mayer’s ‘Centerfield.’ He was eliminated quicker than his 1999 Royals who lost 97 games. Kareem, at 7’1” was no Astaire though his 5’4” professional partner, Lindsay Arnold, did have some Ginger Rogers in her. They cha-cha’d looking like, well, a guy two feet taller than his partner. It was Manute Bol and Olive Oil. The Redskins Josh Norman has a better build than dance floor coverage. My highlight, that kept me watching, was Tonya who hasn’t missed many buffets since she left the ice. She was cross between bitterness for the past twenty-five years and a powder keg of emotion. Either way her body was now also keg shaped. Her perfect dance partner would have been OJ. In a performance Trump-worthy, she starting sobbing like she just hit a ten spot on a keno card when she found out she advanced to the second round. Sad, but much like a rare Trump press conference, it will keep me coming back.

I asked Andi questions about the show and she knew the answers. Or made them up. I wouldn’t know the difference. She wasn’t quite sure who the judges were other than two guys who flunked out of used car sales school and a woman whose Botox went awry. Whoever they were, they weren’t Kitty Carlisle, Tom Poston or Bennett Cerf, who lifted game show judicial seats to legendary status back in the day.

My cutting the rug days ended before it ever started. In fact, 53 years ago this coming Tuesday on May 8, 1965, after doing the cha-cha and alley-cat at my bar mitzvah reception, I hung up the dance shoes. I can’t cha-cha anymore but I can still do the alley-cat with that catchy da-dum beat and the clap and quarter-spin with the best of them. However, Nureyev isn’t threatened.

And with baseball, hockey and basketball all over the rest of the dial, I actually watched DWTS until the end but not without periodic interruption. Twenty-six year old Roy Berger snuggled next to me and laughed in my face. The 36-year-old leaned over and asked “are you out of your mind?” The 46-year-old said “I hope I don’t turn into YOU one day,” while the 56-year-old sympathetically looked in my eyes and said “I’m starting to get it, kid.”

And as much as I wanted to channel my inner Shikira at nine o’clock and stay awake to watch the Golden Knights hockey game that was just starting, I couldn’t do it. After an hour of DWTS, I was emotionally spent and out of gas.

So today, if birthdays were reduced to uniform numbers, double-sixes would get me Mario Lemieux, Ray Nitschke and heaven forbid, Conrad Dobler.

My gift to myself tonight will be an early bedtime. Instead of counting sheep, I’ll envision Social Security checks dancin’ in my head and try to get enough sleep so I can stay awake tomorrow until nine, not for the Cavs and Raptors or the Pens and Caps, but to hope my girl Tonya survives another DWTS week.

Happy birthday to me.