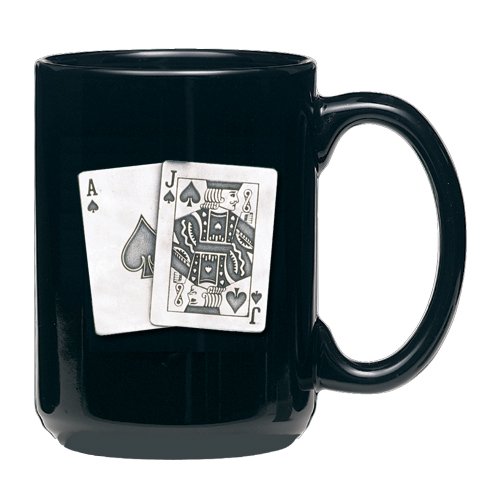 A few assorted crumpets with your Sunday Morning Coffee:

Nevada has done an above average job of managing the C-19 outbreak. To date, the state has had ‘only’ 8,350 cases but unfortunately 415 deaths. Still respectable but in a sad way. However, no jurisdiction has been hit harder in the labor market than we’ve been in the desert. 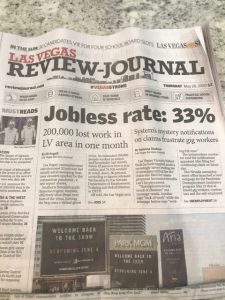 A state whose majority of the workforce is dependent on the tourism/hospitality industry, Nevada’s unemployment rate for April was a stunning 28.2%, far and away tops in the nation. Michigan at 22.7% and Hawaii at 22.3% captured the silver and bronze. The national average was 14.7%. For perspective, in 1933 during the worst of the Great Depression, as a country our unemployment was 25%.

Things figured to get worse out here in May and it has. Through the first three weeks of the month, Nevada’s unemployment rose to 28% while Las Vegas metro hit an unprecedented 33%. Staggering. We can’t blame this downturn on Jimmy Carter, can we?

Though it’s a long way back, hopefully the Nevada economy will get a jump start on June 4 when the state’s 441 casinos will be given the green light to open, albeit with covid restrictions. Not all properties are going to open at once and word is some of the Las Vegas Strip resorts may not reopen until 2021 depending on business levels.  It also was fortuitous that the Strip didn’t open any earlier and be subjected to the rioting, looting and utter disgust we saw elsewhere around the country this weekend.  No area would have been more prime pickings for these gangsters than a newly reopened Las Vegas Strip.

And even when the casinos reopen, who’s coming? That’s the biggest question this side of what does the dealer have under that six that’s showing? Nevada is counting on an influx of Californians anxious to party. And maybe there is something to it as Caesars Palace and its neighbor across the street, the lower-end Flamingo Hilton, are expecting over 6,000 guests next weekend. Let’s hope it’s a start.

McCarran International Airport saw a 96% drop in passenger volume in April. The April 2019 count of 4.3 million passengers was reduced to a sad 153,000 last month. A whopping decline beyond anyone’s imagination. So last week Derek Stevens, who owns the D Las Vegas and Golden Gate hotels in downtown Vegas, took a huge gamble trying to drive traffic to town. He purchased 2,000 one-way flights from twenty-four U.S. cities and gave them away on the D Las Vegas website. He called it “Keep America Flying.” They were gone in less than two hours. No strings. Stevens pays your way here; you get yourself home. And you don’t have to stay at either of his properties, though he hopes you do. 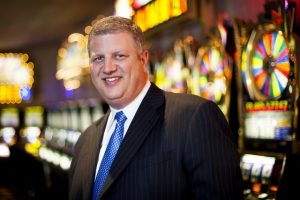 “I’m happy if people want to stay with us, obviously,” Stevens told the Las Vegas Review-Journal. “But at the same time, if they say, ‘I just want the flight (but) I’m staying at Wynn or Caesars or Bellagio, that’s great too. We’ve just got to get people out to Las Vegas.”

It’s certainly welcoming news for the employees and their families who make a living off the hospitality industry, which is just about everybody. But let’s not get too excited too soon. I believe, vaccine notwithstanding, that the vibrant and rocking Las Vegas we knew back on March 10 won’t return with full consumer confidence until March Madness, 2022. My wife tells me I’m wrong frequently. Let’s hope this is no exception.

Either Las Vegas’ reopening is going to be the beginning of a rebuilding success story for the ages or an epoch health disaster. Pulling hard for the former.

Here’s a tough one to believe – New Zealand, a country of five million people, has just one case of COVID-19. He/she must be really popular around town. 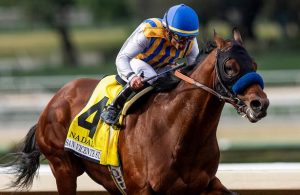 Nadal, the Kentucky Derby futures favorite, fractured his left front leg in a workout on Thursday and has been retired from racing to a life of chasing fillies around the farm. The Bob Baffert trained three-year old, unbeaten in his four career starts, was the odds-on favorite in this year’s Triple Crown series which has been turned upside down by the virus. The Belmont Stakes, which always ran last, will now be the first of the trilogy for this year’s crop of three-year olds. The Belmont will run on June 20 with its distance reduced from a mile and a half to a mile and an eighth. The Kentucky Derby, always the inaugural showpiece on the racing calendar, will now be second on September 5 at a mile and a quarter. And the Preakness moves from its traditional second spot to last on October 3, presumably still at the shortest distance of a mile and a sixteenth. This new schedule will not be as grueling as the typical Triple Crown series which featured three tough races in only five weeks. The new scheme, far less stringent on the horses that compete in all three, is stretched over fifteen weeks. It’s more athletic than endurance. The racing purists, against any change, already hate it which means it’s probably a good thing. With Nadal now living the life, Tiz The Law has become the Triple Crown horse to beat.

And speaking of the two-legged Nadal, his chief tennis rival, Roger Federer, led the Forbes’ 2020 list of the world’s highest paid athletes with $106.3 million in earnings last year from winnings and endorsements.

Sadly, we lost more than our share of entertainment legends the past couple of weeks.

“Good morning Mr. and Mrs. Cleaver, don’t you both look nice today. Mrs. Cleaver I love that dress you are wearing and Mr. Cleaver where did you get that lovely necktie? Are Wallace and young Theodore at home?”

Everyone growing up as a Boomer, at one time or another, had an Eddie Haskell in their lives. We had a few guys in high school and college whom we called ‘Haskell.’ Growing up our kids had friends whom we called a ‘Haskell’ though the kids didn’t know what we were talking about. They all had the same traits as the ‘real’ Haskell: ass-kissing, trouble-making weasels. As Ward Cleaver once said to June, “That boy is so polite it’s almost un-American.” 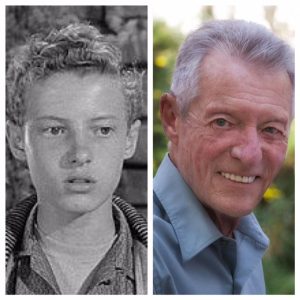 The two faces of Eddie Haskell.

Ken Osmond, TV’s Eddie Haskell, died the week before last at age 76. Ironically, his first appearance as the teenage scoundrel in Leave It To Beaver in 1957 was supposed to be an isolated role but the producers and the audience loved him so much he became a regular. He also appeared on Happy Days, The Munsters, Petticoat Junction and even in Lassie.

Osmond became an LA cop in 1970, growing a mustache to try and secure some anonymity from TV watchers who knew him as Eddie Haskell. He was shot five times while in a foot chase with a suspected car thief, his life saved by his bullet-proof vest. He retired from the police force in 1988.

Imagine being stopped for a traffic citation by Officer Osmond.

“I’m sorry officer for my transgression. I hope you can see fit to excuse me with just a warning.”

And after he gives you a ticket and walks away, undoubtedly under your breath in your best Eddie Haskell you mumble “Asshole.”

We also lost Richard Penniman, Little Richard, earlier this month at age 87. He had significantly more influence on the music of our generation than we ever realized. Little Richard sold over thirty million records and had one great line- “If only I had been born white, there never would have been an Elvis Presley.”

And sad to hear that Jerry Stiller also passed. Those of us old enough to remember The Ed Sullivan Show remember Jerry and his wife, Anne, as regulars with their Stiller and Meara comedy act. These days everyone knew Stiller as Frank Costanza, George’s dad on Seinfeld. He didn’t talk, he screamed. Incredibly, Stiller was in only twenty-six of the 180 series episodes. I would have taken the over on that one.

Phyllis George went from being crowned Miss America in 1971 to being the first woman to invade our manly world of professional football every Sunday when she sat as a regular on the NFL Today in 1975 alongside Brent Musburger and Jimmy ‘The Greek’ Snyder for a total of seven seasons. An anomaly at first, she paved the way for female sportscasters to be accepted as part of the mainstream sports landscape. Ms. George died on May 14 at the young age of 70.

Speaking of Musburger, he’s 81, and still going strong in Vegas, with a daily Sirius radio show on sports gambling live from the South Point Casino on the southernmost end of the Strip. He’ll spend Sundays this fall as the Las Vegas Raiders play-by-play radio voice.

If the NFL plays their games in empty stadiums this season, the league will lose about $5.5 billion in stadium revenue: ticket sales, concessions, sponsors, parking and merchandise. However, don’t run out and organize a Go Fund Me page for the Dallas Cowboys. Even after you factor in all those revenue losses, the franchise will still turn a $329 million profit. It’s good to be in the Jones family.

Give Netflix credit for totaling changing the dynamics of the television documentary which used to be as drab as afternoon tea with Mike Pence. Now some of the best stuff on TV are docs.

Baseball was always a key part of our summer. This year the country needs the game more than ever. Can the owners and players really be that stupid and selfish to be quibbling over money when they can have the sports’ stage all to themselves? Better hurry up. Before long it will be the fall and football, which will be joined this year by the NHL and NBA playoffs. At that point nobody will give a damn about baseball. Just silly, you guys.

Gyms in Nevada finally got the green light to reopen this week after being shut for two and a half months. It’s a moment I’ve long waited for but being honest, as every day passes, it becomes tougher and tougher to get motivated to return. I wonder how many regulars have found other things to do and will let their membership and their figures lapse? My over/under is 15%.

Stop me if you’ve heard this one already: Two masked men robbed a bank. Trump and Pence were immediately eliminated as suspects.

And finally, I’d like to offer something that attempts to makes sense out of the George Floyd situation in Minneapolis but I just cannot.

Be safe, be healthy and be smart. We’ll see you in a couple of weeks.