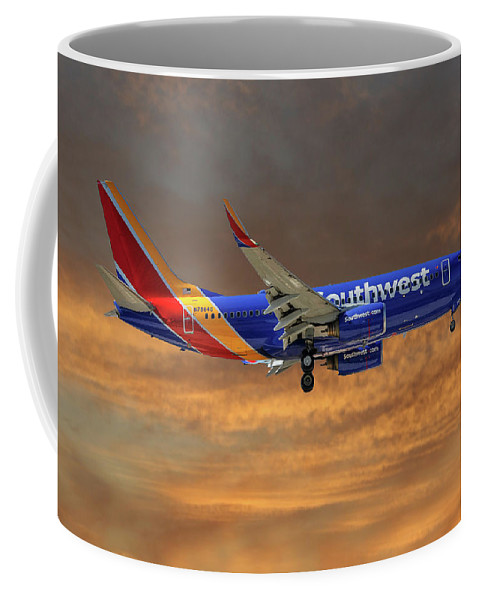 Sergeants Bilko and Carter had nothing on her.

Sgt. Bilko, the television Army boss in the mid-1950s and 60s, shouted his orders in a very rapid and high octave crescendo. Nobody in the platoon really paid much attention to him.

Sgt. Carter, Gomer’s USMC boss, was a shouter. Loud and clipped. His men tolerated him when he needed to blow off steam, which was whenever Pvt. Pyle was around.

However, neither were a General Andi. When my wife barks commands, Bilko and Carter move to the back of the barracks. Shazam!

“I gave you fifty alcohol prep pads. Do you see them?” Yes dear, they are in the plastic baggie you showed me six times.

“You have three face masks, two different versions, do you promise to wear one the entire time you are in the airport and on the plane?” I do.

“You have a four-once tube of hand sanitizer; you can’t use it enough.” I understand.

“Make sure when you get on the plane you wipe down the seat, the tray table, armrests and anyone sitting close to you.” Yes, ma’am.

“Don’t touch anything or anyone. Make sure you wash your hands with soap and water. The soap is the important part of that.” Got it.

“When you get your rental car DO NOT sit in it until you wipe the seats, the steering wheel, the dashboard, the radio dials and the door handles!” What about the carburetor?

“Don’t be a wiseass. This isn’t a game. This is a mission and you need to succeed. And one more thing- when you get to your hotel room call me right away. I mean right away.” I heard you loud and clear, consider it done.

The general, my general, wanted to make sure I had the proper artillery to conquer the battlegrounds that lay ahead. Last Sunday morning I marched off to war against the invisible enemy. The mission was to fly from Las Vegas back to Birmingham, Alabama, to attend a board meeting and return without getting sick. Avoid COVID-19 and anyone or anything that put me in harm’s way.

Andi’s heart was in the right place. I’ve flown over two million actual flight miles, but this trip would be different from any other. It was the unknown of how C-19 disrupted not only life but travel too.

It didn’t take too long to find out. Twenty minutes after leaving the general and her commands, the parking garage at McCarren International Airport threw me my first hurdle. I always park on level four. I did it for twenty years while we lived in Birmingham and for the last couple here in Vegas. I park on level four no matter where I am. That’s all I know. I drive up to level four and if there isn’t a spot open, I circle and stalk travelers walking to their cars until I find one. And not any ole spot but a good one near the elevator. However, this day there was trouble in sin city. The sign at the garage entrance said only levels one and three were open. Signs, signs, everywhere a sign.

I hated it. I hated being on level three. It was a club to which I didn’t belong. Though finding a spot, a choice one, wasn’t hard as the garage was virtually empty. I felt bad leaving my car in such unfamiliar surroundings. 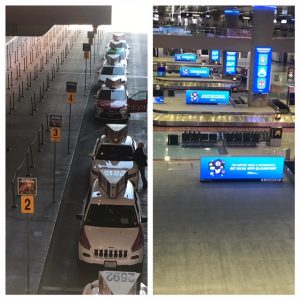 Not a sight seen very often at LAS— taxis waiting for passengers and a deserted baggage claim.

Walking into the terminal, I looked outside and the airport had something I’ve never seen before. There were plenty of taxis but no people. Ever try to get a cab at LAS? Ever have one waiting for you?

Baggage claim was empty. Neither a soul nor a Samsonite. It was Sunday morning but in normal times, with the time difference, the East coast and Midwest flights land early. Not this day. Why was this day different from all the others? Inbound flights scrapped.

The Vegas TSA line, normally mobbed with people smashed together like a Trump rally according to Trump, had one person in line other than me. I got a TSA pre-check voucher to avoid extensive screening. Made me feel big time. Once through security the concourse was populated by maybe five percent of what a normal Sunday should be. Three out of every four people wore masks. Yes dear, I did. Most shops and restaurants on the outdated Southwest concourse were closed save for a token Starbucks, a trickling of newsstands and for those desperate to get something to eat, a Jersey Mike’s. All the slot machines were covered and taped off. Socially distanced seating was plenty at the departure gates.

The flight experience itself was perhaps the most normal and comfortable part of the journey. Forty-three seats were booked out of 143. Social distancing was no issue. Flight left right on schedule. Maybe two or three people didn’t wear a mask at all onboard. I did except while I drank my coffee. It was tough to drink with those strings around my ears. After the safety briefing the flight attendants disappeared on the service-free flight.

Deplaning in BHM there were probably more people in the waiting area to board the continuing flight to Dallas than there were in LAS. Not by many though.

Avis was $36 a day, down from the typical BHM rate of $60-$65. There was nobody else picking up a car on Sunday afternoon but me. The agent wore a mask and gloves. I headed to spot #34. My gray Ford Fusion greeted me. I wiped down the car thoroughly as the general demanded.

I was a little surprised when I got to the Hilton. The front desk clerk had no mask, no gloves nor a protective plexiglass shield that seems to be in vogue everywhere else separating the consumers from the employees. I thought the lack of any protection was a bit cavalier. All hotel amenities were shutdown. No lounge, pool, gym or foodservice. The rate of $106 a night was about half of normal. Twenty-two out of 204 rooms were occupied. The clerk gave me my key pouch, hand-to-hand like in the BC era. I was joined in the elevator by two other hotel guests, each without masks. We were not socially distanced.

“I’m in the room, what’s next?” I asked Andi after thoroughly washing my hands with soap and wiping down my cell phone, again. “Start with the door handles, and then go into the bathroom and get the sink faucets and shower door,” she mandated. “Don’t forget the suitcase handle and the TV remote. The remote might be the most important thing.”

Things in Alabama were a bit more eased than Nevada. Old fashioned handshakes made a little comeback, replacing the new, trendy greetings of elbow and fist bumps. Restaurants and lounges were open, except in hotels, with proper distancing protocols. 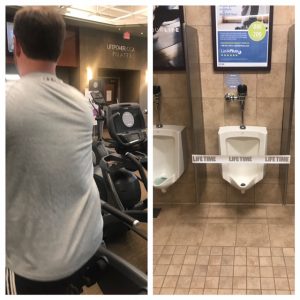 A Birmingham exerciser next to a blocked off machine and proper urinal distancing protocol.

The caution-to-the-wind moment for me was when I found out that my old gym – Lifetime Fitness – would reopen the next morning. I couldn’t resist. There were no member count restrictions. Every other fitness machine was available to use and social distancing signs were on the floor and machines as a reminder. There was also a rope across every other urinal to make sure nobody took any unnecessary chances. Not sure I knew it could spread that way, too. The crowd in the gym was about a third of normal. The whole staff wore masks. Virtually none of the members, save for one, did. Being in the gym again felt like old times. It was great and the sweat was exhilarating. The part I really didn’t understand was while we were schvitzing all over the place on the workout floor, the locker room and showers were closed. But the pool was open? Huh?

The board meeting went fine. Forty-eight hours later it was time to do the reverse route.  I was immediately struck approaching BHM by what must have been fifty Delta planes furloughed from near-by ATL, stacked almost on top of each other on the BHM tarmac. It eerily looked like the old airplane cemetery outside Tucson, AZ. 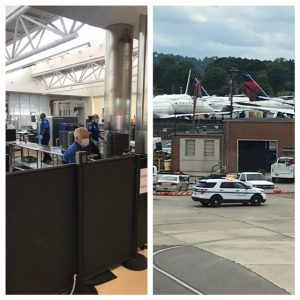 No TSA business at BHM and Delta plans stacked together in furlough on the tarmac.

I was the only one at BHM’s TSA. Well, me and four agents. Save for two newsstands and a bagel shop, all other outlets at the modern and friendly Birmingham International Airport were shut. Forty-five of us on the return flight. Five were on board without face masks: a woman watching a movie; a gent sleeping with his face smashed against the window and all three flight attendants who, without cabin service, were seated and relaxed during the flight. It bugged me that even though they weren’t working, they weren’t wearing masks. Not a real good message with that look.

The flight was on time once again. It’s amazing how quickly the airlines can turnaround an airplane when they fly at about a third of capacity, expedite boarding and limited loading of luggage and cargo. The boarding groups were ten apiece instead of the normal thirty.

Uneventful flight back home. Arrived safely. I’m glad I went. General Andi knew the game plan and had me prepared. Kudos to her. By flying, I felt I did my small part helping the industry get back on its feet. No regrets. I’d do it again, not quite yet for a weekend pleasure getaway, but for similar business circumstances.

Now, if I can only remember where the hell I parked my car.