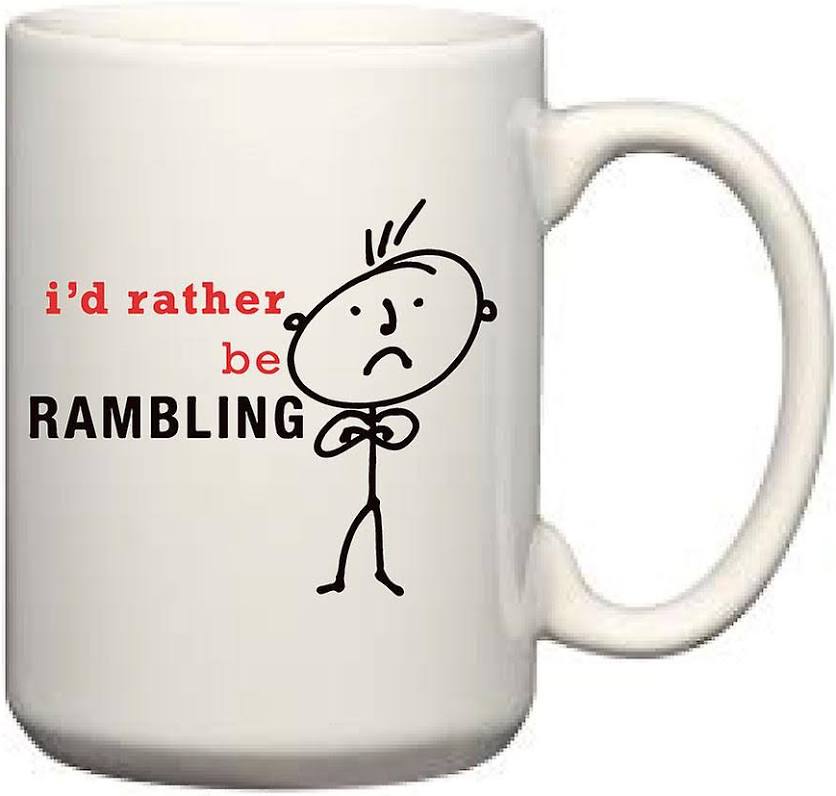 Las Vegas, NV — This sucks. I can get by without stuff I thought I needed. I’m okay, short term, with restaurants being closed and not being able to get a haircut. I’m doing much better than I thought without March Madness and baseball’s traditional opening day gone. I’ll miss Vegas Golden Knights playoff hockey but maybe they’ll find a way to play before the season becomes too stale. However, the one thing I am really struggling with is the loss of my two hours at the gym every morning. I am just miserable. I can’t duplicate that endorphin rush by walking outside or even on the golf course. I miss Alonzo, my trainer, pushing me to do one more rep than I really want to do. I hate Zo. I miss my post workout, co-ed social sauna. I miss gabbing with everyone who, like Prince, Cher, Sting, LeBron, Fabian and Sleepy Joe, I know by only one name. There’s Laurie, Doug, Chris, Travis, Joe, Shauna, Kathy, Sal, Tom, Anthony, Mike, Gary and Peter. My little daily gab group. I promised myself when Lifetime Fitness reopens I will never again complain about the lack of parking and having to schlep from the parking garage — a workout within a workout. I just want my gym, and my life, back. You do too, I’m sure. The good news is we are one day closer to coming out of this.

Yeah, I’m bored and I have a feeling Ibis and Deuce are getting tired of taking walks. They just lie on the floor and give me the look that says, ‘You go, we’ve had enough.’ 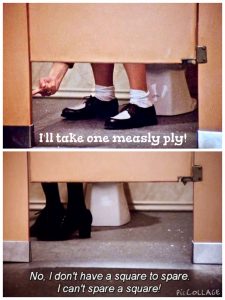 Who knew, a quarter of a century later, how apropos the 1994 ‘Can you spare a square?’ Seinfeld toilet paper routine between Elaine and Jerry’s girlfriend du jour Jane (Jami Gertz) would actually resonate. Sorry, we don’t have a square to spare these days either.

Nevada Governor Steve Sisolak has it all wrong. Strip clubs and cannabis stores have been classified as non-essential businesses. Ah, but no worries in the desert. The strip clubs now have drive-through shows and you can get your pot stash delivered to your front door. I love this state.

Out of nowhere, Twitter has become my primary news source.

So, I can’t be within six feet of my golf partners or the person ahead of me at Albertson’s but I can sit within six inches of a potential virus carrier on an airplane or train? Don’t understand.

The Stanley Cup playoffs in July and August? That will sure be fun when condensation hits the ice surfaces. The NBA, playing in arenas where there is a sheet of ice under the basketball floor, better have mops handy, too.

A reliable source inside baseball tells me, optimistically, they hope to begin play the first week of June. I’ll take the over.

Love the father, who posted after his son watched one of President Trump’s C-19 press briefings. He said, “Dad, he sounds like a kid who’s giving a book report but didn’t read the book.”

Anti-Semitic conspiracy theorists will have a ball wondering why the president decided to open the country again for Easter Sunday when he could have done it four days earlier for Passover Sedars.

Wimbledon will make a decision this week on whether or not to play the tournament. Because Wimbledon does everything proper and right, they won’t postpone. They will either play or cancel. Kudos. Wimbledon is played in July; it’s not some made-for-TV event that can be moved to August or September. The Masters, esteemed with the All-England Tennis Club in my book, should follow suit. Play in April or don’t play at all. The Masters can’t play in September because CBS is booked on weekends with their very lucrative football packages. So that means the Masters in July or August? Have you ever played golf in the South in the summer with 95% humidity? The only thing worse than playing is being outside watching. October or November is probably the target, meaning we will have two green jackets within six months of each other. No thank you.

Along with Wimbledon and Masters traditions, the Kentucky Derby is the first Saturday in May, not a make-up date of September 5th. Cancel it. I know the event is age sensitive, so run a special race at the November Breeders’ Cup for the top three year olds in the world. And you don’t have to go very far from Louisville to do it as the 2020 Breeders’ Cup will be at Keeneland, just 72 miles east on I-64 from Churchill Downs.

As long as we are over the other side of the pond and talking Wimbledon, sorry to hear Prince Charles was diagnosed with C-19 but comforted he is in self-isolation at his royal estate in Scotland. Britain’s Press Association said he would be “working from home.” Doing what?

Not sure why, but not surprised either, that 38% of beer drinkers polled said they will not drink a Corona until the pandemic runs its course.

Separated at birth: New York Governor Andrew Cuomo and Alabama’s Nick Saban? Both will be factors in 2024. Saban, perennially, for the collegiate football national championship and Cuomo for the 2024 Democratic presidential nomination. 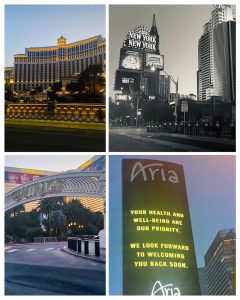 The fountains of Bellagio and the normal crowds watching them are dormant like everywhere else on the Strip.

Other than maybe Disney, the Las Vegas Strip was the happiest and most congested place on earth. Today, like Disney and Broadway, it is very dark and very sad. We took a drive on Friday night, from the Sahara Hotel down Las Vegas Blvd. to the MGM Grand, and we didn’t see ten pedestrians.

The NFL draft and all related events, which was projected to bring about 600,000 revelers to the Strip late next month, has been officially canceled. Everything will now be centered out of a conference room in New York and be a TV event only. Next year the draft goes to Cleveland (certainly in typical Cleveland draft fashion they will botch it) and in 2023 to Kansas City. For some reason 2022 is still open so hopefully that means we will get a do-over here.

Will coronavirus ultimately be a blessing, curse or excuse for Trump’s presidency?

Three weeks ago, Trump was a strong 2-1 favorite to win again in November. Barry Lieberman, my local concierge oddsmaker, tells me as of Friday he dropped to 6-5, still a slight favorite.

Talk about a guy that can’t catch a break. Harvey Weinstein was confirmed positive with C-19 earlier this week.

Did you know Harry Nilsson, the popular 1960s-70s recording artist of “Everybody’s Talkin’” and “Without You” fame, never performed in concert? Now you do.

Curly Neal passed away on Thursday at the age of 77. While his Harlem Globetrotter teammate, Meadowlark Lemon, got most of the laughs, make no mistake that it was Curly’s ball-handling that was the engine that drove the hi-jinx. From 1963 to 1985 he entertained millions of us kids and our parents. We then became parents and took our own kids to see the ‘Trotters. He was the rare generation to generation athlete whose skills never seemed to wane.

Maybe I’m jaded but over the past few weeks a 500-point drop in the stock market almost seemed like a good day. 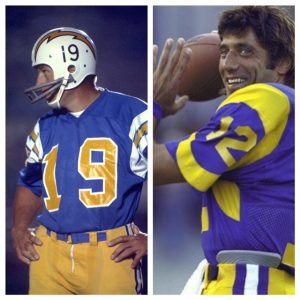 Will Brady have a more memorable end of his career as a Buc than Unitas (l) did as a Charger or Namath as a Ram?

Tom Brady decided six feet was still too close for his social distance comfort from Belichick so he opted for the 1,340 miles from Boston to Tampa to get social distanced away from his former coach.

You think it was just coincidence that Brady chooses Tampa Bay and then a few days later files a trademark application for TBxTB, his new apparel line?

And while we are on Brady as a Buc, does he become Joe Montana, who ended his 49ers playing days with a couple of successful years as a Chief, or instead the sad sight of Johnny Unitas as a Charger or Joe Namath as a Ram just running out the career clock? 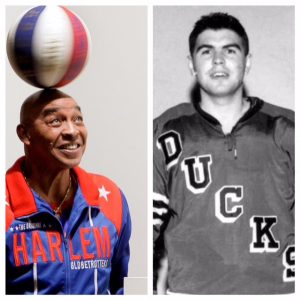 Curley and Kitchen, back in the day.

One of the niceties of social media and Facebook in particular, is the ability to connect and reconnect with people from our past. Probably nobody enjoys it as much as I do. A strange relationship developed the last three years with a gentleman named Wayne Kitchen. My dad took me to my first ever hockey game, circa 1963-64, to see the Long Island Ducks of the old rough and tumble Eastern Hockey League in Commack on Long Island. Wayne was on that team or joined it soon after. I was 11; he was a 19-year-old rookie. To me, he was bigger than life. The EHL was the model league for ‘Slapshot’ and in this case the movie reflected bloody reality. I didn’t think much about Mr. Kitchen for the next half century until somehow we connected as Facebook friends. Wayne was a devoted Sunday Morning Coffee reader and commented regularly. He was a guy I would have loved to sit down with over a six-pack of anything (other than Corona) and talk old times. He died suddenly Wednesday at his New Jersey home at age 75, only a day after posting on Facebook. Wayne Kitchen was a guy I knew all my life but never met. Strange how things go sometimes.

Has there ever been a better or more appropriate sponsor tie-in than Cologuard and the Senior PGA Tour?

Here’s one that’s pretty cool. Michael Rubin is a neighbor and, when he needs some cash, a golf partner, too. Last month in Sunday Morning Coffee we wrote about a reunion here in Vegas of the 1980 U.S gold medal winning hockey team. The next day I got this note from Michael, a former ABC advertising honcho who was at the USA-USSR semifinal game:

“Working for ABC Sports in 1980, we were entertaining our clients at the Winter Olympics in Lake Placid.  We were fortunate enough to witness the Miracle on Ice from the tenth row, center ice.  Sitting next to my wife (Dee Dee) and me were Luisa and Bowie Kuhn, then Commissioner of MLB. Bowie forced me to make a bet with him for $10 on the game.  He wanted the USA.  In the third period of the game, Bowie had trouble controlling his excitement and beat my right arm black and blue.  Best lost bet I’ve ever made.”

Before the morning coffee runs dry, go ahead and set a Netflix reminder for “The Big Show Show” which debuts next Monday, April 6. Proudly, it’s co-created and co-produced by our oldest son, Jason.

I can’t wait to start bitching again about parking at the gym.