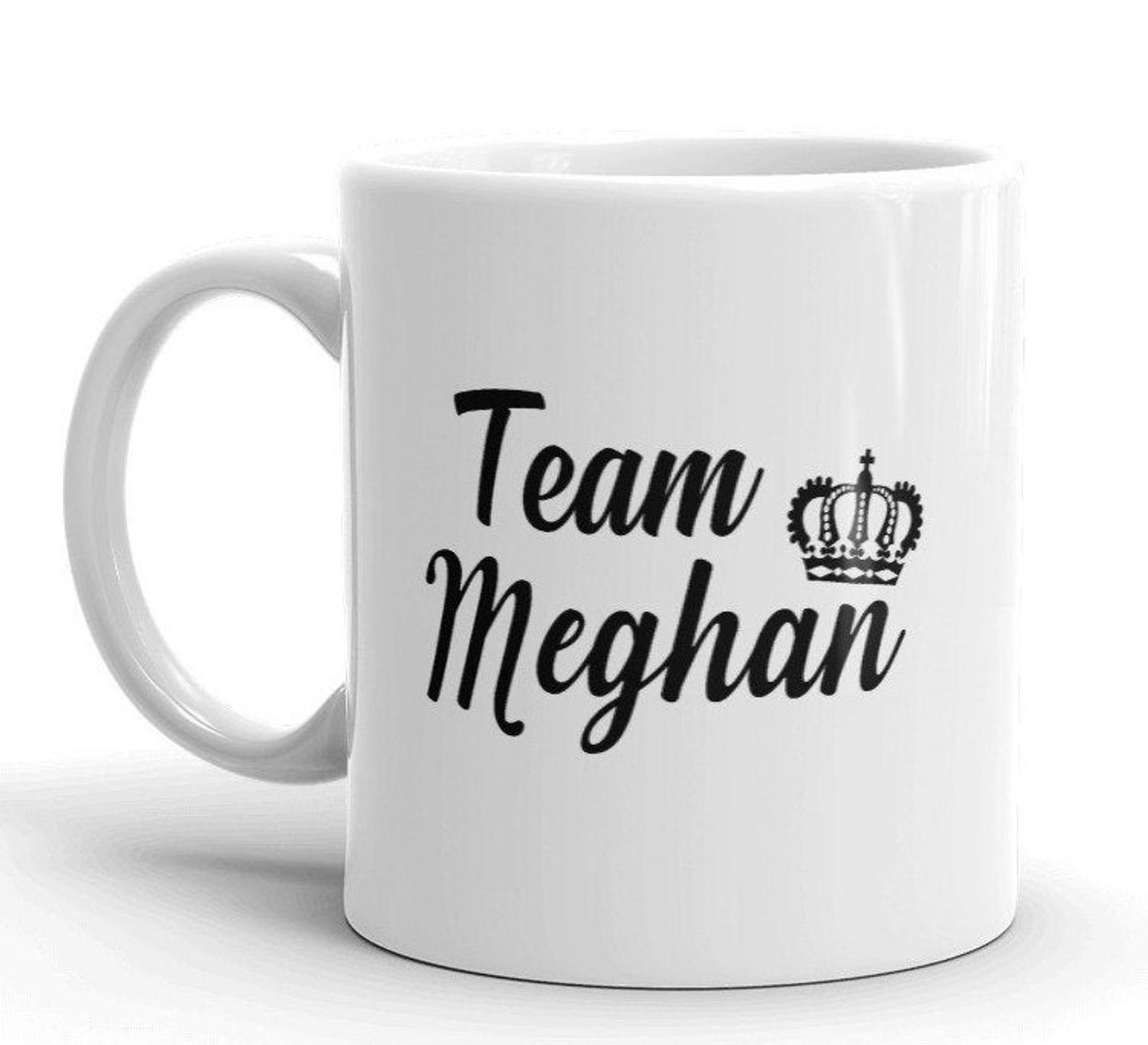 Yes, I’m guilty. I was one of the 18 million who sat glued to my Samsung a couple of Sundays ago and watched Harry and Meghan spill the pudding. I understand CBS paying $8mill for the rights. I understand why sponsors shelled out over $300,000 for each 30 seconds of promo time and I don’t begrudge Oprah or her production company for making oodles of quid by delivering the two faux royals. But what I don’t understand is what was in it for Harry and Meghan. Especially Harry, whose royal blood ultimately will prove to be thicker than marriage. He hasn’t been this bare since his night in 2012, ten miles down the Vegas road from us at the Wynn, when he played strip billiards. I get the bitterness they both displayed but this drama is best left in your own kitchen, not the world’s. And if Meghan would have only watched The Crown on Netflix like the rest of America, she would have sat through four seasons that were painstakingly slow at times but baked with historical significance. 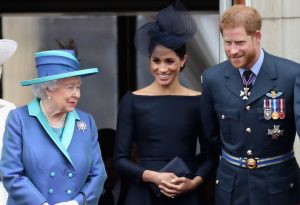 Happier days at the Palace.

She would have understood what she was marrying into and either accepted it or ran away like Harry’s last two girlfriends. Plus she would have gotten to see Olivia Coleman, one of my faves, with another superb performance as the latter-day Queen. This saga will eventually move on with the public but resonate deeply at the Palace. I can’t wait for the Queen’s audience with Geraldo.

And speaking of guilty, I got a summons for jury duty last week. I really hadn’t given any thought to juries still being seated in these weird times, but I came to find out they have been since February in Vegas. The summons included many provisions and reasons to be excused but having been vaccinated I chose to serve. The main reason was if I were on trial, I would want me serving on the jury, so this was my way of a little community give-back. The Clark County Courthouse is in downtown Las Vegas. I pulled into the Fremont Street parking garage at 7:50 am for an 8 o’clock report time. Across the street from my parking spot was the Mob Museum; I guess close enough to the courthouse for a reason. I walked past the Golden Nugget and resisted the temptation of $10 in slot play for a free Bloody Mary. I didn’t think that was a good look in front of the judge. I walked past two wedding chapels and one marriage license kiosk before arriving at the courthouse. It was 8:05. There were maybe a dozen people on line in front of me and a half-dozen behind. The clerk came out and said because of COVID restrictions the jury room is full and we can all go home and get credit for time served. That was it. I was done at 8:20. It was less time than it took Meghan to piss off Fleet Street. That probably wraps up my jury duty days.  Final personal tally is one jury served: about seven or eight years ago in Birmingham, Alabama; a felony vandalism case. The defendant was no doubt guilty, but the evidential glove didn’t fit, and we had to acquit. My neighbor OJ would tell you it’s the good old way of American justice.

It’s been a long year for many reasons not the least of which was the blackout of attendance at sporting events. Even though I’m a little slower in getting around and not nearly as effective at dodging, pushing and elbowing through crowds any longer, I very much enjoy a live event. When the lights went out on games last year, Andi and I were at the PAC-12 basketball tournament just off the Strip at T-Mobile Arena. 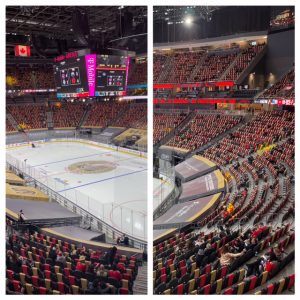 The arena seats not in use are covered with alternating red and gold banners.

I was at T-Mobile for the first time in over a year last Monday night. This time it was a hockey game. Our Vegas Golden Knights against the bad guys from San Jose. The local health board okayed a plan for attendance at 20% of capacity. That meant about 3,500 in a 17,000+ arena. Felt like an Atlanta Hawks home game. T-Mobile for a Knights game is hands-down the most raucous arena in the National Hockey League. Not on this knight. You knew something was different right from the get-go needing a COVID-free certification to enter. The normally bustling entry rotunda was as quiet as Cuomo re-election headquarters. Seats socially distanced which meant one party, either a two, four or six-person pod to a row. All out-of-use seats designated by a gold or red Knights banner draped over the seat. Unprecedented ease of movement on the concourse. Rest rooms and a cashless concession stand in each seating area. Everyone, not just Knights goalie Marc-Andre Fleury, had to wear masks. Piped-in crowd noise almost like an ‘applause’ sign at a TV show taping. Music too loud for the sparse gathering. In-game watching was more like a scrimmage with nobody in the building. Ticket prices inflated to reflect the anticipated demand. And at game’s end, being dismissed by seating section— you know that won’t fly with me. Hopefully, come April 1 we can be back to 50% capacity and by the playoffs in June a full house, or almost full. In hockey, arena atmosphere makes the experience.

The Knights also recently proved it’s okay for a professional sports franchise to publicly admit when they make a mistake. And this one was a doozy.

On February 26, the Knights entered into a multi-year partnership with a Mexican company called UpickTrade.com. The Knights couldn’t have done proper due diligence because UpickTrade was not a credible sports wagering site like MGM, Caesars or Circa but instead, a tout service. UpickTrade was to become the “official sports pick service partner” of the Vegas Golden Knights. No financial terms of the partnership were announced but for the entry level price of $89 a month, customers would have access to daily sports picks. The gambling tout services have a reputation, well earned, of being as sleazy as the guys on Las Vegas Blvd. passing out those annoying cards to have girls delivered to your hotel room. But first they need to slap the stack of cards twice on their slimy thighs. Upick seems to fit well. They claim they have more than 6,000 clients “making a living off of sports” with annual returns of 28% to 687%. Yeah, sure they do. Nothing says sports winnings better than a Mexican gambling service. They only thing the Guadalajara-based company didn’t promise was a portion of their receipts would be used for Wall construction. Or maybe they did. This would have been a disaster for the Knights and frankly the NHL. Immediately the local public and media outcry was loud and negative. Whoever inside the Vegas organization approved this clearly didn’t know the difference between regulated gaming and shoddy pick-em services. However, much to their credit, when the Knights got a swift education, they announced the termination of the arrangement. Upick told ESPN they were devastated and “in shock about the decision.” My guess is the cerveza and tequila still hadn’t worn off from celebrating how any legitimate business could have been that naive to enter into this arrangement in the first place. Despite the cancellation, Upick still has a hockey player wearing the Knights colors on the front page of their website. Very classy. And for the Knights, who are so beloved in this town and don’t make many bad decisions, kudos for recognizing their mistake and taking quick corrective action. The experience also turned out well for Vegas area employment: whether by coincidence or not, a week after terminating the agreement the Knights added a new position, Chief Legal Officer, to oversee and advise on all legal affairs of the organization.

Finally, happy 95th birthday the week after next to Shecky Greene, one of my old-time comedic heroes.

Shecky, Chicago born and raised, was part of the big three in comedy for me: Don Rickles, Buddy Hackett and Greene. Both Shecky and Hackett were free-form story tellers while Rickles’ specialty was good natured insult.

Mr. Greene’s background was interesting. His career was hampered by depression, bipolar disorder, stage fright, panic attacks, gambling, drug abuse and alcoholism. He had the whole buffet but somehow overcame it to be funny. He took a break from the stage for six years from 2003-09 because of panic attacks and stage fright. He returned to performing before easing into retirement.

One of the great Shecky stories was in 1968, under the influence of who-knows-what, when he drove his Oldsmobile right into the Caesars Palace fountains. When the car finally skidded to a halt, and with water pouring down, he did what anyone would do who drove into the fountains: turned on his windshield wipers. Soon the police arrived and knocked on his car window. Shecky rolled it down and said, “No spray wax.” 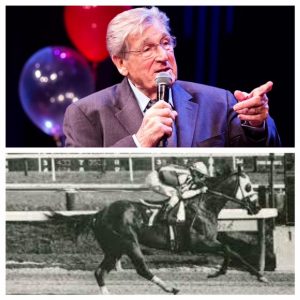 A couple of Shecky’s.

As much as Rickles had a warm relationship with the entertainment godfather, Frank Sinatra, Shecky’s on the other hand was contentious. However, Shecky gives credit to Sinatra for saving his life. Greene loved to brag about a remark he made that offended Sinatra. In turn, according to Shecky, he sent five of his men to rough-up Greene and teach him a lesson. Shecky said Sinatra saved his life when after a while Frank said, “Okay boys, he’s had enough.”

Greene, a longtime Vegas resident, was a thoroughbred racing junkie. For those of you who enjoyed playing the ponies back in the day, you probably remember the racehorse named Shecky Greene. The four-legged Shecky led the 1973 Kentucky Derby for the first seven furlongs before being overtaken by Sham. At the top of the stretch a runner named Secretariat made his move and pulled away to a three-length win and the start of his heroic and historic Triple Crown run.

The race finished Secretariat-Sham-Our Native with Shecky Greene falling back to sixth. Undoubtedly, that’s just the way UpickTrade.com predicted it would.