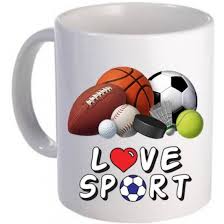 Sports, the toy department of life, has a way of keeping things real.

For me, coronavirus wasn’t real until this week. Oh sure, my portfolio was taking a pounding but at least my advisor fees were lower. Otherwise, life was unchanged. It was like a tornado blowing through Oklahoma — you know it happened, but you were out of the way and didn’t need to take cover. Last Sunday night the “holy shit” moment hit. The BNP Paribas Open tennis tournament in Indian Wells, California, was canceled. Andi and I were supposed to be there this weekend. I thought to myself, ‘geez that’s a bit of a knee jerk response, don’t you think?’

Life went on. We changed plans, called off the dog sitter and made tee times for the weekend. No big deal. Thousands of people spend weekends in Vegas, so would we.

By Wednesday night, except for the tennis, life was still normal. The Pac-12 basketball tournament was in town. Stanford, coached by friends from our days in Birmingham, was playing their backyard rivals the University of California in our T-Mobile Arena. Tickets were left for us at will call. Not having to pack for our Thursday morning trip to Indian Wells, we went to the game.

Stanford was awful. They fell behind early, trailed by ten at the half and then were pummeled in the second half. Somehow, they were nine point favorites. At least that’s what the betting slip I bought said. Instead of having to watch them bumble for forty minutes, we were glued to news breaking on our phones. Alerts were coming faster than Pete Maravich drilling jump shots on a hot streak. First came word that the remainder of the Pac-12 tournament would be played without spectators. I wish they had made that decision one night earlier. Then messages that other conference tournaments around the country would follow that same lead. Then the bombshell: the NBA was suspending its season. Normally that would make a Knicks fan gleeful but not this night.

It got my attention, something the week-long panic shopping at Costco failed to do. Almost simultaneously with the basketball news, details of the President’s Oval Office address pushed on Twitter. Then my sister-in-law in New York called to ask if I could do anything to help get my nephew home from Prague. At that point I really wasn’t clear on the details of the Trump speech but knew it was enough to rattle my sister-in-law and probably a whole bunch of other people.

With Stanford trailing by sixteen, we left the game. I didn’t like my chances of a twenty-six point turnaround with two minutes remaining to cover my wager. Once home, we watched the DVR of President Trump’s remarks. He was awful. Nervous, shaky and reading almost like he never saw the script before, which actually was a much better bet than Stanford minus nine. Nobody could have any confidence that the administration was on top of this. The overnight stock market numbers immediately swooned. I had a feeling big troubles were brewing in river city. 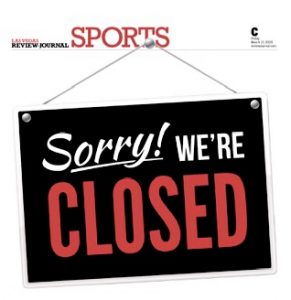 Thursday, all of the other sports dominoes fell. Conference basketball tournaments canceled, then all of March Madness. The NHL went on hiatus, which caused a huge hole in the Vegas sports landscape for locals as our Golden Knights were co-favorites to win the Stanley Cup. Then Major League Baseball went down for at least two weeks, followed by the College World Series months from now. The Boston Marathon and even the XFL. The toy department of life was serious and sobering. Word hit Friday about Augusta National. No Masters in April? Say it ain’t so, Mocha Joe.

The next large sports gathering still scheduled is WrestleMania in Tampa’s Raymond James Stadium, where more than 70,000 are expected on April 5. Actually 70,002 because my son Jason and I are supposed to be there, too. Don’t judge. Jason is in an exciting partnership with the WWE and Netflix. But it won’t matter as Wrestlemania will surely go down for the three-count this week.

When that happens, the only thing left on the April sportscape is the NFL Draft here in Vegas. Over 650,000 people would have been expected for the four-day festival, closing part of the Strip. Unfortunately, the draft will ultimately be moved to a conference room at Caesar’s or back to HQ in New York. Someplace without people. Jets fans will be deprived of their rite to hoot en masse.

Las Vegas has been hit very hard this week even without the NFL Draft pulling out just yet. So far, twenty-three conferences with about 450,000 attendees have been canceled. That’s a lot of buffets. And it’s not over. With March Madness now fouled out, it eliminates three big spending, big carousing, big eating weekends here. The betting volume on the basketball tournament last year at local sports books was $350 million, double the Super Bowl. This weekend the Strip is about as empty as a Tulsi Gabbard rally. It will get worse. There’s trouble on the Boulevard.

When things are lousy sports have always been our fallback. We knew 9/11 was behind us, never forgotten nor forgiven, but we were on the path to healing when George W. Bush took the mound, against Secret Service wishes, and threw out the first pitch of Game 3 of the 2001 World Series. He was serenaded by the Yankee Stadium throng chanting “USA, USA” in endorsement of the actions the president displayed in our time of crisis.

So now we wait. We wait and hope. In fairness, Trump’s message was better on Friday and the market immediately responded before the closing bell capped the rally. The country’s economy will be stretched and tested before this is over. Our will and patience will be stretched and tested. All of our communities will be impacted. There’s no doubt Las Vegas will be one of the hardest hit by the nature of its tourism needs. As a nation we have been through crisis before but never like this. But get through it we will. Eventually. We always do.

I won’t be stupid but I don’t know that I will drastically change my habits, either. If I have plans to go somewhere and the venue is operating, I’ll go. If I have plans to travel and the flights are flying, I’ll go. I do know that the healthiest thing I do every day- the fitness center first thing in the morning- is probably the unhealthiest place I can be. It astonishes me that people can use a workout machine, sweat all sorts of bodily fluids all over it, and not have the common decency to take one of the ample wet clothes and wipe it down. Sadly, it happens every day, pandemic or no. That’s atop my irk-list along with people that don’t pick up after their pets. Especially on my front lawn.

The newspaper business, already on the down slope, will need to be creative in their sports pages to sustain, or massive layoffs are coming. It’s not like advertisers are lined up to claim that empty space that used to be game summaries and box scores. And if you think talk radio and SportsCenter spend too much time on the NFL draft prospects and mock drafts now, you haven’t heard anything yet. What else will they have to dissect and analyze ad nauseam? The only positive is Stephen A. Smith’s airtime might get reduced without the NBA. Might be a good trade off.

We won’t know we are on the road to recovery until we see the next jump ball or power play or the first pitch of the baseball season. And when it does, we are off and running again. The toy department of life needs to reopen.

My two rites of spring — the start of the baseball season and Masters Sunday — have been erased from the calendar. With baseball it’s happened before, when the 1972 and 1995 seasons were delayed because of a players’ strike. Eventually baseball will be back. However, none of us have ever been through a spring without the Masters.

I’ll miss them both. But what I’ll really miss, more than baseball and golf, is President Trump telling me how well my 401(k) is doing.