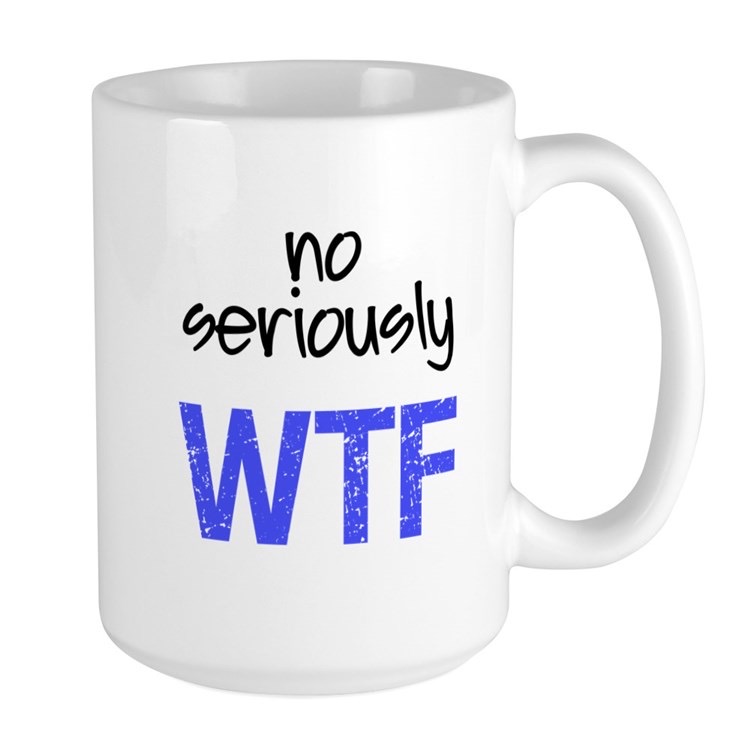 EWTF? I mean really what’s going on in our country, our society, when public schools and places of worship are no longer safe and secure sanctuaries? It’s one thing to listen to the news and shake our collective heads when we hear incident after incident. It’s another when it hits close to home. And I’ve had two of those in three weeks. On Saturday, June 4 here in our Las Vegas community of Summerlin, we had an intruder come to Temple Sinai and try to talk his way in while Shabbat services were underway. He said he wanted to learn Hebrew. From security photos, he wasn’t the type of guy you’d want sitting at your seder table. Fortunately, it never progressed beyond a verbal confrontation with our security force outside of the building. Denied entry he threatened to come back, allegedly with a weapon, but fortunately never did. The police apprehended him three days later, before releasing him under the auspices of a misunderstanding. On June 16 the folks at St. Stephen’s Episcopal Church in Birmingham, Alabama, weren’t as fortunate. The church is located less than a mile from where Andi and I lived for twenty years. We had to pass St. Stephen’s every time we either left or came back into our subdivision. During a congregational dinner, three were murdered by a fellow diner. One was the aunt of a longtime colleague of ours at Medjet. The shooter entered the premises with packages of shrimp cocktail for the dinner, a bottle of scotch and a handgun. Which begs the question, a sad one, on what kind of security protocols did the church have in place? At our temple, we have a security guard out front and a metal detector that everyone, no exceptions, has to pass through. Had the church had a similar arrangement, and I can only speculate they didn’t, would that simple inconvenience have saved three innocent lives? So senseless. So WTF.

If you are coming to Vegas don’t rent a car. Instead, ride share or walk. Nevada gas prices have just surpassed Hawaii to become second highest in the country, right behind California, at an average of $5.64 a gallon. That’s a casino red chip and some change.

Pro-choice Nevada has long been the nation’s wedding capital but now will also become a destination for women’s right to choose.

Back in my day they were school Principals. Today, trendy, they’re now the Heads of School. 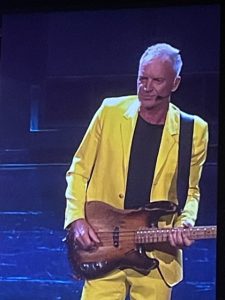 Sting in his sartorial splendor.

Date night two weeks ago was at Caesars. Dinner at The Palm and then into the Colosseum for two enjoyable hours with Sting. Sadly, I checked the next day and Jos. A. Bank is out of those snappy canary yellow leisure suits.

All steakhouses are overpriced, and The Palm is no exception, but it’s nothing like the price of a recent lunch in NYC. An anonymous bidder paid $19 million for him and seven of his friends to have lunch with Warren Buffet at Smith & Wollensky’s steakhouse. The annual charitable fund raiser was started by Mr. Buffet’s late wife Susie in 2000. This year’s winning bid is over four times greater than the $4.5 million in 2019, the last time the event was held, pre-Covid. Sure hope the bidder asked for a dessert menu.

From the ‘they are only fibbing if their mouths are moving’ department. I ran into Pete DeBoer, former head coach of our NHL team the Vegas Golden Knights, a couple of weeks ago at our golf club. He had been fired a week earlier. We gabbed for a few minutes and then I asked what he was going to do next. He told me he was looking forward to taking a year off, play more golf and enjoy the Vegas area while collecting one more year of a handsome payout from the Knights. Oops, that didn’t last long. The Dallas Stars waved a four year, four million a year deal in front of DeBoer last Monday. All of a sudden relaxing and golfing for a year didn’t look as appealing.

If you didn’t see the CBS News Special Watergate: High Crimes in the White House, stream it. Probably more fascinating today than it was 50 years ago this summer. Engaging, dark, deceitful, revealing and corrupt wrapped up in a two hour factual and comprehensive summary hosted by Leslie Stahl with Woodward and Bernstein commentary. Worth a watch.

And one more if you didn’t see it is the current edition of HBO’s Real Sports and the profile that Mary Carillo did on Chris Evert in her personal and family battle with ovarian cancer. Pretty moving.

If you are looking for a good, down the middle news site, give Smerconish.com a look.

And on that subject, why do people feel the need to force their politics on me? It happens all the time— on the golf course, at dinner, at social gatherings and then the emails I get almost daily championing a position. I work really hard at keeping my preferences to myself, especially in this space where I try to be an equal opportunity basher. Sure, I have my beliefs on the hot-button issues of the day and partisan preferences, but it remains personal. Don’t infringe your values on me and I promise I won’t on you. I do however have good news for both the Biden and Trump bashers on each side of the aisle: neither one will be our next president. 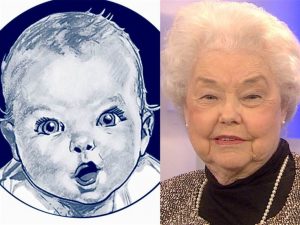 We all knew her by face but not by name. Ann Turner Cook died last week at the age of 95. Since 1928 she has been the image on all Gerber baby food products.

For some reason, on a whim, we went to a Korean BBQ joint for dinner on Wednesday night. Never again. Why would I want plates of raw meat tossed my way to cook? Way too much work and contrary to a pleasant dining experience. It’s one and done.

In baseball it’s hard enough to win one game, just ask the Cincinnati Reds, never mind 44 in a row. Unless you pull for St. Mary’s Prep in Orchard Lake, Michigan, who concluded their season a perfect 44-0. The Eagles finished as the number one ranked high school baseball team in the nation.

And as long as summer is now officially here, some other baseball notes:

The Pacific Coast League, the highest minor league loop out West, has changed both the size and distance of its bases. The bases are now 18 inches in diameter, from 15, with the hope of reducing collisions and injuries. The distance between the bags is now 87 feet, from 90, to try and encourage more base stealing and excitement. We are reminded of the words penned by the late, great sportswriter Red Smith who once wrote, “90 feet between bases is perhaps as close as man has ever come to perfection.” No longer if you are playing in the PCL.

I probably knew this once upon a time, but like so many other things have forgotten it. The only player in major league history to hit a walk-off inside the park grand slam home run was my favorite player as a kid, the Pirates Roberto Clemente. It happened on July 25, 1956. Clemente was 20 and in his second year in the bigs; I was four and still staring at Ann Turner Cook. The Pirates trailed the Cubs 8-5 in the bottom of the ninth. Two walks and a base hit by Bill Virdon loaded the bases. Chicago brought Jim Brosnan in to pitch to Clemente with nobody out. He hacks at the first pitch and puts the ball over left fielder Jim King. The ball hits the wall and rolls toward center field. Clemente in his speedily awkward, hands flapping, running gait was off to the races. He ignores third base coach Bobby Bragan’s stop sign and heads home. Ernie Banks captures the relay from center fielder Solly Drake and throws to catcher Hobie Landrith. Clemente beats the throw but over-slides the plate. He reaches back before Landrith can apply the tag. Game winner. Walk off slam. The only one ever.

And before we leave the grand slam aisle, we must acknowledge Texas Rangers teammates Toby Harrah and Bump Wills who in 1977 hit the only back-to-back four bases in the game’s long history.

One last baseball note. Imagine the parlay odds you could have gotten on this father-son combo: Vladimir Guerrero Sr., who retired in 2011, hit 87 home runs in his first 403 career games. His son Vladimir Guerrero Jr., who presently plays for the Toronto Blue Jays, hit 87 home runs in his first 403 games. That’s a big deal. But it almost pales in comparison to Cecil and Prince Fielder. Cecil, the dad, a UNLV product who debuted in 1985 with Toronto and won a World Series with the Yankees in 1996 and retired an Indian in 1998. He slugged 319 career homers. Prince, the son, who broke in with the Brewers in 2005 and retired as a Ranger in 2016, also hit 319 career homers. That’s good enough to tie with Pops for 122nd on the all-time dinger list. Now that’s incredible.

I have no problem with any golfer who wants to make more money bettering themselves. So no issue at all with the guys going to play on the LIV Golf tour. I originally thought the PGA was being a bully by denying them from playing on the big stage. But the more I think about it, the PGA is private and can choose to associate with any independent contractor they desire. Somewhere there has to be a middle for both sides and we’ll eventually get there. Meanwhile, do you know what LIV stands for? It’s the Roman numeral 54, as all LIV Golf events are 54 holes with no cut.

Strongly disagree with Wimbledon banning all Russian tennis players, including men’s top seed Daniil Medvedez, from the fortnight which begins tomorrow. To be consistent, I hope they also bar Russian ticket holders from attending and remove all the Stolichnaya from the grounds. No doubt that will bring Putin to his knees.

And finally, a few mornings ago I walked into the locker room at the gym and there was a 20-something fumbling with a hair dryer trying to get it started. He asked me if I knew how to use it. I laughed. “Kid, take one look at my head. Do you really think I know anything about hair dryers?”