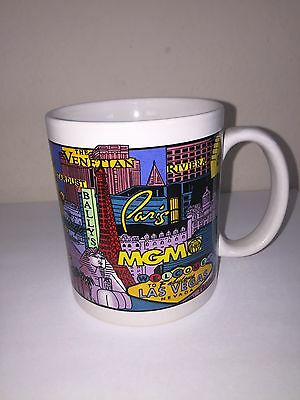 March 17, 2020. It was probably the darkest day in the state of Nevada’s history. Literally.

Governor Steve Sisolak ordered all businesses to shut down including the heart of the state — its hotels and casinos. COVID was spreading like Russian dressing on a coffee shop Reuben and the time to take action was now. Elvis had left the building.

Las Vegas mayor Carolyn Goodman, a political independent, called the Democratic governor’s decision “insanity” and urged him to reconsider. She volunteered her city to become a “control group” for the progress of the pandemic. CNN’s Anderson Cooper and late night talk shows had a field day with her.

Sisolak brushed off the mayor’s comments: said he wasn’t going to play games with people’s lives and both he and we would know when it was time to return to ‘normal.’ Ultimately, after months of partial business build-back, June 1, 2021, was the day to turn the lights back on, the band had returned and the party wants to rock.

Five days after June 1, Andi and I sat in a packed T-Mobile Arena, the five-year-old gold ringed building that sits just west of Las Vegas Boulevard right behind New York-New York and the Park MGM hotels, and watched a hockey game. We were joined by 18,100 of our closest Vegas Golden Knights friends in an atmosphere almost exclusively free of pandemic caution. 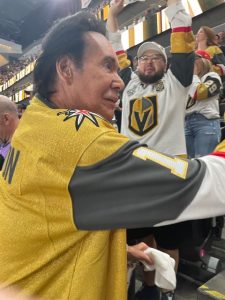 Las Vegas, a city and an economy crippled by COVID fifteen months earlier, has been resuscitated. At the hockey game nobody except for concession workers and the two goalies, Vegas’ Marc-Andre Fleury and Colorado’s Philip Grubauer, wore masks. People were yelling and spraying peanut shells and over-priced beer on those lucky enough to be seated in front of them. It was like old times. High-fives, not fist bumps, were all over when the Knights did something good which was often. Nobody wore protective gloves. You know it was a big event as Mr. Las Vegas was sitting in the section next to us. Wayne Newton, only 79, bought a soda from the hawker and said ‘Danke Schoen.’  The kid had no idea who this old guy with a plastic surgeon’s face, dyed jet-black hair, and wearing a Golden Knights jersey was. He looked at him quizzically. What Wayne really meant was ‘Thank you very much.’ Fortunately, he didn’t break into ‘Daddy, Don’t You Walk So Fast’ which he’s probably saving for Father’s Day.

All the arena bathroom stalls were on-limits once again. All sinks in use. The urinals no longer taped off and socially distant. No health questionnaires to be completed before entry. In fact, everything was ‘normal’ with the exception of all concession purchases being cashless. For the first time dollar bills are no good in Las Vegas.

About midway through the first period Andi said, “This feels so right again. It’s like we just came out of the twilight zone back to where we were.”

However, facts are facts. Clark County, Las Vegas’ home seat, has a population in excess of over 2.2 million with less than 50% vaccinated. Sisolak has done a more than admirable job guiding this state through the crisis. Positive testing, despite the lackluster vax rate, is at a 12-month low of below 4%. The town is packed every weekend with tourists making that 4% number even more impressive. Hotel prices are on the rise to unreasonable. Dining reservations, unless you want to eat at 10:30 pm, hard to get. And you know things have returned to where they were as casinos have reversed their customer-friendly decision on free parking and now it’s all paid once again. Penny wise, pound foolish. Or in today’s terms #foolish.

The world’s slowest airport baggage claim at McCarran International has become painstaking slower with the rush of travelers and their overstuffed luggage. Leave the long sleeves and slacks at home; it’s 95 on a cool day here. The only thing more tedious than staring at the carousel is trying to get a scarce airport Uber or Lyft which puts old-fashioned, high-fare taxi cabs back in vogue. Taxi drivers still try to convince you, in languages you can’t understand, the quickest way to The Mirage is not by way of the back roads to the Strip, but instead taking a route which goes through Arizona. Distasteful and dishonest.

Conventions and trade shows play such a key part of Nevada’s economy. In 2019 a record 6.6 million conventioneers visited Las Vegas with an economic impact of some $11.4 billion. That’s a lot of $2 blackjack.

So, eyes were wide and smiles plentiful once again this week with the sighting of cement in the desert. First time in 18 months. While some smaller trade shows and conventions have returned, the one everyone was waiting for to hit town was the mega World of Concrete Show last Tuesday. Normally in their annual January slot the trade show draws 60,000. This year the forecast was for maybe half which, all things considered, is tremendous. The World of Concrete is the first of eight shows that will return this summer along with the NBA’s Summer League. Both the men and women USA Olympic basketball teams will also train here and play international exhibition games at the MGM Grand Arena. Larger events like the Men’s Apparel Guild, the National Mining Expo, the National Association of Broadcasters, National Finals Rodeo, the World of Concrete again, but in its regular window, and the giant Consumer Electronics Show all plan to return this fall into the winter. The Las Vegas Convention Center will finally have a chance to debut its new $1 billion expansion. Things are busy. It’s all very good news. 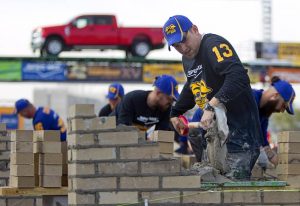 Time is of the essence trying to cement the ownership of that truck.

The highlight of last week’s Concrete Show was the Spec Mix Bricklayer 500 competition. You’ll probably recognize it as the ‘Super Bowl of Masonry.’ If you had David Chavez of Houston to repeat his 2018 title, go right to the cashier’s window. Chavez laid 678 bricks in an hour and despite cramping hands recovered in enough time to hold the $5,000 winners check and the keys to his new Ford F-150 truck. There’s little doubt he’s the fastest trowel in the land.

And speaking of the laying bricks, strip clubs have reopened around town, too. Even out-of-town brothels like the Mustang Ranch are back in action again but no word on whether a mask or just what other kind of protection is needed. The reopening had vehicles backed up to the highway off-ramp. One thing is pretty clear — sitting at home watching Hulu with the Mrs. has run its course.

Probably the biggest COVID risk this side of the Olympics, and the Mustang Ranch, is the return of the buffets at some of the hotel properties. They are reopening. Coupons are tough to find. Other resorts have found the buffet space more profitable for alternative uses like craps tables. Blue and red crunchy tortilla chips have transformed into $25 green chips.

Showrooms are booking to capacity. Most are coming back with top tier talent in July and August. All will be full steam by Labor Day. Tickets for the multiple Cirque shows around town went on sale this week with tickets moving faster than you could say Wuhan; sales were up 50% over a traditional summer buying period. The popular residencies’ dates are filling up with marquee draws. The summer concert calendar will get started in earnest on July 10 as Garth Brooks opens Allegiant Stadium with 65,000 set to rock the Las Vegas Raiders new home. Masks are optional, Resistols and Stetsons not.

The third new hotel to open in the last six months, after Circa on Fremont Street and Virgin just off the Strip, debuts a week from Thursday, June 24, with the 3,500 room Resorts World Las Vegas occupying the space that formerly housed one of my all-time favorites, the Stardust. Resorts World is owned by a Malaysian investment group but will fly a Hilton flag. They wasted no time booking talent: Celine Dion, Carrie Underwood, Katy Perry and Luke Bryan all will have residencies in their new showroom. We assume not at the same time.

Andi and I can feel things hopping as the guest room at our house, which was dormant since a year ago March, is filling up again. Our rates are competitive and include free internet, free parking, a newspaper at your door each morning, fresh coffee and Andi’s turndown at night. Waffles are not included but being greeted every morning by a lower-eyelid-lacerating chow mix is. All we ask in return is a favorable review on TripAdvisor.

Maybe the best news for both residents and visitors happened in the final days of the Nevada legislative session two weeks ago. A bill allowing the opening of cannabis lounges around town becomes law effective this fall. Now locals have someplace to go to forget the sizzling summer temps, the gusty year-round winds and the Raiders defense. Tourists can escape the thoughts of pesky resort fees, buffet lines and outrageous taxi fares by going one toke over the line.

And if you get really buzzed from some Sin City Kush and find yourself at a Golden Knights hockey game, you’re not hallucinating. Elvis may not be in the building anymore, but Wayne Newton still is.