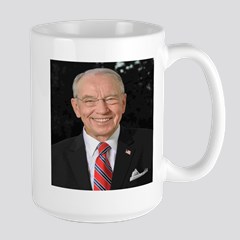 Cathy Dorricott knows me pretty well. She should. We were college dorm neighbors and friends a half century ago at Miami. We lost contact for about 40 years but reconnected five years ago and have done some projects together. I write, she edits and corrects me. Now we are in touch weekly as she edits Sunday Morning Coffee from her Philadelphia home. When I told her a few weeks ago we were taking two weeks off she said, “I’ll believe it when it happens.”

Okay, she was right. Big deal. Bottom line is there is too much going on and too much stacking up to sit on the sidelines for a fortnight. So this weekend we write from Pittsburgh where, originally, I was going to play in a Pirates old-guys baseball tournament. However, three eye surgeries in seven months later, the surgeon thought it would be a better idea if I stayed in the dugout rather than risk a bad hop ground ball and a fourth surgery. Instead, I am coaching a team in a Pirates old-guys baseball tournament.

Chuck Grassley, really? When I moved to Iowa in 1984, Grassley was in his first term as a United States Senator. Today he is in his seventh. Multiply that by six-year terms and that’s 42 years in residence, longer than even Celine at Caesars. He’ll be 88 years old in September. The only senator who’s been in the Capitol longer is Vermont’s Patrick Leahy but he’s only a kid at 81. Grassley’s present term ends on December 31, 2022, when he’ll be 89. What will he do next? Right now he plans to run again. It’s all Grassley knows. However; not so fast my Republican friend, whose picture is on our featured coffee mug. In a recent poll by the Des Moines Register, 27% of likely voters think he should be re-elected while 64% said they feel like it’s time for someone new to hold the seat. Of Republicans, 37% said they are ready for a change while 51% said they would back Chuck for another term. The good news for those looking for a change is Grassley said if does run again and presumably wins, 2022 would be his last election. Good to hear. That means his next term will finish when he’s 95 years old. I’ll take the under. How do you spell term limits?

It’s tough to watch the fall of a legend but Roger Federer looked old and disinterested during his quarterfinal loss at Wimbledon on Wednesday. Fed got hammered in straight sets by a Pole named Hubert Hurkacz, bageled 0-6 in the third. Coming into Wimbledon, Hurkacz had lost six straight matches. A couple of years ago Roger would have eaten this guy for lunch. Physically however, it becomes harder and harder for an athlete ready to turn 40 to compete against the kids of today with only a day’s rest in between matches. Federer is arguably the best tennis player I’ve ever seen over the course of a career, and I’ve seen them all from Rod Laver to Hubert Hurkacz. Without argument Roger’s the classiest and best liked athlete of my generation. There’s no doubt when it’s time to go he will do it with grace.

No surprise here but with the influx of people coming to Vegas to catch up for two years of lost celebrations, the Nevada COVID positivity rate is spiking.

Those who came in May, came with cash. Nevada casinos won a record $1.23 billion during the first month that casinos could begin operating at full capacity.

Congrats to Mississippi State on their first College World Series championship a few weeks ago. With that win, only Kansas State and Virginia Tech are the remaining Power 5 (ACC, SEC, PAC-12, Big10, Big 12) conference schools to never win a team championship.

Sometimes you just gotta shake your head. Cole Beasley, the veteran wide receiver for the Buffalo Bills was asked if he would get vaccinated before the start of NFL training camp and tweeted this reply: “I will be outside doing what I do. If you’re scared of me then steer clear or get vaccinated. I may die of COVID, but I’d rather die actually living.” Thanks for clearing that up for us, Cole.

Who ever said being the head coach of the New York Jets isn’t attractive on a job resume? It sure worked for Adam Gase, fired after last season with a two-year Jets’ record of 9-23. He wasn’t out of work long and was recently hired as the offensive coordinator for Lincoln High School in Ypsilanti, Michigan. My guess is Gase will find the skill level of players on both teams to be about the same.

Pulling for England to beat Italy in today’s Euro Final at Wembley Stadium. England and their backers are starved for international success not winning anything since the 1966 World Cup, which also was contested at Wembley. Not even the Jets have been on that long of a drought. Let’s hope today’s the day, blokes.

Here’s something I know you’ve been wondering about. Over 178 million Americans, half the country’s population, has at least one tooth missing.

Happy birthday to Doc Severinsen, who turned 94 on Wednesday.

Who recorded the most top-40 hits and never had a number one? If you said Fats Domino with 35 you’d be close. It was James Brown with 41 singles that never topped the charts.

As we get older we want time to stand still but we root for the clock to keep running when our favorite team is ahead.

Here’s a baseball mind teaser. Houston became the first team in MLB history to record a double play on the first pitch of an inning. How’d they do it?

Slip slidin’ away: the preseason American League favorite Yankees, who are awful, and the always, except this year, competitive Cardinals in the non-competitive National League Central. Both are on the verge of falling out of their division races if they haven’t already. Also my season wager of Cincinnati under 81.5 wins is almost a goner. Oh well.

Baseball’s All-Star break is this week with all the festivities happening in Denver, not Atlanta where they belong. According to Todd Dewey of the Las Vegas Review-Journal, if you were a gambling sort and bet $100 on every San Francisco Giants game through the first half of the season you would be ahead $1,884. Second-best would be Seattle with $1,831 lining your pockets. Conversely, $100 on every Arizona Diamondbacks game would have cost you $3,321. Jacob deGrom is the best pitcher in baseball but not a guy you want to ride to make money. A hundred dollar bet in each of his starts only returned $163 while Casey Mize of the Detroit Tigers netted a league leading $912.

The only way a double play can happen on the first pitch of an inning is the way it did in the Houston-Cleveland game on July 4, aided by baseball’s new rule of placing a runner on second base to start extra-innings in a tie game. On the first pitch of the bottom of the 10th, Cleveland missed a sacrifice bunt attempt when Roberto Perez popped the ball back to the pitcher, who wheeled and caught the runner off second. One first pitch, two outs.

We’ll end this week with a cute little anecdote my friend Herbie Shainker tells about his late mother, Loretta, who passed away a few weeks ago just shy of her 105th birthday. Loretta could be a cantankerous old gal; everyone always knew where they stood with her. Loretta loved her family and also loved to roll the dice. She lived in Cleveland but whenever she came to visit Herbie in Vegas, trips to a Strip casino were mandatory and often. Some years ago a gentleman sidles up next to Loretta at the craps table and starts to make small talk. “I’d really love to spend the night with you,” he brazenly said to her. Loretta took one look at the suitor and snapped, “Shut up and roll the dice.” He did. And he made number after number, point after point. Loretta raked in the chips. Finally after making another point she looked at him and asked, “How do you like your eggs in the morning?”