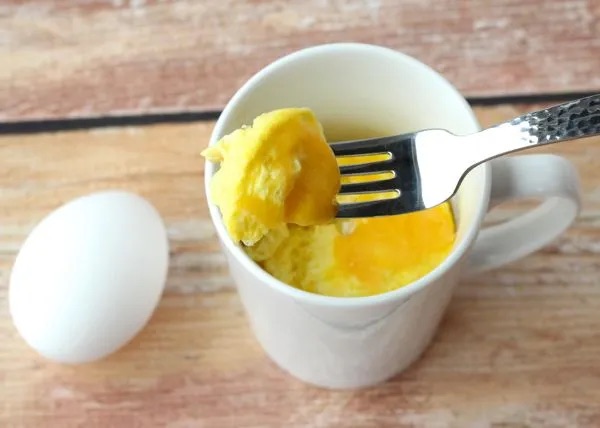 A whole bunch of stuff to scramble up this morning while the East coast digs itself out of the weekend weather mess:

I used to think Stanley Cup playoff hockey was the most gripping of all sports to watch but after last weekend’s divisional NFL games, I’m not so sure anymore. Each game was more exciting than the last, capped by Kansas City’s miracle win over Buffalo. Watching the unpredictable actually happen, watching great athletes perform at levels unimaginable, watching teams get knocked down and get back up swinging; it will be a long time before four games, back-to-back-to-back-to-back, come close to being duplicated.

As a chronic leave-an-event-early kind of guy, it warmed my heart to see thousands upon thousands of Kansas City fans exit Arrowhead Stadium when they thought their Chiefs were dead—down three with only 13 seconds -remaining. Hope the car radios worked.

There is no debate on whether the existing NFL playoff format needs to be changed. It does. It’s not right, nor fair, that teams play to a standstill after 60 minutes and a flip of a coin influences the outcome. Ten of the last 11 NFL playoff overtimes have been won by the team that possessed the ball first. Change it before another team gets Buffaloed.

If you are an AFC fan of any team other than the Chiefs, Bills and maybe Bengals, the caliber of play last weekend shows how far everyone else has to go to be in that class. Really phenomenal.

The great part about being a Jets fan, if ‘great’ and Jets can be used in the same sentence, is we know we’ll have our Sundays in January conflict free. Thus today, a previous commitment will keep me from watching the NFC and AFC championship games. I’m okay with that, a sure sign of aging and/or really poor gambling. Probably both. After getting my money clip smashed last weekend by the Bays, Green and Tampa, I’ll pass on today’s games and instead go see My Fair Lady as the Broadway touring production comes to Vegas. I could have lobbied to get out of it but didn’t. When Andi reads this I’ll still have that small window to escape but won’t. No Matt Stafford, Jimmy G, Joe Burrow or Patrick Mahomes for me today. No worrying about San Fran and KC covering, which would have been my plays if I weren’t going to a play. Instead, I’m on Eliza Doolittle, Professor Henry Higgins and a little bit of culture. Do I make it to intermission without peeking at the scores? Not a chance.

There’s been enough said this week about baseball’s Hall of Fame voting that you don’t need my two cents, but you’ll get it anyway. David Ortiz, a steroid user before it was taboo, gets in. Good for him. If Ortiz is a HOFer then Barry Bonds and Roger Clemens are, too. Bonds and Clemens had two careers: one before steroid testing and one after. Their stats when they were ‘clean’ are HOF worthy. End of discussion for me.

When it comes to class, knock British pop singer Adele off the list.  The toughest, most in-demand Vegas concert ticket in years, maybe ever, was for her Weekend’s With Adele ‘residency’ at Caesars Palace, due to begin last Friday, January 21, and run through April. Twenty four hours before the first show, with thousands of Adele fans already in town paying well into four figures for tickets, never mind air and hotel costs, their favorite singer canceled the tour. She was all over the place with reasons: Covid, set design flaws, shipping delays, unhappy with her back-up singers and a bundle of more excuses. I don’t know much about her, but a bit of a kook seem to fit the bill. Not impressed. 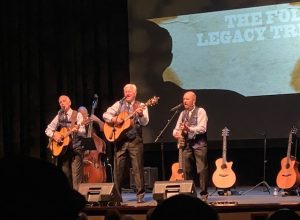 You just can’t find entertainment like this for $25 anymore.

We actually had tickets for Adele in April and now await the rescheduling. Some think it won’t happen at all. I wouldn’t know Adele if she were on the treadmill next to me at the gym, but Andi wanted to go and when we were invited as guests it was a simple decision. So to try and temper some of my wife’s disappointment, I stepped up and consoled her with $25 tickets to see the Kingston Trio last Friday night. Go ahead, you can say it, I’m a sport. At least I was born when the KT recorded in the 50s; not Andi. This is the third, maybe fourth iteration of the Trio, but the steep price didn’t keep the 300 seats at a local performing arts theater empty. Hip with the times Trio guitarist Rick Dougherty told us at the outset to sit back, relax and have a ‘chewable.’ He didn’t need to tell me twice. To say the crowd was old, well the median age was deceased. It was as racially diverse as a Klan dinner. They started at 7, wrapped up at 8:20. Some in the audience were still awake. I didn’t have to leave early or rush to get out as I knew I could outpace all the walkers and wheelchairs. And if we ever get to see Adele, there’s no way she can do Hang Down Your Head Tom Dooley like the Kingston Trio.

Getting scary the last few weeks with the losses of Dwayne Hickman, Meat Loaf, Louie Anderson, Ronnie Spector, and New York Islander Stanley Cup legend Clark Gilles. Ages respectively were 87, 74, 68, 78, and 67. When you’re approaching 70, this hits all too close to home.

Three weeks after the fact, I can report that everything I assumed about Indianapolis as the site of the College Football Playoff championship game turned out to be true. It was an awful place to both host and attend. Temps were in the teens, wind chill about zero and with a Monday night kickoff at 8:20 Eastern absolutely nothing to do to shorten a really long day. For the first time since its 1970 release, R. Dean Taylor’s song Indiana Wants Me; Lord, I Can’t Go Back There has personal meaning.

Bet you didn’t know this: in his 22 seasons in the NFL, Tom Brady finished his career credited with 13 tackles.

Something else you didn’t know is Israel is the only nation in the world that entered the 21st century with a net gain in their number of trees.

If reports the Raiders are on the verge of hiring Patriots offensive coordinator Josh McDaniels as their new head coach are true, Vegas needs to beware that Bill Belichick’s coattails are short. In Belichick’s 27 years as an NFL boss his winning percentage is an incredible 67%. Over that same period of time, seven of his assistants have become head coaches but only won 41% of their games. McDaniels left New England to become Denver’s head guy in 2009-10 compiling a record of 11-17, 39%, before getting the boot. If this materializes, McDaniels with six New England Super Bowl rings, will get a chance to show the master what he learned as the Patriots visit Vegas next season.

Viva Las Vegas. The city scorned by professional sports for decades will be the site of this week’s NHL All-Star Game and the NFL Pro Bowl.

Bally’s, on the iconic Las Vegas Boulevard corner that also houses Caesars Palace and Bellagio, has gotten very tired over the past decade. Thus its owner, Caesars Entertainment, is rebranding the property as Horseshoe Las Vegas.

There’s plenty of money around this town for resort/casino rebranding and refurbishing. Nevada casinos won an all-time record $13.4 billion, with a B, in 2021 easily surpassing the previous best of $12.8 billion 15 years back in 2007. Most benevolent were slot players contributing $9.2 billion followed by the table games of craps and blackjack at $4.2 billion. Sports books won $445 million and roulette another $428 million rounding out the annual haul.

Hockey on the NHL level is the most physically demanding of all professional sports. That’s what makes Philadelphia Flyers defenseman Keith Yandle’s accomplishment last week even more daunting. On Tuesday night Yandle played in his 965th consecutive regular season game, breaking Doug Jarvis’ old mark of 964 which stood since 1987. In an era where players sometimes sit for unexplained reasons, Yandle, 35, hasn’t missed a game since March 26, 2009. However, he should be looking over his shoulder as Arizona’s  Phil Kessel has played 943 games in a row. One hard body check to Yandle and Kessel moves into the top spot. 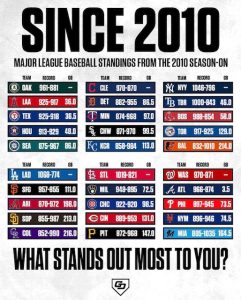 The Yankees, with the most wins in the American League over the past 11 seasons, have zero World Series appearances to show for it.

Two NFL teams that have totally different expectations are the Texans and Jets. Both sides had first year head coaches this season and finished at 4-13. Houston wasted no time firing David Cullen. The Jets, on the other hand, were organizing a parade for Robert Saleh, who doubled their win total from the previous season.

I’ve been accused of having too much time on my hands, but it’s nothing like whoever tabulated the cumulative baseball records and standings of each team since 2010. The chart shows the winningest team over that stretch were the Dodgers with 1,068 victories while the Marlins with 1,035 losses were the tops in futility. The Dodgers won the NL West by a cumulative 111 games over the Giants, while the closest race in that decade-plus was the NL East with Washington three games better than the Braves. Colorado finished 216 games behind LA, the largest differential in all the divisions.

This was supposed to be my baseball fantasy camp week with the Pirates, but for the second year in a row we were scrapped by Covid and rescheduled for December. That means if all body parts hold up and a higher authority sees fit, I will play baseball in my 70’s. That would be an accomplishment for a kid who couldn’t play very well in his teens, either. In the meantime, 16 of us who were scheduled to be playing ball this week will instead head to the Pirates’ spring home in Bradenton, Florida, for three rounds of golf. No matter how lousy our golf is, and it’s bad, we will look like touring pros compared to the way we play baseball.

A week off next week, we’ll be back on Super Sunday with the ‘Niners and Chiefs.