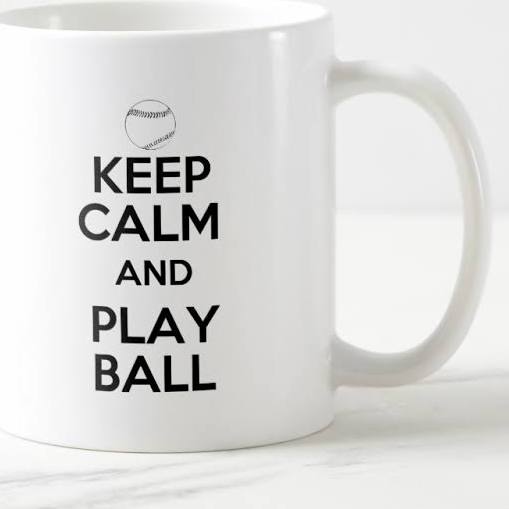 An hour, maybe two from now, I’ll step into the batter’s box, wish the umpire a good morning, smooth the dirt with my back foot, give the catcher’s right shin guard an OCD love tap with the knob of my bat and then dig in for the most important plate appearance of my life.

It’s a moment I’ve played over and over again in my mind for 155 days. When you’ve never had a truly meaningful at-bat, it’s pretty hard to say the next one matters, but this one does. I’ve been thinking about it non-stop since August. It’s personal.

And it’s not really the at-bat that matters. I’ve had a couple hundred of them since 2010. Prior to that there had been a forty-two year hiatus since I stepped up to home plate just four times in 1968 playing for the Clarke High School JV. Well, I really didn’t play. I watched Steve Rothenberg play first base. I hated Steve Rothenberg. On May 25, 1968, our last game of the season, coach Bud Chianese started me after I had sat out the previous nine games. “Berger, let’s see what you can do,” he barked while reciting the line-up. He knew damn well I couldn’t do shit or he would have used me instead of having me shag foul balls the whole season. After all, he had Steve Rothenberg. I hated Steve Rothenberg. I had two at-bats that day against Island Trees in a game we lost 3-1. I walked and reached on someone’s error. The box score was memorialized in a torn, decaying carton in our attic. My wife says I save way too much trivial stuff from my past. I think she’s wrong.

Two score and two passed before I picked up another wooden baseball bat. I was fifty-seven years old in 2010, debuting at Pittsburgh Pirates Fantasy Camp in Bradenton, Florida, where I am today to begin my twelfth week-long camp, despite telling Andi I was only going to do this once. What I didn’t realize is she really loves this week too; not so much for me, but for her. She asked me if I could find a two week camp. Since 2010, I’ve had almost two hundred at-bats with two being memorable: a 2014 walk-off game winner in a Yankees uniform that resulted in a book cover, which I may have mentioned before, and then two years later, a 180 degree turn as a Pirate – punched out on strikes on a full count to end a game with the tying run at third, winning run at second and my dad watching. Neither matters as much as today.

And despite whatever happens this morning: base hit, K or something in-between, it really makes no difference. What it stands for is much more significant, which is why I’ll take few seconds longer before I step into the box to have a personal moment of thanks with my higher authority.

From the time I wobbled out of anesthesia on August 18th in Birmingham’s Grandview Medical Center cardiac ICU unit after having my chest opened to repair five heart arteries – cinco de bypass – I’ve thought about today. Not “what will happen”, but whether it was even possible?

Five months and three days ago swinging a bat and throwing a baseball wasn’t in the game plan and not even comprehensible. In fact, back in August, getting out of bed by January 21 seemed much more of an immediate concern than eyeing a forty-five mph fastball with ninety-five other old guys.

But here I am. Somehow. I was back in the gym three weeks after my surgery, though at a moderately embarrassing pace. Concurrently I began cardio rehab, graduating after eight weeks instead of ten, and clearly the class valedictorian as my eighty-year old classmates drooled with envy. Literally.

I never had any real post-surgical pain as forecast but did have a lot of discomfort. Eventually I got stronger and the discomfort went away. I’m now in the gym at 5:45 am, six days a week, not going at the pace I was pre-bypass, but generating a good schvitz nonetheless. I know I’m really lucky because if I would have ignored the early warning signs you would be drinking your Sunday morning coffee today over a boring newspaper instead of a scintillating blog post. For that, you are almost as lucky as me.

All my life, the thought of heart surgery gave me chills. Especially if I was the patient. Being sliced open for five repairs was beyond comprehension and something in my mind not all the Xanax at Walgreens could ever temper. 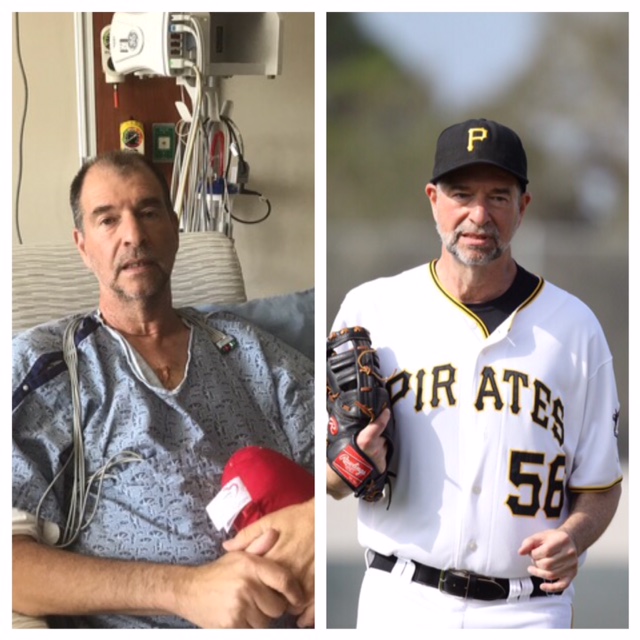 I’m not sure if it was five long months or five short ones, but my rehab goal was to go from hospital gown on August 18 to baseball uniform this morning.

But I’m getting there. It took about three months before I could actually look at my chest in the mirror again. In fact, the handiwork on my incision is so good, I don’t think I’ll have any reservations about my morning dip in the hot tub this week with some of the other boys, bragging about what kind of ballplayers they used to be. Steve Rothenberg denied me my chance. I hate Steve Rothenberg, though less than I used to, since he’s become a Medjet member.

I’m at Pirate City, the spring home of the real Pirates, getting ready to put on my uniform in a clubhouse that was used by Clemente, Stargell, Mazeroski and my other childhood heroes. You can now add Berger to that list. Steve Rothenberg is a prosthodontics dentist in Darien, CT with the day off and hopefully reading Sunday Morning Coffee. Life for both of us is indeed good.

Today is the day I fantasized about since August. Life is so much clearer now, friendships mean so much more and what I thought used to matter is now, for the most part, only noise. I like the way I feel physically and mentally. This morning I’m excited and I’m nervous. As long as my chest doesn’t rip open when I swing a bat or throw a ball this week, I will put it into the ‘W’ column, my biggest lifetime win.