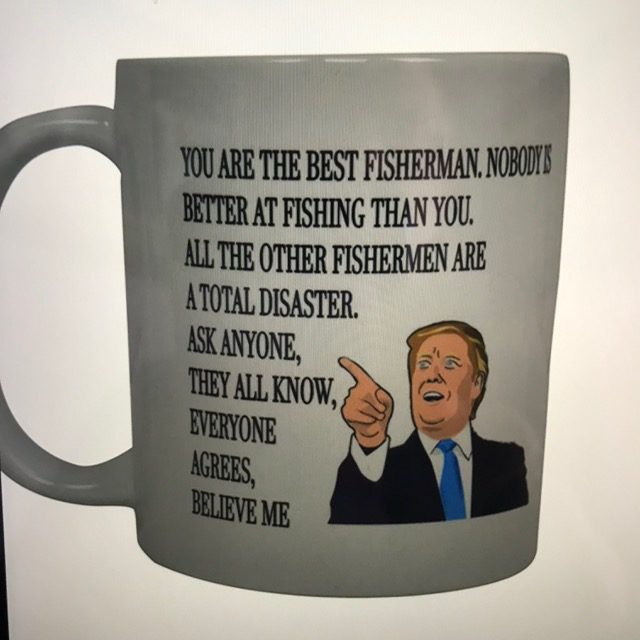 Sadly, for all six of you Sunday Morning Coffee readers, this will be the last one for a couple of months.

I’d like to tell you we are taking a winter hiatus and going fishing but the only place you’ll find a Jew fishing is at the seafood counter inside Publix. What we’re really doing is taking a break so we can revamp our website with a fresh look. It’s a blow to most of you, I understand, but you can overcome the void with some mainstream fake news.

So before we pack the rod and reel, let’s clean up the out-tray:

Have I really become that predictable? Two weeks ago, for the third straight year, my son Scott and I attended the college football national championship in Santa Clara, California as, of course, ‘Bama partisans. Clemson put a quick end to any fun we planned.

That night and the next morning, I got a flurry of texts and emails not wanting to know how we enjoyed the game or expressing how good Clemson was and how badly Alabama played. Instead, all everyone wanted to know was “how late did you stay?”

We left with 11 minutes to go in the fourth quarter, about a minute after Nick Saban split.

Interestingly, the Alabama-Clemson match-up was only the fourth between conference champions among all the bowl games played this season. The other three? The Orange Bowl between Oklahoma and Alabama; the Rose Bowl between Ohio State and Washington and of course the obvious one, the Boca Bowl featuring UAB and Northern Illinois. Now you know.

Southwest Airlines founder Herb Kelleher passed away earlier this month. He seemed like a great guy to work for, revolutionizing the domestic air industry. His original business plan was drawn on a cocktail napkin in 1967 and four years later Southwest finally got in the air. But not even Herb’s foresight could have imagined the company would generate $358 million in ‘early boarding’ fees last year.

People who constantly say “…it’s so annoying,” annoy me.

The Jets won their only Super Bowl 50 years ago this month, January 12, 1969. Nothing about the Jets organization says it won’t be another 50 year wait. At least.

1969 was too easy for a kid growing up with New York sports. The Jets, Knicks and Mets all won that year and we thought that would always happen. Since, it hasn’t been so marvelous. The Knicks and Mets have each won once, and of course all these years later the Jets are still the Jets.

Sixty-nine was also the year three hard partying, beer drinking blokes from Houston got together. For half a century the same three — Billy Gibbons, Dusty Hill and Frank Beard — have been playing blues, country and just some plain Southern rock-and-roll under the banner of ZZ Top. Gibbons and Hill are easily recognizable for their trademark flowing white beards while beardless Beard, the drummer, is a beard in name only.

So, Friday night we ventured the ten miles over to the Venetian Hotel for my first ZZ Top experience. The theater held 1300, demographically all of whom were me’s. The three ZZ’s, each just shy of 70, played their entire portfolio in 75 minutes, starting at 8:15 pm and ending promptly at 9:30. It was wonderful. The crowd was too old to stand through the show so everyone had a sightline. The band gave it all they had, tuckered out by half-nine, and the rest of us were in bed by 10:30. The way it’s supposed to be.

And while we are on Vegas shows, if you only have the budget to see one, don’t miss Absinthe at Caesars. Fantastic!

I don’t know anyone that drives a Buick. Do you?

I also don’t know anyone that is a Columbus Blue Jacket fan.

Up until last week I was a USA Today home delivery subscriber since the paper first hit the market in 1982. With publishing deadlines, USA Today has become USA Yesterday. I finally gave it up. I have a feeling a year from today the print edition will be a dinosaur.

Here’s one I wouldn’t have figured out if it wasn’t explained to me. Nevada’s population grew by 2% last year. According to a census official it’s because “more people are moving into the state than moving out.” No kidding?

It’s never a good sign when your personal trainer takes the elevator to the second floor workout level.

Love the shirts a UFC trainer wears at the gym: the first one said ‘Fighting Solves Everything.’ The next day he wore one from his alma mater, the ‘University of Violence.’ When we cross paths, I nod my head hello and keep walking. Very fast.

And speaking of fighting solving everything, shame on Donald and shame on Nancy. Millions of lives are dependent on paychecks they are not getting because of childish bullshit. I’m not smart enough to know the answer but I am sharp enough to know there is one. This just isn’t right.

Stay warm today. Enjoy a second cup of Sunday morning coffee. We’ll back in the spring.