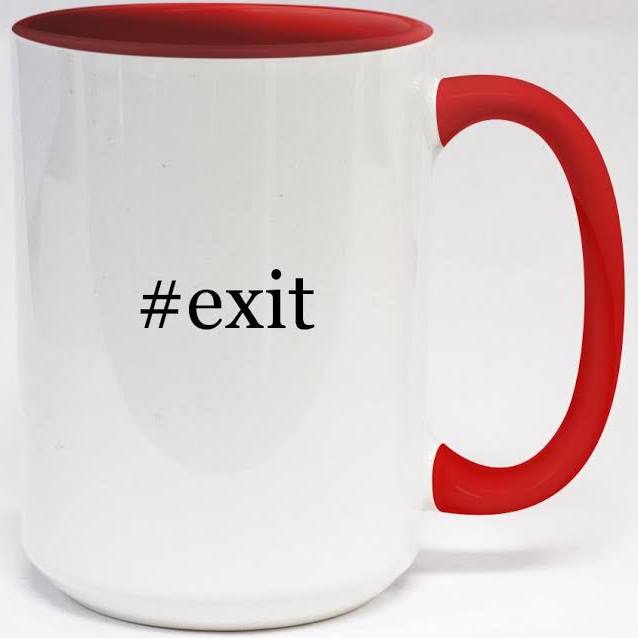 I’ll beat you to it. I’ll admit it. I’m a damn hypocrite.

A week ago in this same Sunday Morning Coffee space I bragged, about as proud as a just being okayed for membership to Mar-a-Lago, that leaving a ballgame was far more important to me than going to one. I got buckets of responses from those who understood and shared the affliction.

And then came perhaps the worst forty-eight hour period of my sporting life. I was there until the bitter end of two games in two days. And not only to the end, but another twenty or thirty minutes afterwards. It’s embarrassing, shameful and flat out hypocritical. Can I ever gain your trust again?

Though I’m guilty, I am guilty with an explanation. Both instances were out of my control. I know that’s scapegoating, but it is what it is. It’s tough to make a quick exit, when you travel with a guy known as Quick Exit, who doesn’t want to live up to his name.

Mat “Quick Exit” Whatley left his own wedding early because he didn’t want to get caught in the processional traffic from the church. He told Kathy he would catch up to her later. A 1981 Alabama alum, he’ll make the fifty mile trip from Birmingham to Tuscaloosa on any given Saturday in the fall, only to be back home to watch the fourth quarter. He (we) missed the fantastic ending of the Alabama-Clemson national championship game in Tampa last year because he didn’t want his private charter to become jammed for take-off among all the other aircraft, whose owners actually stayed to see the end of what became a classic. Quick Exit is (was) my kind of guy.

But this past Monday night he promised we would stay until the end of the Alabama-Georgia SEC backyard brawl for this year’s national crown. He said we would even stay for the trophy presentation if Alabama won. Nobody in our group believed him. His track record was extremely poor which made me really, really happy and hopeful.

Mat, a Medjet partner and special kind of guy, hosted six of us at Monday’s game.  Four rode over to Atlanta with him in his white Yukon XL, which gave him control of the evening’s agenda. His future son-in-law Farra Alford; long-time Birmingham PR guru David Davis and me found seats among the chicken salad and ham sandwiches, chips and large cooler of beverages for the two hour, 145 mile trip due east on I-20. With as much as he piled into the vehicle, minus the ham, he could have catered a bar mitzvah. Meeting us at the game was Farra’s dad, who played basketball at ‘Bama from 1969-73 and my son Scott, who flew in from LA for the night.

Mat, as is typical of Mat, worked hard to make sure everything was perfect. Rank and file seats, going on the open market for about two grand each…forget about it. Mat made sure we were in club seating, which of course included an upscale pre-game buffet and open bar. HIs only stipulation was that he sits in the aisle seat, which is always my quick exit strategy, but I had no leverage to challenge the mandate.

A key part of anyone’s master plan that prides themselves on a quick exit is to make sure parking is not only good and close, but also overly accessible to the main roads to get home. Quick Exit spent more time scouting routes and parking lots than Georgia did on Tua Topogigio. Guaranteed. He finally settled on a location about a quarter mile east of the new Mercedes-Benz Stadium, which is probably a bit overrated as a sports palace, but by no means a shithole.

We arrived just a wee bit early because to Mat, and I fully understand it, parking is more important than the event itself. The game, an 8:15 pm eastern start, put us on the road to Atlanta at noon central, 1 pm eastern. We pulled in to the West Mitchell Street Christian Methodist Episcopal Church off Martin Luther King Blvd at 3:15 pm, just a few minutes before kick-off.

No surprise that we were the first vehicle in the church lot. Mat gave the parking attendant, sitting in her car because a lovely 37 degree drizzle started falling, the $50 for parking and then another $50 as a Happy New Year gift; this, to a person Quick Exit had never seen before. He also slipped her a chicken salad and two ham sandwiches which lit her up like some of the discarded Christmas trees laying on the street. It also granted us much needed church restroom privileges.

Scott got into the city from the airport at about the same time we did. Scott went to high school in Birmingham and despite me wanting him to go to business school at Alabama, he opted for the hotel management program at UNLV. Today he oversees operations at a very upscale luxury hotel in Beverly Hills where he’s been for a dozen years. Robert Young nee Jim Anderson not withstanding, Scott proved father doesn’t always know best.

Going to UNLV you need a real college football team to root for so becoming a Bama fan when we moved to BHM in 1999 was easy for Scott. Not so much for my nephew Kyle, who came in to ATL from Long Island for the game. Kyle, an insurance underwriter in NYC, went to the football powerhouse that is Cortland State and listens to the Paul Finebaum podcast on the Long Island Rail Road on his way home each night. Nobody else on the train has ever heard of Finebaum. Kyle, influenced by his favorite uncle, adopted Alabama as his team. He never expected me to say “yes” when he asked if I could find him a ticket for Monday night. Roll Tide.

When Georgia went up 13-0 at halftime I looked at Mat for perhaps a sign he was reconsidering his stay-at-all-costs-to-the-end decision. He looked at me and then looked down. Bama’s offensive ineptitude was tough to take, good parking spot or not. However, I had a feeling we were close to being cleared for departure. Not even someone named Kendrick Lamar, mouthing words we couldn’t understand, took Quick Exit’s mind off what happened during the first thirty game minutes.

The Georgia rooters, about 70% of the stadium, were giddy and a bit obnoxious. Being an Alabama fan is like being a Patriots fan. You may get a little love at home but the rest of the world treats you like cold chili and warm beer. The Georgia fans learned no lesson from the 21-3 lead the Falcons had at the same point of the Super Bowl a year ago. Once again, they were celebrating at halftime. 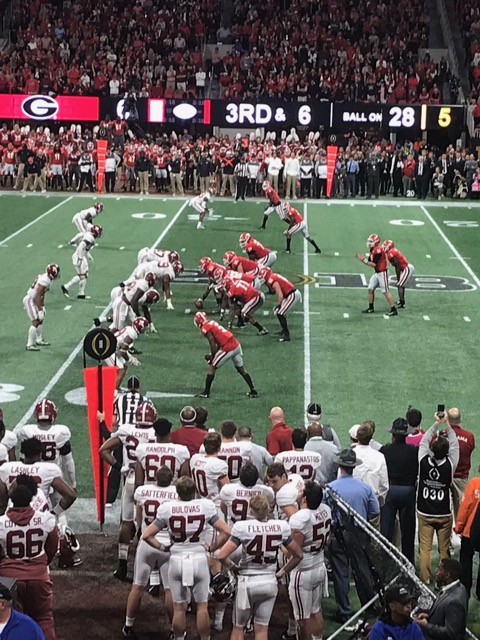 A first half Alabama yawner turned into an overtime thriller.

During the intermission my phone started vibrating like my table was ready at Outback. Messages were either “Are you still there?” or “Have you left yet?” My answer was either, ‘yes, but not for long’ or ‘no, but soon.’ At least a dozen people read Sunday Morning Coffee from the day before.

Trailing 20-10 after the third quarter, I could already taste those stale chicken salad sandwiches on the way home. I looked down the row at Quick Exit. He gave me a glance and looked away. That’s when I knew I might be in trouble and in it for the duration.

If you are a Georgia football fan, the game should be three quarters and done. The Falcons led 28-9, the Bulldogs 20-10, after three. Two championships only fifteen minutes away. The longest fifteen minutes for peach-staters this side of a Jimmy Carter State of the Union speech.

Then the ‘Bama magic started to happen. I was really glad for Scott, who believed a Alabama comeback might actually happen. I wasn’t as sure. As a Jets fan, this is probably as close as Scott will come to a football championship, at least in my lifetime. I wanted to share it with him. For me, it was my last Alabama game as a state resident before we roll up the rugs with a planned mid-year retirement and relocation to the Mountain West Conference. 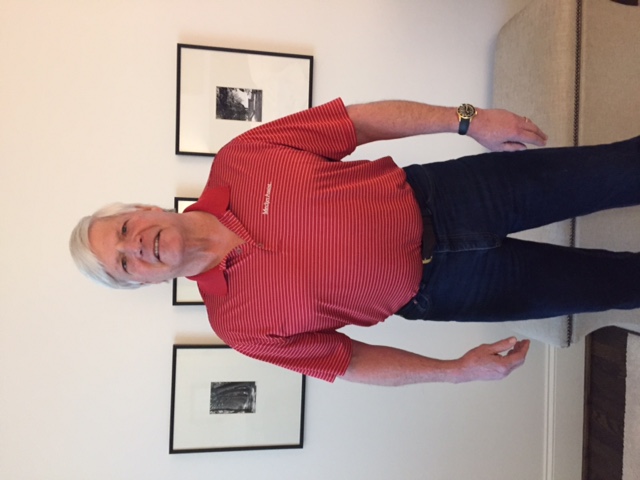 Mat Whatley, Quick Exit, was No Exit on Monday night!

As the fourth quarter clock ticked down it was getting too probable to let it slip away. Georgia fans got very nervous and very quiet. Quick Exit became No Exit.

It was now obvious I was there until the end. That meant two games within forty-eight hours of each other and I was staying the duration of each. I began to hate myself. Two days before, Andi and I were guests of Coach Rob Ehsan and the UAB basketball team on their two-game trip to Miami. There was no way to leave the Saturday night game against FIU early. I didn’t have the keys for the bus to the airport or the team airplane home. Do airplanes need keys? So we stayed and enjoyed our eleven point win. Getting to the bus early meant having first choice of pizza before the players arrived, but I knew it was something my cardiologist would frown upon so we hung around the arena for thirty minutes watching the cleaning crew shovel popcorn. I never expected to be doing it again a couple of nights later.

When Tua hit DeVonta Smith, freshman to freshman, for the overtime game winner Scott and I grabbed each other. David Davis, my PR seatmate, had the inbred knack to snap the picture at just the right moment. It’s a frame that can’t be posed. 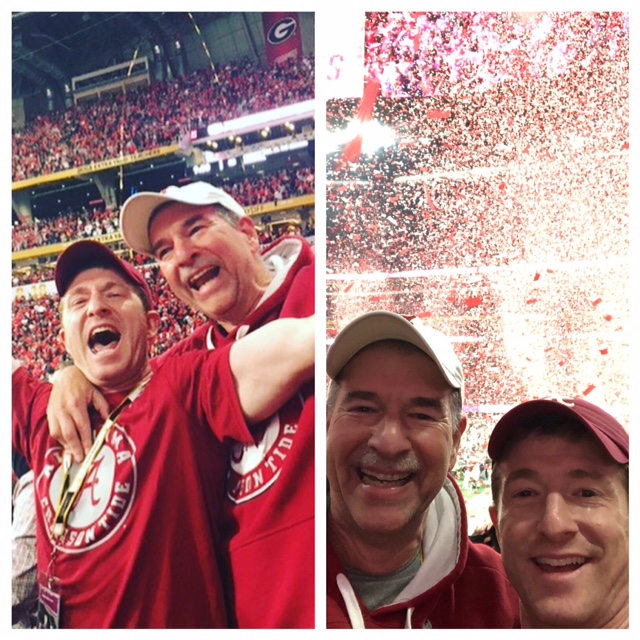 David Davis caught this real time classic of me and Scott as Alabama scored the game winner. Falling confetti proves to the sceptics I was there at the not-so-bitter end!

And once overtime ended Quick Exit became Slow Exit. Mat wanted to revel in the confetti for another twenty minutes.

With the Georgia crowd now gone, and humbled after the Falcons and Bulldogs were outscored a combined 41-3 in the fourth quarter and overtime, getting out of the church lot was a breeze. Mat’s getting home game plan had us hopping over a traffic median or two to head west on MLK Boulevard to pick up I-20 noshing on ham and chicken salad celebrating Alabama’s 17th national championship.

It was smooth sailing out. So smooth in fact that David said, “Mat, I think you just missed the entrance to the interstate.” Quick Exit then became Sgt. Carter, barking instructions: “Farra get on Waze; Roy go to Google Maps; David talk to Siri and find out where the hell I am going!” He was a lot calmer when the Tide was down 13-0. We were in shanty town, not so much hoping to find I-20 as we were hoping the Yukon would just keep running and get us out of wherever we were.

Two hours later, 1:30 am central, a time better suited for waking up than lying down, we were home. I hate to admit it but I will: staying to the end, at least of this thriller, was fun.

By no means, however, will it become habit forming.