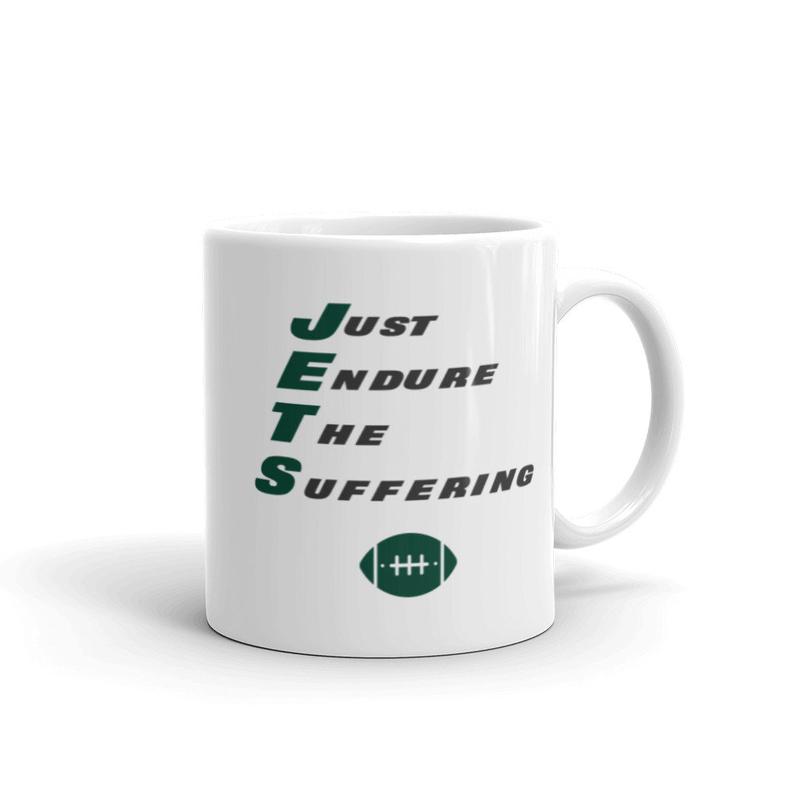 Things change. Just like that — you go from your first cigarette to your last dyin’ day.

Once upon a time, way back in the olden days, before the surgeon general’s warning was printed on every pack of cigarettes, the New York Jets spoiled every Jets fan. We couldn’t have known that flash of success was destined to last a lifetime. We didn’t know, long term, like smoking was to the lungs, that being a Jets fan could be hazardous to our mental health.

As the sun set on Miami’s iconic Orange Bowl, late in the afternoon of January 12, 1969, the Jets pulled off the greatest big game upset in professional football history with a 16-7 win over the mighty Baltimore Colts. 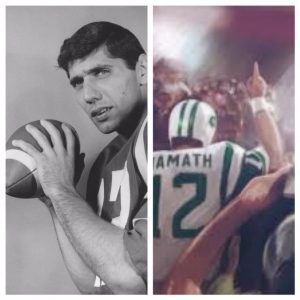 Joe Namath, the Jets phenom quarterback playing in his fourth season, guaranteed the win three days earlier at a media luncheon. The press figured Namath got to the bar early. That wasn’t unusual. The Jets, 11-3 during the 1968 season, were a whopping 18-point underdog to the Don Shula coached 13-1 Colts. It was an easy cover. Namath was the game’s MVP and with it got the keys to a Dodge Charger and the promise fifty years later he would be the spokesperson for the Medicare Coverage Hotline.

Prior to the Jets’ victory only one other team had ever won a Super Bowl. The Green Bay Packers won the first two AFL-NFL Championship games the previous two years. Technically, Super Bowl III as the 1969 game had been dubbed, was the first Super Bowl as the name was first trademarked that season.

We had high hopes that Super Bowls would be as common for the franchise as a Namath dalliance but since then we’ve gotten nothing. Now all of us are a lot closer to our last dyin’ day than that first cigarette, which for me was a Bull Durham, a year or two before Namath’s memorable trot off the Orange Bowl field with his right index finger wagging in the air leaving no doubt who was number one. It would be the first and last time for the green shirts.

In 1957 Stephen Sondheim wrote the words and Leonard Bernstein composed the music for the stage production of West Side Story. It gang warfare, the Jets and the Sharks. The score was written three years before the New York Titans were born in the upstart American Football League, and six years before they were renamed the Jets in deference to their brand-new home, Shea Stadium, just off the runway of LaGuardia Airport.

When you’re a Jet
You’re the top cat in town
You’re the gold medal kid
With the heavyweight crown.

No, none of us thought we’d never go through life again experiencing that feeling we did in 1969. I was only sixteen and figured we had a lot more days like this in front of us. Damn Jets.

Today, fifty-one years later, the damn Jets just finished their second worst season in history with a won-loss record of 2-14. That doesn’t sound as bad as it really was. The worst team the Jets ever fielded was 1-15 in 1996, when our first cigarette was still closer than our last dying day.

When you’re a Jet,
If the spit hits the fan,
You got brothers around,
You’re a family man.

Well, the spit hit the fan this year. Cruising with an 0-13 record and a direct path to the first pick in the NFL draft, with can’t-miss-quarterback Trevor Lawrence of Clemson waiting as the top prize, the Jets went on to win two of their last four games seceding the first pick to 1-15 Jacksonville. By winning, the Jets became losers. Only the Jets. With deference to the Broadway songwriters Sondheim and Bernstein, the shit hit the fan.

Sure, the Jets have selected first round quarterbacks before: Richard Todd, Ken O’Brien, Chad Pennington, Mark Sanchez and the present two-win incumbent Sam Darnold. But Lawrence was supposed to be a franchise changing quarterback the same way Namath was.

And just to add a bit more insult to the season, with Cleveland in the playoffs tonight, the Jets now have the longest non-playoff streak of any team in the league at nine years. The Bengals, Chargers and even the Lions have been there since. Woe is us. 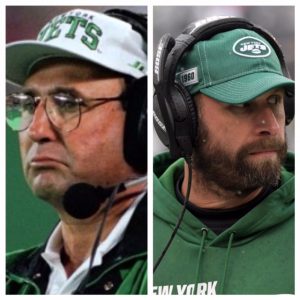 Then following the season finale last Sunday, a 28-14 loss to the Patriots, the Jets fired head coach Adam Gase even before the soap got wet in the shower. This is the same Gase who should have been fired somewhere during the 13-game losing streak; instead, he finished red hot with two wins in four games which, by percentage of those four games alone, makes him the third winningest coach in Jets history, seemingly good enough in Jets-land for a contract extension. Instead, he got the door.

Gase, 9-23 in two seasons, wasn’t the worst coach in Jets history. That honor belongs to Rich Kotite, architect of the 1996 one-win campaign, who posted a 4-28 record before the shower water was shut off.

Weeb Ewbank, not the host of The Newlywed Game, was the only coach who brought us to the promised land. Since the ‘68 season and ‘69 Super Bowl, nothing. The misnamed Charley Winner succeeded Weeb and with a record of 9-14 he was anything but his namesake. Then Ken Shipp, Lou Holtz, Mike Holovak, Walt Michaels, Joe Walton, Bruce Coslet, Al Groh, Herm Edwards, Eric Mangini, Rex Ryan, Todd Bowles and the now dethroned Gase. Of those only Groh at 9-7 had a winning record; he split after a season to be the head coach at Virginia. We did have a few guys who went on to success elsewhere. Pete Carroll was 6-10 in 1994; Bill Belichick took the job in 2000 for one day. Yep, one day before emerging from his stupor and heading to New England. He’s only won 17 AFC East titles and six Super Bowls since. The winningest coach in Jets history is Bill Parcells who was 29-19 in three seasons and the second coach in Jets history, along with Groh, with a winning percentage over .500. And that’s in sixty years.

And to make the future look even worse, Jets owner Woody Johnson returns to the country after serving three years as the Trump administration’s ambassador to the United Kingdom. Widely known as one of the worst owners in sports, he’ll be on hand to help with what no doubt will be another botched head coaching search. You’d think Johnson would have found a few minutes to ask Trump to pardon the Jets for their two wins and restore the number one draft choice. Sure, the Jets record was egregious but not a hell of a lot worse than some of the thugs the president sprung free.

So, who wants this awful coaching job? Do we get a recycled former head coach or a highly touted up and coming assistant who soon becomes overwhelmed with the mission? While this won’t happen, the Jets, damn Jets, coaching search should begin and end with Clemson’s Dabo Swinney. At 51 he’s mature yet young enough to relate to the players. With two national championships he’s accomplished enough to command respect on his first day in the locker room and his native Alabama drawl is country enough to charm the prickly scales off the ruthless New York media. The guy flat out is a winner and knows how to coach. Dabo was born in 1969, that special year in our Gang Green hearts. An omen if there ever was one. And if it doesn’t work, which it won’t because the Jets are the Jets, Swinney can always do what his buddy Nick Saban did in 2005 after he decided coaching the Miami Dolphins is not what he wanted to do— head back to college. Reportedly, Saban has done okay for himself since.

Here come the Jets
Like a bat out of hell
Someone gets in our way
Someone don’t feel so well!

That snappy little tune carried us through the post-Super Bowl winter of 1969. Jets fans, a minority in New York to the Giants, could finally walk as tall as Buford Pusser in Queens and on Long Island, proud of our guys. Namath, Snell, Boozer, Lammons, Sauer, Maynard, Plunkett, Sample, Philbin, Beverley, Grantham, Turner, Hudson, Hill, the whole bunch of them. Giants fans went underground; they ran and hid because this was finally our town. It was fun for the year it lasted. The 1969 Jets regular season, at 10-4, was respectable. Then the Chiefs grounded us in the playoffs ending our one-year reign for what has been forever. Since then, the only time the Jets ever got to the Super Bowl was with a ticket. 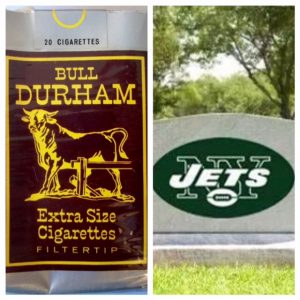 So now with our presumed franchise quarterback looking for an apartment in Jacksonville; the Jets getting ready to hire another mistake as head coach and then pay him to go away a couple of years later; and the reappearance of an owner who knows more about Brexit than the AFC East, our dying day dawns a lot closer than an index finger wagging through the air in early February.

It’s enough to drive an old guy to reach for another Bull Durham.