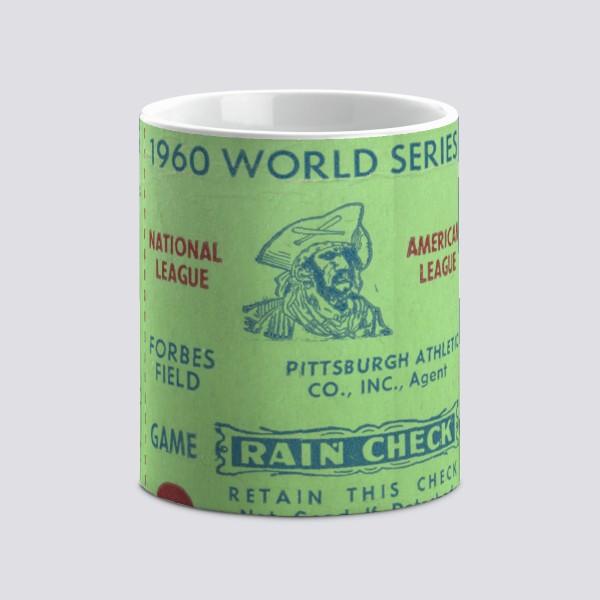 We have very little in common. Come to think of it, we actually have a lot in common.

Vernon Law will celebrate his 90th birthday next month. I’ll be 68 in May.

Ten years ago, Law, the show-off, had a seven coronary artery bypass. Two years ago, I only had a cinco de bypass.

Law is a devout Mormon. I am a high-holiday Jew.

Law still has a head full of wavy gray hair. I once wore an Afro.

However, our lives did intersect on the same day: October 13, 1960, a day neither one of us will ever forget.

Improbably, it was Game 7 of the 1960 World Series. Improbable because the mighty Yankees were supposed to beat the upstart Bucs in four easy games and never get to a Game 7. Despite losing three of the games by predictable scores of 16-3, 10-0 and 12-0, the Pirates scraped out wins of 6-4, 3-2 and 5-2 in the other three setting up Game 7 with Vernon Law pitching for the Pirates and Bob Turley for the Yankees. Law also started Games 1 and 4 of that Series and was credited with the win in each game.

That year, 1960, Law won the Cy Young Award as the best pitcher in the National League with a record of 20-9. That same year I got the Citizenship Award as a second grader at Meadowbrook Elementary School. I still don’t know what it means.

So, while Law was pitching Game 7, I was squirming in school trying to get a pass to go to the bathroom as often as I could with a late developing case of a stomach bug. The remedy was getting into a stall and plugging the transistor radio earpiece into my ear to see how my Pirates were doing.

My first major league game would be the following year but at that young age I was mesmerized by the sport because my 32-year-old was, too. Baseball was the national pastime in the 50s and 60s. I knew the Pirates playing in the World Series was big stuff, because Dad told me so. I knew I had to rush home and leap off the school bus to watch the end of Game 7.

Vernon Law was one of my earliest idols. He was the best pitcher on my team. Even then, at eight years old, I knew all the players’ names on the Pirates. My parents always told me they wished I knew my math as well as I knew my Pirates. Everyone called Mr. Law ‘The Deacon.’ I had no idea why, nor had I ever heard of the LDS Church, not on Long Island anyway.

Two weeks ago, I spent seven days with Mr. Law at Pirates Fantasy Camp in Bradenton, FL. He was the guest of honor celebrating the 60th anniversary of the 1960 World Series. Nine of the 25 players from that team are still with us. Law was the only one able to make it to Bradenton.

Fantasy camps are casual affairs, where the campers and ex-major leaguers mix for the week at meals, over cocktails, and on the field. Of the hundred or so wannabes at Pirates camp, maybe a dozen of us remember 1960 and Mr. Law in his prime. That made spending time with him even more special.

At 89 he is still in good physical shape and sharp as a Gerrit Cole fastball on the outside corner. He stays active back in Provo, Utah, walking, gardening and golfing. In fact, just two years ago he finally stopped throwing batting practice at BYU and local high schools because, as he said, “Home plate kept getting further away from the mound.”

He loves holding court at fantasy camp and telling stories. Those listening enjoy it even more. The camp brass put together last minute plans for a 1960 World Series Game 7 watch party hosted by Mr. Law. I had a dinner engagement scheduled for that night but quickly scrapped it. I figured I’d probably never get this opportunity again.

There we were, about 40 of us in a lounge/conference room. Four ex-major leaguers couldn’t resist either. Al Oliver and Richie Hebner won Series rings with the Pirates in 1971. Oliver was a seven-time all-star and won the National League batting championship in 1973 hitting .331. Manny Sanguillen was a three-time all-star and two-time World Series Champion with the Pirates in ‘71 and ‘79. Doug Drabek was also there. He won the Cy Young Award in 1990, thirty years after Mr. Law did. 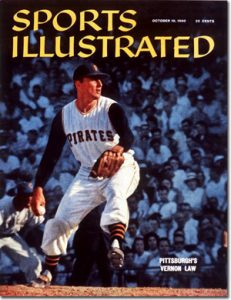 The Deacon gave a wonderful, historical and motivational opening overture. Though soft-spoken at times, I was only about ten feet from him and hung on his every word. He reminded us two things happened in that World Series that had never happened before or since: Game 7 was the only World Series game in history that didn’t have a strikeout and the MVP of the Series, Bobby Richardson, was the only one who ever came from the losing side. Mr. Law had fairly good recall of game circumstances- sometimes he even remembered the exact pitch he threw in certain situations. When Pirates manager Danny Murtaugh came out to the mound to replace Mr. Law in the sixth inning, he didn’t say a word to his boss other than hand him the baseball and wait for his reliever Roy Face to arrive.

Somehow the Pirates, in spite of Mantle, Maris, Berra, Skowron et al in the other dugout, were leading 4-1 in the sixth inning of the deciding game at Pittsburgh’s quaint Forbes Field. There were two Yankees on base when Murtaugh gave Law the hook.

“If Danny would have left me in, I could have gotten out of that jam,” Law said. “I had been doing it all season.” His numbers don’t lie. During the 1960 campaign Law started 35 games and completed 18 of them. Back then nobody counted pitches. You threw until you couldn’t throw anymore. Incredibly, in 1955 Law pitched 18 innings on a Tuesday night allowing one earned run. The Pirates won it in the 19th. Five days later he threw ten more innings, gave up two runs, and got the win. That stuff doesn’t happen these days. In fact, in this big money era, it never will again.

Maybe Murtaugh knew Law injured his ankle two weeks earlier as the Pirates won the pennant in Milwaukee. Law took every safeguard he could to avoid any celebratory horseplay and even left the victorious locker room early so “I wouldn’t get any alcohol tossed on me.” What he didn’t count on was his teammates taking the party onto the team bus and in the ensuing mayhem somebody twisted his ankle until he heard it pop. Law couldn’t push off the mound with his normal motion and was hobbled during the World Series and, in fact, for the next three seasons.

Murtaugh replaced Law with ace reliever Face who won 19 games the previous year out of the bullpen. A number of those wins were the result of Face giving up the lead and his teammates bailing him out. Same formula happened that 1960 day. Face gave up a run scoring single to Mickey Mantle and the next hitter, Yogi Berra, connected on a three-run homer to put the Yankees ahead 5-4 and remove Law as the winning pitcher of record. The game seesawed back and forth and was tied 9-9 in the bottom of the ninth.

I leaped off the school bus and crashed through the screen door of my house just as I heard the Yankees didn’t score in the top of the ninth. My mother had to think something was wrong but she was in the kitchen wrapped up in ‘As The WorldTurns’ so I raced down to the den, waited for the damn TV set to warm-up, and in black and white saw Ralph Terry’s first pitch to second baseman Bill Mazeroski in the bottom of the inning. Outside and high, ball one. 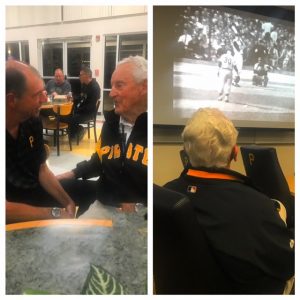 Talking about and watching the 1960 World Series with Mr. Law.

His second pitch changed the lives of both me and Mr. Law. Mazeroski launched it over Yogi’s head in left field and the celebration began. We win 10-9!

I ran outside and started running in a circle like Mazeroski did. Mom didn’t budge from the kitchen television with the rabbit ears. I ran around like a lunatic. Law on the other hand watched from the Pirates’ dugout and went right down to the clubhouse because he didn’t want to be a part of the mayhem on the field.

Vernon Law and I had something in common. He got a World Series ring. I waited impatiently at the living room bay window for Dad to come home. Finally, the black 1956 Hudson Hornet came into view. I ran outside and gave him a hug just like my heroes had done in Pittsburgh a few hours earlier. Dad hugged me back just like I saw on television. After all, we were now World Champions, too!

It was a moment I will never forget, nor did I think it could get any better. Except I never counted on one more thing happening — Vernon Law telling me about it.